In its competition debut with JD Classics, our customers Bentley 4 ½ is this weekend competing in the Motor Racing Legends Pre- war sports car race; a first for car, driver and team. For all sports cars built before 1941, the series showcases an array of famous pre-war marques including Alfa Romeo, Lagonda and Talbot amongst others and with all cars close to their original production specification, the series makes for an impressive show. Run on behalf of and raced by our customers, the Bentley proved an impressive sight with a lot of attention from spectators and car enthusiasts alike as the team prepped the car for Friday morning’s 30-minute session. 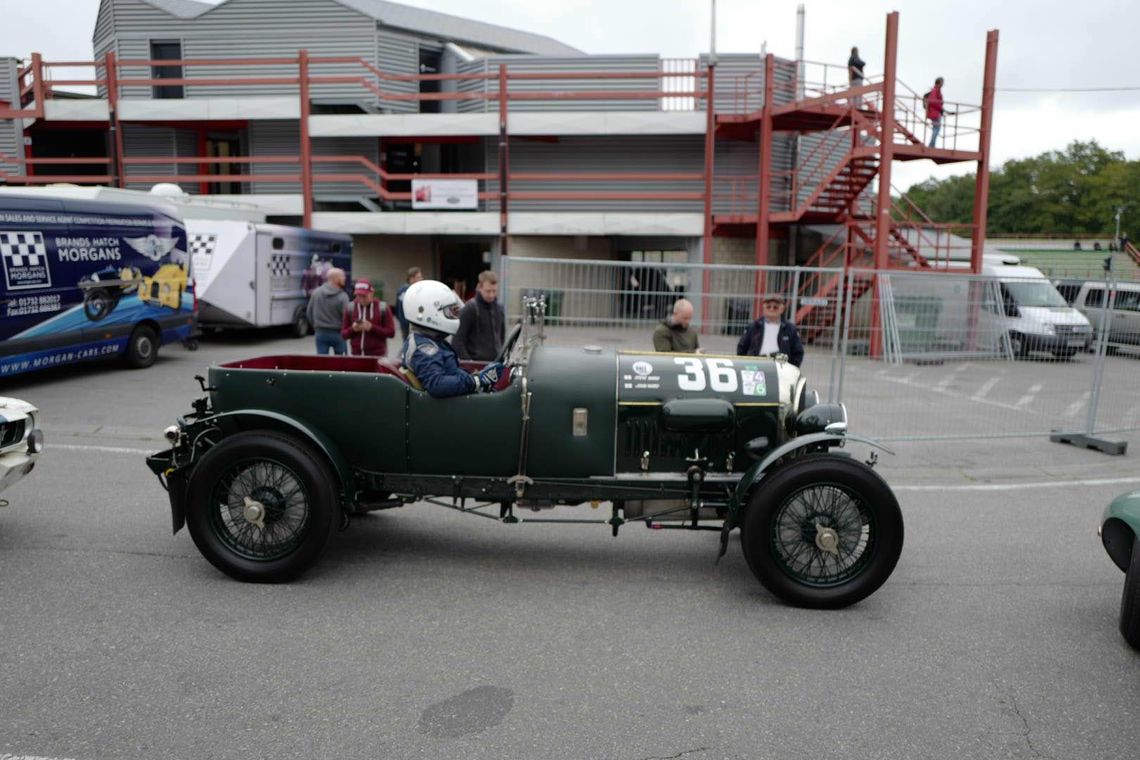 In its competition debut at the Spa Francorchamps circuit, the Bentley 4 1/2 took part in the weekend's Pre-war sports grid.

Having run well at last weekend’s Goodwood Revival, the Ecurie Ecosse Jaguar XK120 ‘LXO 126’ is also participating in this weekend’s combined Woodcote/Stirling Moss Trophy which, alongside the also customer owned Lister Knobbly which will be piloted by Chris Ward, complete the weekend’s line-up at the Spa Six Hour meeting.

With a vast field of over 60 cars making up the varied grid of both pre-1956 and pre-1961 sports racing cars, the competition was set to be fierce with an array of D-Types, Lotus’s and Austin Healey’s amongst many other varied marques making up the grid. Unusually for the notoriously rainy circuit, conditions were dry and sunny ahead of the 35-minute qualifying session, however no longer than half way around the first lap was the first red flag of the session produced and the grid were quickly summoned back to the pit lane whilst the stranded Lotus was retrieved from the gravel at Les Combes.

With 28 minutes remaining, the session resumed with both cars performing well and the Lister Knobbly of Chris Ward jumping from 36th place on Lap 2 to 3rd by lap 3 with an impressive time of 2:50.6. An Elva MKV losing its bonnet on the fast run through Eau Rouge on Lap 5 meant the session was once again red flagged. Restarted with just over 15 minutes remaining, both cars continued to battle their way through the field with the Lister Knobbly qualifying in 3rd place overall and the Ecosse XK120 in 42nd overall and 16th within the Woodcote Trophy grid. 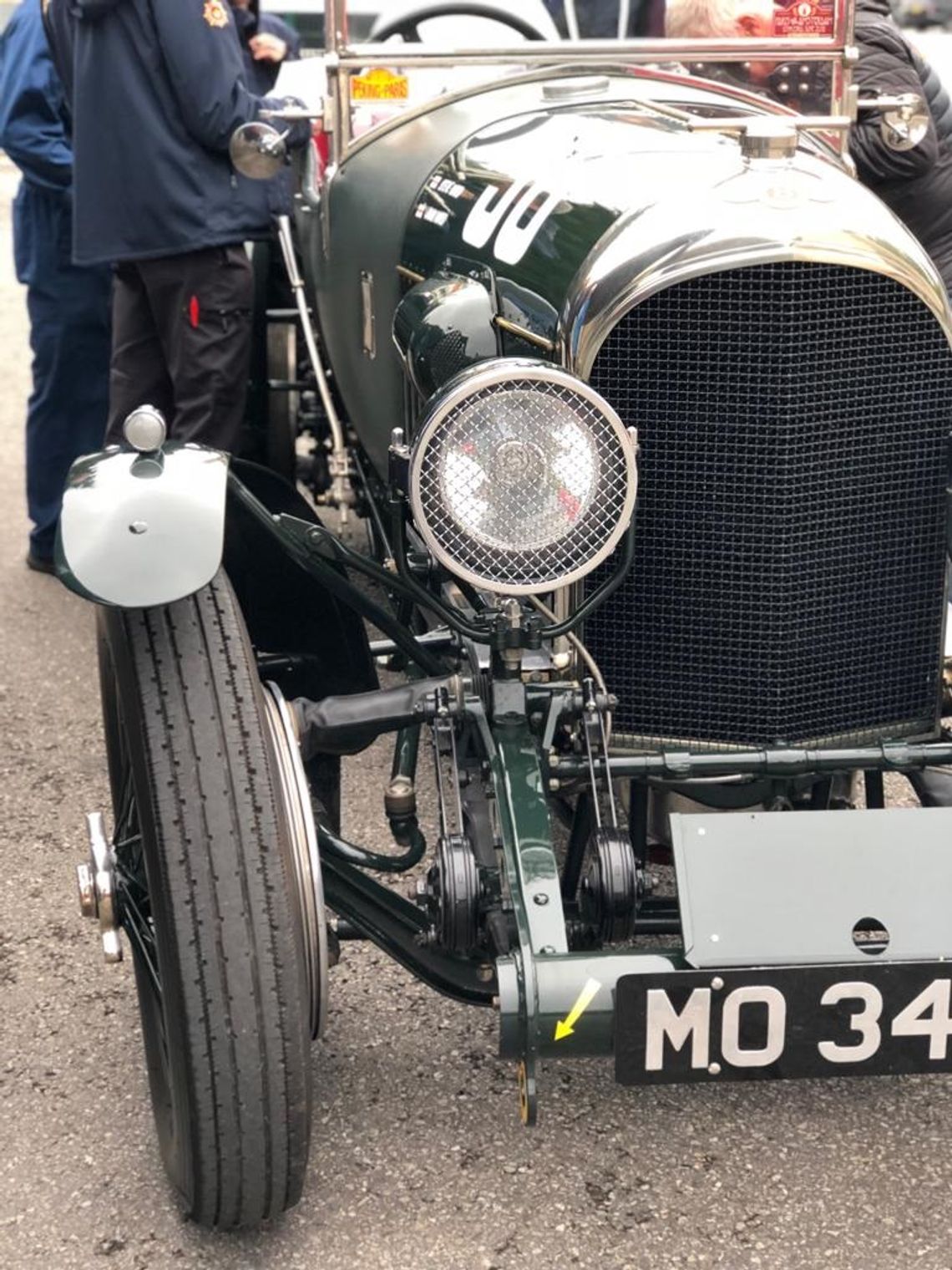 Our customer owned and JD Classics prepared Bentley 4 1/2 getting a final check over before the start of the weekend's Pre-war sports race.

Starting from 33rd on the grid for Friday evening’s Pre-war race, the cars were led round to a rolling start and down into La Source with the Bentley getting off to a flying start and gaining position by the first corner alone. A promising start for the new addition to the grid, the lap times continued to improve as the car made its way through the field having already gained 5 places by the time the pit window opened. Unlike the usual 60 second stationary stop, the pre-war grid had to complete just 15 seconds stationary which proved just enough time for a driver changeover before the Bentley re-joined the race maintaining its position of 28th. Now in the hands of its second driver, the Bentley continued to turn up the pressure knocking over 17 seconds off the previous day’s fastest lap time in qualifying to produce an impressive 4:01.8 and complete the race in 25th place.

Another uncharacteristically dry day at the iconic Belgian circuit, the combined Woodcote/Stirling Moss Trophy gridded up ahead of the 61-minute race with the Lister Knobbly of Chris Ward on the second row of the grid in 3rd place and the Jaguar XK120 of Steve and Josh Ward in 42nd.

A rolling start and the field left the grid with the Lister Knobbly gaining a place by the first corner and by Lap 3 had claimed the lead from the pole sitting Lotus 15 of Ollie and Graham Bryant. As the Lister continued to tussle back and forth with the pursuing Lotus, unfortunately the Jaguar XK120 fell victim to a clutch failure and so was forced to retire in the early stages of the race. 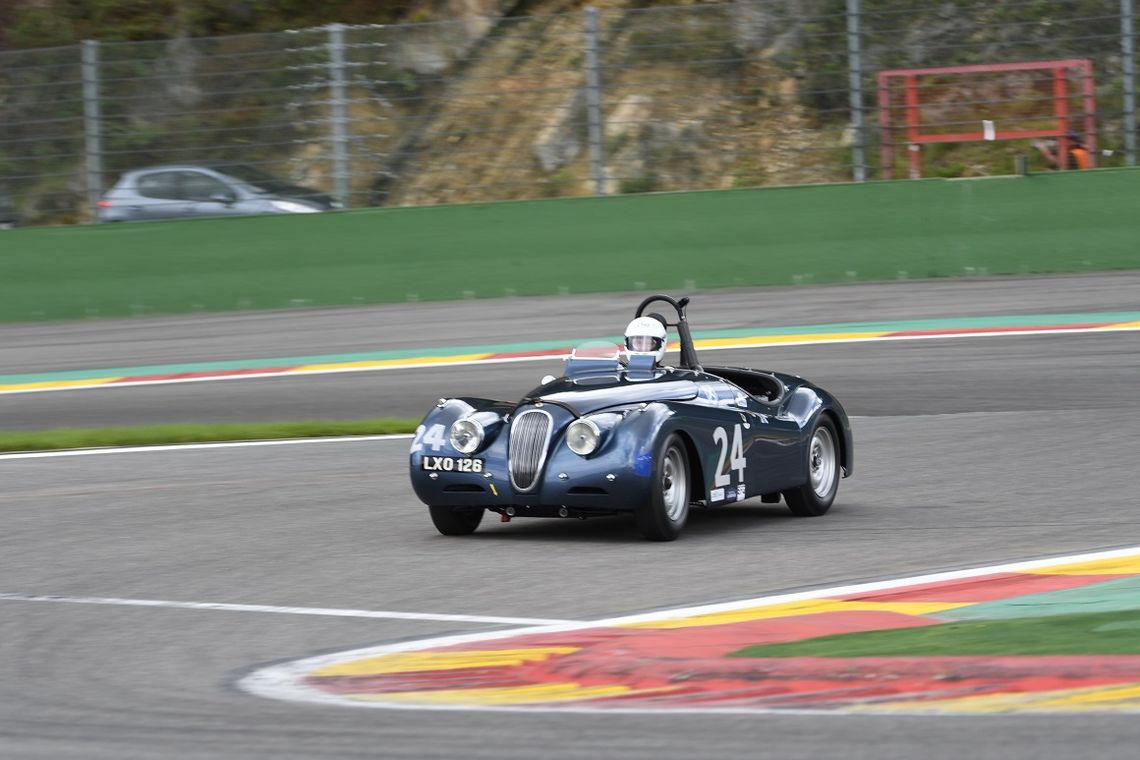 Having qualified in 42nd place, the Ecurie Ecosse Jaguar XK120 fell victim to a clutch failure and was forced to retire from the combined Woodcote/Stirling Moss Trophy

The two front runners continued to exchange first and second place up until Lap 5 when the Lotus made its break and began to pull away from the JD Classics prepared Knobbly. With just over half of the race remaining, the pit window opened and the field began to disperse as cars came in to make their mandatory pit stops. The Lister Knobbly was the first to pit of the front running cars and having completed the stop faultlessly re-joined in 7th place.

As the field continued to enter the pits, it wasn’t long before Chris Ward was back at the front of the grid making good his escape as he began to pull away from the rest of the grid. Having built up a gap of 55 seconds between himself and the now second placed Lola MK1, the deployment of the safety car on lap 16 grouped the field back together thus losing the Knobbly’s strong lead, however in spite of this the Knobbly maintained position to take an exciting victory in the Spa Six Hours running of the combine Woodcote/Stirling Moss Trophy. 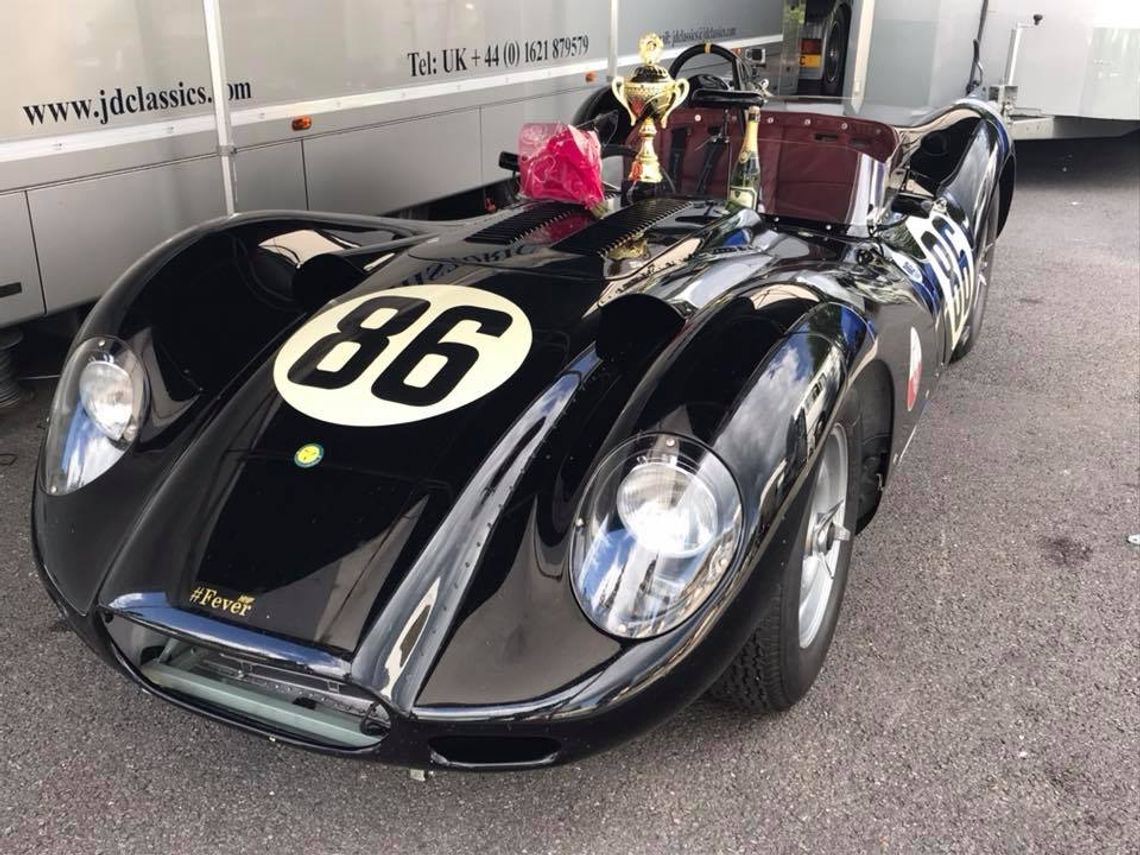 Having battled in the early stages with the Lotus 15 of Ollie and Graham Bryant, the JD Classics prepared Lister Knobbly drove and exciting race to victory in the Motor Racing Legends series.