Fresh from a busy Le Mans Classic at the beginning of the month, the JD Classics team readied themselves for another weekend of high octane action preparing and campaigning three customer cars at the weekend’s Silverstone Classic.

Friday morning and the second session of the day saw the 39 Stirling Moss Trophy cars depart from the National (old Formula One) pits for their 27-minute qualifying session.
Owned by an American customer and driven by JD Classics resident driver Chris Ward, the Lister Knobbly achieved a first flying lap of 2:29.4 to qualify in 5th place. With just another two laps, the Knobbly had quickly moved up the field and now in 2nd place having shaved over 4 seconds off the car’s first lap time. Coming into the pits on Lap 6, the team quickly checked over the car before it headed back out to join the field. Having achieved another four laps and another best time of 2:24.3, the Lister Knobbly maintained position to qualify on the front row of the grid ahead of Saturday’s race. 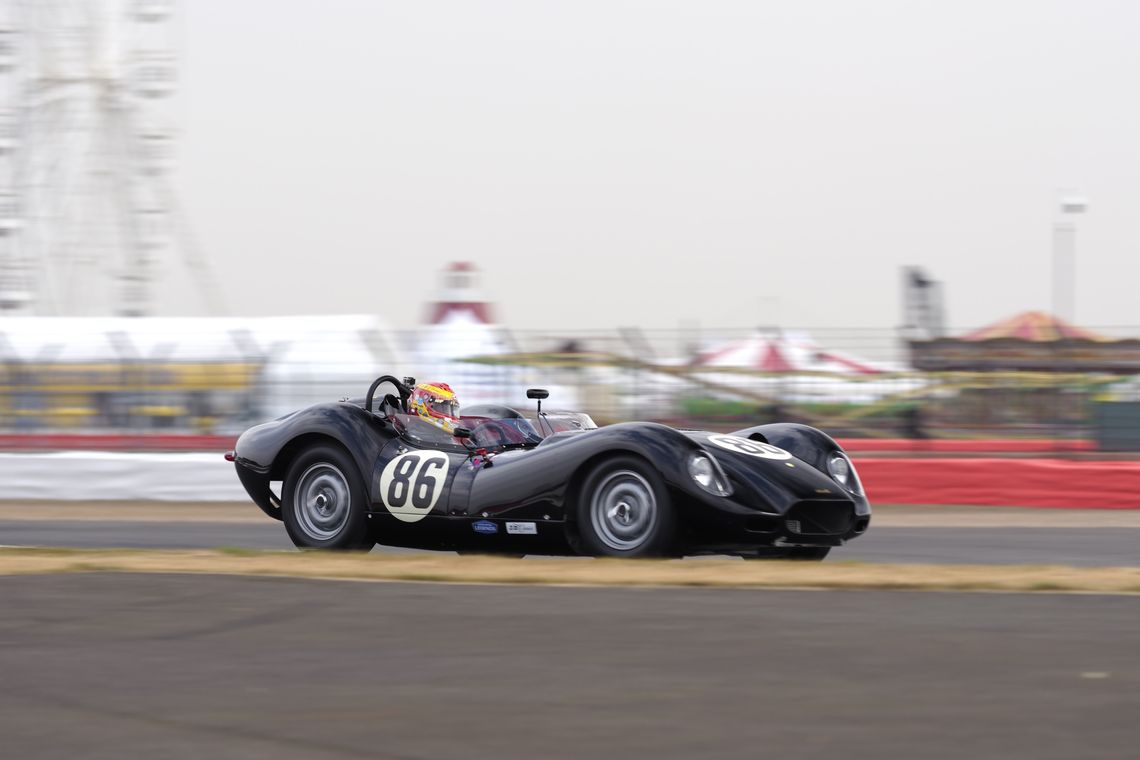 The Lister Maserati of Nick Riley and Ecurie Ecosse XK120 of Steve and Josh Ward completed the weekend’s lineup at this years Silverstone Classic as both cars competed in the weekend’s RAC Woodcote Trophy. With a field of 34 fellow pre-1965 sports cars making up the extensive field, competition was fierce with cars such as Ferrari’s, Austin Healey’s and Aston Martin’s comprising the grid. Steve Ward took the first half of the session and completed two flying laps before pitting thus allowing Josh Ward to finish the rest of the session. A solo drive this weekend for Nick Riley in the Lister Maserati saw the car consistently improve on each lap time throughout the session and with a fastest qualifying time of 2:43.8 qualified the car in 23rd place for Sunday’s 50-minute race. Similarly, Josh Ward also continued to eat time out of every lap and a 2:43.9 on the last lap qualified the car in 24th place. 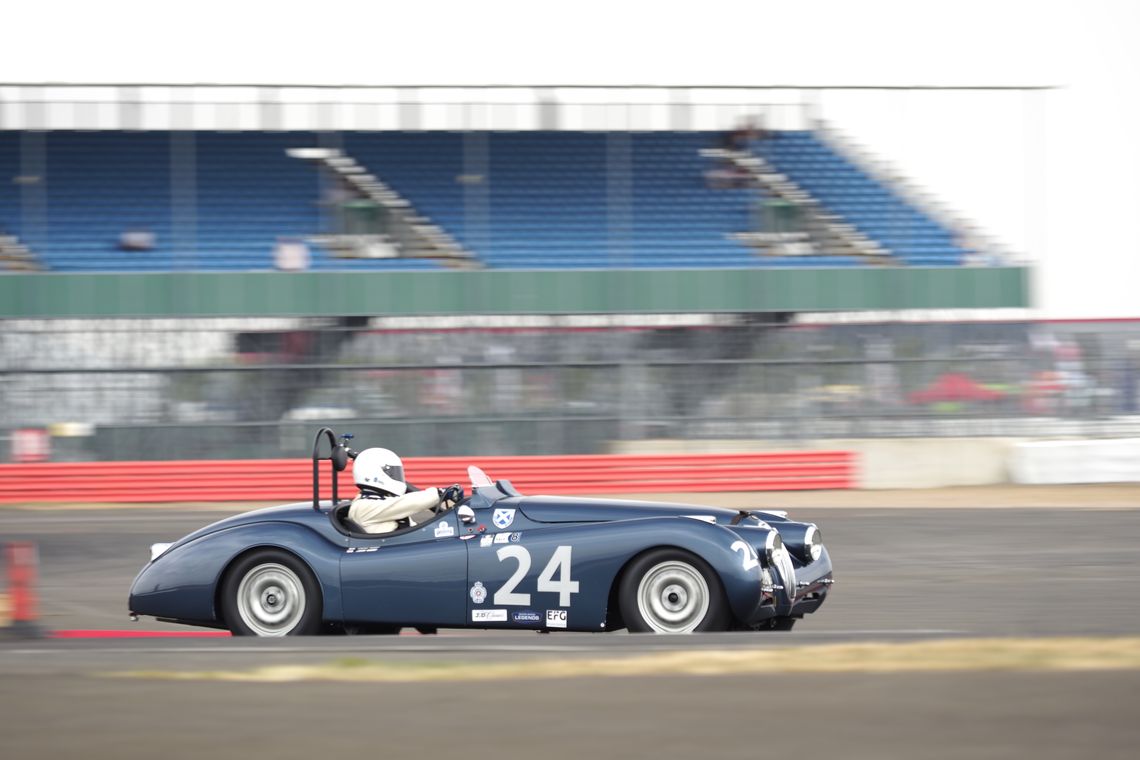 Steve and Josh Ward qualified in 24th place ahead of the weekend's RAC Woodcote Trophy race.

Lining up on the front row of the grid, the JD run Lister Knobbly sat alongside the pole sitting Lotus 15 of Roger Wills as Saturday morning’s 50-minute Stirling Moss Trophy race got underway. With the Lotus getting off to a flying start, the front runner slowly but surely began to pull away from the pursuing Chris Ward in the Knobbly. Responding to the pace set by the leader, Chris Ward spent the following laps in hot pursuit gradually closing the gap between the two battling front runners.

Lap 11 and with the pit window open, the Knobbly came in for its obligatory stop. Ahead of the rush, Chris Ward completed the pit stop seamlessly to re-join in an initial out lap position of 8th place but still with the majority of the field to pit. Another three laps and the Knobbly was running in 2nd place chasing the now front running Lotus XI of Andrew Kirkaldy and Sandy Watson. Having yet to complete the pit stop, the Lotus XI made a last minute dash into the pits just ahead of the window closing and with a clear track ahead of him, Chris Ward charged the customer owner Knobbly through to victory almost six seconds ahead of the pursuing fellow Lister Knobbly of Tony Wood and Will Nuthall. 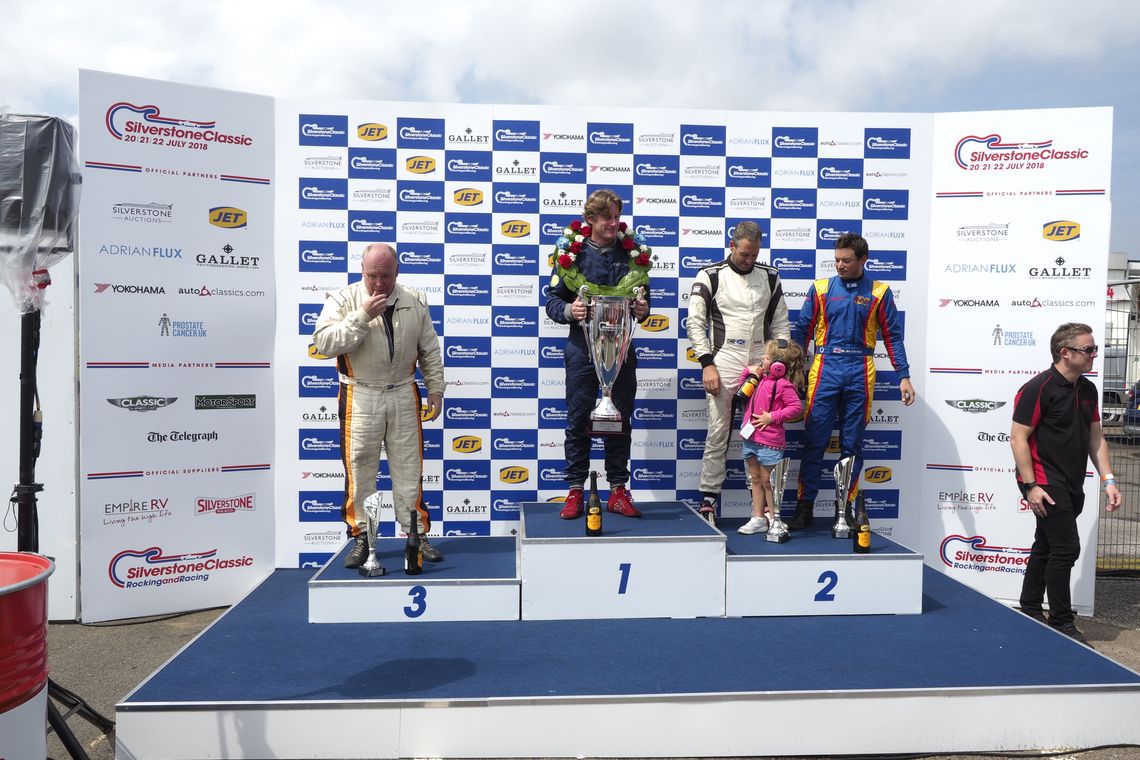 After fierce compeittion from the Lotus 15 of Roger Wills and fellow Lister Knobbly of Tony Wood and Will Nuthall, Chris Ward powered the JD Classics run Lister Knobbly to a victory at this weekend's Silverstone Classic.

Gary Pearson’s Jaguar D-Type led the grid of Woodcote Trophy cars through a rolling start with the Lister Maserati and Ecosse XK120 sitting alongside each other on Row 12. While Nick Riley’s distinctive green and yellow Maserati got off to a flying start, Steve Ward was scuppered by traffic thus losing the XK120 position and temporarily dropping down to 31st place.
Lap 5 and the Maserati was running in a strong 17th and by the time the pit window opened and Nick Riley entered the pits, the car had gained another 3 places. Re-joining in 15th place and now 3rd in class, Nick Riley maintained the pressure on his adversaries to take the chequered flag in an impressive 12th place and 2nd in class.

Having made up three places by the pit window, a quick driver changeover and the XK120 re-joined the race in the hands of Josh Ward. Now running in 26th place, he continued to improve with every lap time and on Lap 15 achieved a personal best at Silverstone of 2:42.2. With the race entering its final stages, the XK120 in its unmistakable Ecosse blue livery had stormed through the field to finish the 50 minute race in 22nd place. 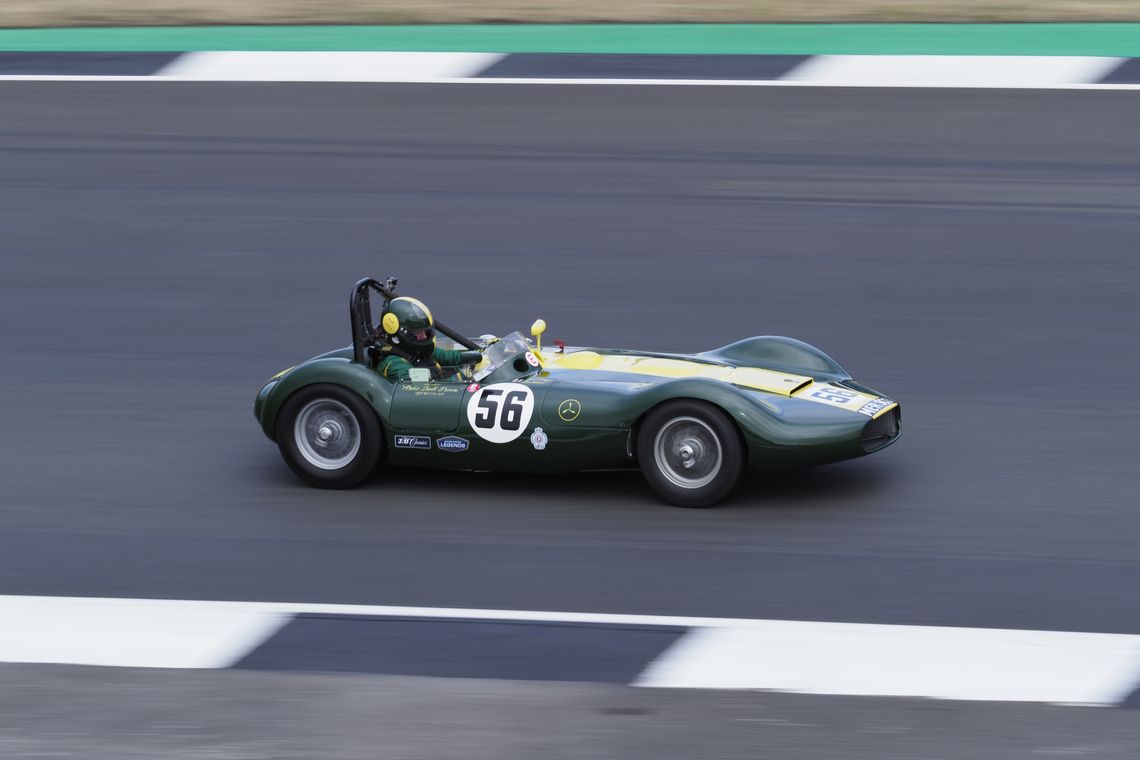 A flying start of the grid for the Lister Maserati of Nick Riley set the tone for an impressive race as he charged the car through to 12th place overall and 2nd in class.