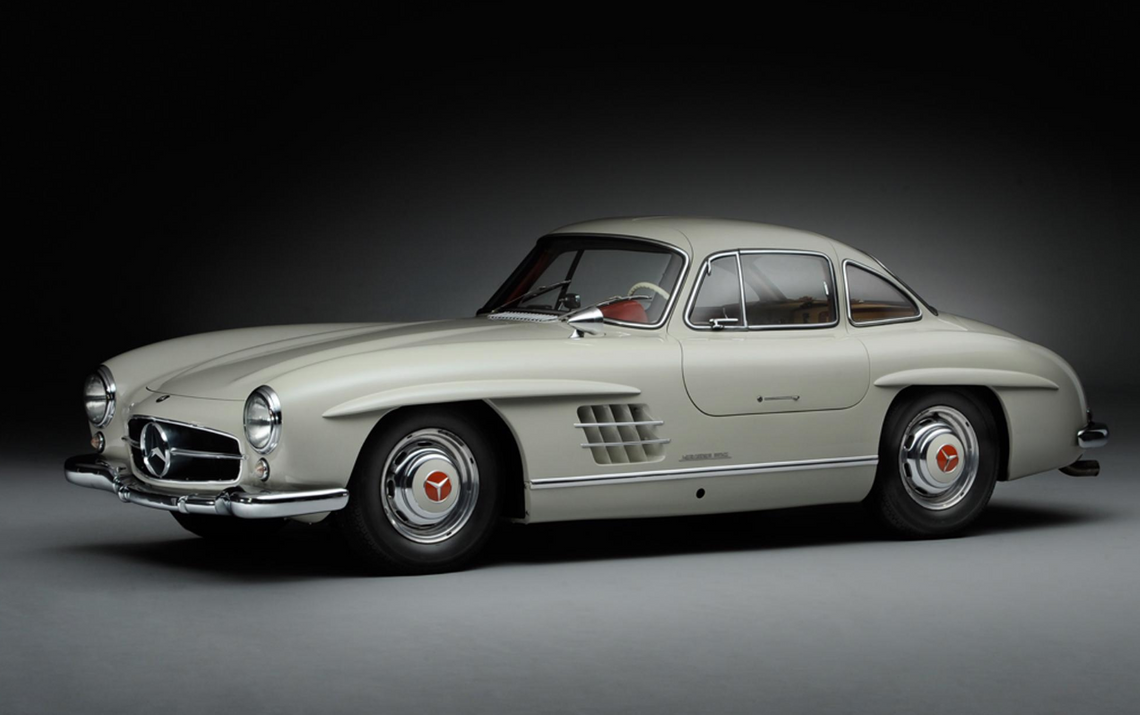 It’s all-too easy to label something an automotive icon, but if there’s any car deserving of the title, it’s the Mercedes 300SL. It was the fastest car in the world, arguably the most beautiful, and spawned a model line – SL, or Sport Leicht – that continues to this day.

An Austrian named Max Hoffman is credited with identifying a niche for the 300SL, convincing the Mercedes Board of Directors that the 300SL racing car should be converted into a road car. In 1952, Mercedes got to work modifying the W194 racer for the street, a car that had won at Le Mans, the Nurburgring and – famously – the Carrera Panamericana, with Fangio and Sir Stirling Moss at the wheel.

Finally, in 1954, the 300SL debuted at the New York Motor Show, powered by a 3.0-litre straight-six, producing 215bhp as standard. Owners could, however, specify a higher compression ratio and a racing camshaft that boosted power to 240bhp. Power was delivered to the rear wheels through a four-speed gearbox, with the very early cars boasting a long shift lever. The rest of the production run had a shorter gearlever, allowing for the fitment of a radio, and many of the early cars have now been converted to this latter configuration.

Standard suspension was coil springs all-round, but there was an option for owners to upgrade to Competition springs, which lowered the ride height by one-inch, bringing the centre of gravity down with it, along with improved handling. At this point, it’s wise to introduce the alloy-bodied cars – perhaps the most desirable of all 300SLs. Around 1,400 Gullwings were built, but only 29 were made with an all-aluminum bodyshell, and they were all fitted with the Competition springs as standard.

The major difference between an all-aluminium-bodied 300SL and its more standard counterpart is really in rarity more than it is performance. The traditionally ‘steel-bodied’ Gullwings still feature aluminium bonnets, doors and boot lids, so while the all-aluminium cars are lighter, it’s not by a tremendous amount.

Whichever model you opt for, you're guaranteed stunning performance – especially considering this is a near-65-year-old car. Acceleration from 0-60mph takes around seven seconds, and top speed was enough to make it the fastest car in the world of its day: somewhere between 145 -160mph.

Although the Gullwing coupé is the more iconic, Mercedes did also produce a Roadster variant. The decision to produce both was made at the same time, but the Roadster didn’t go on sale until 1957, billed as a replacement for the coupé. And Mercedes had used those extra years well, improving aspects of the suspension and handling.

A total of 1,858 Roadsters were eventually built, but depending on the year of the car you’re looking at there will be some key differences. In 1958 a hard-top was offered, so there’s no need for the fabric folding roof. In 1961, more effective disc brakes replaced the drum brakes, and in 1962 a lighter all-alloy engine was added.