This weekend an array of impressive historic racing cars flocked to the iconic La Sarthe circuit for the 2018 Le Mans Classic. A biannual event, over 500 cars will race this weekend across 6 specially selected grids consisting of an array of cars which took part in Le Mans 24 Hours between 1923 and 1981.

Two customer cars made up this year’s line-up for JD Classics with the familiar Ecurie Ecosse Jaguar XK120 of Steve and Josh Ward lining up in Plateau 2; an almost 80 car grid comprised of those competed between 1949-1956. Filtering out onto the iconic Le Mans circuit, Plateau 2’s qualifying session got underway on Friday afternoon. Very hot weather made for challenging driving conditions for the field as Steve Ward took to the driver’s seat for the first stint of the 50-minute session. An impressive first lap for Steve Ward saw the Ecurie Ecosse XK120 initially qualified the car in 30th place and having completed 5 gruelling laps, driver swaps were made and the car quickly re-joined the session without fault. With Josh Ward now in the driver’s seat, he continued to improve on their lap time and with a best lap time of 6:05.2, the car qualified in 32nd place within the extensive Plateau 2 field.

Plateau 3 (1957-1961) was soon to follow with another customer car; the former Archie Scott Brown 1956 Lister Maserati. Maintaining the momentum, its first flying lap instantly qualified the car in an impressive 29th place and as the session came to an end, the Lister Maserati held the strong position to qualify well within the top half of the grid on its debut for both car and driver at the challenging circuit.

With qualifying now complete, Friday evening’s late-night practice sessions allowed drivers to familiarise themselves with the complex circuit ahead of Saturday’s night races proving beneficial to both cars and drivers. With both continuing to run well and maintain consistent lap times, the team’s attentions soon turned to Saturday’s on track racing action.

Despite the first of Saturday’s races starting in the early evening, conditions were gruelling after another hot and humid day to test even the most seasoned of drivers. Plateau 2 lined up on the start finish grid to begin the first of its three races in the traditional Le Mans start fashion much to the delight of the packed grandstands. Once completed, the grid reformed and completed the formation lap and into a rolling start as the red light turned green and the XK120 of Steve Ward roared through into the race with the 77-car strong field. Starting from 32nd on the grid, a slow start saw the Ecosse car slip back into 44th, however by Lap 3 had managed to make up a couple of places. Lap 4 and Steve Ward came into the pits for the compulsory stop. Racing solo for the first race, Steve Ward returned to the circuit in 44th place and within the final 4 laps regained another three to finish the race in 41st place.

The Lister Maserati of pairing Nick Riley and Ben Short were next to compete as Plateau 3 began to line up ahead of the 43-minute race. With Nick Riley taking the first section of the race, he continued to maintain position and having passed the drive over to Ben Short in the pit window swap over, he re-joined in 28th. Continuing to improve with every lap, Ben Short charged the Maserati through to 21st by the last lap and managed to gain on the 1959 Morgan + 4 of Adrien Van Der Kroft in the last few corners to claim an impressive 20th place in Race 1 of Plateau 3. 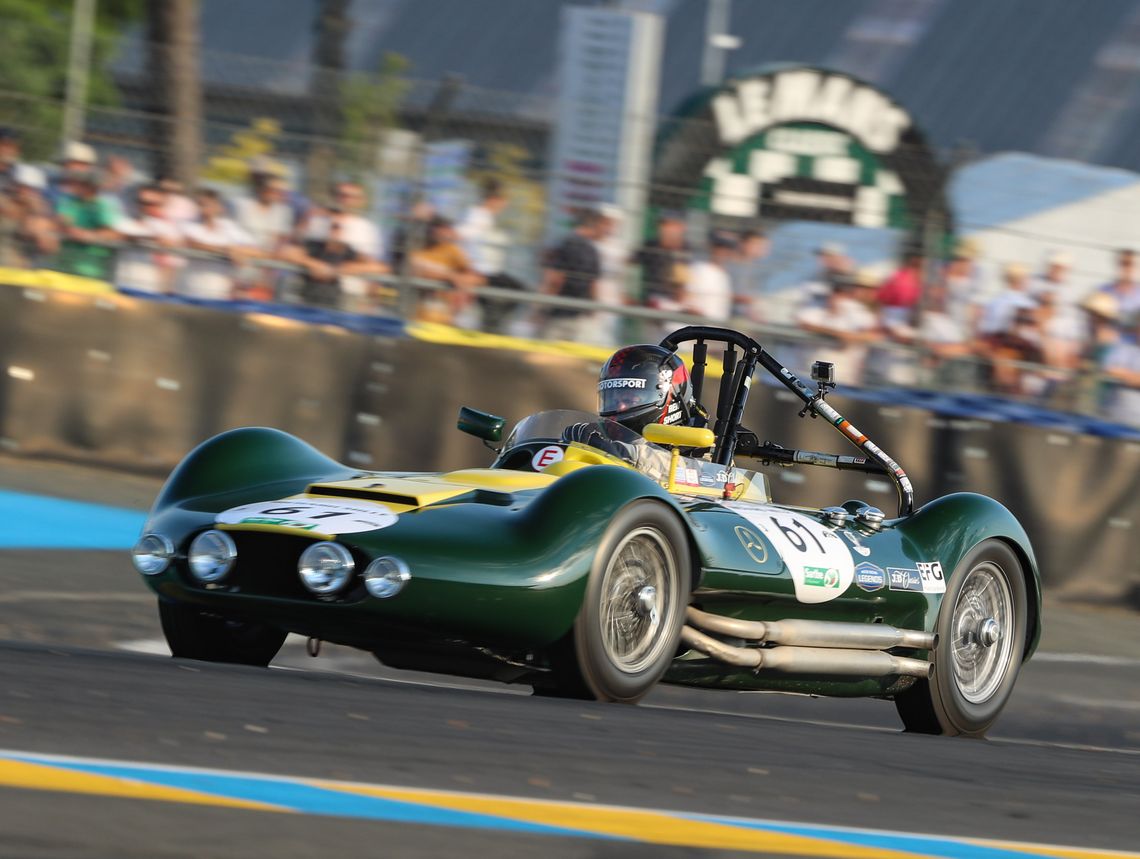 The Lister Maserati of Nick Riley and Ben Short made its presence known having claimed an impressive 20th place within the large Plateau 3 grid.

As Saturday evening turned into the early hours of Sunday morning so the racing continued as the Ecurie Ecosse XK120 once again returned to the already challenging circuit this time in the event’s signature night races.

With the starting line-up determined by the result of the previous race, the distinctive blue Jaguar gridded up in 41st place. Having completed two flying laps, Steve Ward was able to gain another three places as he handed the drive to Josh Ward who re-joined the race in 38th place. With just over 20 minutes of the session remaining, Josh Ward achieved the car’s fastest lap of the event with a 5:49.2 which stormed the car up to finish the race in 24th place. Similarly, in Plateau 3, both drivers and car impressed with the Lister Maserati completing Race 2 by maintaining position to hold a respectable 20th placed finish. 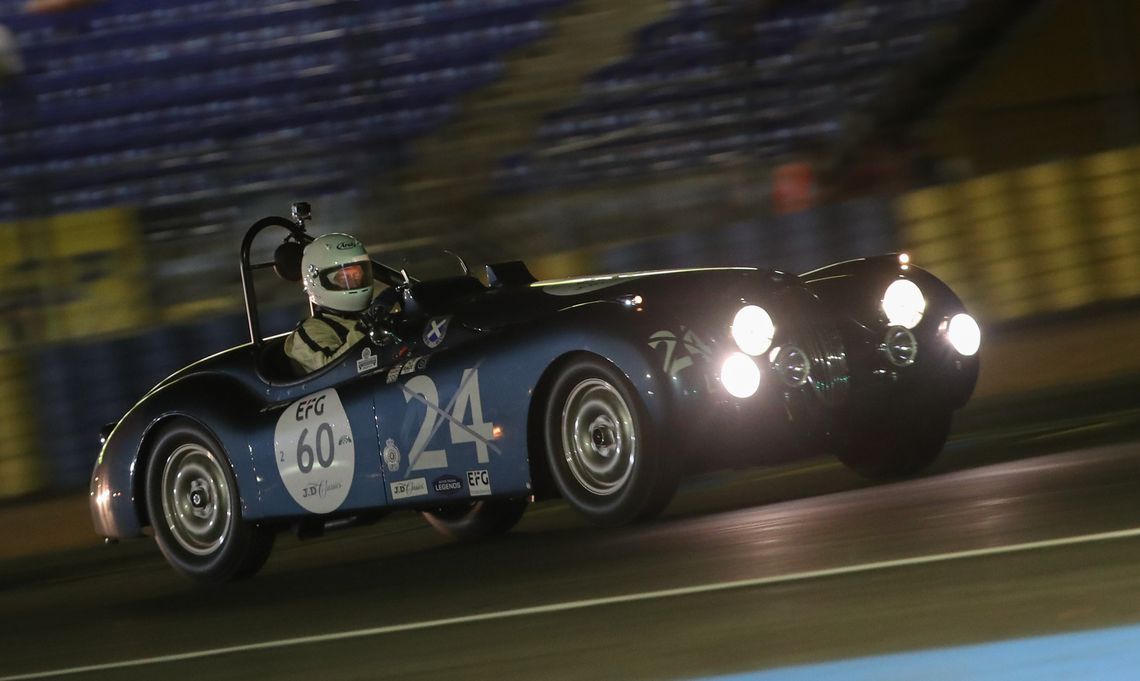 The Ecurie Ecosse Jaguar XK120 contends the challenging circuit during one of the night races.

The final races of each plateau took place on Sunday afternoon in yet more humid conditions for competitors to contend with. Having been promoted up four places on the grid, the Ecurie Ecosse Jaguar XK120 sat in 16th place for its last race of the weekend. Driving solo for the final race, Josh Ward got off to a flying start making his presence felt in the top half of the field and by lap 4 had moved up into 11th place and well on the chase of the top ten pack. With the pit window open and with just over half of the race remaining, Ward pitted to complete the compulsory pit stop as the team gave the car a quick once over before re-joining in 12th. Entering its latter stages, Josh Ward continued to improve on the previous lap time and on his final lap of the race achieved a personal best of 5:38.4 to claim 10th place and 1st within his class. With three impressive performances amongst a vast field of highly competitive historic racing cars, the Ecurie Ecosse XK120 completed the weekend in a combined overall position of 14th amongst the 74-car grid of Plateau 2.

Last but not least, the Lister Maserati made it final appearance at this year’s Le Mans Classic as Nick Riley exited the pits to join the field as the race got underway. Having started on the grid from 20th place, the Maserati pushed forward and by Lap 2 had already shaved 13 seconds off the previous lap time. A puncture on his in lap for his driver changeover resulted in a quick tyre change by the JD Classics team and the car returned to the race in 40th place. Within another three laps the now driver of Ben Short had fought through the field and running in 29th position.  With the chequered flag edging ever closer, Short had one final late surge to finish the race in 26th place and with a combined overall plateau 3 ranking of 17th out of 80.