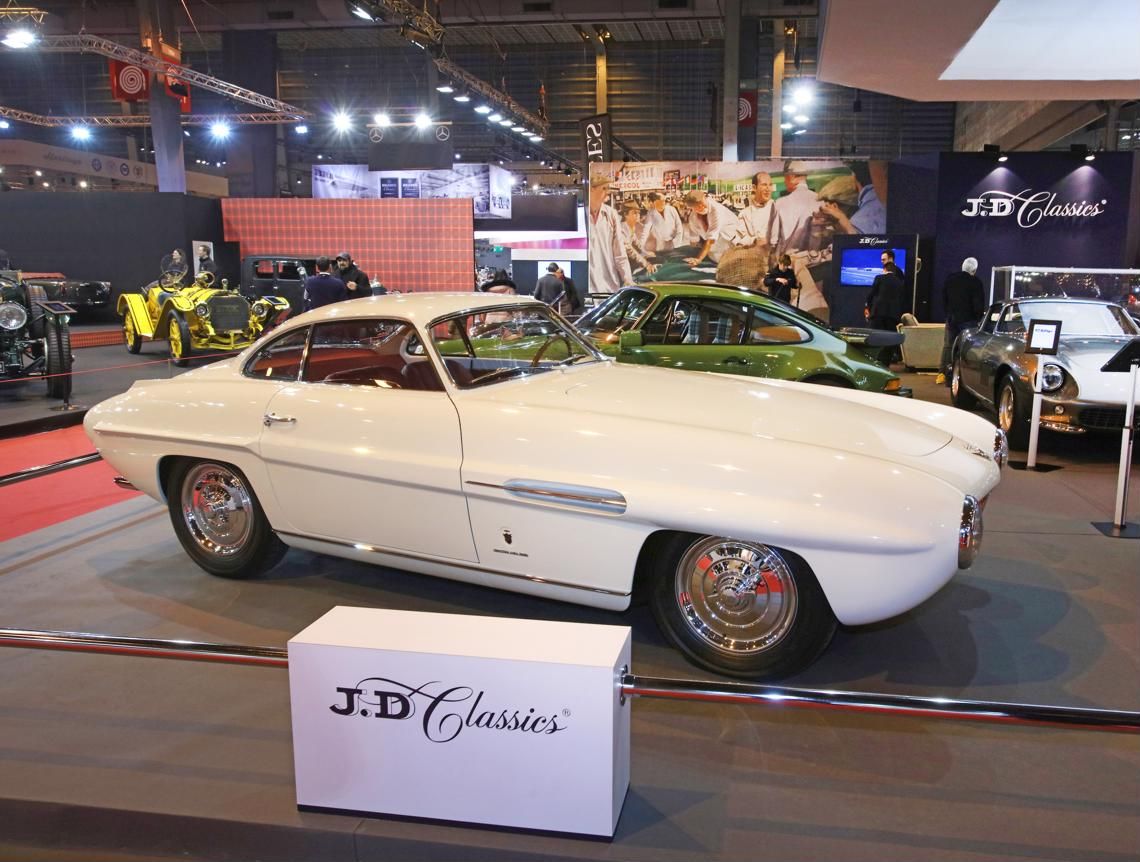 The Retromobile show, held in Paris every February, is always the first major classic car event of the year, hosting some of the finest vehicles and most iconic brands under one roof. JD Classics returned to the show in February for the fifth consecutive year, showcasing ten exceptional and rare vehicles from its current stock, all with exemplary provenance.

Take, for example, the impeccable JD Classics-restored E-type chassis #15 on the stand, bought and owned by the legendary Bruce McLaren. One of the first batch of 18 ‘priority list’ hand-built cars, of which seven were road cars built to race specification, it was originally supplied to McLaren by the well-known Jaguar dealer Coombs of Guildford. Bruce can be seen driving this particular car in the paddock during the 1961 TT meeting at Goodwood in the recently released film about his extraordinary life. His name, of course, lives on in the McLaren Formula One team and McLaren road cars division.

Also on the stand was another Jaguar with a motorsport background – the XJ220C TWR Le Mans. This car was driven by John Nielsen, David Brabham & David Coulthard at the Le Mans 24 Hours race in 1993, and even scored a class victory. But, having completed 306 laps of the circuit at an average of 102mph, it was disqualified several weeks later for an alleged technical infringement. An appeal by TWR was not accepted on the grounds that it had been lodged out of time. In more recent times, this XJ220C has appeared at the Goodwood Festival of Speed, Le Mans Classic and as the lead car in Silverstone Classic’s XJ220 anniversary celebrations in 2017. 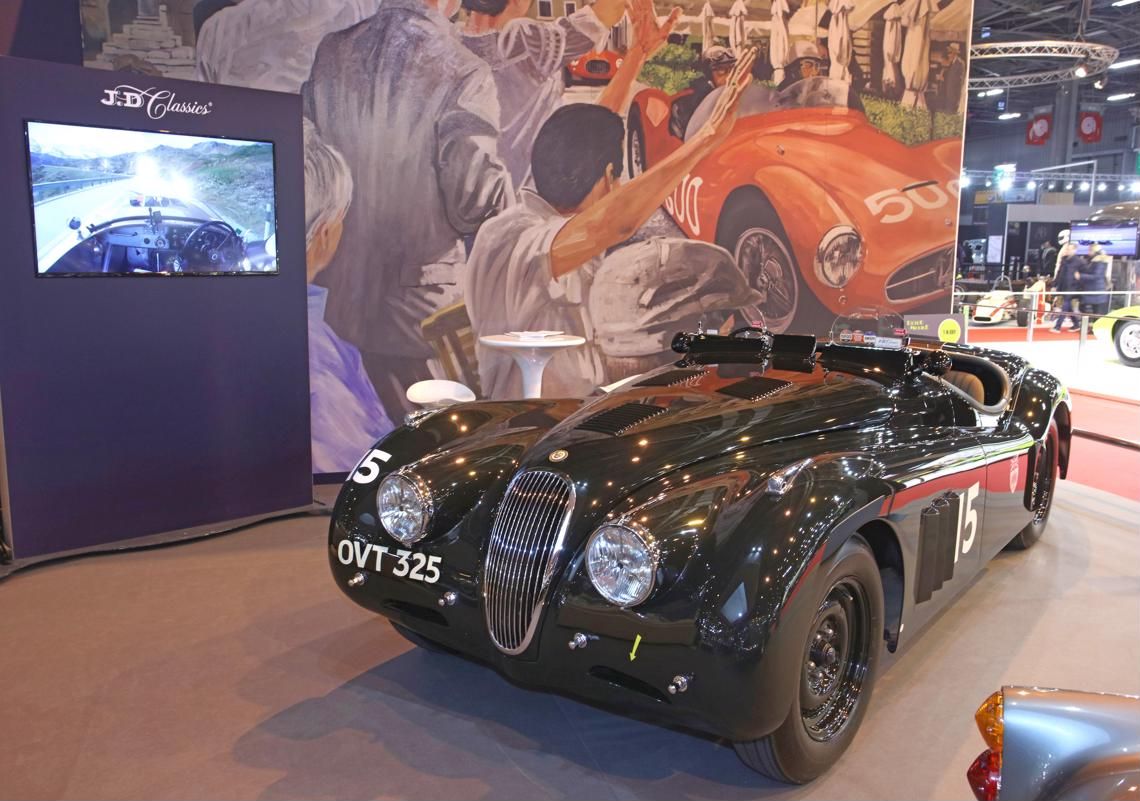 But Jaguar’s motorsport heritage stretches back much farther than its Le Mans successes – all the way back to the late ’40s and ‘50s, in fact, when the XK120 found a legion of ‘gentleman racer’ buyers. The XK120 Competition Roadster on JD Classics’ Retromobile stand, is one such example, having been campaigned by owner Jim Swift at a number of races, including the 1951 Tourist Trophy and 1952 nine-hour event at Goodwood. Not only was it campaigned, but it also achieved a level of success, with double-digit victories to its name. Such is the importance of this car’s racing heritage that when JD Classics acquired the car it chose to undertake a full professional restoration, during the course of which a number of the significant racing modifications were re-installed. Since this work has been completed, the car has returned to competition with Mille Miglia entries in 2014, 2015 and 2016 and a successful showing at the Goodwood Revival in 2015.

Another exceptional and rare car on the JD Classics stand, was the Fiat 8V Ghia Supersonic – one of just 15 examples built, and with a famous owner in its past. The example offered here was constructed in 1953 and sold to American businessman Howard Darrin. Finished in white with a red interior it was shipped to the US and displayed on Darrin’s stand at the 1954 World Motor Sports Show at Maddison Square Gardens, New York. It was here that it caught the attention of none other than Briggs Cunningham, who bought the car for his wife. Having been fully and professionally restored in recent years by noted specialists Strada e Corsa, this exceptional motorcar was also displayed at Pebble Beach in 2017.

JD Classics also showcased two impeccable Aston Martins; a DB4 Series 4 and a DB5 Convertible, with the latter the subject of a full JD Classics restoration. The DB5 is one of only 123 examples in RHD and is among the final batch constructed between December 1964 and September 1965. Unusually for a car built in RHD it was exported from new to the United States, where the DB5 was delivered to its first owner, a Mr Wilton David “Bill” Manhoff, who was an established Hollywood screenwriter.

A real rarity on the JD Classics stand was the one-of-five Ferrari 275 GTB 6C ‘Shortnose’ in right-hand-drive. Currently undergoing a total JD Classics in-house restoration, the car was featured on the stand halfway through the process, giving stand visitors an up close look into JD Classics’ meticulous restoration techniques. The car was delivered new in 1965 to well-known businessman and philanthropist Gerald Ronson via Maranello Concessionaires and H.R Owen Ltd. Later in its life it came under the ownership of racing driver Bill Goodall, who achieved numerous successes from 1985-1995 in events such as the Prescott Hill Climb, Wiscombe Park Hill Climb, Brighton Speed Trials, and the Manx Classic. 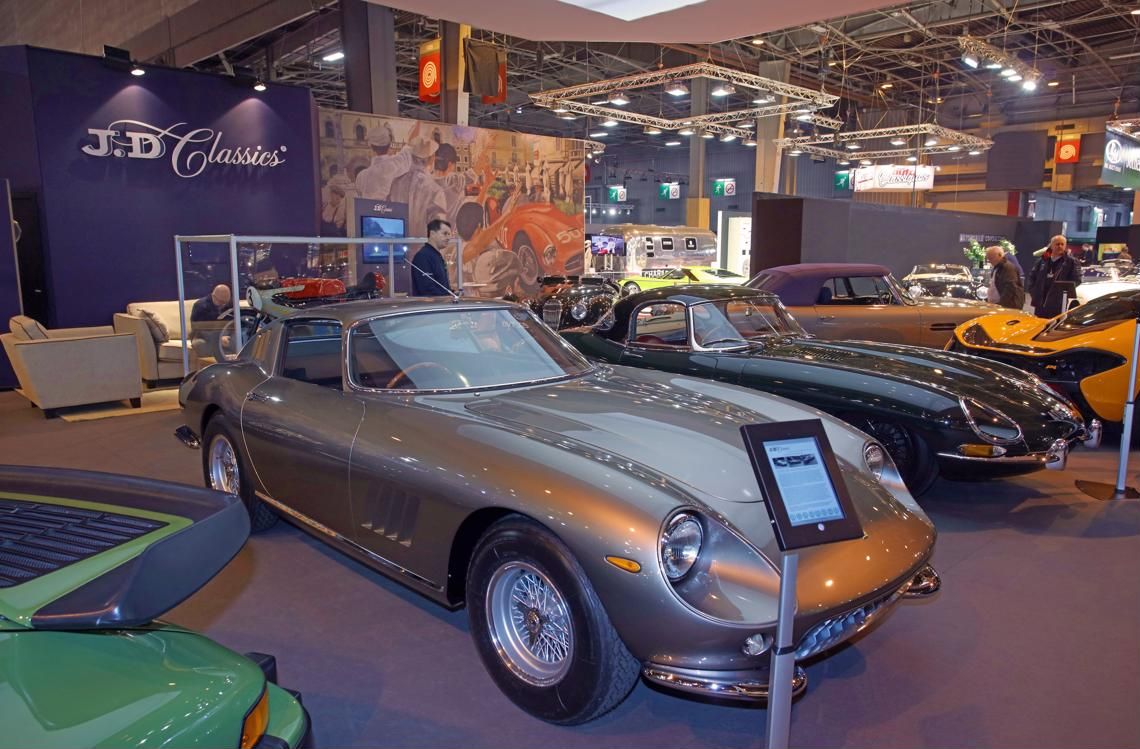 A Mercedes 300SL Roadster is always special, but the JD Classics example in Paris stood out for its originality, and its rarity. As the second-to-last built it has the desirable disc brakes and alloy engine block, and has covered less than 30,000 original miles since new. This highly original Roadster spent 48 years with one single owner, and under the ownership of only three people in its 58-year life. Presented in its correct factory colour scheme of White with Red, both the paint and the interior are original with the red leather displaying a delightful patina. Importantly the car also comes with its unused factory hard top, tools, spare wheel and jack. 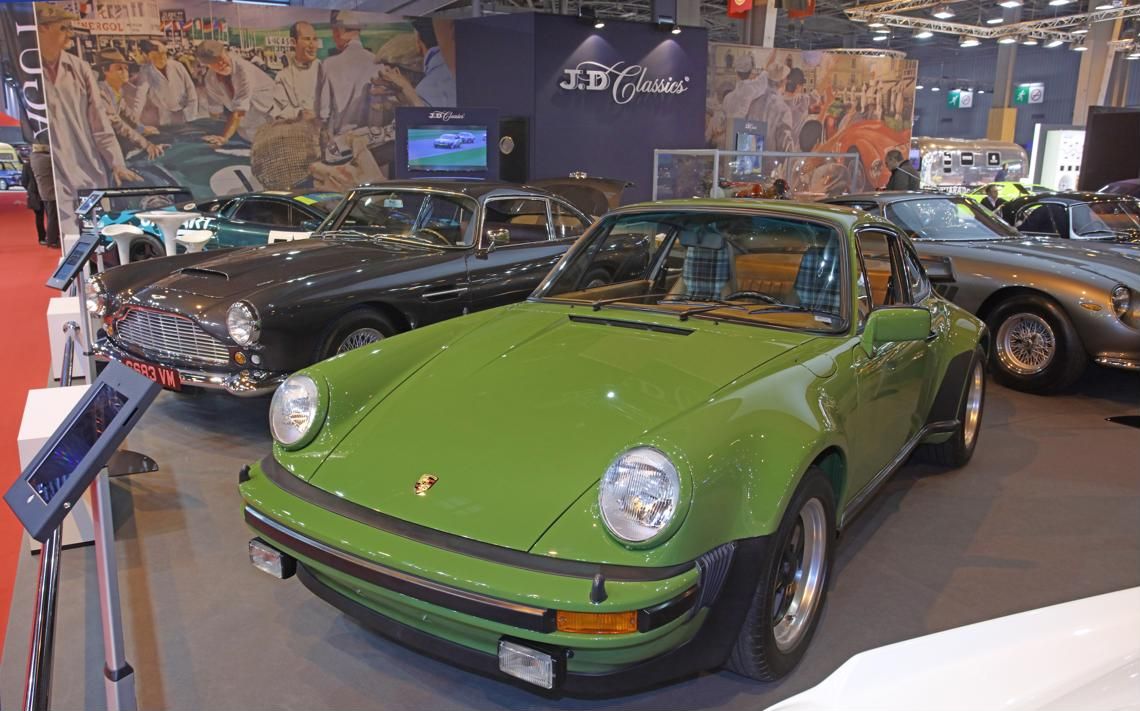 A unique sight at Retromobile, JD Classics’ exceptional 930 Turbo is one of only two cars to leave the factory in the striking colour of Olive green, and is now the only example still on the road. It comes in the lightest and most desirable German specification with a single wing-mounted mirror, no air conditioning, and no sunroof. From the more modern end of the performance spectrum, JD Classics showcased the fifth experimental prototype McLaren P1, used from May to June 2012 in developing the car’s seamless-shift gearbox and as the factory’s New York and Geneva show car.