Its first appearance of the 2018 season, the Bastos Rover was the first of three JD Classics cars to qualify for this weekend’s Donington Historic Festival.

With the seasoned pairing of Chris Ward and Steve Soper joining forces once again in the distinctive red and white Bastos Rover for this years Motor Racing Legends series, the 30-minute qualifying session got underway for the Historic Touring Car Challenge with Tony Dron Trophy field. With an initial first flying lap time of 1:26.8, Steve Soper continued to improve his lap time despite the session being yellow flagged to produce an impressive 1:18.8 lap time. Having completed 9 laps, the Rover was called into the pits and the car handed over to Chris Ward while the team gave it the quick onceover before returning to the track. Maintaining momentum with a first flying lap to match Steve Soper’s, the JD Rover continued to charge despite the traffic of the 39-car field to qualify in an impressive 3rd place with just under a second separating the three front runners. 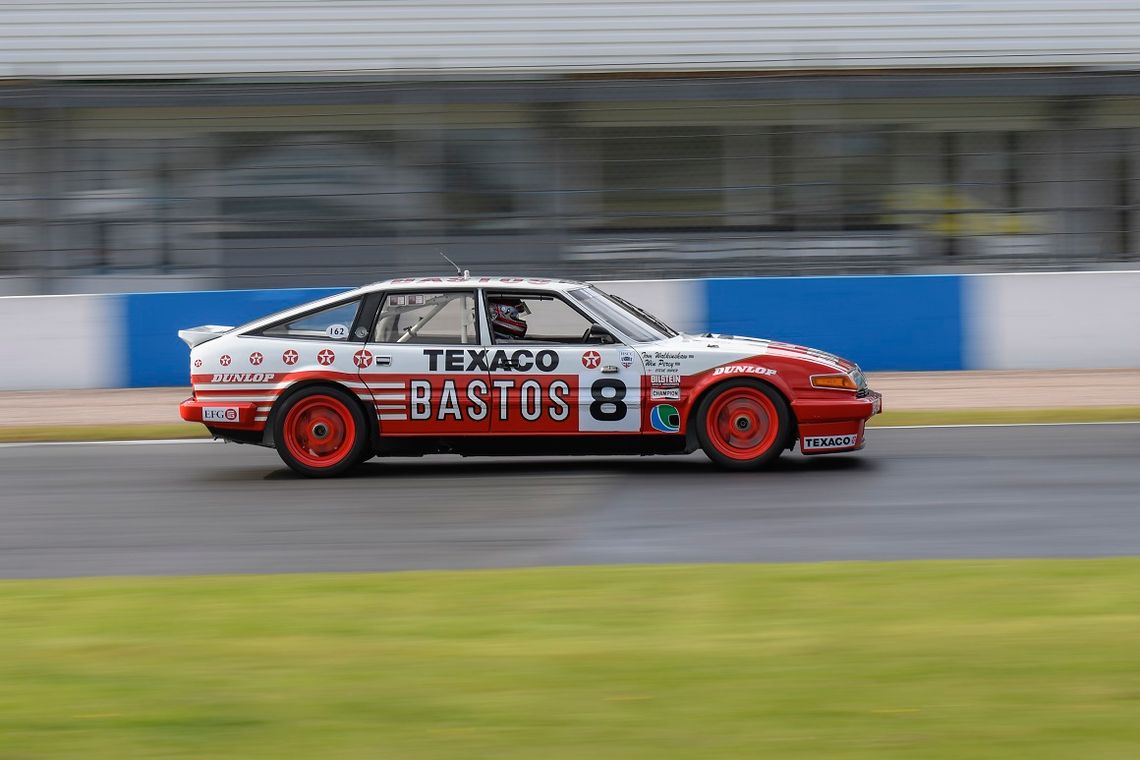 The Ecurie Ecosse Jaguar XK120 of father son duo Steve and Josh Ward was back to contend the RAC Woodcote Trophy series making their 2018 racing debut at this weekend’s Donington Historic Festival.

With conditions a far cry from Goodwood Members Meeting’s historic racing opener just 6 weeks previous, Steve Ward exited the pits and took to the track for qualifying in dry and warm on track conditions. Initially qualifying the car in 24th, Ward consistently improved his times and by the time he handed the car over to Josh Ward after 15 minutes, the XK120 was running mid field and holding its own. Re-joining in a short lived 30th place, Josh Ward was quick to roar the Ecurie Ecosse car back through the field running in 19th place by the end of his first lap alone and with a fastest lap time of 1:29.7. As the 30-minute session came to an end, the Jaguar XK120 had qualified in 21st place ahead of Saturday’s 60-minute race.

Having made its JD Classics debut at the Goodwood Members Meeting in March achieving an impressive 4th place within the Salvadori Cup, this weekend the Lister Knobbly makes its Motor Racing Legends debut within the Stirling Moss Trophy field. A smaller grid than usual, the 21 pre-1961 sports cars made their way on to track however progress was quickly hampered with the deployment of the safety car within the first lap due to an oil spill. After a further two laps the session resumed but with conditions still slippery, driver Chris Ward had to tread carefully for the remainder of the 30-minute session. 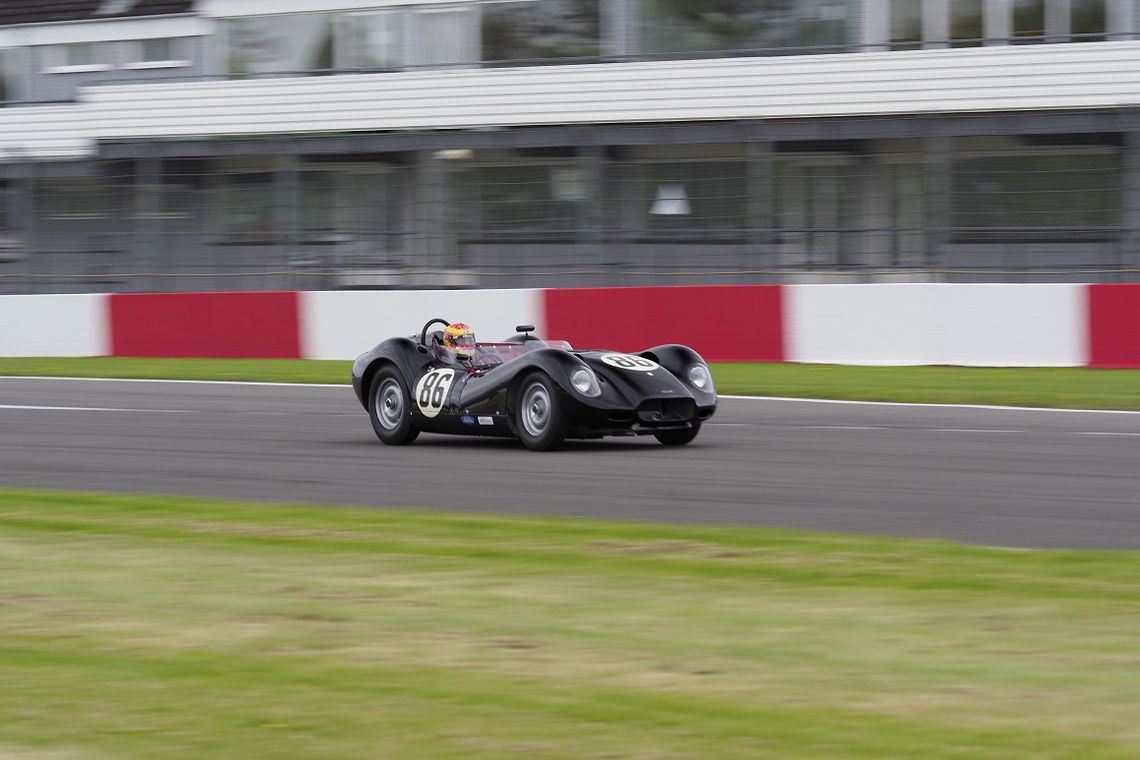 Achieving an impressive 1:19.8 on lap 7, the car came into the pits for a check over from the team. Re-joining in 3rd place and with 13 minutes of the session remaining, the Lister Knobbly continued to match its previous pace but with the oily track making conditions potentially treacherous, the JD Knobbly retreated to the pits to wait out the remainder of qualifying to maintain the well-deserved 3rd position on the grid.

A rolling start led the HTCC with Tony Dron Trophy field off the start line with the Bastos Rover sitting in third place on the grid. A slow start for Steve Soper saw the car slip back into 5th place on the first lap and by Lap 6 the car was running in 8th. With the car suffering from a mechanical gremlin, Steve Soper continued to maintain the 8th position until the pit window opened. One of the first cars into the pits for driver changeover, the Rover was quickly handed over to Chris Ward as the crew checked the car to identify a component failure as the culprit. Undeterred, the car returned to the track in 21st place and produced an impressive 1:18.2 in its first flying lap alone. Within 8 laps the car had stormed its way through and up into 7th place and as it continued its charge, the Bastos Rover found itself in 2nd place and with just 15 minutes remaining. In spite of the car’s technical issue and the challenging conditions posed by the hot weather, the JD Classics Rover ran a strong race to claim a podium position behind the winning BMW M3 E30 of Nick and Harry Whale and the fellow BMW M3 E30 of Mark Smith and James Moulton-Smith. 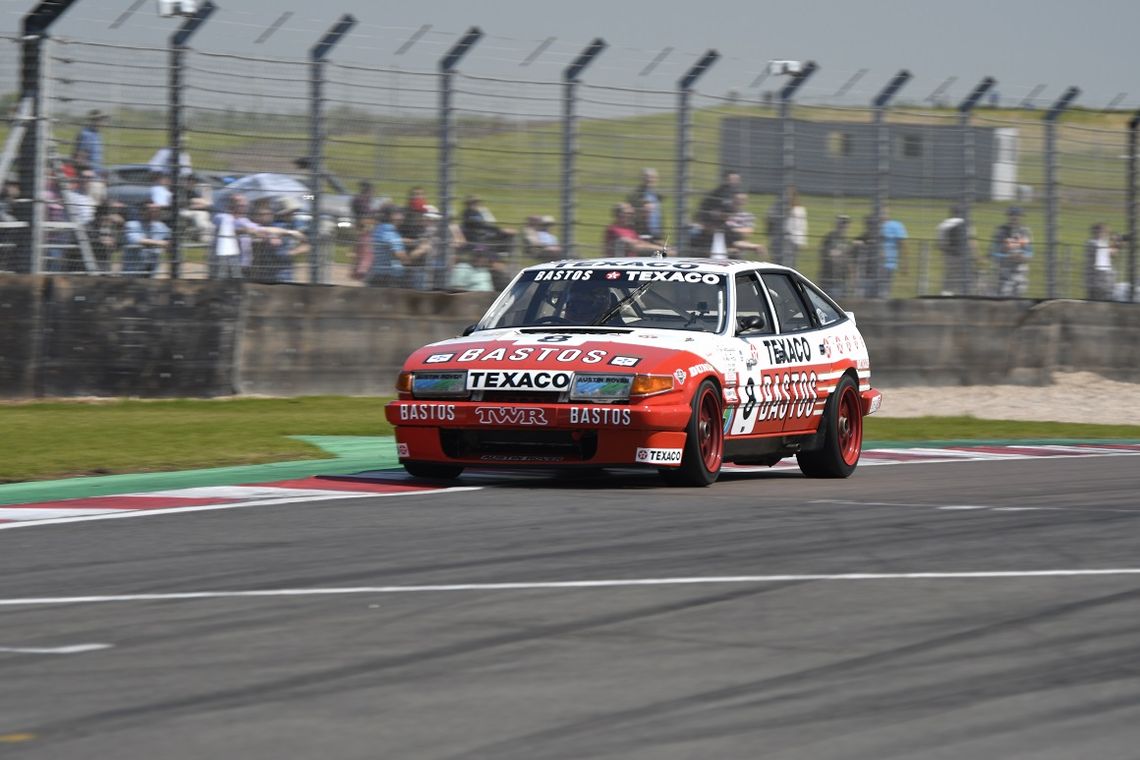 Steve Ward took to the driver’s seat for the first stint of the 60-minute RAC Woodcote Trophy race on Saturday afternoon. Starting the race in 21st place, the Ecurie Ecosse XK120 got caught up in traffic losing him position with the car running in 30th place by Lap 3. As the field began to settle into the race and spread out, Steve Ward continued to consistently improve his laps times and so worked his way back through the field to gain another 4 places. With the pit window now open, Steve Ward was called into the pits at the half way stage and with the mandatory 60 second stop completed, the car re-joined the race in 25th place. With 30 minutes remaining and now in the hands of Josh Ward, the XK120 continued its pursuit for position taking only another three laps to gain three more positions and achieving the car’s fastest lap time of the race with a 1:31.0. With just over five minutes remaining, Josh Ward fell victim to a burst tyre and was forced to retire the car from the race. Despite this, the Ecosse XK120 still acheived a third in class position. 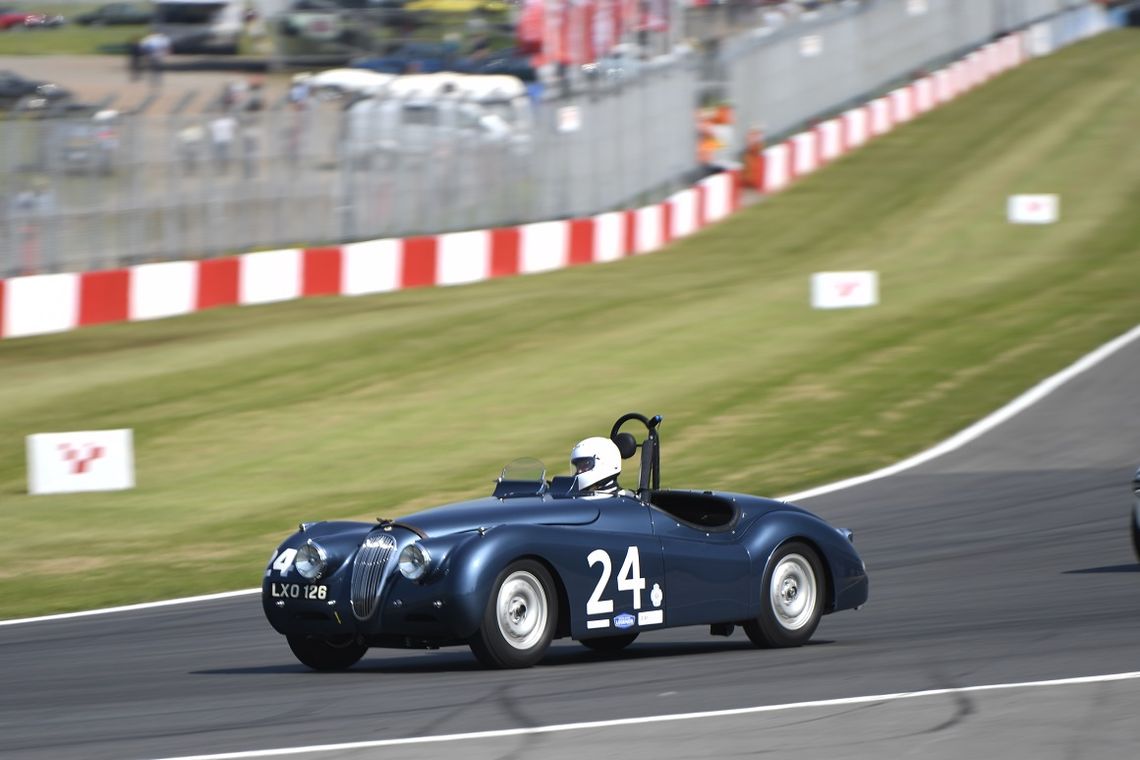 Making its racing debut at Donington, the Lister Knobbly of Chris Ward came through for a rolling start in 3rd place on the grid behind the pole sitting Lotus 15 of Ollie Bryant and fellow Lister Knobbly of Phil Keen and Jon Minshaw. Warmer conditions than the day before made driving conditions even tougher as the field were led away into the 60-minute Stirling Moss Trophy race. 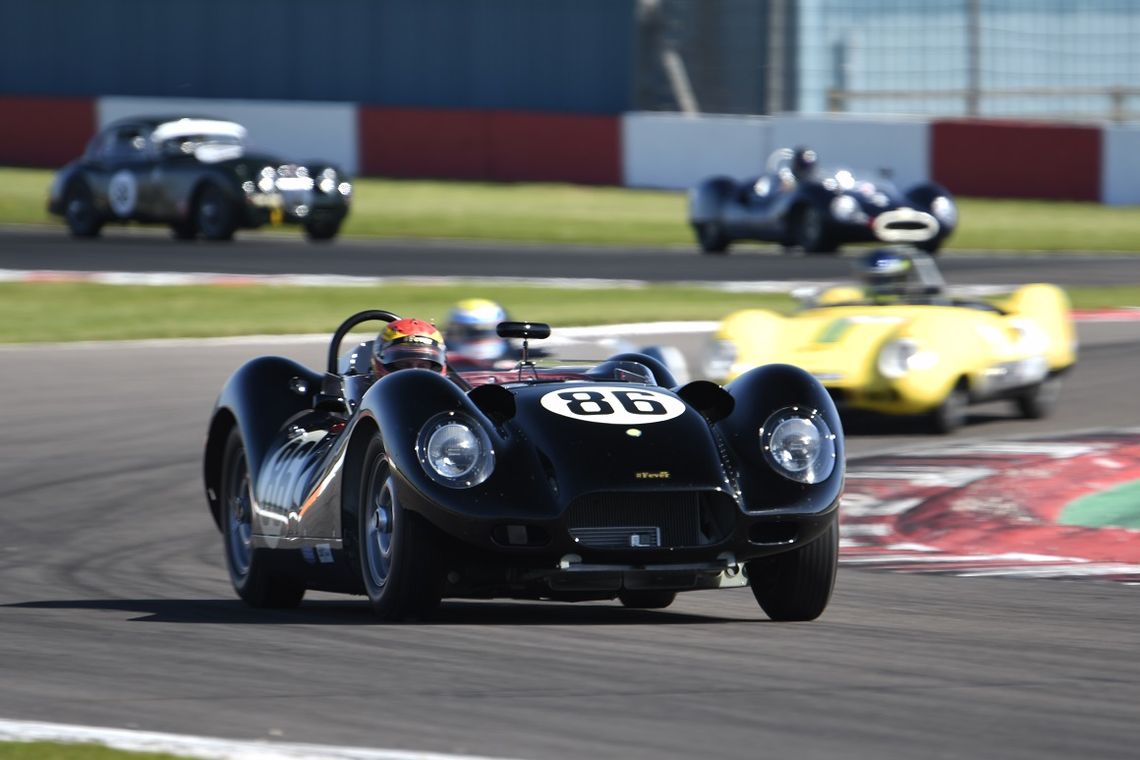 As the field came through into Lap 3, a quick move up the inside by Chris Ward saw him claim 2nd position and was now on the chase after the front running Lotus with just 2.4 seconds separating them. Over the coming laps, the Lister Knobbly got caught in traffic as they began to catch the backmarkers thus allowing Bryant’s Lotus to pull away with a 6 second gap by Lap 10.

An on-track incident saw the deployment of the safety car coincide with the pit window opening and so the field quickly descended to the pits in a bid to save time. With the lead car coming in on lap 18, Chris Ward was to follow a lap later and a quick stop from the team saw the Lister Knobbly re-join with a gap of just 2 seconds separating the two front runners when the safety car came in. With just under 30 minutes remaining as the race got underway again, the Lotus 15 slowly began to pull away with the gap increasing to just over 3 seconds. The 3rd placed Lister Knobbly of Phil Keen and Jon Minshaw was also on the charge with increasingly faster sector times although a drive through penalty on Lap 28 meant Minshaw and Kenn slipped down into 5th place with the Knobbly of Will Nuthall and Tony Wood holding position. With the Nuthall/Wood Knobbly subsequently receiving a drive through penalty on Lap 31, the Keen/Minshaw car had returned to the top three runners. As the race entered its latter stages, the Lotus 15 was still holding onto the lead with Chris Ward maintaining the chase, however with just 2 minutes of the race remaining Ollie Bryant’s Lotus fell victim to a mechanical failure and retired from the race with Chris Ward and team JD Classics taking the victory.