The World Leading Brand Since 1987

Fresh from their one win and two second place success at Goodwood Revival, JD Classics soon found themselves at the annual Six Hours event at the iconic Spa Francorchamps circuit.

Living up to its rainy reputation, Friday morning’s qualifying sessions began under typically wet conditions as the 1965 Austin Mini Cooper S of Nick Riley and Ben Short joined the track with the remaining 39 pre-66 touring cars for qualifying. Instantly feeling how conditions had affected the track’s grip, the field began to slow the pace down as the track became slippery. Nick took the first drive and fresh from his impressive debut performance at Goodwood the week previous went out onto the challenging circuit. Having completed one lap, the Mini suffered from a distributor problem thus ending its qualifying session prematurely.

With over 70 cars making up the combined field, the Stirling Moss/Woodcote Trophy  was sure to make an exciting weekend of racing as the late 1950s sport cars take on the pre-56 sports racers. Remaining wet and cold, the field began filtering out onto the track in a bid to claim pole. A great first flying lap from Chris Ward rocketed the Costin Lister up into 2nd place with a lap time of 3:38.3 and four seconds off the current pole-sitting Lister Knobbly of Jon Minshaw. A quick once over from the team on Lap 5 and Chris Ward re-joined the session maintaining his 2nd place. The Ecurie Ecosse Jaguar XK120 of Steve and Josh Ward was also running well with continually improving lap times. After five laps Steve Ward handed the remainder of the drive to Josh Ward who completed the qualifying session in 44th place having shaved an impressive 24 seconds off their first flying lap. An electrical problem for the Costin Lister prematurely ended its session however its best lap continued to secure the 2nd position until the end of qualifying lining up behind pole sitter Jon Minshaw for Saturday’s race. 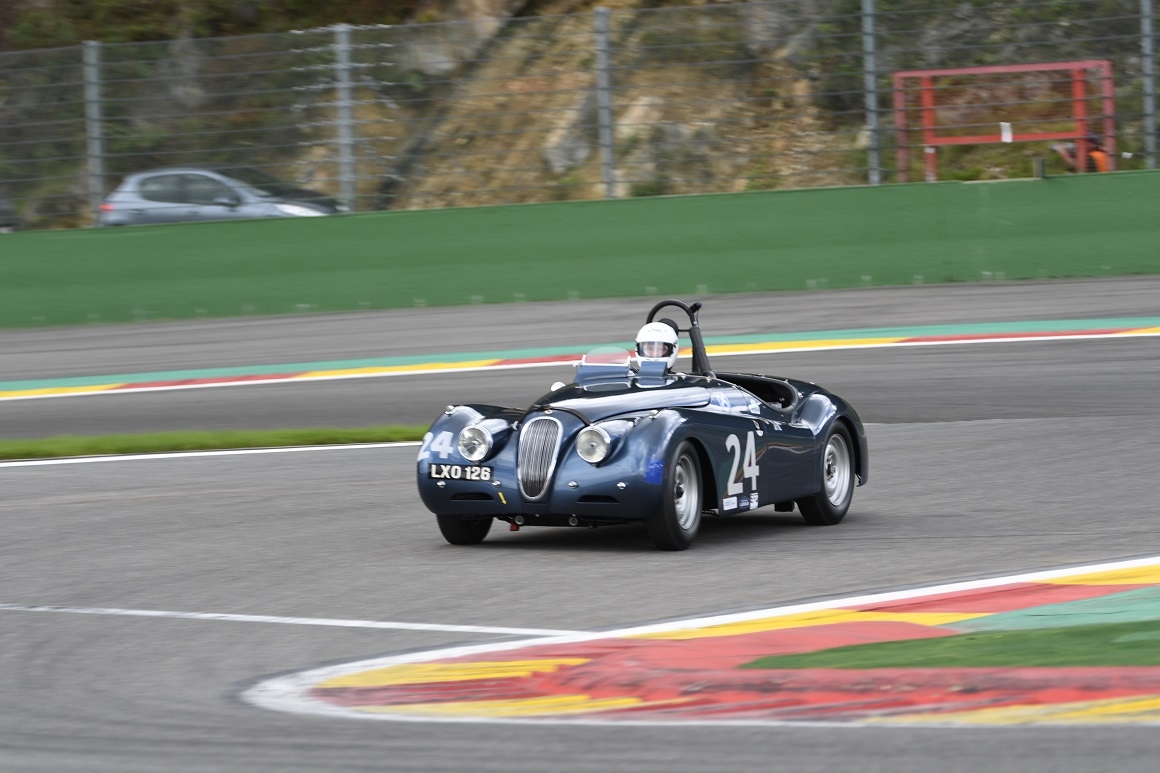 Steve and Josh Ward produced some consistent times in qualifyiong to line up in 44th for the race within a 61 car field.

The weekend’s namesake race, the Six Hour Endurance race this year lined up with over 110 cars all vying for the coveted title. An array of pre-65 touring and sports cars, the competition was fierce as a field Ford Mustang’s, E-Type’s and GT40s took to the track for Friday evening’s 90-minute qualifying session. Chris Ward and Andrew Smith paired up for the weekend to compete in the JD Classics Ford GT40 as Chris took the first stint of the session. Due to the high volume of cars on track at any one time, getting a clear lap was proving problematic, however remaining unfazed by the challenge, the JD GT40 was running at the front of the field after just two flying laps. Not making it easy for him however was the fellow GT40 of Gavin and Rory Henderson who were in hot pursuit. On Lap 4 and running in pole position, the JD GT40 pitted while the team checked over the car and the drive passed to Andrew Smith. Returning to the track in 5the place, the pressure was now coming from Richard Meaden and Martin O’Connell’s GT40 which had quickly achieved a new best time of 2:44.4. Reacting to the pressure, the JD car responded with speed and by Lap 8 was running back in second place. With 45 minutes remaining, the session was red flagged and the field congregated in the pits whilst the stranded car be recovered. After 10 minutes, the session resumed and the extensive field of cars returned to the track.

As qualifying reached its latter stages, it was now the GT40 of Georg Nolte, Franck Stippler and Michael Funke holding pole position, however the JD car was closing in as Chris Ward continued to produce ever quicker lap times. A flying lap on Lap 15 looked promising for Chris Ward with a middle sector time over two seconds faster than its front running adversary, however traffic slowed the GT40 down in the final sector keeping JD Classics in the second place position. Another red flagged incident suspended the session once again with just 14 minutes remaining and it wasn’t until the clock had just two minutes left that the track re-open. Wanting to refamiliarize himself with the track in the dark, Andrew Smith took one last opportunity to get one last flying lap in in a bid to claim pole but with traffic once again hampering performance, the JD Classics GT40 still claimed an impressive 2nd place on the grid lining up alongside the fellow GT40 of Nolte/Stippler/Funke ahead of Saturday’s six hour race. 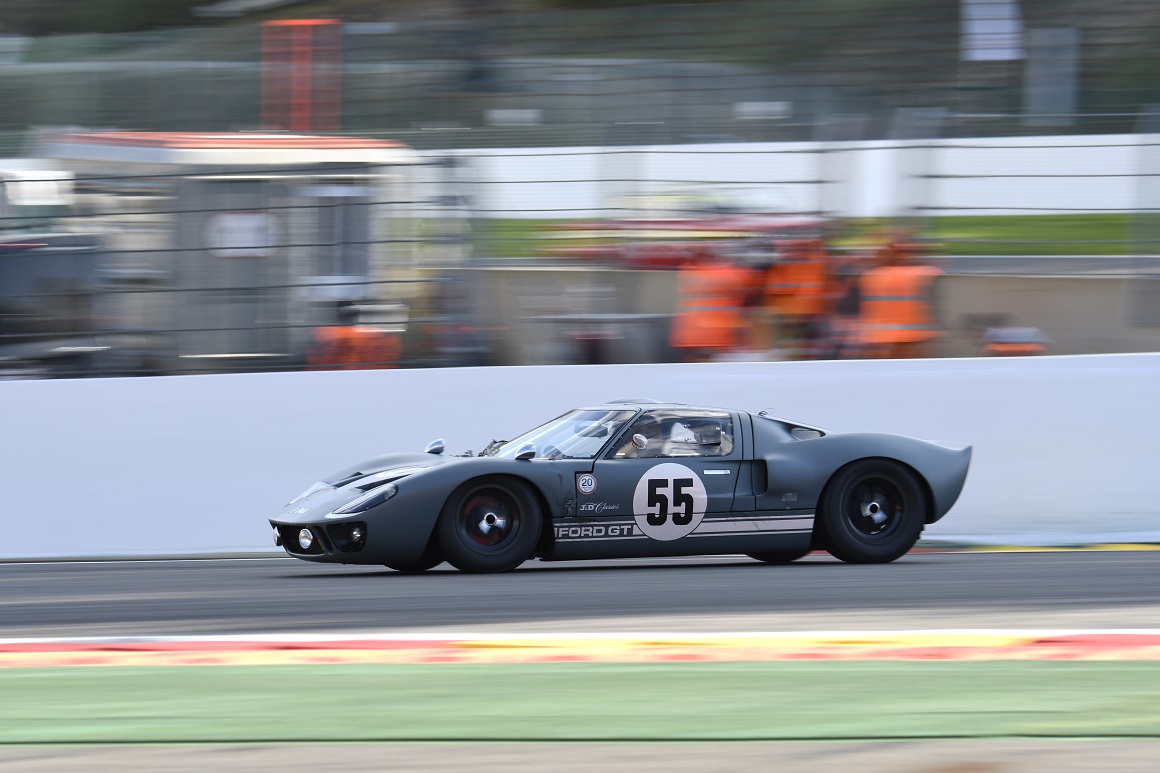 The JD Classics Ford GT40 fought off stiff competition during qualifying for the Six Hour Endurance race to line up in 2nd position on the grid ahead of Saturday afternoon/evening race.

Saturdays morning’s Masters pre-66 Touring Car race was plagued by thick fog and started under the safety car with the Austin Mini Cooper starting from 30th place. Remaining behind the safety car for a total of five laps, the 61-minute race got underway in time with the pit window opening as the grid all came in for mandatory 60 second stops at the same time making pit lane conditions chaotic. A promising start from Nick Riley, the Mini had made its way up to 29th by the end of the first clear lap alone and was gaining momentum. Unfortunately, the distributor problem which plagued qualifying once again reared its head and the Mini soon returned to the pits. Once back on track and with the issue persisting, Nick Riley continued to suffer with the problematic distributor throughout the race to finish in 33rd place. 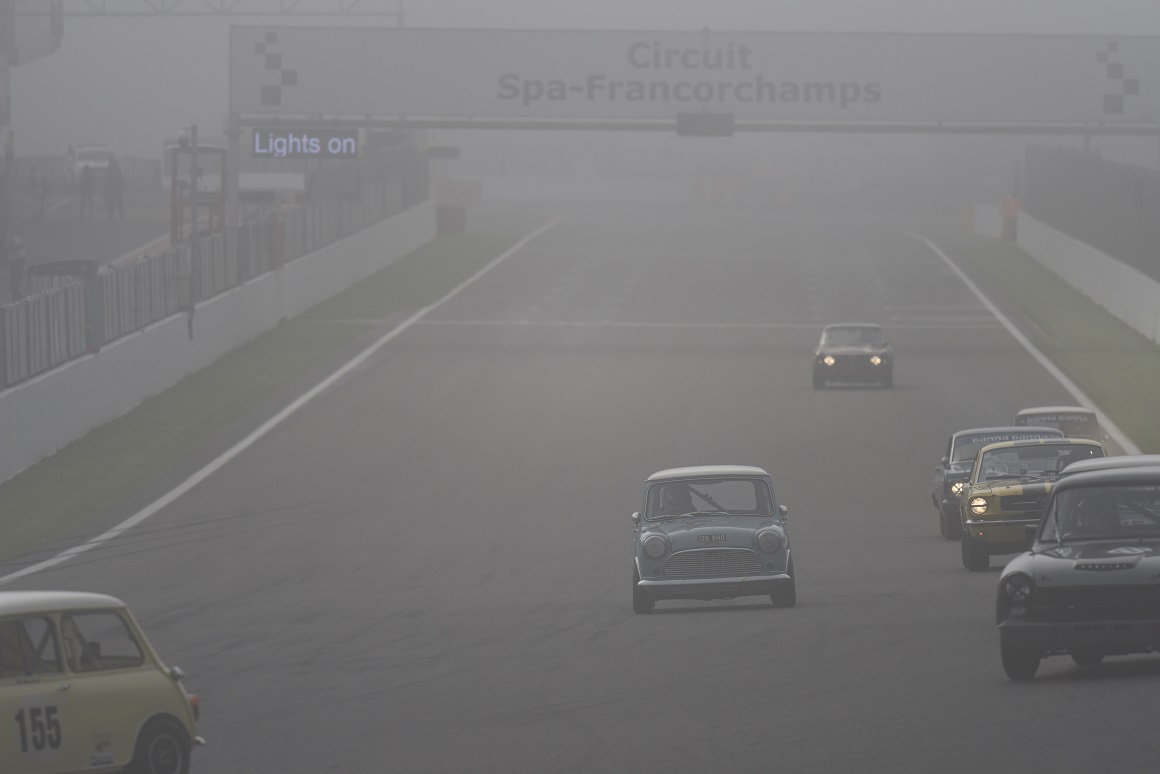 A rolling start got Saturday afternoon’s combined Stirling Moss/Woodcote Trophy race underway with the Lister Knobbly of Jon Minshaw and Phil Keen sitting in pole and the JD Costin Lister close by in second. Eager to maintain the Lister’s impressive racing record so far this year, Chris Ward powered into the lead by the end of the first lap and with another two laps had started to edge away with a gap of over 2 seconds from the now 2nd placed Lister Knobbly. The Jaguar XK120 of Steve and Josh Ward started the race from 44th place on the grid and was holding position well within the field. Lap 9 and the Lister Knobbly started to retaliate as Minshaw closed the gap down to just one second as the Costin got caught up in backmarker traffic. With the pit window now open, the Ecosse XK120 was brought in on Lap 11 and returned to the race with Josh Ward now driving. A lap later, it was the Costin’s pit stop and having stood stationary for the required 60 second period, Chris Ward rejoined the race to maintain 1st place 38 seconds ahead of the Tojeiro of James Cottingham and Max Girado; the previously chasing Knobbly having retired due to a clutch issue.

Josh Ward continued to run well in the XK120 having quickened the car’s lap times by over 30 seconds since the start of the race. With pit stops now completed and the race entering the last 10 minutes, the JD Classics Costin Lister held an unrivalled lead to take an almost lights to flag victory just under a minute ahead of the 2nd placed Lotus 15 of Michael Gans. The Ecurie Ecosse XK120 also claimed position throughout the race to finish in 41st. 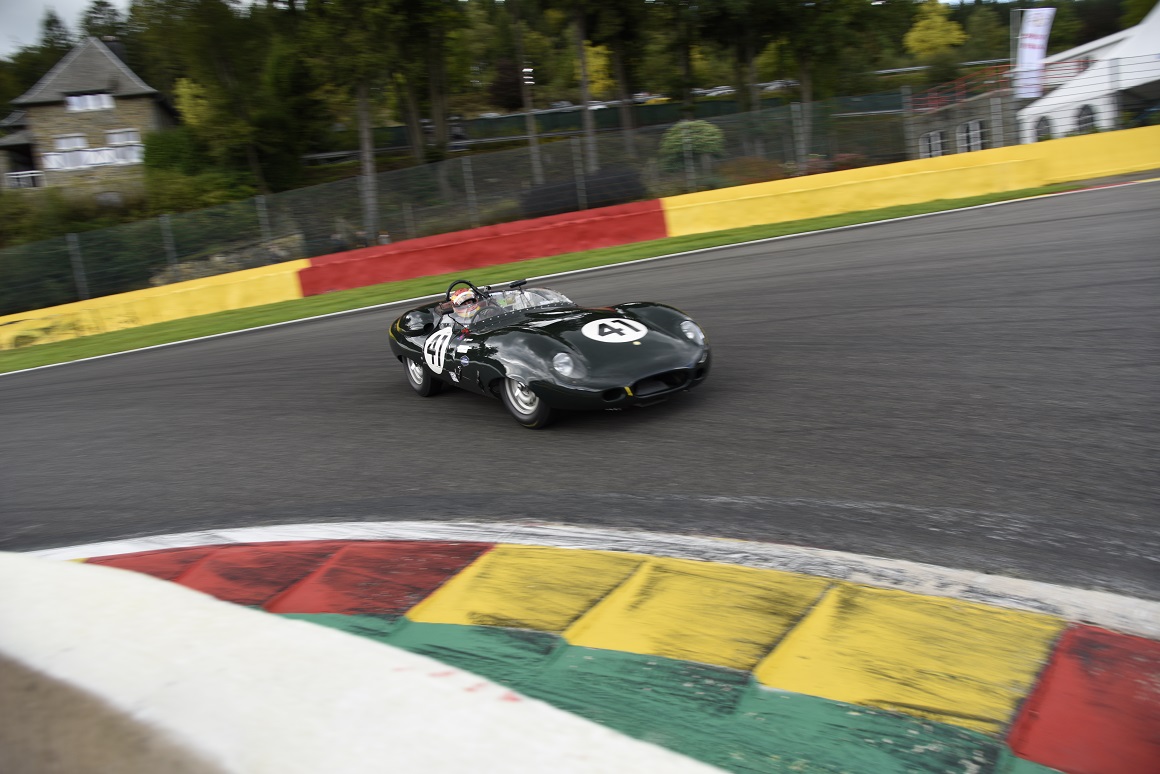 Celebrating the 25-year anniversary of the Spa Six Hours Endurance, over 110 cars lined up on the grid on Saturday afternoon in a bid to claim the coveted title. With the race now shortened to just over five hours due to an overrun in schedule, the lights turned green and the field roared up into the iconic Eau Rouge corner as the pole sitting GT40 of Stippler/Nolte/Funke led the field away. A slow start for the JD Classics GT40 saw Chris Ward slip into third place, however by the end of the first lap the place had been reclaimed and was now running in 2nd. A flying start from the pole sitter and by Lap 3 the front running car of Georg Nolte began to pull away from the field with a 4.3 second lead. Over the coming laps, Chris Ward responded to the front runner’s charge and began to increase the pace.

On Lap 12, the JD Classics GT40 edged into the lead and began to pull away from the pack, however on Lap 22 and with an 8 second lead, the safety car was deployed grouping the field back together and losing Ward his advantage.  With five laps behind the safety car as the stranded Elva GT160 was brought back to the pits, the race resumed with the GT40 of Martin Stretton and Tony Wood now in 2nd place, the GT40 of Nolte having pitted during the safety car. Lap 36 and it was time for the first driver changeover for the JD Classics. Now with Andrew Smith behind the wheel, the car needed to be fuelled; a task which in the true spirit of the period race has to be undertaken by the driver themselves. Once fuelled, Andrew Smith re-joined the race in 9th place and managed to gain another couple of places just as the safety car returned to the track once again.

With two hours to go, the JD Classics car was now running in 2nd place and continuing to pull away from the third placed Wright/Gans/Woulfe GT40 and now in pursuit of the dominant Nolte who had increased his lead and running a lap ahead having made refuelling stops whilst under the safety car thus gaining time. With a large influx of cars pitting for their final driver changes and refuelling, the team decided to leave Andrew out for a few extra laps to avoid delays at the now busy refuelling pumps. On Lap 73, the leading GT40 came in for its final stop giving Andrew Smith his opportunity to bridge the time gap and close in on the lap long lead that Nolte had sustained. Making good his escape, by the time Nolte had re-joined the race, JD Classics were now in the lead but with another stop still to make.

A lap later and the safety car was on track once again; an opportunity the team took advantage of calling Andrew Smith in for the car’s final stop. A speedy changeover and Chris Ward was back in the driver’s seat as he drove into the fuelling station. An impressive sub 4-minute refuelling, the GT40 re-joined the field maintaining the lead having pitted at the optimum time. As the race entered its final 30 minutes, Chris Ward charged the JD Classics car around the challenging Francorchamps circuit with the 2nd placed Nolte on the chase but one lap down. As the minutes ticked ever closer to the chequered flag, Chris Ward found himself caught up in backmarker traffic making for precarious on track conditions with the competition at its fiercest. Despite this, the JD Classics GT40 powered its way to the team’s first Spa Six Hours victory a lap ahead of the second placed car of Georg Nolte, Franck Stippler and Michael Funke signalling the end of a successful weekend’s racing for JD Classics with two dominant wins at this year’s Spa Six Hours meeting. 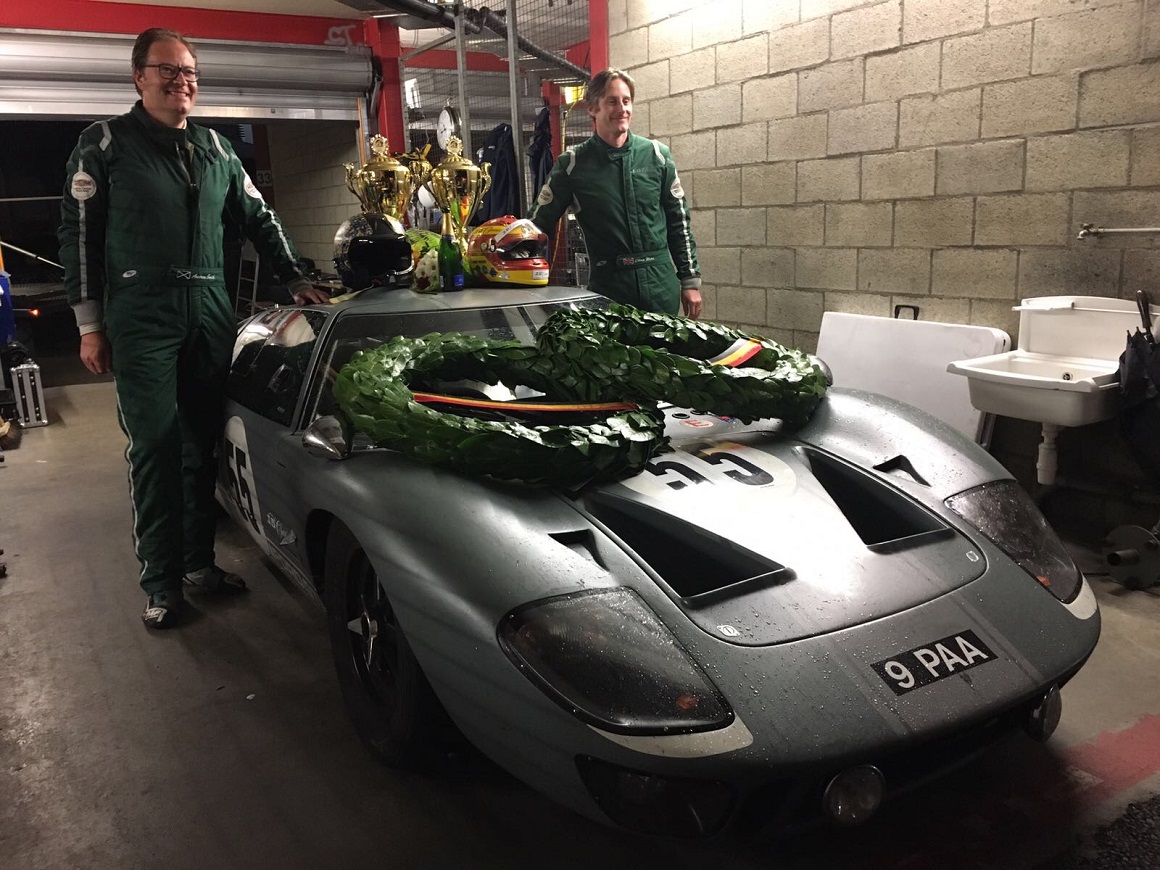