With an entry list of over 1000 cars taking part across the weekend in displays, demonstrations and on-track competitive racing, the Silverstone Classic has continued to grow in popularity with attendance at over 100,000 people. Established as one of the largest classic car festivals in the world, JD Classics were pleased to compete with seven cars over the three day period.

The Costin Lister of Chris Ward made the weekend’s debut for JD Classics as it headed out to contend with the large field of pre-1961 sports cars for the Stirling Moss Trophy qualifying session. 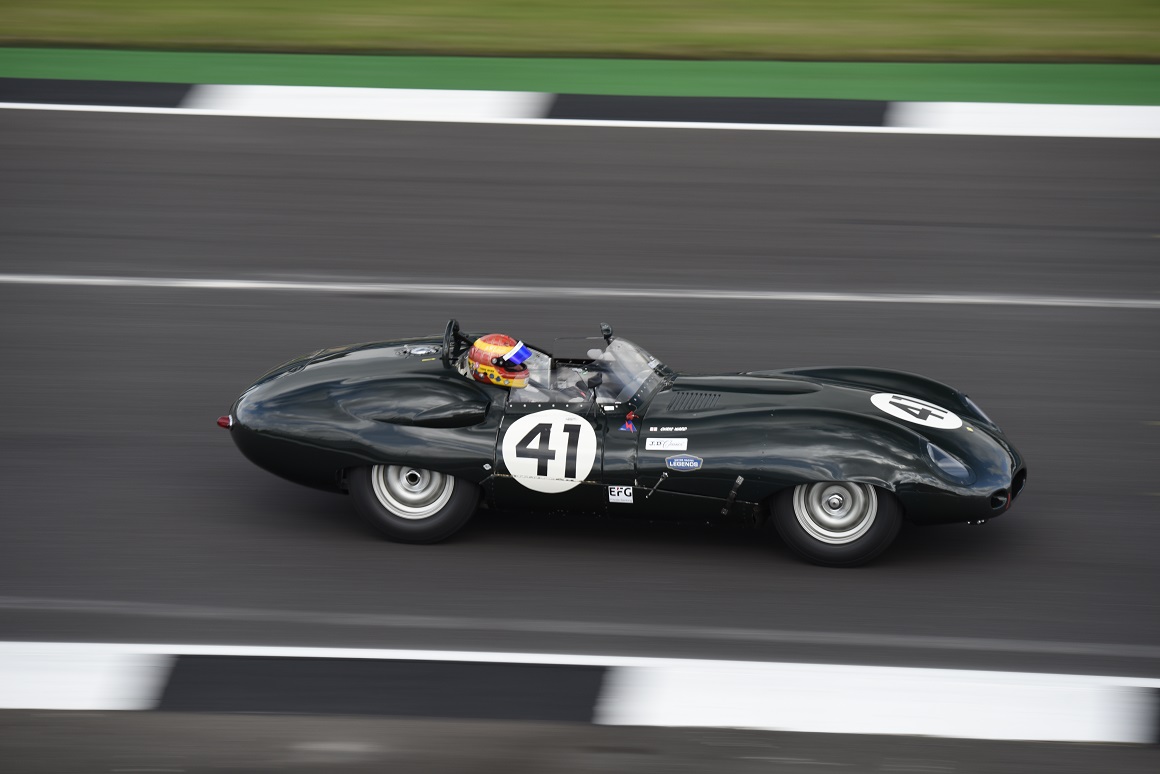 Dry but very windy weather made for challenging on track conditions for the field with an array of Lister’s Lotus’s and Lola’s all vying for the coveted pole position. Setting a first lap qualifying time of 2:43.1, Chris Ward continued to improve on this with every lap running in 3rd place by Lap 7. Coming into the pits for a quick check over, the Costin soon returned to the track and with the session nearing its end produced a flying lap time of 2:24.6 to qualify in pole position. As the position looked set for the JD Classics team, a last minute surge from the Lotus 15 of Graham and Ollie Bryant clinched 1st place on the final lap to claim pole ahead of Sunday’s race with Chris Ward qualifying in a close 2nd place with just 0.599 seconds between the two. 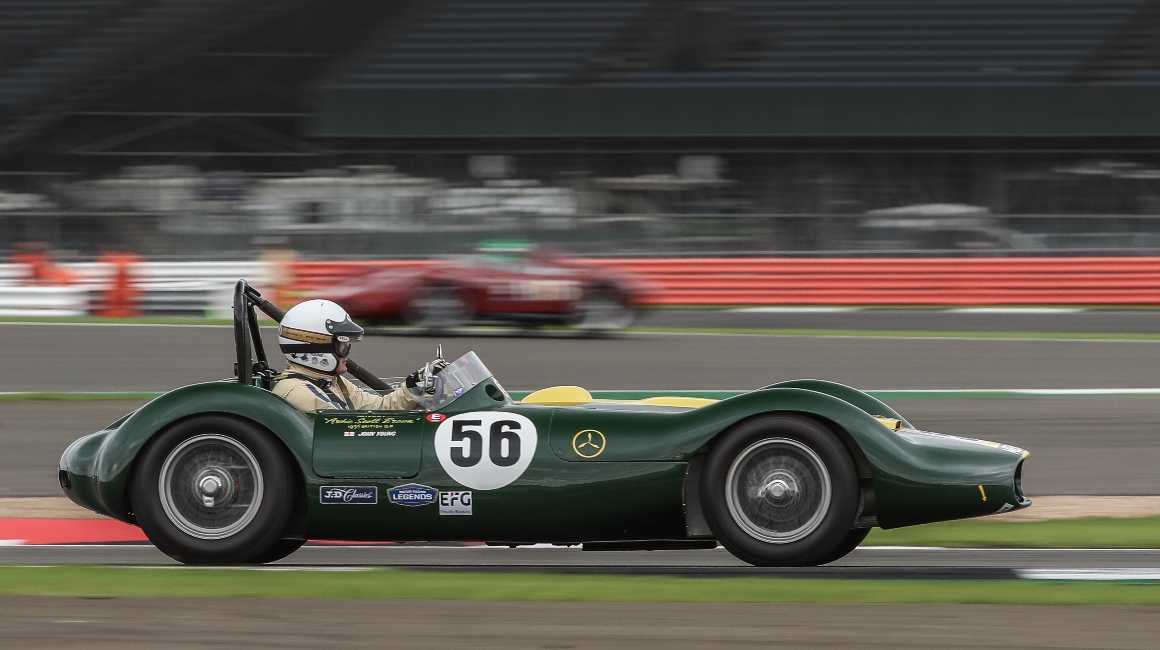 With the rain continuing to hold off, the Woodcote Trophy field exited the pits for their 27 minute qualifying session with three JD Classics cars in contention for position within the field; the 1954 Lister Maserati, 1954 Cooper T33  and the 1951 Jaguar XK120 of Steve and Josh Ward. A field comprised of 45 cars meant the competition was going to be fierce. Sharing the weekend’s Cooper drive with Andrew Smith, Chris Ward drove the session’s first section charging the car into 2nd place within three flying laps. Similarly, the Ecurie Ecosse XK120 was also performing well with Steve Ward completing a couple of warm up laps before passing to Josh Ward to complete the session. John Young captained the ex-Archie Brown Scott Lister Maserati in its debut racing appearance with JD Classics qualifying in a respectable 13th place. Having handed the drive over to Andrew Smith, the Cooper returned to the session in a bid to catch the front running Jaguar D-Type of Gary and John Pearson. Despite producing an impressive fastest lap of 2:29.8, half a second faster than last year’s pole position lap time produced by the Cooper, competition proved tougher and so the T33 qualified in 3rd place behind the Pearson’s D-Type and the Cooper T38 of Fred Wakeman and Patrick Blakeney-Edwards.  Qualifying in 29th place overall, the Jaguar XK120 of Steve and Josh Ward’s fastest lap was an impressive 35 seconds faster than their best time at Silverstone Classic in 2016. 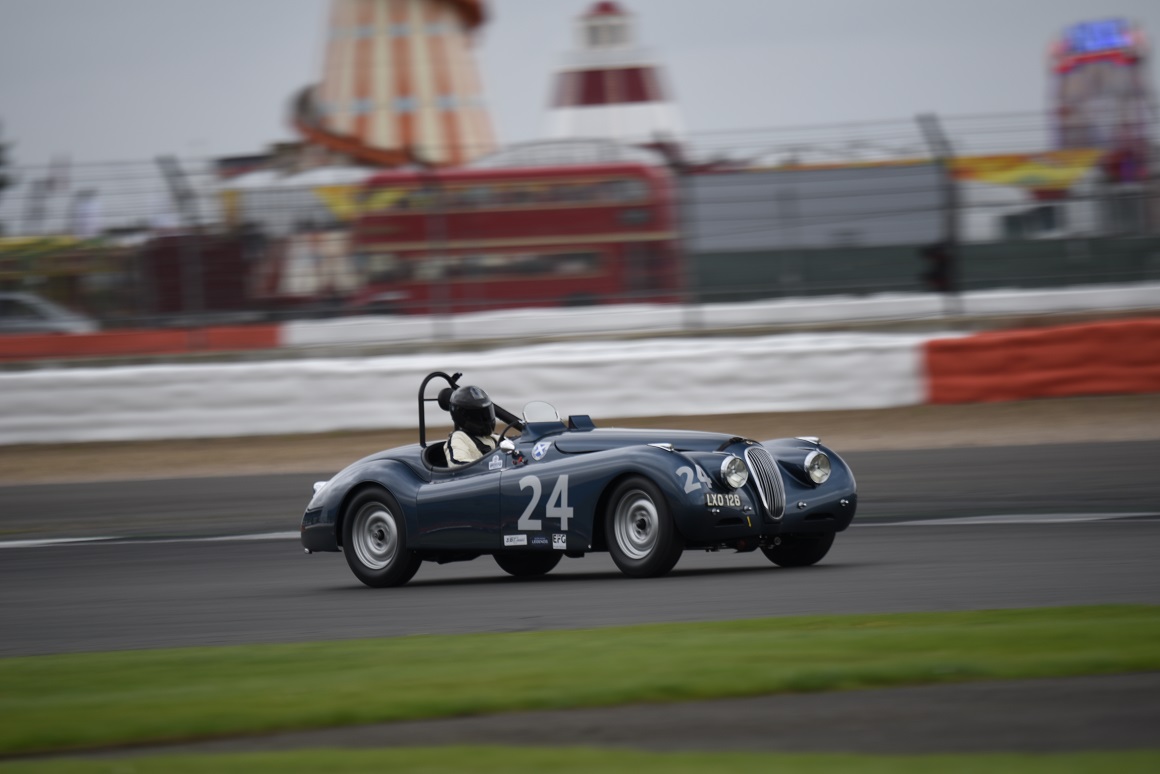 Improving on last year's quickest time at Silverstone by over 30 seconds, the driving duo of Steve and Josh Ward qualified in 29th place within the Woodcote Trophy field.

Saturday morning’s Stirling Moss Trophy got off to a rolling start as led by the pole sitting Lotus 15 of father son pairing Ollie and Graham Bryant with the JD Classics Costin Lister following closely in 2nd place. A slow start for the pole sitting car instantly offered the advantage to Chris Ward as he stormed into the lead ahead of the now second placed Lister Chevrolet of Gary Pearson. With the track now clear ahead, the Costin Lister began to pull away from the field and by Lap 4 had created a 9 second gap from the rest of the 40-car grid. Having slipped back into 5th place at the start line, by Lap 5 the Lotus 15 of Ollie Bryant had fought its way passed the Lister Chevrolet and into second place. Continuing to apply the pressure over the next couple of laps, the Lotus continued its chase of the JD Lister, however a technical issue on Lap 8 ended the race for the Bryant’s. 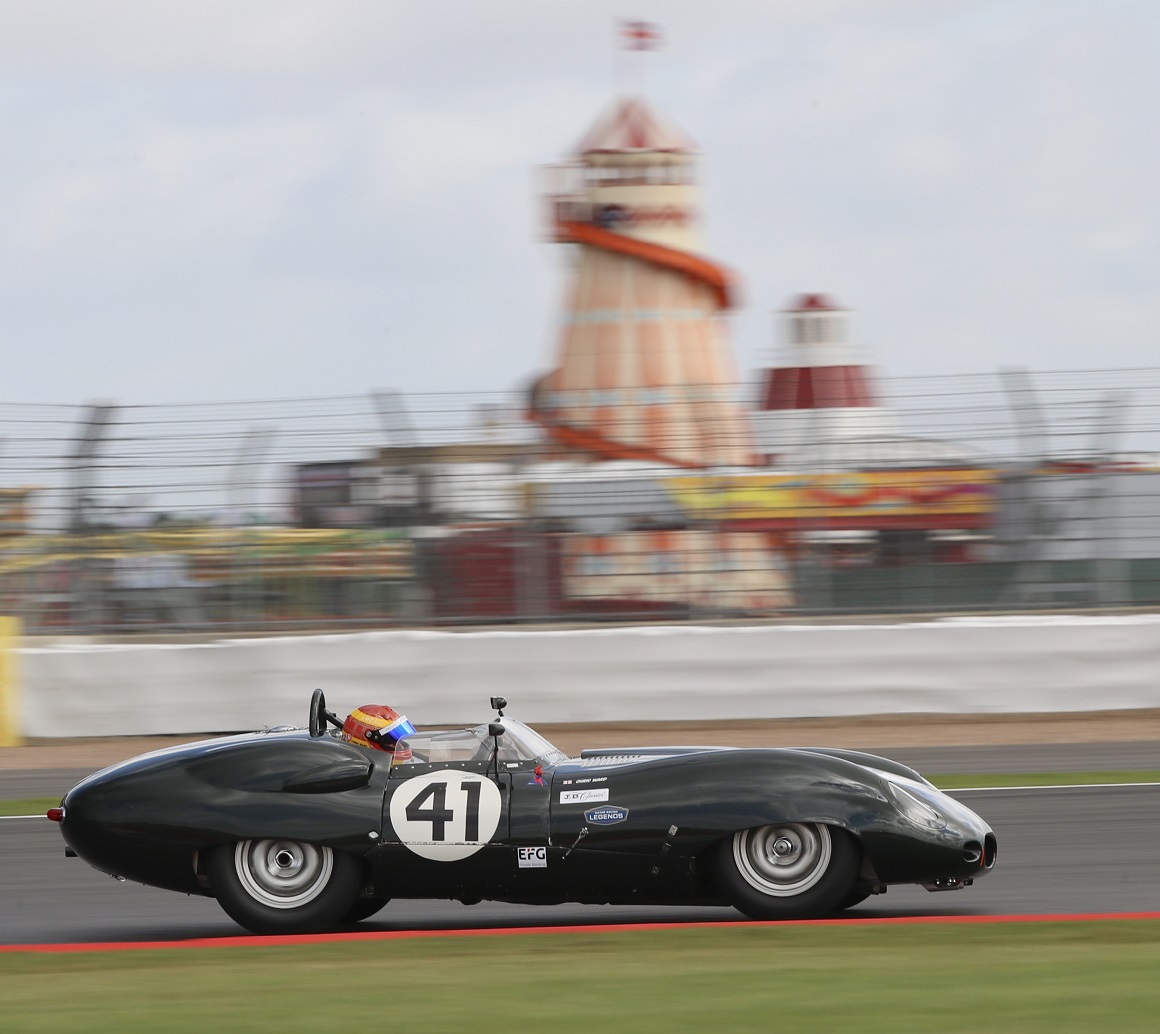 A strong start from the JD Classics Costin Lister of Chris Ward set the precedent as it raced to an impressive victory within the Stirling Moss Trophy.

With the pit window now open and stops compulsory between the 20-40 minute mark, the team brought the Costin in on Lap 11 with a 13 second lead over the now second placed Chevrolet of Richard Kent. Having completed the 60 second stationary stop quickly, Chris Ward re-joined the race. With just over 20 minutes left and now running in 2nd place, the leading Lotus 15 of Rob Barff came into the pits allowing the JD Classics car to regain the lead. By Lap 15 and with just over 5 minutes of the race remaining, Chris Ward had distanced the Costin from the rest of the field and despite being caught in traffic by some backmarkers, charged to a dominant victory 14 seconds ahead of the second placed Lotus 15 of Rob Barff also achieving a fastest lap of 2:24.018. 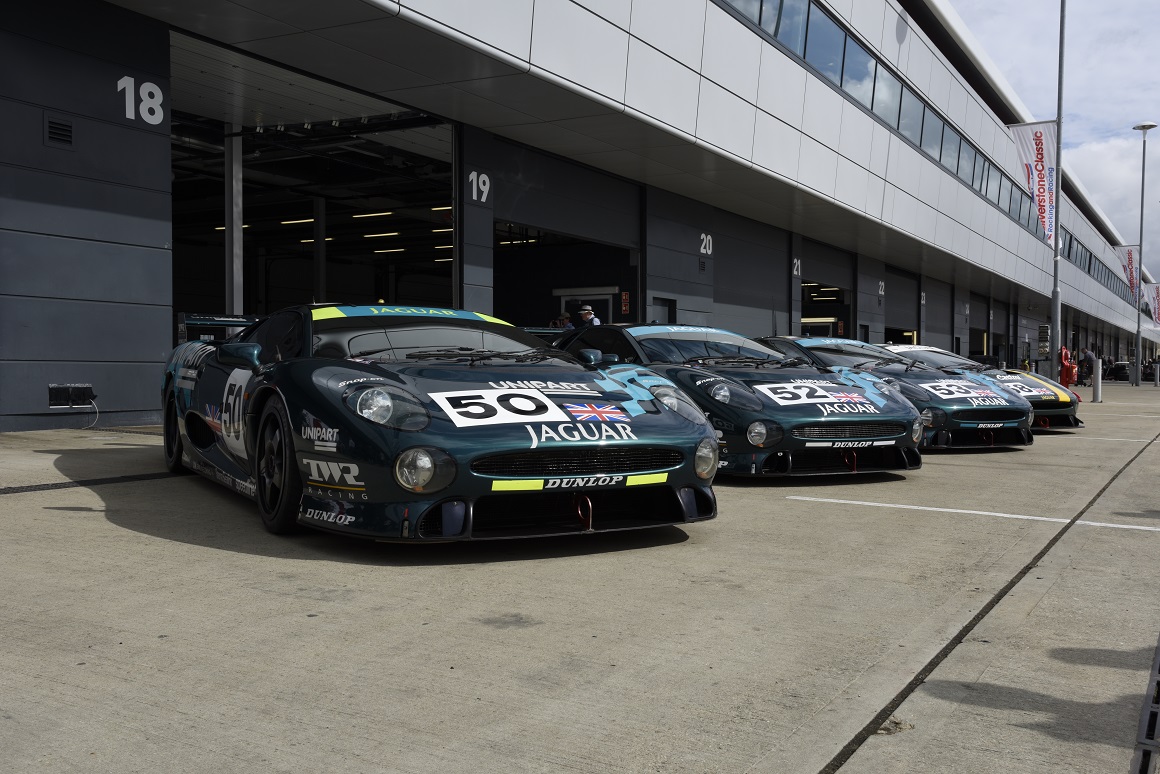 The JD Classics Jaguar XJ220 was demonstrated by racing driver David Brabham who raced it at Le Mans in 1993.

This year Silverstone Classic celebrated the 25th anniversary of the iconic Jaguar XJ220. Culminating special field of over 40 XJ220, JD Classics were pleased to be involved in this year’s parade showcasing their XJ220 LM. Competing at the iconic Le Sarthe circuit in 1993, the car was raced at Le Mans by John Nielsen, David Brabham and David Coulthard and in keeping with the car’s history, David Brabham returned to the drivers seat once again to demonstrate the car during Saturday afternoon’s very special display along with Tom Walkinshaw's widow Elizabeth. 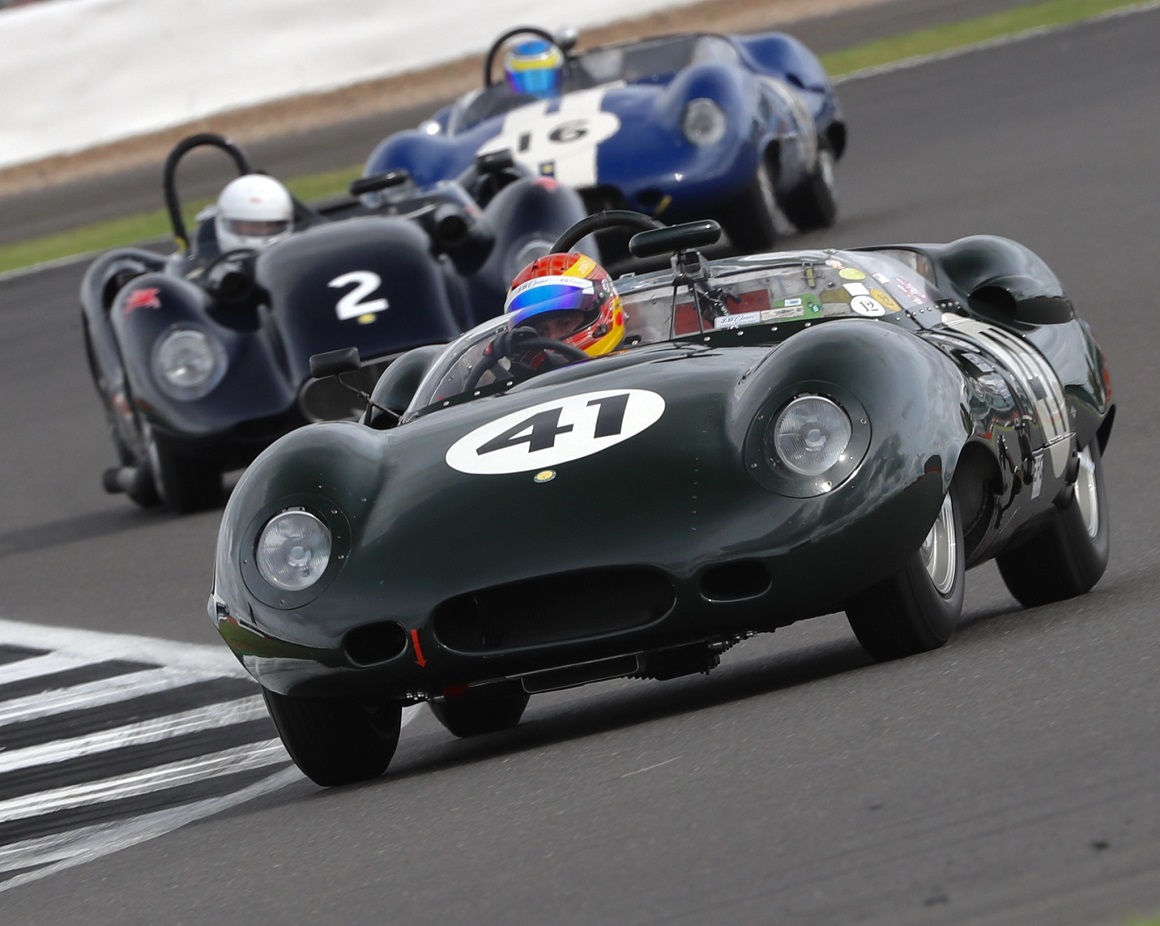 The first of a two race round of the Jet Super Touring Trophy got underway on Saturday afternoon as the rain that threatened to plague the day’s racing continued to hold off. Having suffered with technical gremlins during Friday’s qualifying, the Bastos Rover and TWR XJS were starting the race from further down the field as the large field was split into two grids and both led through into a rolling start ahead of the 20 minute race. As the lights turned green the XJS of Chris Ward was quickly on the attack and by the end of Lap 2 had powered through the field by 15 places. Equally, the Bastos Rover of Steve Soper continued to storm its way round the 3.6mile circuit as he continued to improve on every previous lap time. As the chequered flag fell, both JD touring cars completed the race having improved on qualifying positions with the XJS of Chris Ward finishing third within its class.

The penultimate race of the weekend for JD Classics, the Woodcote Trophy field lined up behind the pole sitting D-Type of Gary and John Pearson as the 50-minute race got underway. Starting from third, the JD Classics Cooper T33 of Andrew Smith had to take avoiding action on Lap 1 to avoid the Cooper T38 of Fred Wakeman and Patrick Blakeney-Edwards and so slipping down into 4th. A temporary setback, another lap ensured the Cooper back to its original starting position amongst the field of pre-1956 sports cars. Having qualified in 13th, John Young’s Lister Maserati had already claimed two positions and was running in 11th by the end of Lap 2.

With the Pearson D-Type maintaining the lead, the JD Cooper began to feel the pressure of the pursuing Maserati 250S of Martin Stretton and Richard Wilson but managed to pull back into a comfortable position until the pit window opened. First to be brought in for the stop was the Cooper on Lap 8 which quickly returned to the race in 13th place now with Chris Ward commanding the drive. Another lap in and it was the turn of the Lister Maserati which completed its compulsory 60 second stop without fault. Not far behind was the distinctive blue Ecurie Ecosse XK120 of Steve Ward who handed the drive over to Josh Ward. 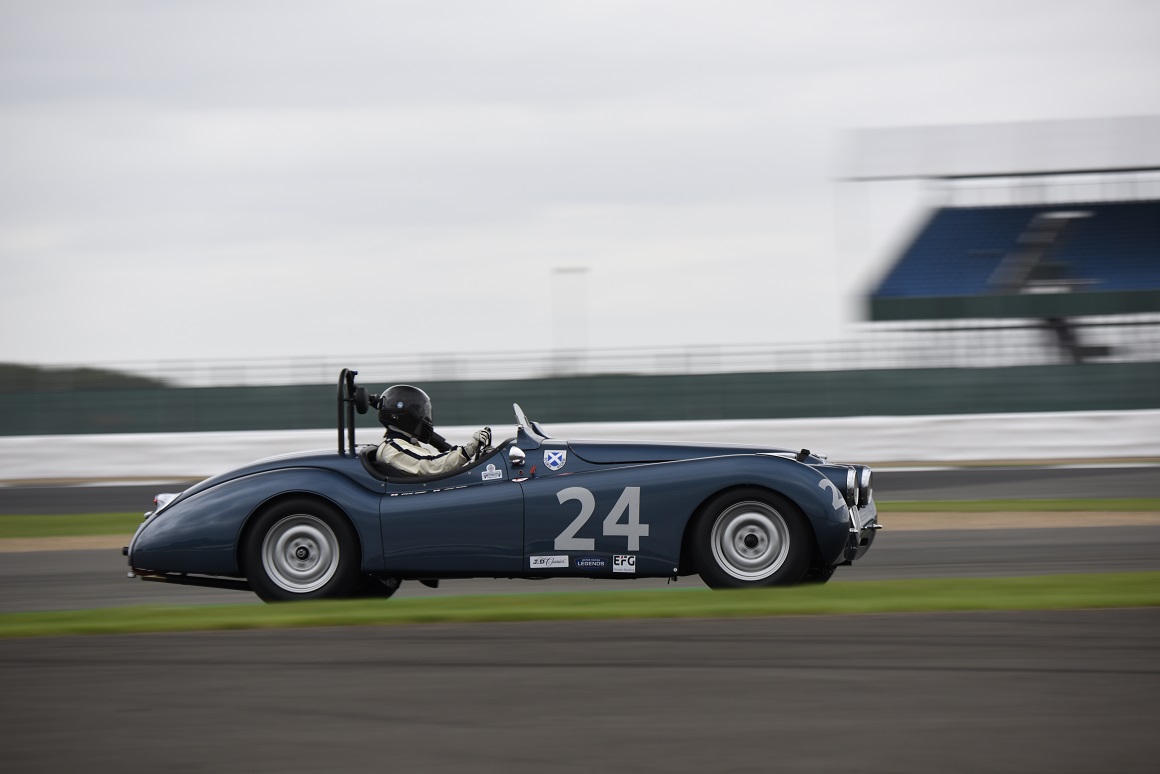 The Ecurie Ecosse XK120 of Steve and Josh Ward ran consistently despite an early race spin.

As the race entered its latter stages, the Cooper T33 continued its charge towards the front of the pack. Having pitted early in the allotted window, Chris Ward was able to take advantage of the clearer track ahead of him as the field continued to pit thus gaining five places in two laps to be running in 8th place.Coming into the final 15 minutes of the race, the Ward’s Jaguar XK120 was running well despite having a spin early on in the race having hit an oily patch while the Lister Maserati was also gaining ground and running in 9th place. 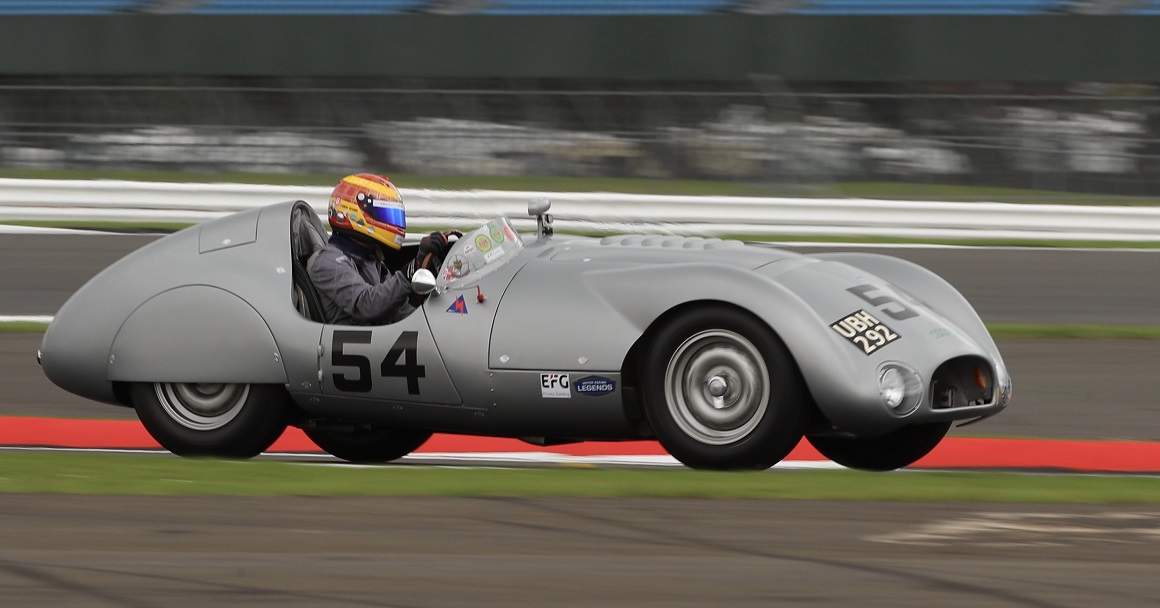 Another podium for the JD Classics team with the Cooper T33 and a second place within the Woodcote Trophy race.

As the finish edged ever closer, the Cooper T33 was storming through the field and now in 2nd place ahead of the previously front running D-Type of Gary and John Pearson which had been plagued with a mis-fire. As the chequered flag fell the JD Classics Cooper finished the race in a well-deserved 2nd place behind the Cooper T38 of Fred Wakeman and Patrick Blakeney-Edwards. Another impressive drive was that of John Young in the Lister Maserati; its first competitive outing as part of JD Classics, he stormed the car to 5th place just over half a second off gaining 4th. The Ecurie Ecosse Jaguar XK120 gained places towards the end of the race to complete the Woodcote Trophy in 32nd place. 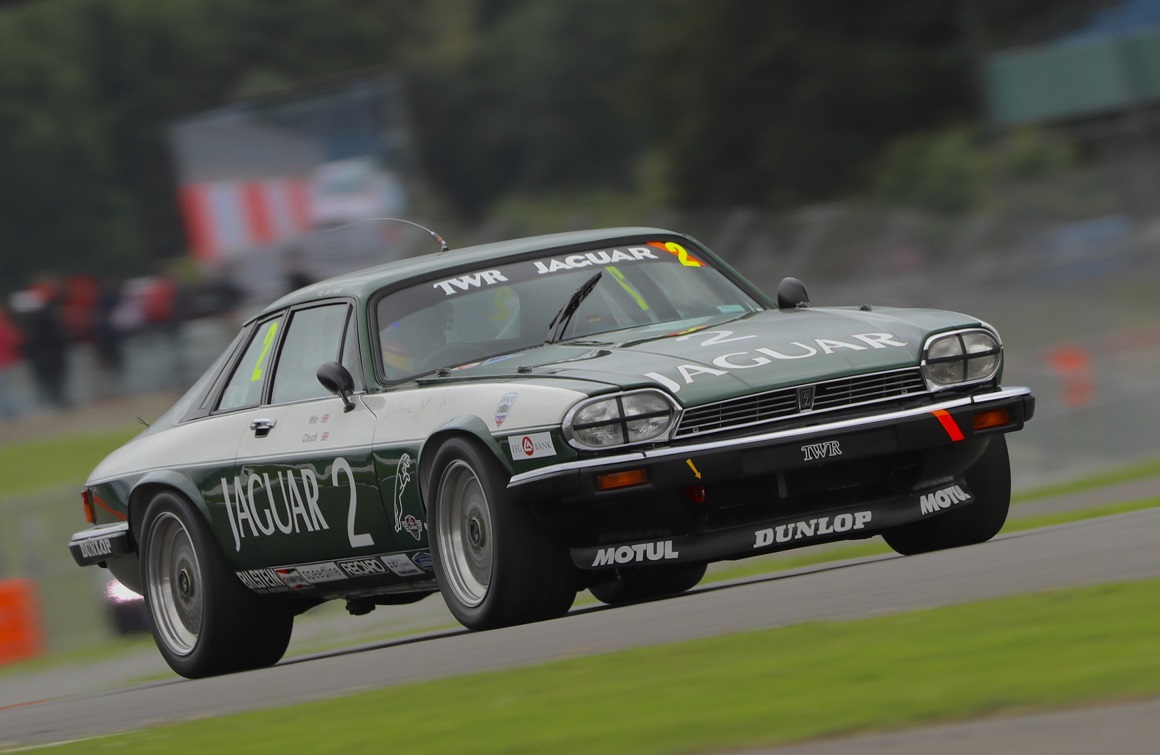 Having campaigned a total of seven cars over the three-day event, the Bastos Rover and Tom Walkinshaw XJS were to round off this year’s Silverstone Classic with the weekend’s final race; the Jet Super Touring Trophy. With the grid decided depending on performance in Saturday’s first race, and then split into two internal grids, the Group A cars and 1991 onwards Super Touring grid, the Rover and XJS lined up in 8th and 23rd respectively. A heavy down pour of rain before the race meant that both cars were changed to wet tyres in order to combat the treacherous on-track conditions and with the pace car leading both grids around the first two laps of the race, it was clear to see the standing rain would cause issues during the 20-minute race. Once racing got underway and the pace car had returned to the pits, the weather proved difficult to even the most experienced driver with Chris Ward experiencing a spin at the entry to the start finish straight before quickly correcting and re-joining the race. With all cars remarkably finishing the race in spite of the weather, both JD Classics touring cars handled the conditions well with the Bastos Rover finishing 4th in class and the TWR XJS 5th in class marking the end to another year’s Silverstone Classic. 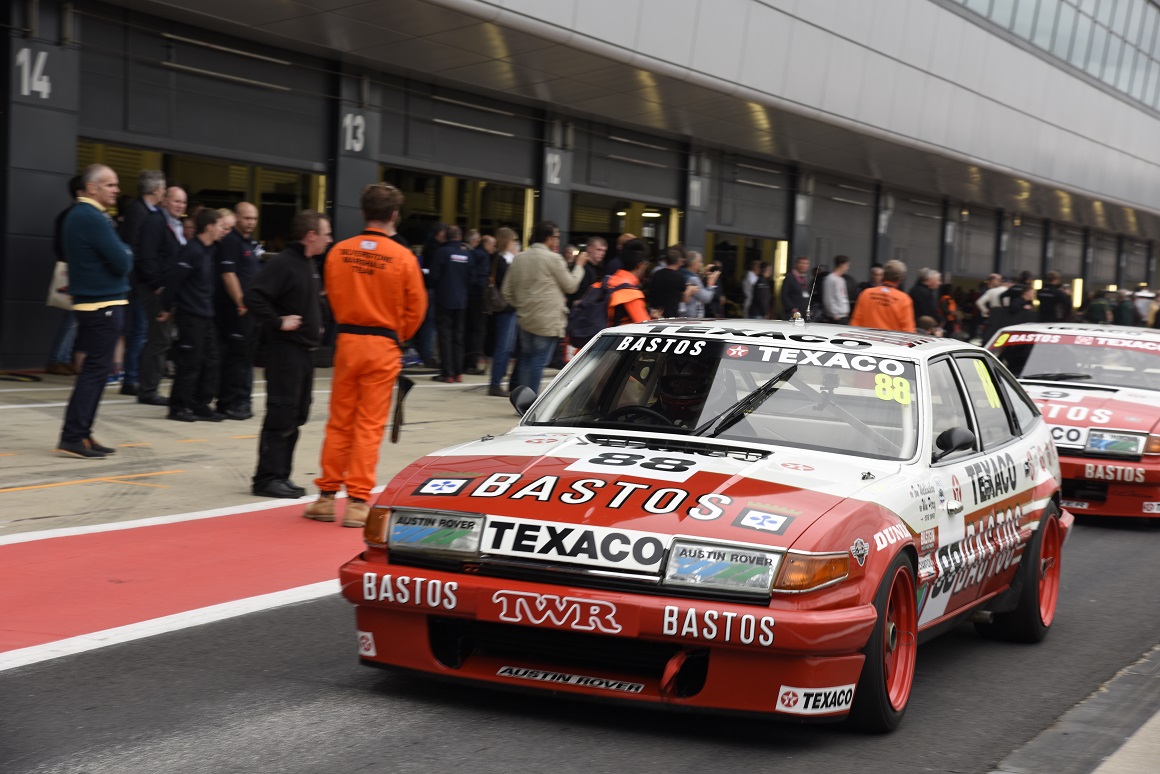 The Bastos Rover of Steve Soper overcame a tough race to finish 4th in class within the Jet Super Touring Car Trophy.