Rounding off this year’s Monterey Classic Car Week, Pebble Beach Concours d’Elegance gathers 200 of the World’s finest classic cars and motorbikes on the famous 18th fairway of the Pebble Beach Links Golf in Monterey. JD Classics were once again pleased to be invited to enter the event with both a 1954 Bentley R-Type Continental and a customer’s 1962 Shelby 260 Cobra which had recently undergone a JD Classics concours restoration.

One of just five pre-production Cobras ever built, chassis number CSX 2005 was shipped from AC Cars base in Surrey to Shelby America, California. Following a colour change from white to black, the car was loaned to Universal Studios and featured heavily in the 1964 film The Killers. Post filming, the car was bought by the Carroll Shelby School of High Performance Driving and went on to be painted in the Shelby American team colour as per 1964; Viking Blue. During its tenure at the school, the car was driven by many a noteworthy name including actor James Garner and well respected automotive journalist John Jerome. Passed between subsequent owners, CSX 2005 was bought by Donald Bell in 1975 and stayed under his ownership for 35 years. In 2016, JD Classics purchased this historically significant Cobra before being bought by a customer who commissioned concours restoration work in preparation for this year’s Pebble Beach concours d’Elegance. 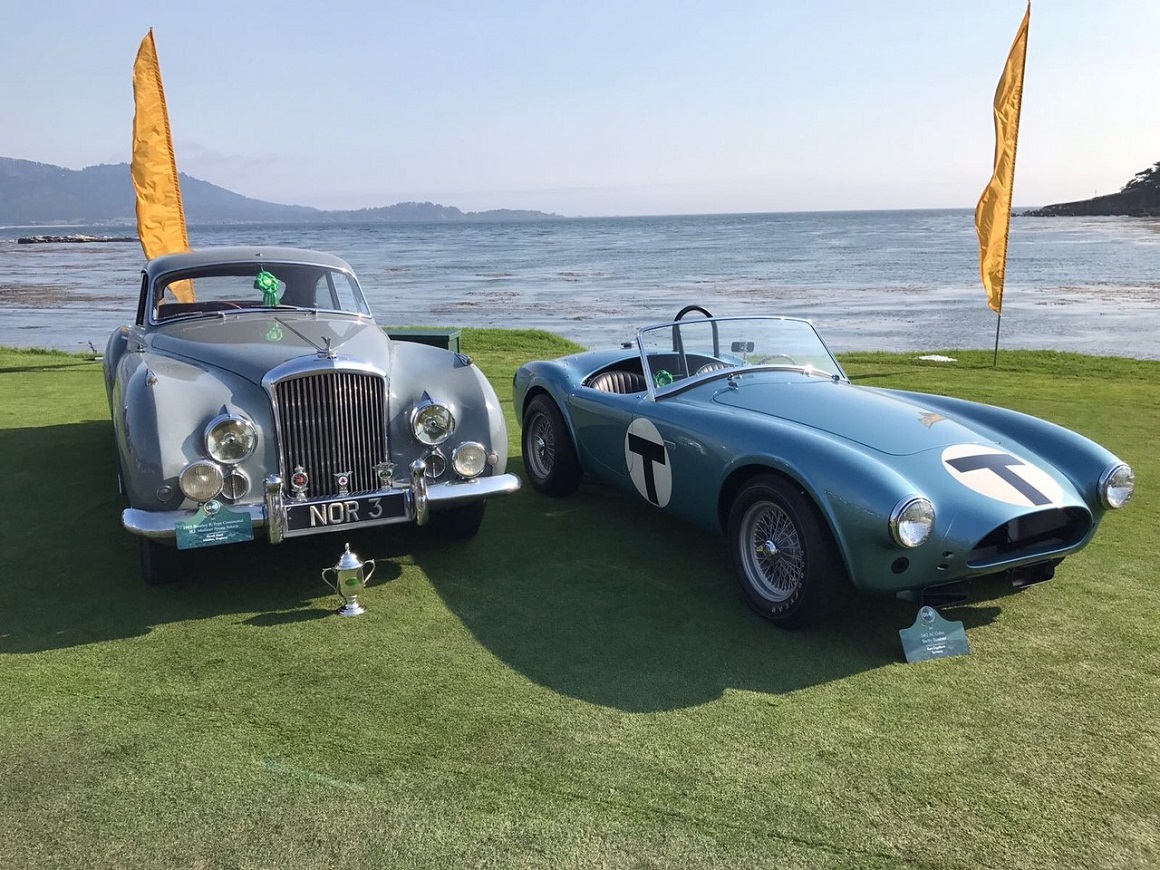 JD Classics were pleased to be awarded the coveted FIVA award for the best preserved and regularly driven car with their unrestored 1954 Bentley R-Type Continental.

The 1954 Bentley R-Type Continental was bespoke ordered from new by world-class golfer Philip F. Scrutton. Coach built by H.J. Mulliner, the car was specified with many unique features including one-piece tail lights and cut away rear wheel arches while the instruments and steering wheel were colour matched to the red leather upholstery all adding to its rarity. Its next owner was Stanley W. Hailwood, a successful pre-war MG and motorcycle racer and father to renowned racing driver Mike Hailwood. In 1968, it was sold to a family in Australia where it remained until it was bought by JD Classics in 2015 and returned to the UK. Remaining completely unrestored, Pebble Beach is its first public outing in over fifty years.

Sunday’s concours d’Elegance is preceded by the Tour d’Elegance which sees participating cars drive the 80-mile costal drive along the Monterey Peninsula across Big Sur before heading back towards Carmel-by-the-sea. With successful completion of the tour adding favour to the car’s standing at the final concourse, the JD Classics Bentley R-Type Continental completed the tour successfully.

Both the Bentley and AC Cobra gathered early on Sunday morning ahead of the concours d’Elegance with both cars drawing much attention within the respective classes; the AC Cobra in Class 0-1:Postwar Open and the Bentley in Class L-2: Postwar Preservation. With the competition stronger every year, JD Classics were privileged to receive the FIVA postwar award for the best preserved and regularly driven car with the Bentley R-Type Continental.

Derek Hood, Managing Director of JD Classics, said: “With more than 100 judges, many of whom have over 30 years’ experience judging events like this, the Pebble Beach Concours d’Elegance is the most competitive classic car event in the world. Even for our two entries to be invited to compete is an absolute privilege, let alone our Bentley R-Type preservation being awarded the FIVA Postwar Trophy. It’s another standout example of the dedication and expertise of all our craftsmen at JD Classics’ Maldon headquarters.”