Returning to Snetterton for the first time since winning the Autosport 3 hour race in 2014, JD Classics this weekend campaigned their powerful 1973 Ford Cologne Capri at the weekend’s Aston Martin Owner’s Club event. Competing in Motor Racing Legends Historic Touring Car Challenge (HTCC), the field took to the track on Saturday morning for the 30 minute qualifying session.

The Ford Cologne Capri started the 60 minute HTCC race in pole position at Snetterton this weekend.

Hot and sunny conditions set the scene as Chris Ward and the JD Classics Capri completed just three flying laps before achieving pole position. Returning to the pits, it was the BMW M3 E30 of Tom Houlbrook and fellow Ford Capri of Steve Dance vying to steal the coveted pole position and with both running just shy of a second behind the JD Classics touring car, Chris Ward returned to the track in a bid to achieve a faster lap time. Responding to the pressure, just one more flying lap was enough to produce a lap two seconds quicker than previous securing the JD Classics Capri pole on the grid with an impressive lap time of 2:04.504, just over four seconds ahead of the second placed Capri of Steve Dance.

As Saturday afternoon’s 60 minute race approached, the temperature had now reached the early 30s proving the race was going to be challenging for both driver and car. A rolling start, Chris Ward led the 16 car field through the lights as the race got underway. With a full fuel load, Chris Ward paced himself during the early stages of the race. Remaining in the lead, the pit window opened and on Lap 17 the JD Classics Capri came into the pits for the mandatory stop. Whilst remaining stationary for 60 seconds, the team checked over the car and Chris Ward returned to the race with a lead of well over a minute ahead of the Capri RS2600 of Steve Dance. 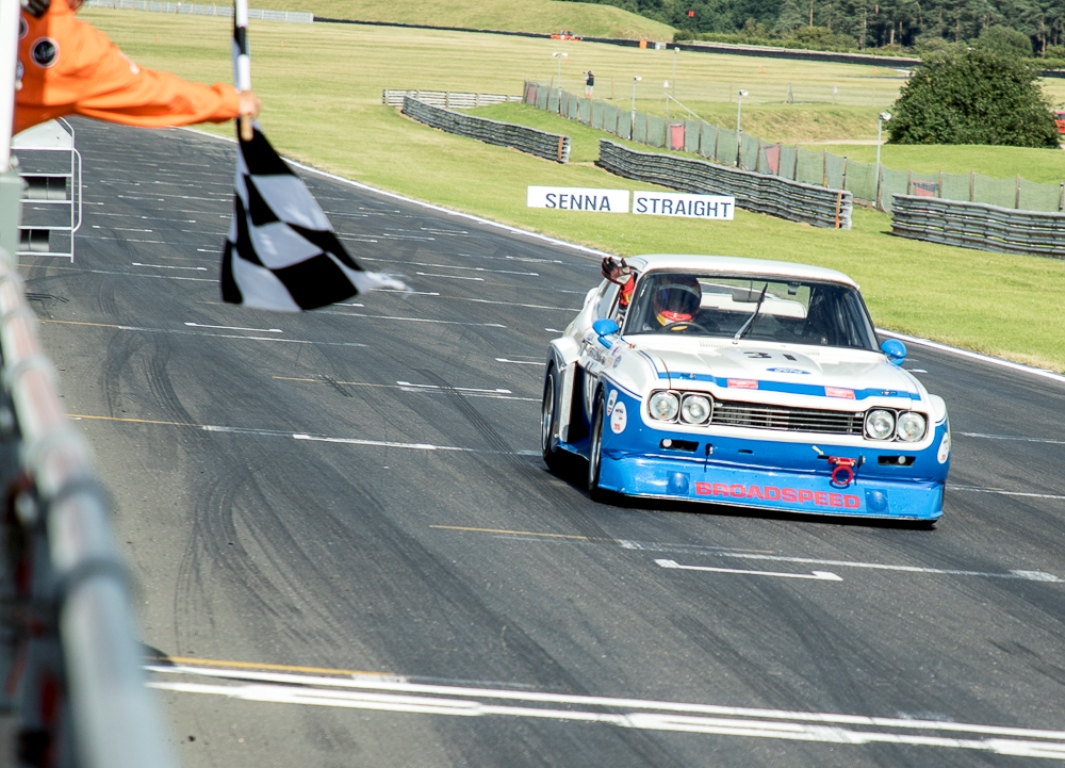 A lights to flag victory for the JD Classics Ford Cologne Capri of Chris Ward.

As the race entered its latter stages, Chris Ward and the Ford Capri began to pick up the pace and continued to pull away from the rest of the field achieving a fastest lap of the race of 2:04.885 and taking the chequered flag over a lap ahead of Steve Dance’s second placed Capri RS2600.
Speaking of his lights to flag victory, Chris Ward said “It is a privilege to drive the Cologne Capri again. It has been two years since we ran the car competitively and to see the reaction of fellow competitors and spectators to the car was fantastic. The car performed faultlessly - another great team effort by JD Classics”.