In 2013, JD Classics were privileged to welcome John Surtees to their headquarters in Maldon, Essex and, along with James Toseland he captivated our guests with stories from his illustrious career. The only driver to have acheived World Championships on both four and two wheels, his amazing contribution to motorsport will continue to stand the test of time. A friend to JD Classics, he will be remembered fondly by the whole team.

The below article offers some fond memories of his visit to JD Classics back in 2013...

On Sunday 27th October, JD Classics opened their gates once again for another of their breakfast morning events. With over 1000 visitors to the Maldon based head-quarters, the final breakfast morning of 2013 proved to be the most successful to date with visitors not only getting to view the vast and varied collection of both competition and road cars spread across seven showrooms but also see where JD Classics’ 45 in-house specialists restore some of the most classic examples in existence back to their period best. 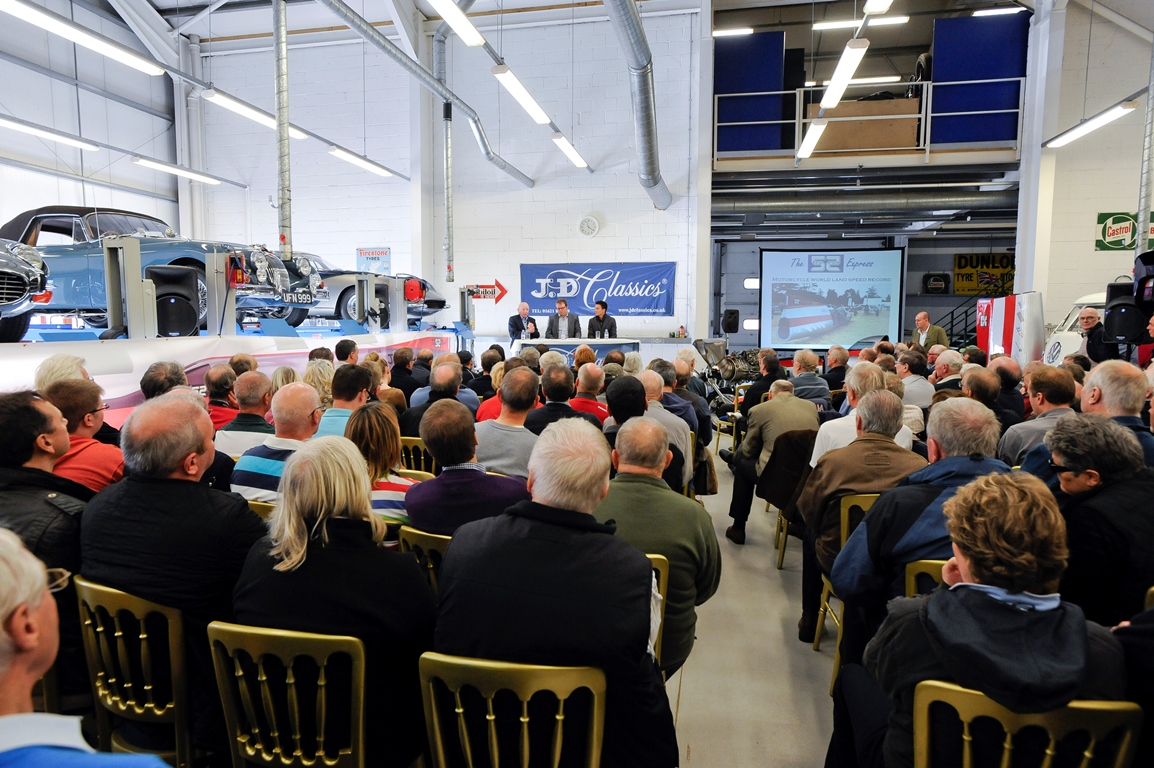 The main workshop brimming with one of the biggest crowds JD Classics have had to date.

Having played host to many a motor racing legend at previous JD Classics breakfast mornings including Win Percy and the great Sir Stirling Moss, JD Classics were equally excited to be welcoming not one but two influential figures from the World of motorbike racing; John Surtees OBE and James Toseland. With the main workshop bursting at the seams with the buzz of an excited crowd awaiting the arrival of the guests of honour, John and James took to the stage at 10.30am and were received by an elated applause from the heaving crowd. 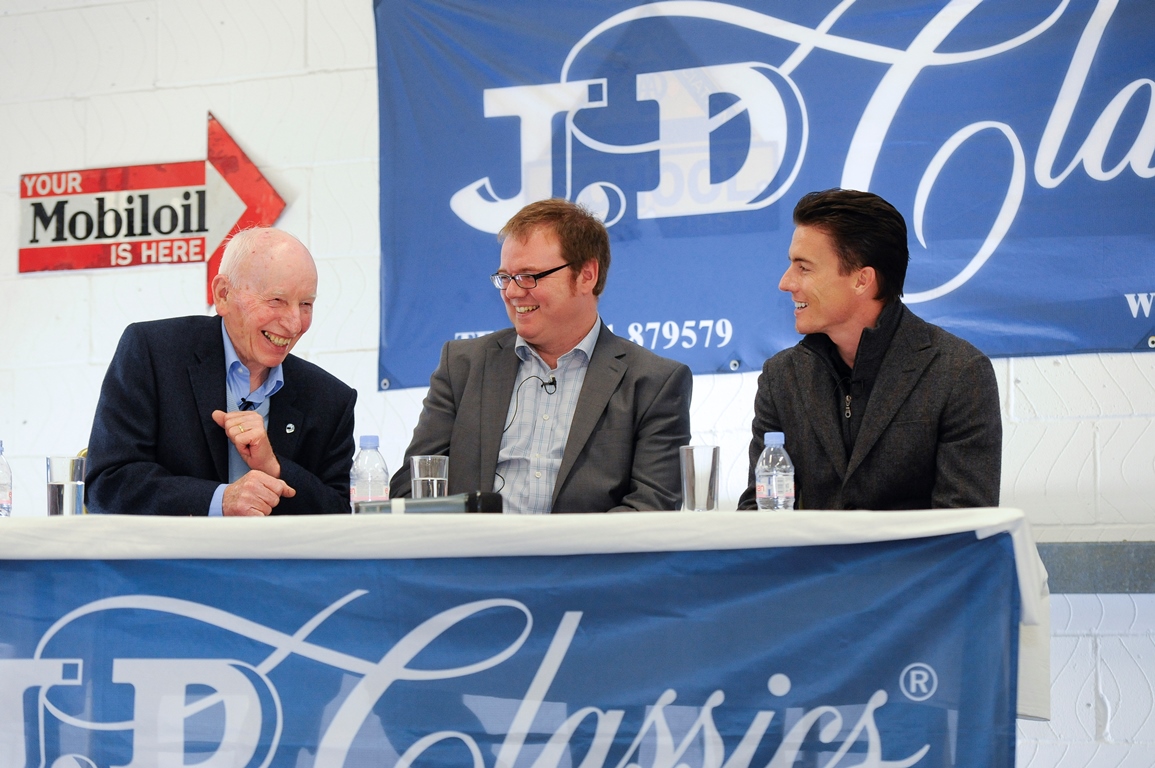 Together with compare Damien Smith, John Surtees and James Toseland took to the stage in the main workshop.

Residing in the main workshop throughout the morning’s talk was two of John Surtees’ motorcycles from his personal collection including the Vincent Grey Flash which featured prominently in his early riding career in the 1950s when he embarked on his illustrious motorcycle career. Also on static display from John’s personal collection was his Norton 500cc F Type motorcycle which he rode as his first factory sponsored ride in 1955. 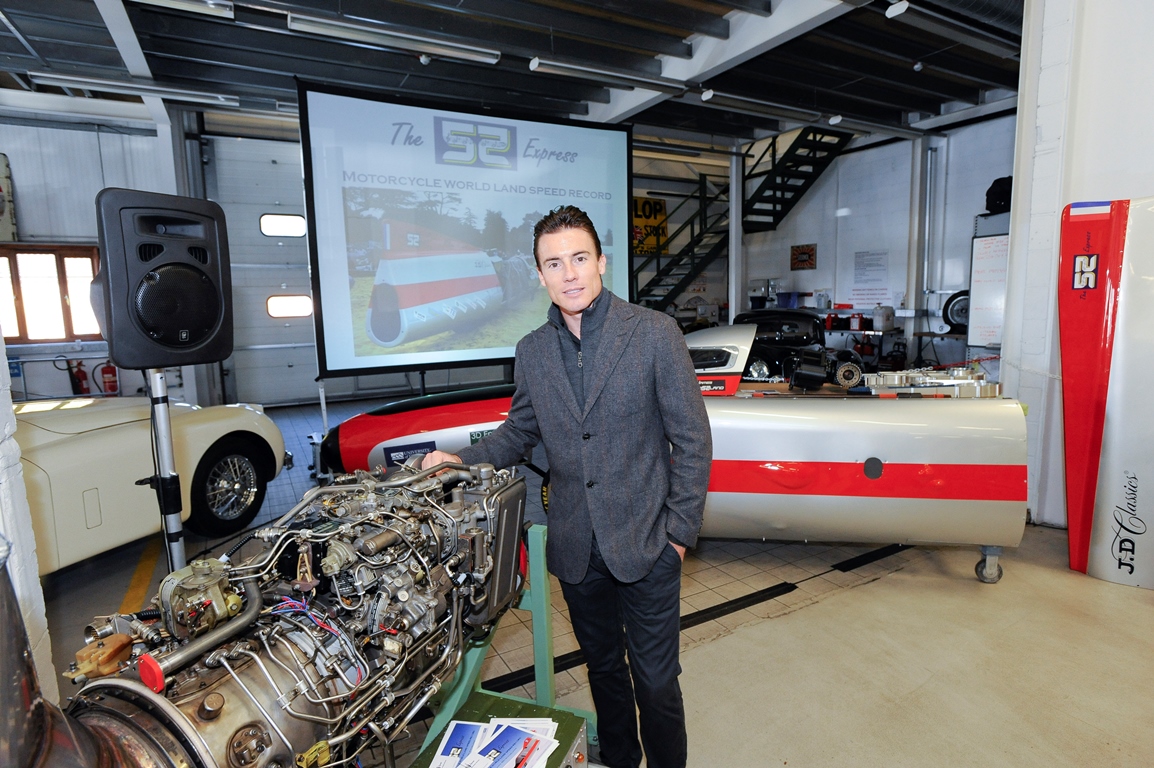 James Toseland with the engine of the 52 Express Motorcycle which he hopes to power him to a new World Land Speed Record in 2014.

Having discussed and compared both men’s vastly different yet successful motorcycle careers, the conversation turned to the World Land Speed Record attempt which James Toseland would undertake in September 2014 at Utah’s Bonneville Salt Flats. Aiming to break the current World Record of 376.363 miles per hour held by American Rocky Robinson, James is set to take to the ’52 Express’ Streamliner in a bid to exceed the current record. The specially designed motorcycle is currently under the build watch of ex GP and TT sidecar racer Alex Macfadzean who, as a former holder of the British Land Speed Record is well equipped to assist James Toseland in his bid to reach a top speed of over 400mph. With the motorcycle’s build being undertaken by project manager Robin Richardson and his University of Derby based team, JD Classics’ team of body shop specialists were commissioned to paint and streamline the motorcycle’s body and appeared on show at this year’s Goodwood Festival of Speed. Parts of the body were on display throughout the breakfast morning for visitors to have a closer look at. 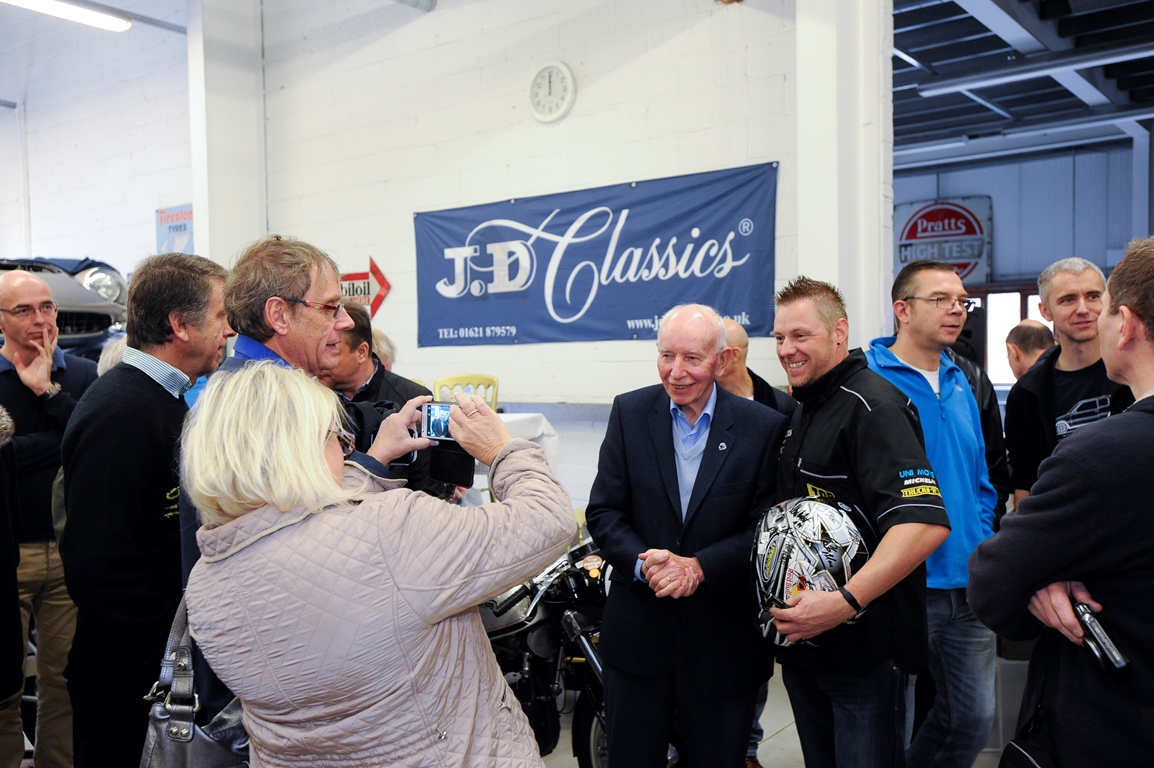 Both guests of honour took the time to sign autographs and chat with visitors.

Having entertained a captivated audience and answered questions from the floor for an hour and a half, the morning’s talk came to a close with a rapturous applause from the audience. With both John and James taking the time to chat with visitors and sign autographs before their departure, another and perhaps our most popular breakfast morning to date came to a close, signalling a fantastic end to the ever popular series of JD Classics breakfast morning’s in 2013.