With 550 exhibitors occupying 65,000 square feet and displaying more than 500 individual cars within the largest hall at the Porte de Versailles Exhibition Centre, Paris, Retromobile 2017 once again proved to be one of the most prestigious events in the classic car calendar.

We attended for our fourth consecutive year and over the 5 days from 8th to 12th February showcased 12 exceptional motor cars from our current stock including some of the most iconic and historically significant examples of the world’s premier classic car marques including Ferrari, Aston Martin, Jaguar, Ford and Alfa Romeo.

The range of cars on display was representative not only of the pedigree that all of our cars share but also the breadth of choice we now offer our customers with examples covering the pre- and post-war periods and including outright racers, sports cars and grand tourers from multiple marques. 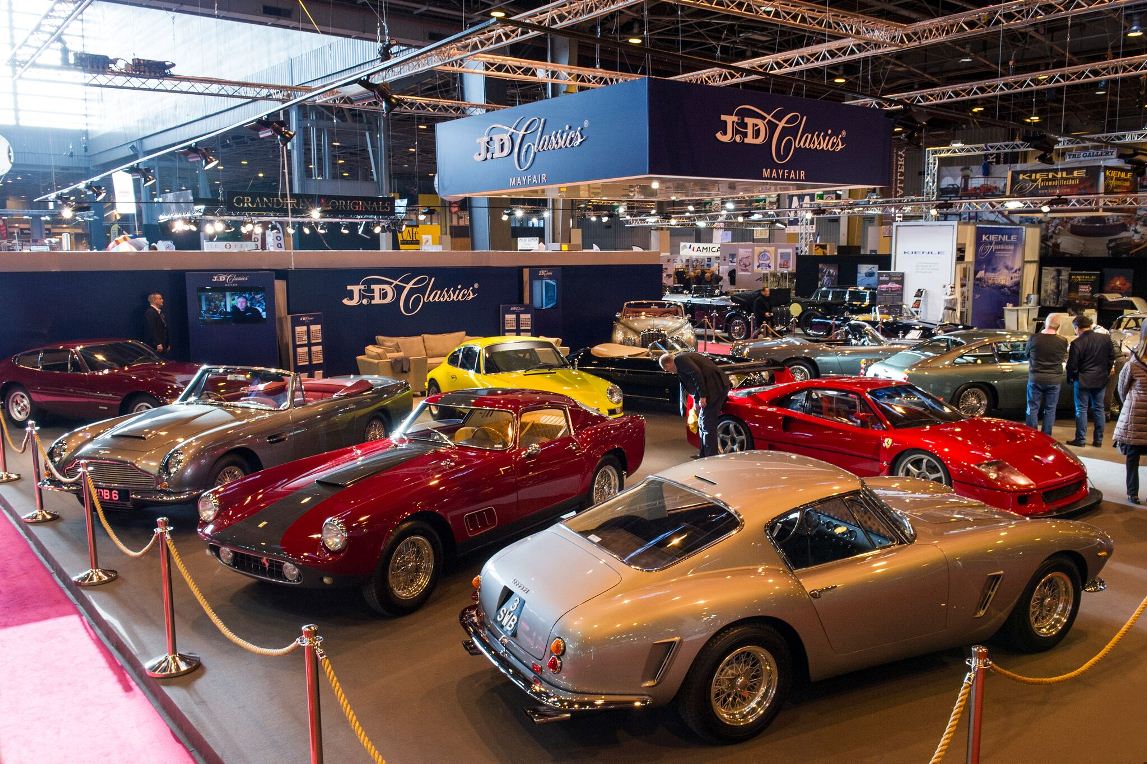 JD Classics displayed 11 of their finest classic car examples at this years Retromobile held in Paris.

Among such distinguished company it is hard to elevate any one car above its peers but the Alfa 8C Monza was surely one of the show’s highlights. With less than 190 8C 2300s built from 1931-1932 and only 10 ‘Monza’ works cars, this example is one of a small number of very rare customer cars, which was originally constructed for Swedish privateer racer Per Wiktor Widengren, who achieved many successes over the 1932-36 period on both paved circuits and ice tracks. Such is the rarity and desirability of these cars that this example was displayed for exhibition purposes only.

Another exceptional competition car from the JD Classics stable was the Series II 1953 Ferrari 250 MM Vignale Spyder, which is one of just 12 Spyders and was driven in period by none-other-than Mike Hawthorn in the 1953 Mille Miglia. With further races both in the UK and on the continent it boasts a particularly compelling competition history and it is not surprising that this delightful car found a new home during the show.

Also finding buyers at Paris were the left hand drive 1974 Jaguar E-Type Series 3 V12 roadster, which was extensively restored and upgraded by JD Classics a few years ago, and the stunning 1963 Ferrari 250 GT Lusso, one of 328 built in left hand drive and delivered new to the United States. This Ferrari was acquired by JD Classics in 2014 and has benefitted from a full JD restoration including bare metal re-spray, full re-trim, re-chrome and complete JD overhaul of its engine, gearbox, back axle and suspension.

Sold new to Bob Truett in 1937, the Jaguar SS100 we displayed is arguably one of the most important competition Jaguars in existence with numerous appearances at Brooklands, Donington Park and Crystal Palace as well as on the RAC Rally. With numerous factory upgrades including works engine with competition cylinder head and Scintilla magneto as well as an extensively drilled chassis, to reduce weight, this remarkable car was immensely successful in period and has recently been restored to concours winning standard.

Another contender for best-in-show, and another car displayed for exhibition only, must have been the beautiful 1966 Ford GT40 Mark III, which is 1 of only 7 Mark III GT40s built and the original experimental car. This example was also the 1966 New York Show car, after which it was sold to the Gulf Oil family, who used the car so sparingly that upon its rediscovery in America it was found to be in remarkably original condition and to have covered just 14,000 miles from new. In 2016 the car received a total JD Classis restoration to concours standard and subsequently achieved in a 3rd in Class win at Pebble Beach in 2016.

Among our display this year were two very special Aston Martins: the unique ‘deluxe’ roadster variant of the 1954 Arnolt Aston Martin DB2/4 Bertone Spyder and a stunning DB4 rebuilt to exacting GT specification. Both cars were incredibly popular with the crowds, with the striking looks of the Bertone Spyder being particularly commented upon.

In addition to the aforementioned SS100, we also displayed three other very important competition Jaguars on our stand. Recently restored by ourselves, the ex-Mike Salmon XK120 looked stunning in its original Lavender Grey. This is the car that started Mike on his lengthy and distinguished competition career and in which he scored many early wins. Another car that has been developed by the JD Classics team is the semi-lightweight E-Type that has been successfully campaigned by ourselves over recent years, most notably with two back-to-back wins in the Goodwood RAC Tourist Trophy Celebration. It was accompanied in Paris by another significant racing car and the most modern car on our display; the Jaguar XJR-15, which is 1 of the 16 examples to actually compete in the Intercontinental Challenge race series. Driven by Andy Evans, it completed all 3 races and was the only car to do so without an accident. It has just benefited from a complete no-expense-spared professional restoration undertaken by one of the foremost race preparation companies in the UK.

With a delightful XK140 roadster, finished to MC specification with factory fitted C-Type head and very rare 2 inch Sandcast carburetors, rounding out the display it was no surprise that once again JD Classics received widespread accolades for the variety and quality of cars on display.

Commenting on the weekend, JD Classics Managing Director Derek Hood: “The whole team worked very hard both in Maldon preparing the cars and members of staff on the stand. Days were long but the team kept smiling – it was great to catch up with old customers and very pleased to meet potential new customers”.