A variety of historic saloon, single seaters and Formula One cars gathered at Brands Hatch this weekend for the annual Masters Historic Festival. Just returned from having campaigned a total of ten cars in the Mille Miglia the week prior, JD Classics ran their distinctive Costin Lister with Chris Ward behind the wheel for the weekend. Having also taken part in the Mille Miglia the weekend previous in their Jaguar XK140, father son racing duo of Steve and Josh Ward competed their Ecurie Ecosse XK120 within the Woodcote Trophy race for the bank holiday’s racing action.

A sudden heavy downpour on Saturday morning meant conditions were hampered for the weekend’s first few qualifying sessions, however by the time the Stirling Moss Trophy qualifying session started late morning the sun had come out and had dried out the track ahead of the 30 minute session. Continuing its dominance from Donington Historic Festival in April, Chris Ward and the Costin Lister took to the 2.4 mile long circuit and within just five laps produced a blistering lap time of 1:43.065 before returning to the pits. With the remainder of the Stirling Moss field completing in excess of 11 laps, the JD Classics Lister maintained an unrivalled pole position qualifying over two seconds faster than the second placed Lotus 15 of Michael Gans.

The RAC Woodcote Trophy field qualified on Saturday afternoon with Steve Ward taking the first stint of the 30 minute session. Continuing to better his lap time and after six flying laps, the remainder of the session was handed to Josh Ward who maintained the momentum to qualify the XK120 in 22nd place.

The Costin Lister of Chris Ward qualified pole ahead of the weekend's Stirling Moss Trophy race.

The JD Classics Costin Lister led the grid through for a rolling start as the 60 minute Stirling Moss Trophy race got underway. True to form, the JD Lister got off to a strong start and dominated the first few laps before the deployment of the safety car on Lap 6 bunching the field back together. After one lap, the safety car came into the pits and the race continued albeit short lived as another incident brought the safety car out again one lap later. By Lap 11 and with the safety car now back in the pits, the race resumed as the JD Classics Lister continued to lead the field hotly pursued by the persistant Lotus 15 of Michael Gans. With the pit window now open, the Lister came in for its mandatory pit stop. Remaining stationary for 60 seconds, the JD engineers checked over the car before exiting the pits and re-joining the race in 4th.

As the race entered its latter stages, the Lister had worked its way back up to the front of the field and despite the mounting pressure from the pursuing Lotus gradually increased the gap to take the chequered flag with an impressive 13 second lead.

Steve Ward was first up in the driver’s seat of the Ecurie Ecosse XK120 for the 60 minute RAC Woodcote Trophy as the race got off to a rolling start. A busy weekend for the safety car, another two on-track incidents saw it being deployed twice within the first ten laps of the race. Nevertheless, Steve Ward continued to maintain consistent lap times producing a fastest lap time of 2:10.4 before coming into the pits and handing the remainder of the drive over to Josh Ward. Producing an impressive fastest time of 1:59.8, the XK120 was also driven to a second in class position within the Woodcote Trophy; the second consecutive class position for the distinctive Ecurie Ecosse XK120 of Steve and Josh Ward. 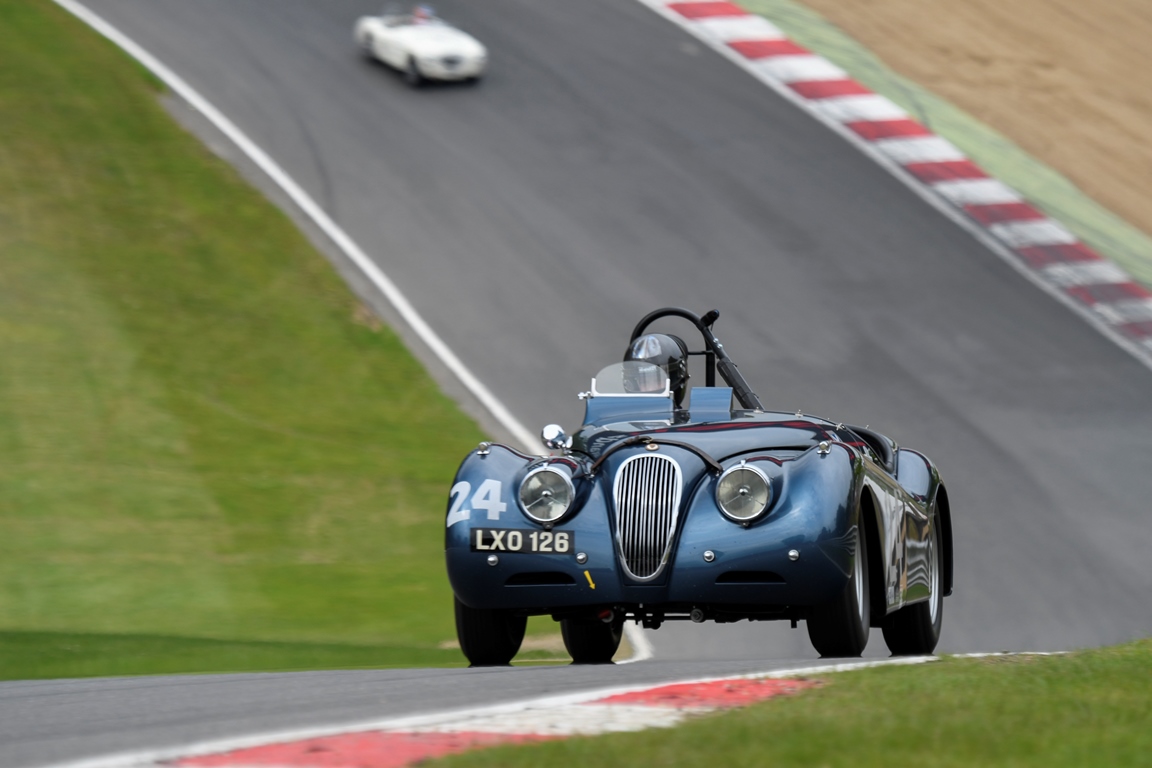 The Ecurie Ecosse Jaguar XK120 of Steve and Josh Ward acheived a well deserved second in class within the Woodcote Trophy.

Speaking of the weekend’s result, Chris Ward said; “It is fantastic to be back on Brands Hatch’s Grand Prix circuit as there are very few opportunities to race on one of the best circuits in the country. Qualifying offered ideal conditions allowing me to use the first few laps to re-familiarise myself with the circuit before putting in three flying laps to claim pole position. Despite leading the race from start to finish, the Lotus 15 of Michael Gans drove exceptionally well pushing me harder than I expected to be pushed. The safety car interrupted the race but made for good viewing for spectators as it kept the field close. I am already looking forward to coming back to Brands for next year’s Masters Historic Festival”.