JD Classics were excited once again to be participating in the 2017 running of Bernina Gran Turismo having sponsored the event for the past two years.  Inaugurated in 1929, the first BGT was won by racing driver Hans Stuck, however the event only ran in period for two years before it was deemed too dangerous. Revived in 2015 by local classic car enthusiasts, the hill climb this year would see 60 sports and racing cars built up until the 1980s take on the challenging 5.6 kilometre run up the Bernina Pass, starting from La Rosa, crossing the finish line at the highest point of the pass, Bernina Hospiz. 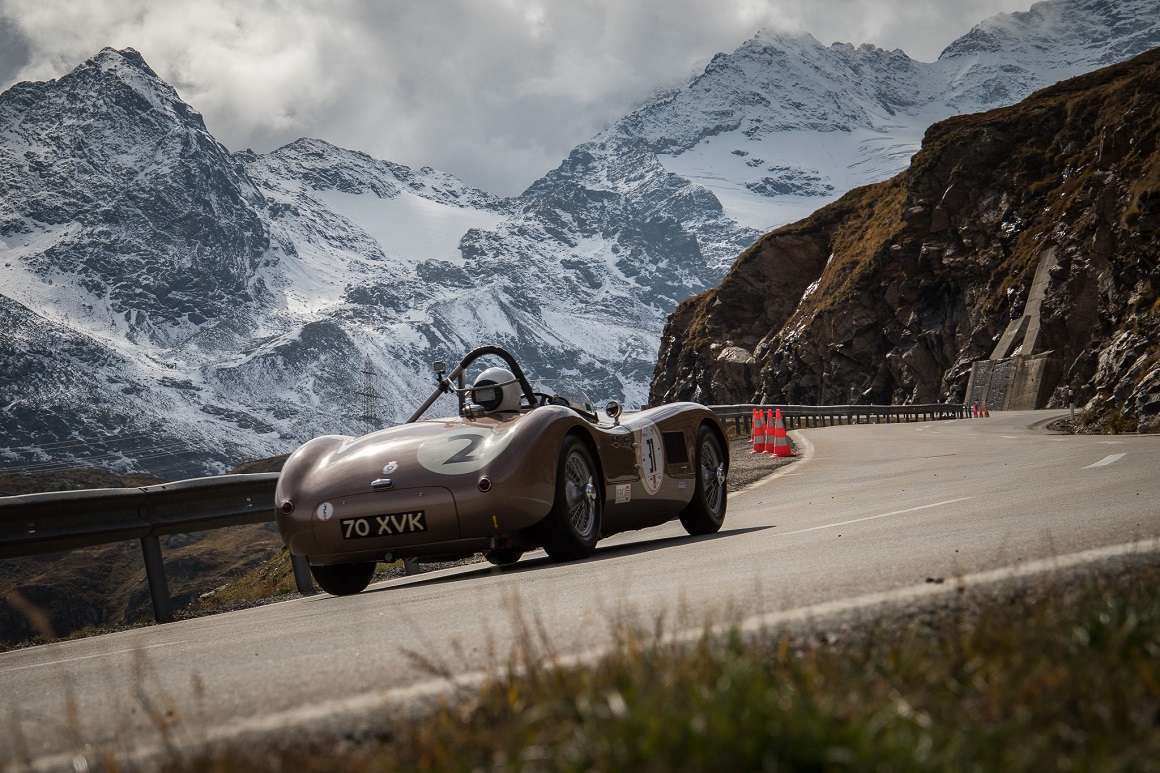 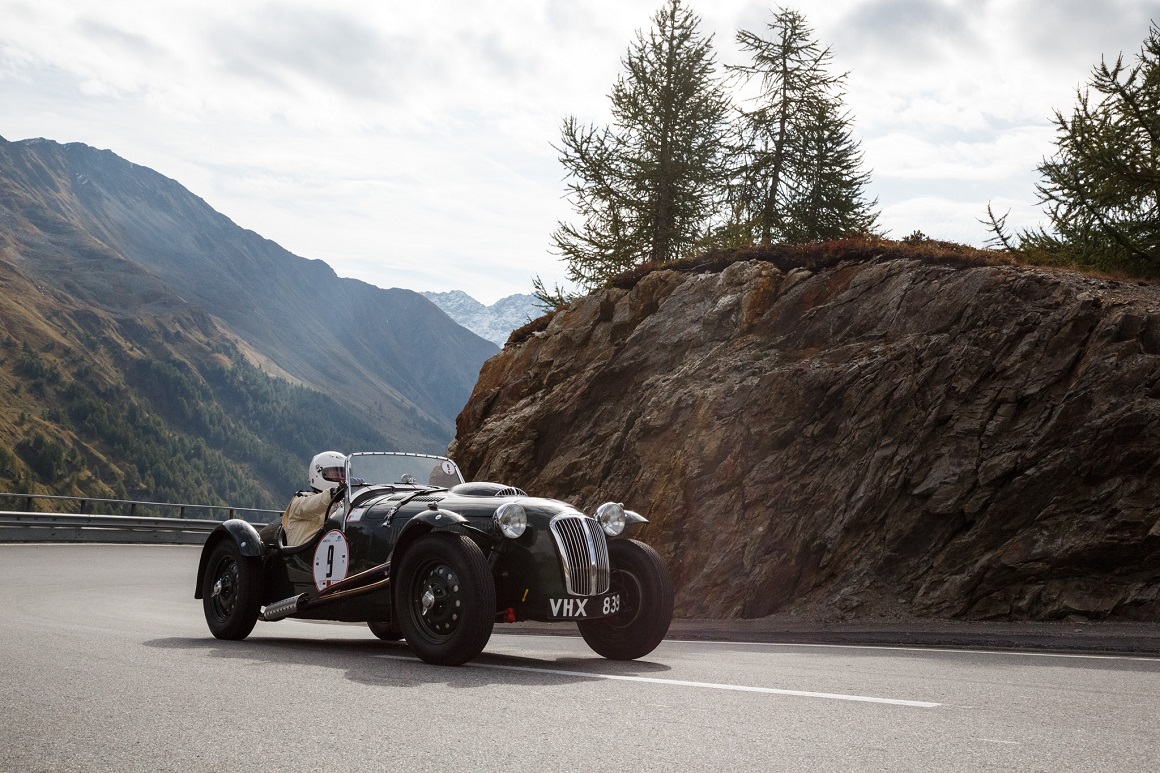 With scrutineering and signing on completed on Friday, Saturday morning’s first of two practice runs took place in warm and sunny conditions as the field took advantage of the morning’s two free runs allowing both driver and car to familiarise themselves with the challenging mountainous roads. Having completed both practice runs without fault, the JD Classics cars returned to base camp and the JD engineers checked over all six cars in preparation for Saturday afternoon’s official timed runs. 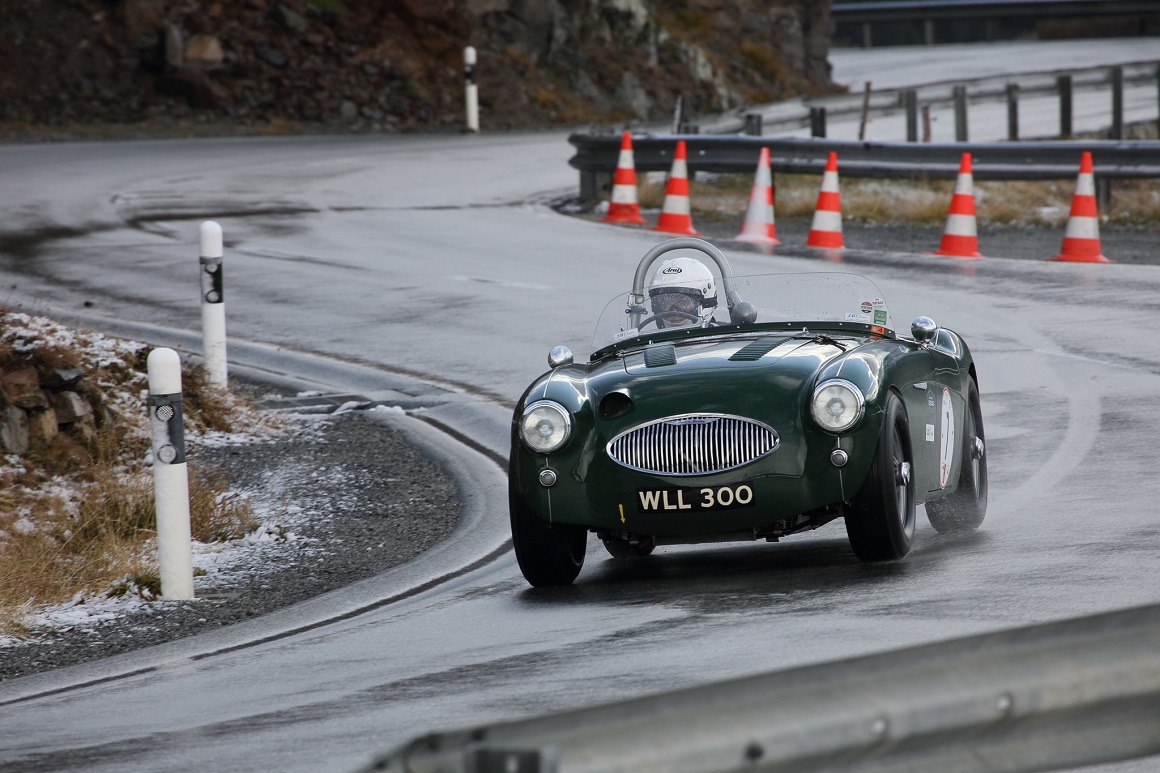 Saturday afternoon continued to remain dry as the cars lined up ahead of the weekend’s first competitive timed runs. With the GT40 of Chris Ward, Austin Healey of Derek Hood and Frazer Nash of Steve Ward all running in the competition field, the first run saw Chris Ward achieve a run of 3:20.3. The time instantly placed the JD Classics GT40 at the top of the field, Chris continued to maintain momentum improving his second run with a time of 3:18.8. Derek Hood and Steve Ward also improved on their second runs with the Austin Healey of Derek Hood shaving almost 4 seconds off his first official competitive run up the hill. 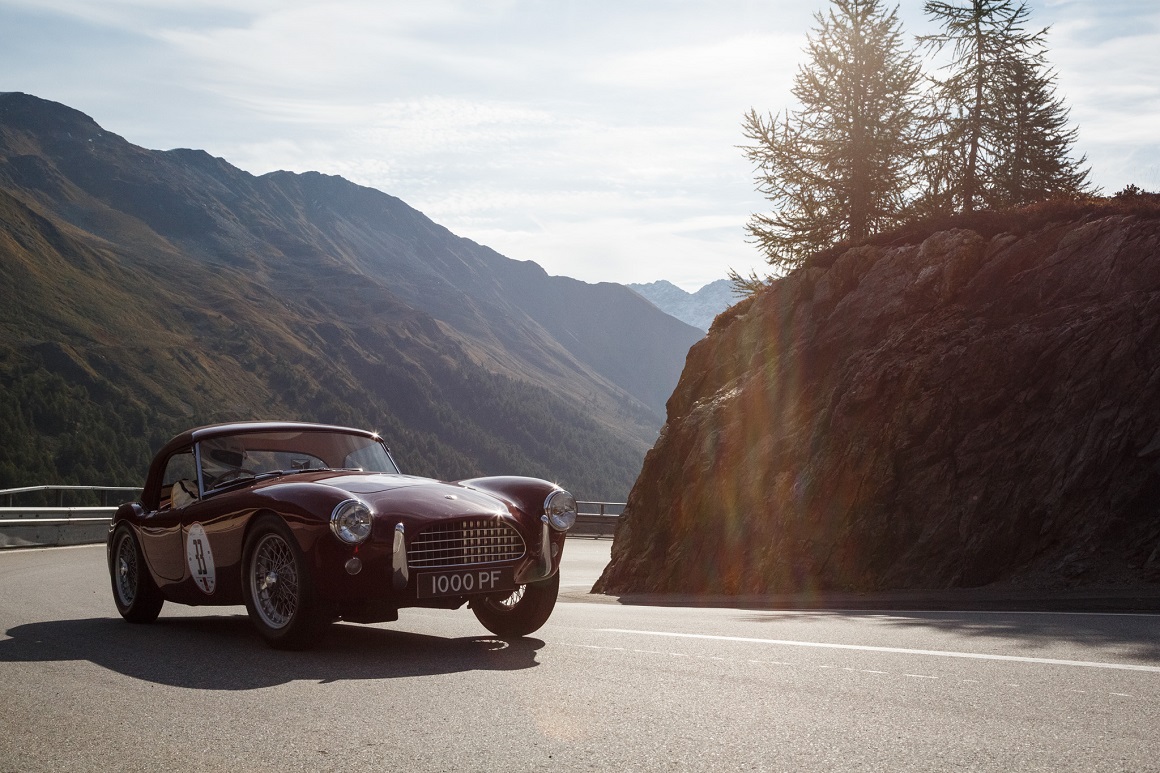 Thomas Ward acheived a class win within the regularity field in the 1963 AC Ace.

Competitors participating in the regularity group were required to achieve a time as close to 4:25.0 as possible and with the MKII of Steve Riedling, C-Type of Phil Mouser and AC Ace of Thomas Ward all competing within the regularity field, competition was fierce amongst the sizeable 40 car group. As per the competition field, all three JD cars ran well to significantly improve on their first timed runs with Steve Riedling driving the MKII producing a close 4:24.02 as Saturday’s runs came to an end. 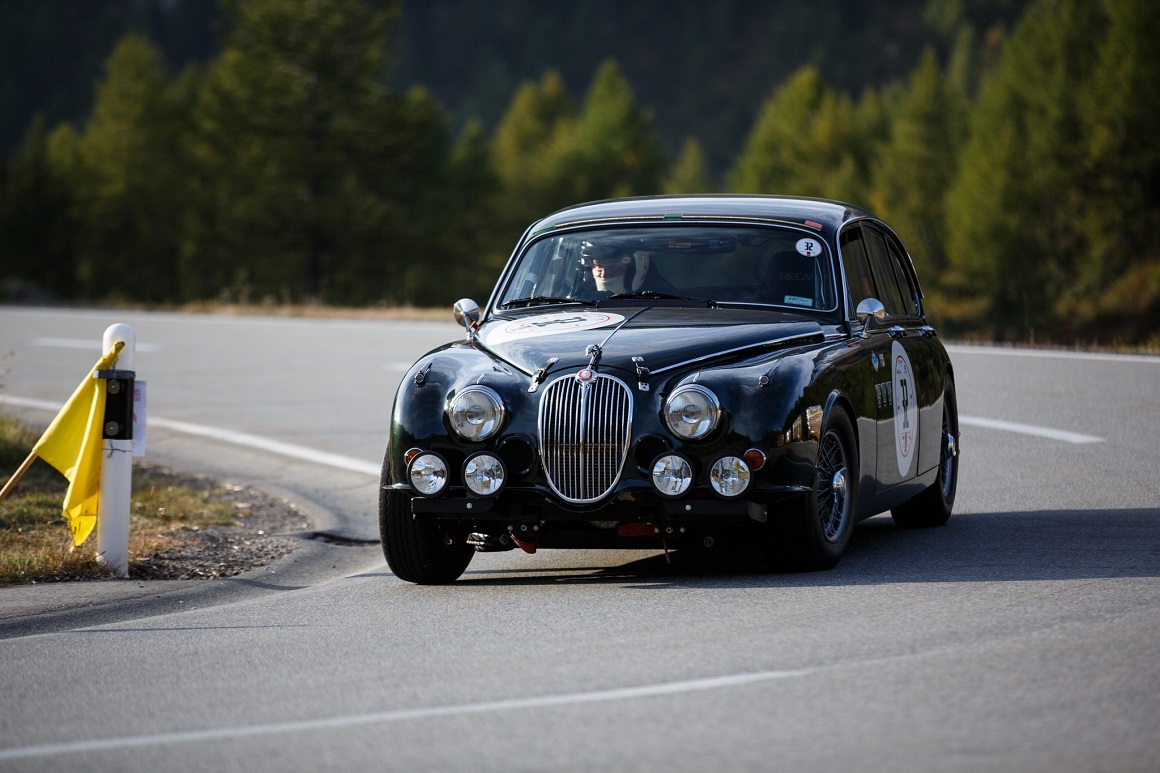 The Jaguar MKII of Steve Riedling ran well to be awarded a class win at this year's Bernina Gran Turismo.

A contrast to the previous day, Sunday’s competition began under wet and cold conditions with the occasional snow shower making an appearance thus making conditions much trickier. Due to the decline in weather, the first official run of the day was changed to free practice, to allow drivers to familiarise themselves with the Challenges of the hill climb in the now inclement weather conditions. With the poor weather continuing to persist for the remainder of Sunday, the final timed run was significantly slower compared to the day previous. Despite Sunday’s treacherous weather hampering performance, the GT40 of Chris Ward maintained the best-timed run from Saturday to take the title within the Competition field completing a hat trick of GT40 victories in as many weekends for Chris Ward and JD Classics at both Goodwood Revival and Spa Six Hours. Individual class wins were also awarded to the Jaguar MKII of Steve Riedling, AC Ace of Thomas Ward and Jaguar C-Type of Phil Mouser with JD Classics achieving a total of three class wins and overall victory in this year’s Bernina Gran Turismo. 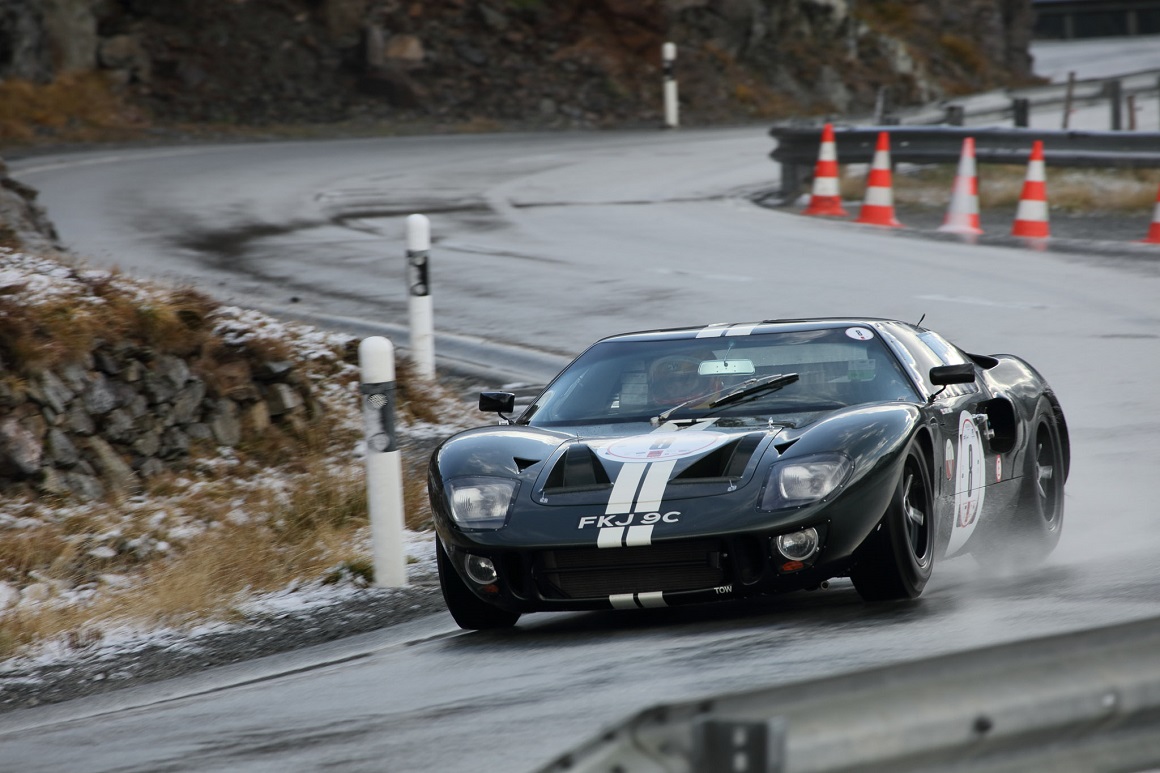 Fresh from its victory at Goodwood Revival, the GT40 of Chris Ward acheived a flying course time of 3:18.8 to take an overall victory for JD Classics at this year's Bernina Gran Turismo.