Having celebrated the Spa Six Hours victory at their last competitive outing in September, JD Classics headed for sunnier climes for the season closer at this year’s Algarve Classic Festival.

Campaigning three cars throughout the weekend, it was the familiar sight of the Bastos Rover first to qualify on Friday afternoon driven by Steve Soper and Chris Ward. A 40-minute session, the combined Historic Touring Car Challenge and Tony Dron Trophy grid exited the pits as ex touring car driver Steve Soper took to the wheel for the first stint of qualifying. Producing an initial flying lap of 2:08.0, the Bastos Rover continued its charge with Steve Soper knocking off another two seconds in as many laps. After 5 laps and running in 2nd place, the drive was handed over to JD Classics’ resident racing driver Chris Ward who, with just over 25 minutes left re-joined the session in a bid to close in on the coveted pole position. Returning to the track in 2nd place, the BMW CSL of Eric Mestdagh and Pierre-Alain Thibaut continued to hold the fastest lap having achieved a 2:04.4 early on in the session. Despite achieving an impressive 2:05.4, the BMW maintained pole with the Bastos Rover lining up alongside in 2nd place ahead of Saturday morning’s race. 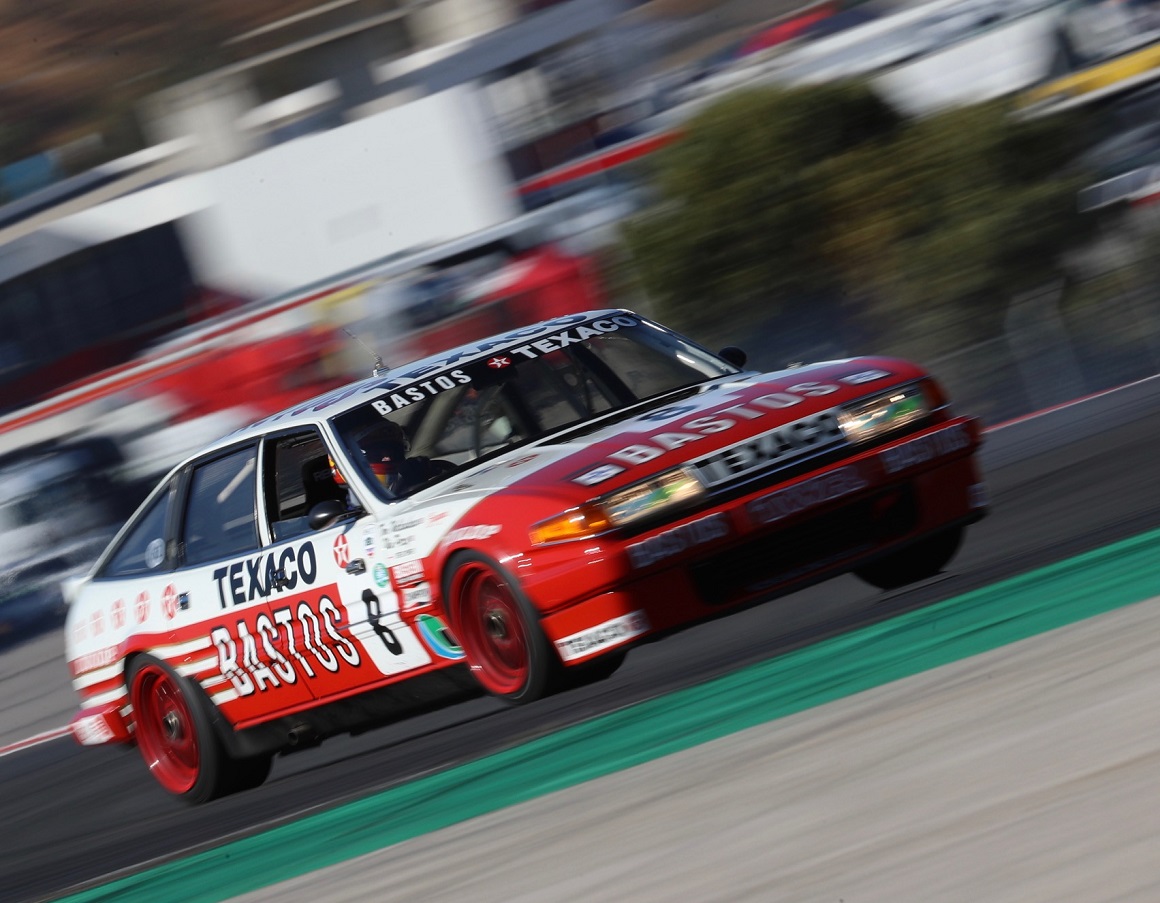 First to qualify for the weekend's racing was the Bastos Rover of Steve Soper and Chris Ward lining up on the grid in 2nd place.

The Costin Lister of Chris Ward and John Young and the Ecurie Ecosse Jaguar XK120 of Steve and Josh Ward completed the weekend’s line up for JD Classics with both cars competing in the combined Motor Racing Legend’s 50s Sports Cars race. As the vast grid of 1950s sports cars filtered out for the 40-minute session, John Young and Steve Ward captained their respective cars for the first stint and with both running well early on, by Lap 3 the Lister was running in 3rd and the XK120 in 14th place.

A puncture on Lap 6 prematurely ended the qualifying session for the Ecosse XK120, qualifying the car in 27th place. Another two laps and the Costin Lister came in for a quick driver changeover with Chris Ward re-joining in 8th place, however his first flying lap managed to storm the car up into 3rd and was hot on the heels of the 2nd placed Tojeiro of James Cottingham and Max Girardo.

Responding to the pace set by the two front running cars, Chris Ward set his fastest lap of the session with a 2:09.9 as the Costin crept up on the 2nd placed Tojeiro. Entering its final few minutes, Chris Ward made a late surge and with an impressive lap time of 2:09.1 positioned the JD Lister on pole for Saturday’s two hour race with Greg Caton’s Lotus 15 and the Tojeiro of James Cottingham and Max Girado completing the front of the grid for the combined MRL Sports Car race. 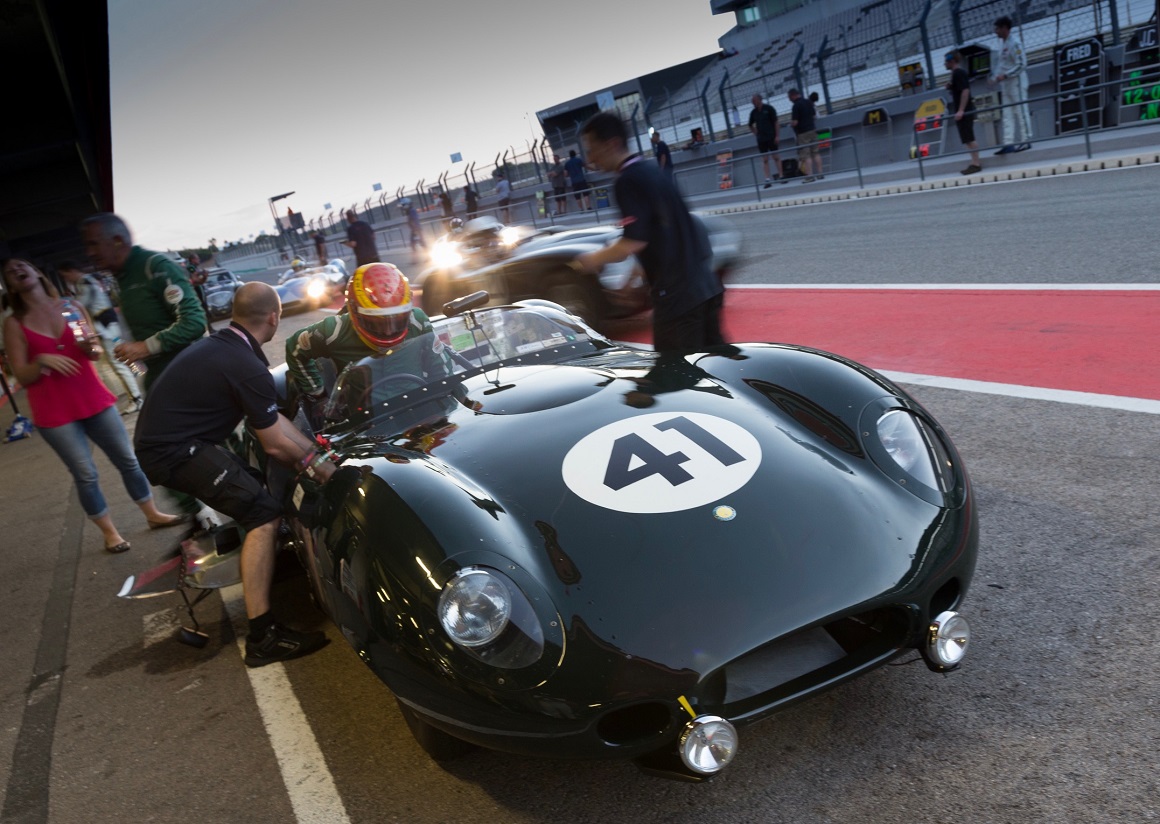 A rolling start saw Saturday morning’s 2 hour combined Historic Touring Car Challenge and Tony Dron Trophy race get off to a powerful start for the JD Classics Bastos Rover, with Chris Ward making good his second place storming into the lead by the end of the first lap, with a lead of over 4 seconds already.

Increasing the pace, the former pole sitting BMW of Eric Mestdagh and Pierre-Alain Thibaut started to close the gap between itself and Chris Ward, however a quick response from the JD Bastos Rover soon saw it begin to pull away once more and develop an 8.6 second lead by Lap 12. With regulations stating that no driver can drive more than 55 minutes in one stint, the team took the decision to bring in Chris Ward after 40 minutes. Handing over to Steve Soper as the team refuelled the car for his 50-minute stint, the Bastos Rover re-joined the field in 5th place with the previously ailing BMW of Mestdagh and Thibaut now in the lead. Despite initially matching the pace of the lead car, the Bastos Rover was soon plagued with brake deterioration thus slowing the car’s lap times and allowing the BMW to gradually pull away from the field. 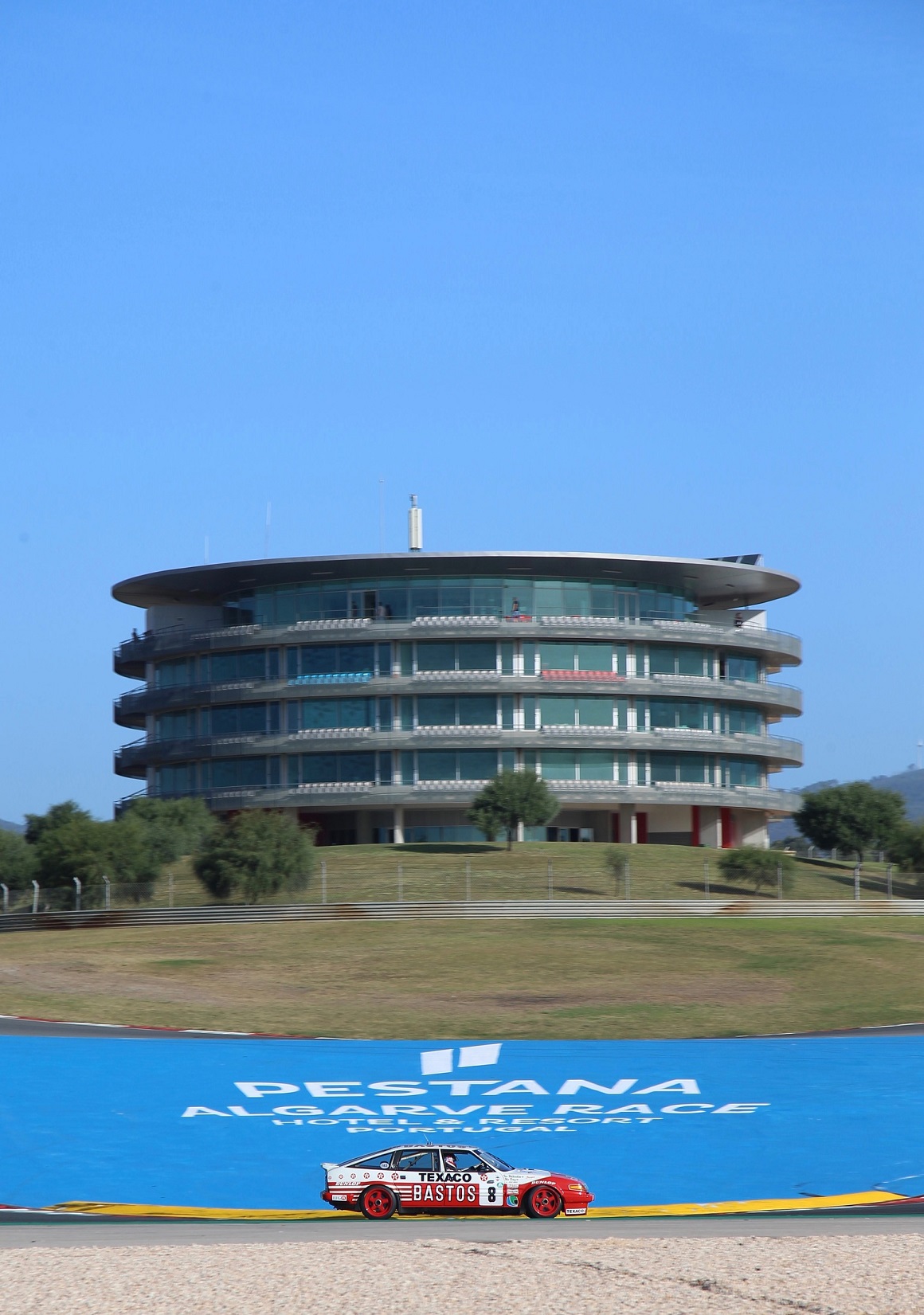 On Lap 42 and with just under 30 minutes of the race remaining, the Rover was called in for the final refuelling stop. A quicker stop than before saw Chris Ward back in the driver’s seat for the final leg of the race as he re-joined 25 seconds behind the leading BMW.

Now in its latter stages, Chris Ward continued to push the attack despite its technical gremlin to produce consistent fastest sectors throughout Lap 50, however a last minute drive through penalty hampered the Bastos Rover’s chase eventually taking the chequered flag in 2nd place behind the Mestdagh-Thibaut BMW CSL 3.0.

The final race of the day, the 27-car field lined up for Saturday evening’s MRL 50s Sports Car race. A two-hour race, no driver was allowed to complete more than 55 minutes at any one time meaning all cars needed to make not one but two pit stops throughout the race. Lining up on the front row with the Lotus 15 of Greg Caton, the JD Classics Costin Lister led the grid through a rolling start as the race got underway. An early exit from the race for the second placed Lotus saw the Tojeiro promoted to 2nd place and in hot pursuit of Chris Ward, however the Lister continued to fend off its advances to increase his lead to over 7 seconds by Lap 7. A strong start from Steve Ward’s Ecurie Ecosse XK120 saw the Jaguar running in 21st by the end of Lap 3 having qualified in 27th the day previous. 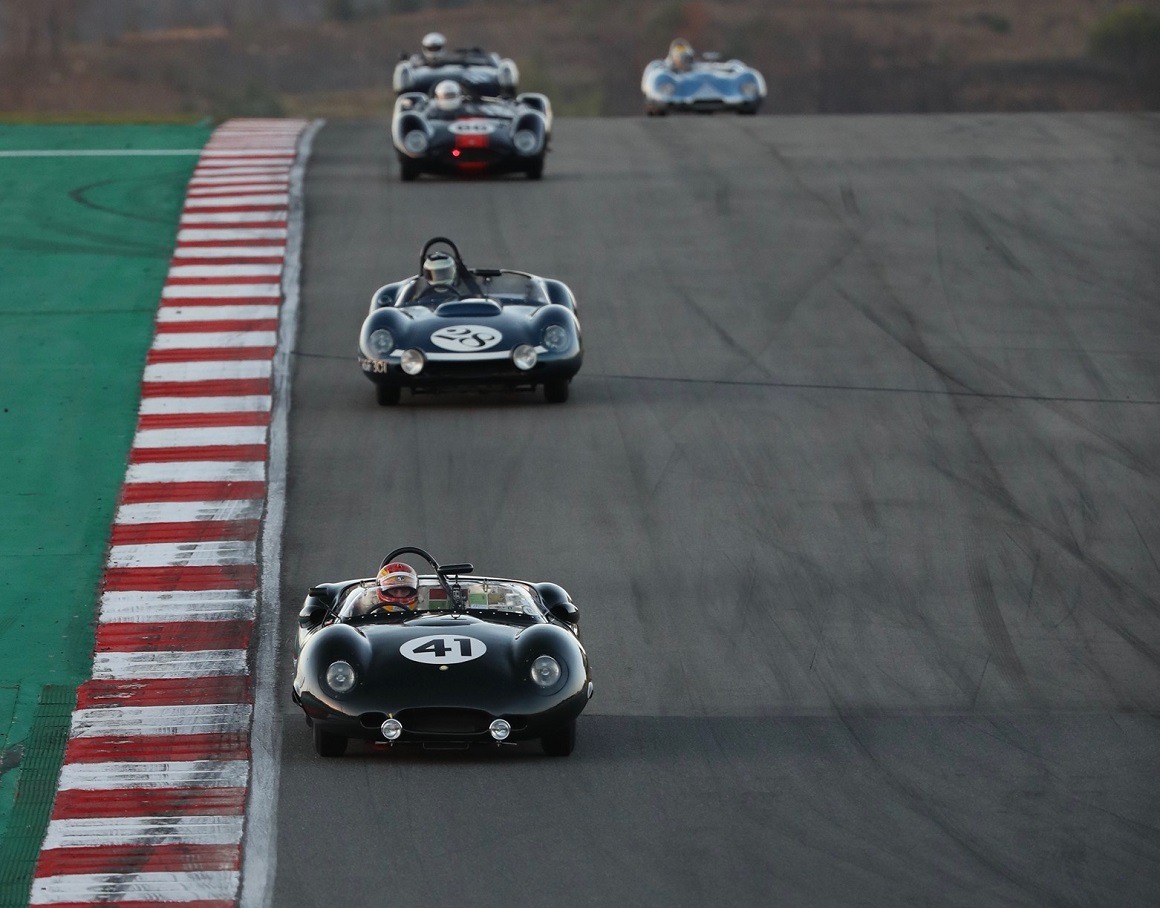 On lap 12 and running with a strong 16 second lead, the Costin Lister was called into the pits for the first of its two pitstops. Having completed a stationary 60 second stop, a prerequisite for any race within the Motor Racing Legend’s series, and now with John Young behind the wheel, the Costin Lister returned to the race in 5th position. A lap later and it was the turn of the Ecosse car to make its first stop as Steve Ward passed the drive over to Josh Ward. Re-joining in 19th place, a fastest lap of 2:32.4 and another two laps saw the XK120 gain another two positions and running in 17th. 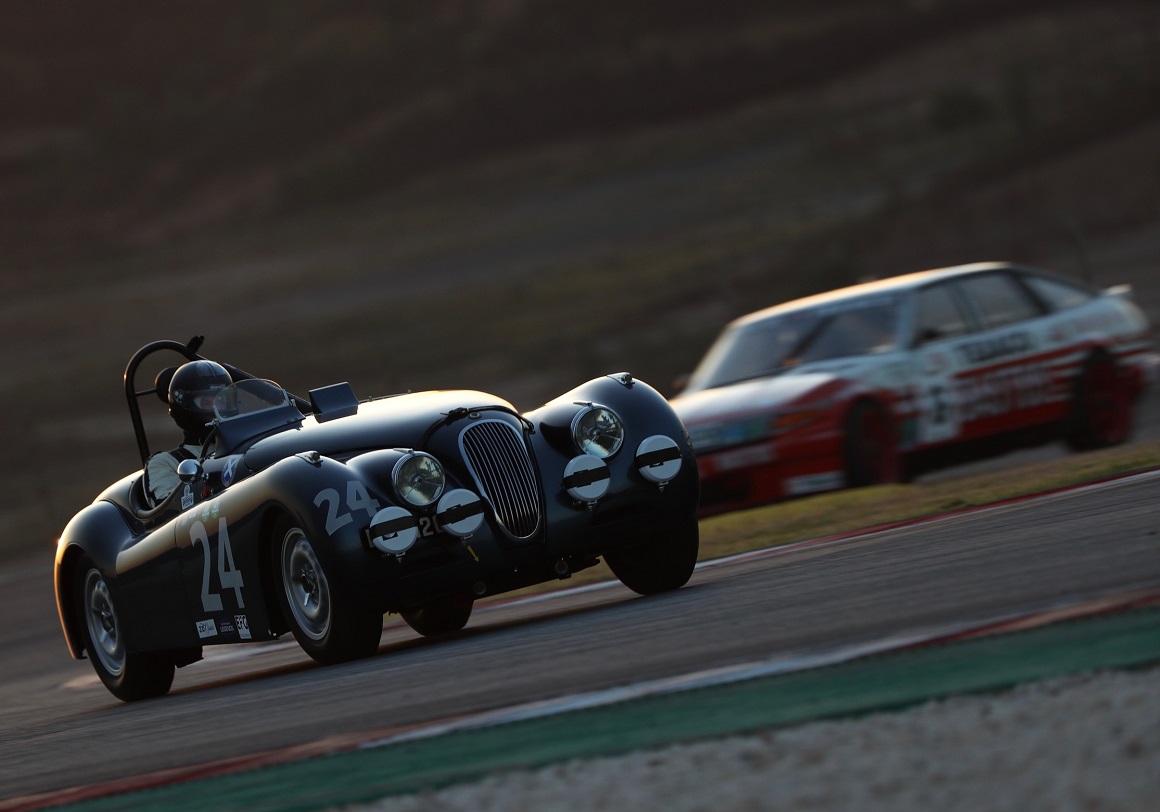 Despite suffering with a puncture during qualifying which started them from the back of the grid, the Ecurie Ecosse XK120 of Steve and Josh Ward charged the car through the field up into 17th place.

The tussle for position continued at the front of the field with the Cottingham-Smith Tojeiro heading the field a lap up on the second placed Willment Climax of Charles Gillett and Steve Smith. On Lap 30, the lead car came in for another pit stop with John Young and the JD Lister following suit the following lap. With Chris Ward driving the final stint of the race, the Costin exited the pits to return to the race in 5th place as the Cooper T38 of Fred Wakeman and Patrick Blakeney-Edwards had rocketed through the field and up into 2nd place subsequently pushing the front running cars down a place.

Having ran well throughout the first half of the race, Josh Ward’s XK120 suffered with a puncture; a problem which also plagued the car in Friday’s qualifying session forcing it to temporarily withdraw from the race after a promising start.

Two laps behind the safety car on lap 34 saw the field group back together thus losing the Tojeiro its one lap advantage and opening the competition for the lead back up to the field. Once the race got underway again the JD Classics Costin Lister was now running a lap time of 2:12.7 to the Tojeiro’s 2:13.9 and with a gap of only 20 seconds between the two cars the JD car was on the chase. 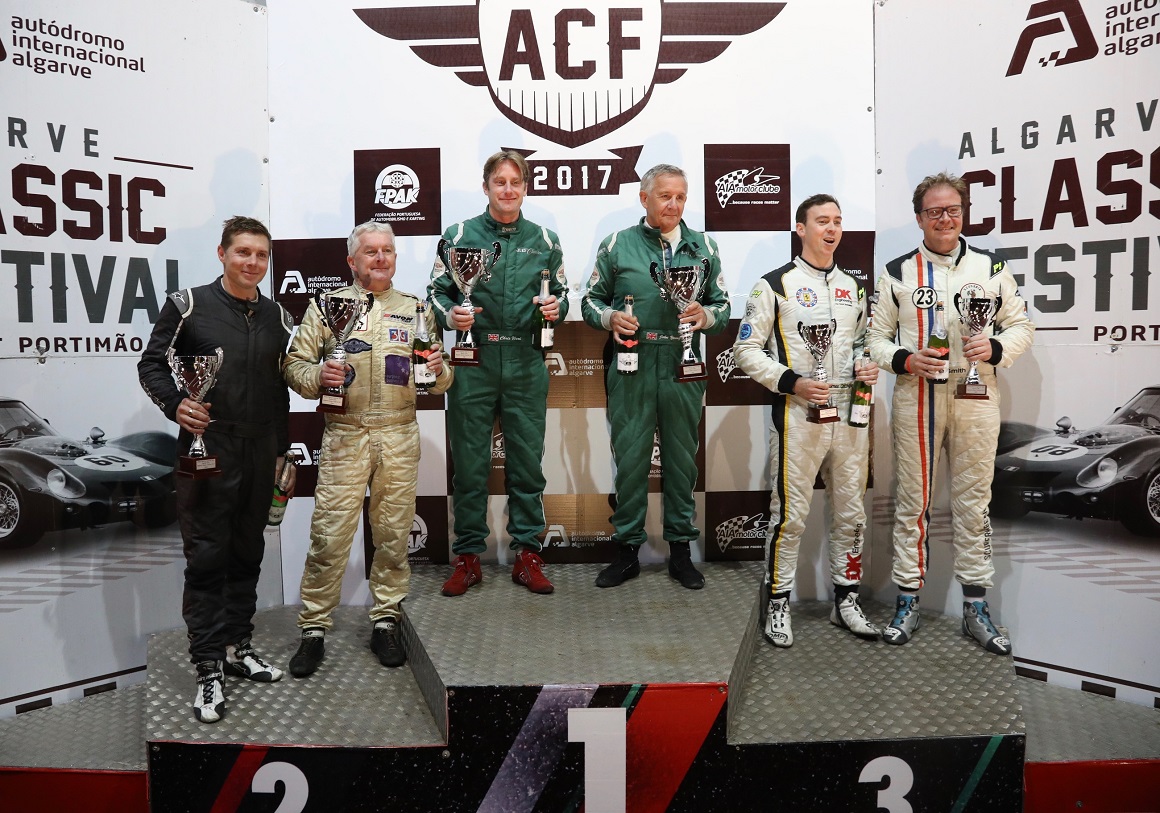 As the race entered its final 15 minutes, Chris Ward continued to close in on the leading car by nearly two seconds a lap and with just ten minutes remaining took the lead. A fixed tyre saw a late surge form the previously stranded Ecosse XK120 as Steve Ward returned to the driver’s seat to complete the race with a final few flying laps and as the chequered flag fell, the JD Classics Costin Lister came through to take victory not only in the race but to claim the Motor Racing Legend’s overall series title for the 2017 season.