With a variety of over 100 cars vying for the victory from Jaguar E-Types to powerful GT40s and Cobras, the Spa Six Hour race remains a coveted title to achieve for any team, car and driver. Fresh from a successful weekend at Goodwood Revival which saw JD Classics achieve two outright wins, the team now had their sights firmly fixed on the accolade of Spa Six Hour Endurance winners with their 1965 Ford GT40. 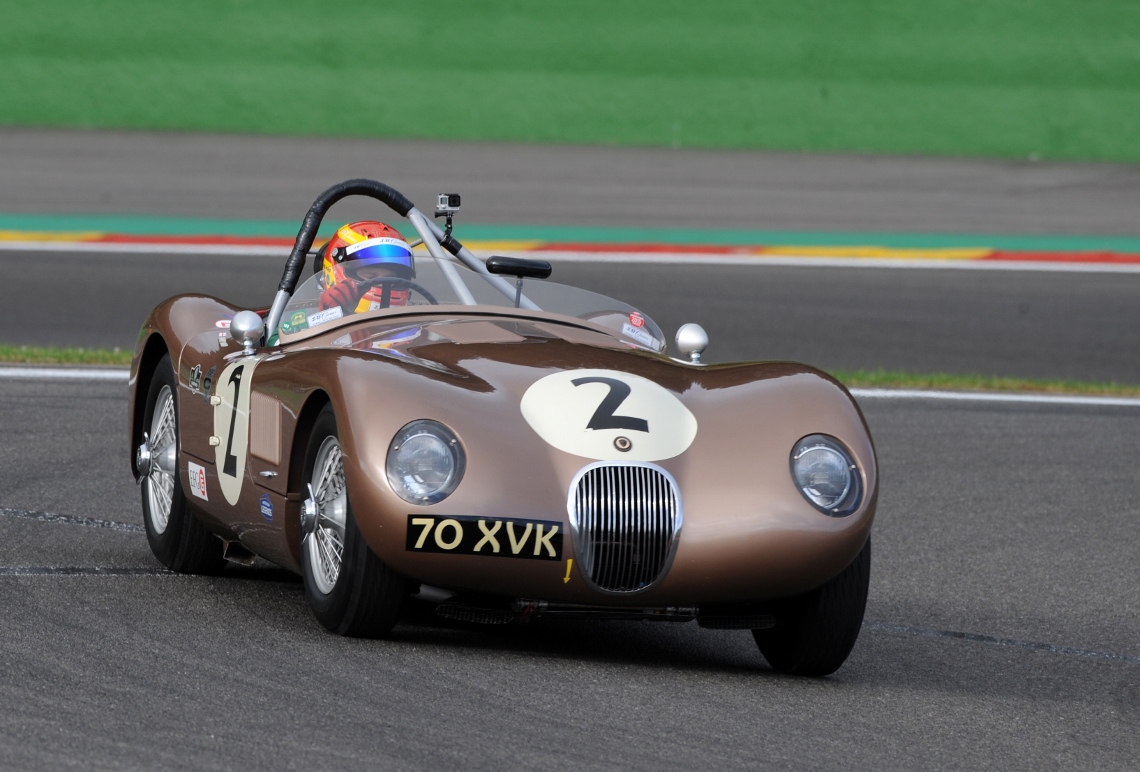 Thursday’s free practice sessions allowed both Chris Ward and Andrew Smith to familiarise themselves with the setup of the GT40 on the gruelling and notoriously demanding Francorchamps circuit. Chris Ward completed three laps before coming in and handing the car over to Andrew Smith for the following session thus allowing the team to make adjustments accordingly. 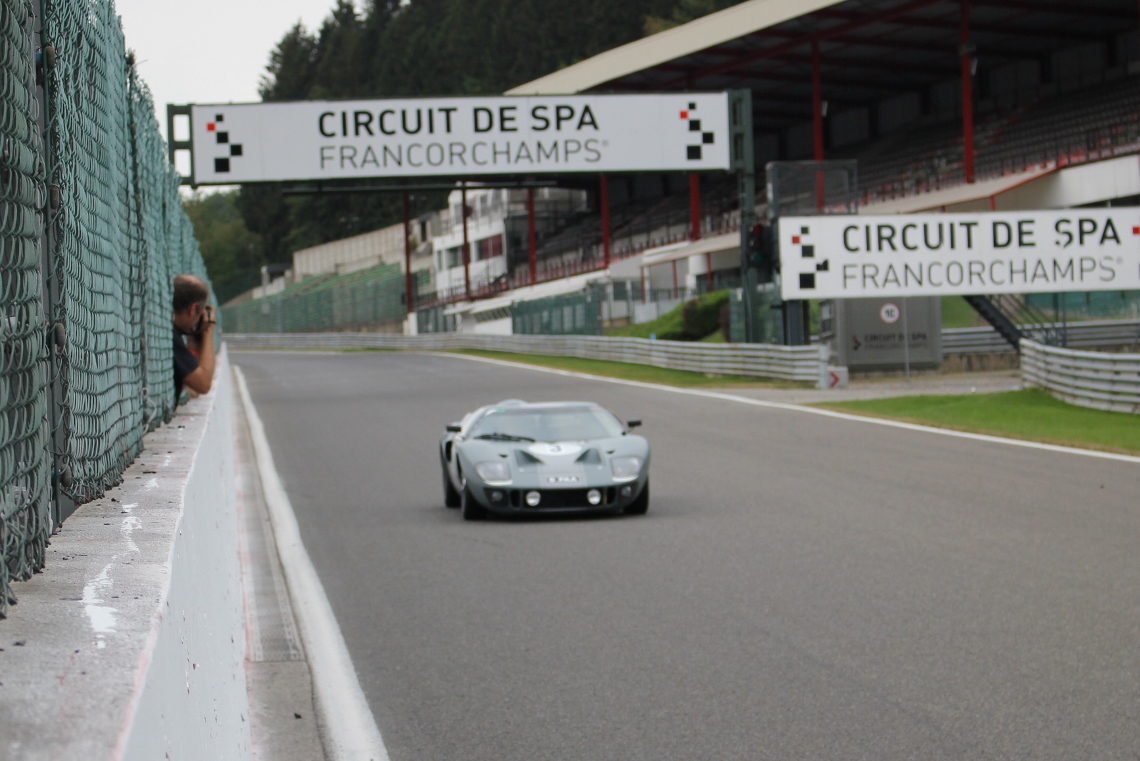 JD Classics will this weekend be competing their 1965 Ford GT40 in the famous Six Hours race at Spa Francorchamps.

The Jaguar C-Type of Chris Ward and XK120 of Steve and Josh Ward were the first of the JD trio to qualify in Friday morning’s 40 minute session. With a dry track ahead of them the combined Stirling Moss/Woodcote Trophy field exited the pits, however an oil spill on the out lap meant the session was red flagged and the field returned to the pits. With the oil cleared and the session now back underway, an incident between a Frazer-Nash and Jaguar C-Type saw the session very quickly red flagged once again. Returning to the pits for the second time in two laps and with the 40 minute session coming to its latter stages, both the C-Type and XK120 were going to have to put in competitive laps within a short amount of time. Steve Ward took the opportunity in the pits to hand the drive over to Josh Ward thus allowing both drivers to experience the driving conditions on their first competitive outing at Spa Francorchamps. With the field left with just enough time to produce no more than three of four laps, the C-Type of Chris Ward qualified in 1st place within the Woodcote Trophy and 9th overall within the combined 57 car field. The Ecurie Ecosse XK120 fought on track traffic to perform consistently throughout the session. 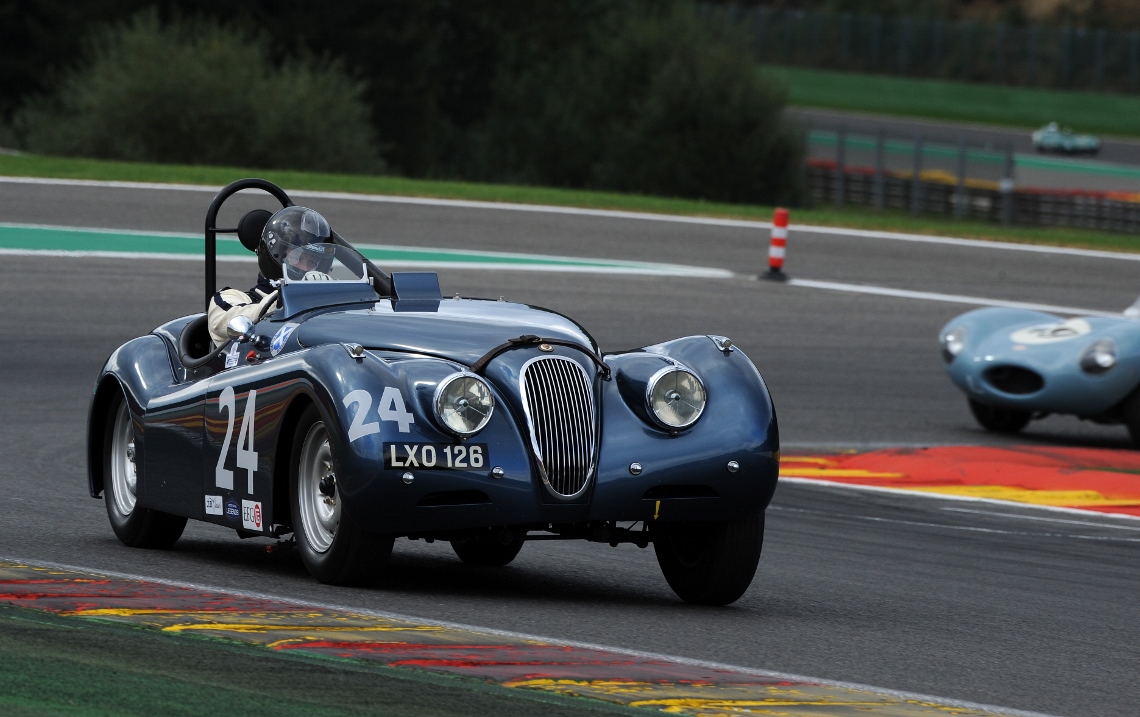 The final session of the day, qualifying for the Six Hour Race took place on Friday evening. Despite rain being forecast, conditions remained dry throughout. With Chris Ward out first, the session was very much a case of trial and error for the team having not competed the car at Spa before. Two laps into the 90 minute session, the GT40 came into the pits as both drivers and team discussed set up changes. Soon after the GT40 was deployed from the pit lane as it shot up into the famous Eau Rouge corner. Within another three flying laps, the car had achieved an impressive lap time of 2:45.6 and was running in 2nd place before once again being bought back into the pits. After one more flying lap for Chris Ward, the GT40 was then bought in for driver changeover. With Andrew Smith now behind the wheel for the remainder of the session, darkness started to descend over the circuit and the team continued to bring the GT40 in every couple of laps to get feedback from both drivers as to its performance and where improvements and changes could be made. Now racing in darkness, the JD Classics GT40 completed the qualifying session in a respectable 9th place. With the on-track action over for the day, the JD team returned to the pits to prep the GT40 ahead of Saturday evening’s six hour race. 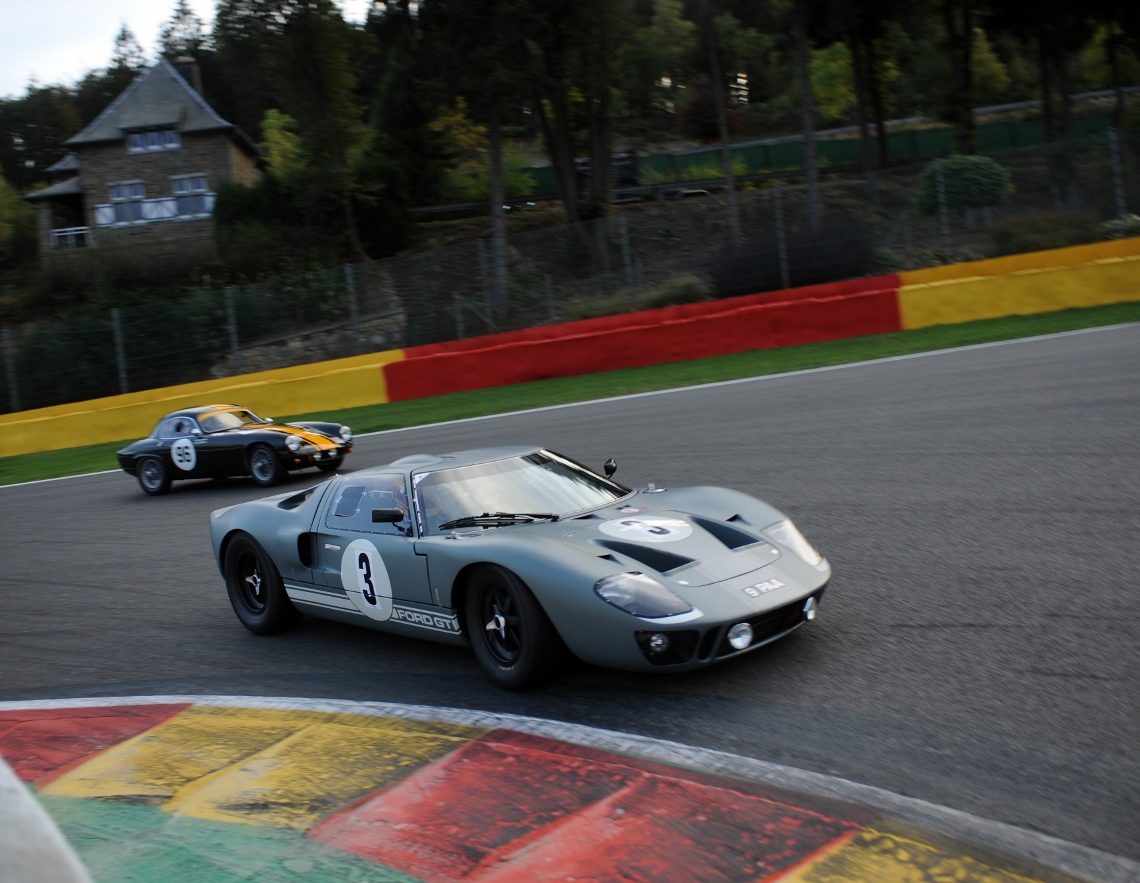 Uncharacteristically warm and dry weather conditions set the scene for Saturday’s racing schedule and the team prepped the three cars ahead of the long afternoon of racing ahead. First out was the Jaguar C-Type of Chris Ward and the Jaguar XK120 of Steve and Josh Ward.
The combined field of sports cars meant that competition was fierce with the Jaguar C-Type sitting comfortably in 9th place. The Ecurie Ecosse XK120 was prepared for its first competitive drive on the notoriously challenging circuit with Steve Ward driving for the first stint. Both cars got off to a clean start as the field pulled away for the hour long race.

With competing cars all required to undertake a mandatory pit stop with cars remaining stationary for 60 seconds, both the C-Type and XK120 performed faultlessly and returned to the race with Josh Ward now behind the wheel of the distinctive blue XK120. With the pit window now closed and just 20 minutes remaining of the race, the C-Type continued to increase his lead and by the time the chequered flag fell was a clear 25 seconds ahead of the second placed car to take the victory within the Woodcote Trophy field and 6th overall. Josh Ward continued to improve on his lap times as the race progressed with an impressive 3:30.5 lap time to finish the race after a consistent performance.

The JD Classics Fangio C-Type of Chris Ward drove to an impressive 1st place within the Woodcote Trophy in the combined grid.

The highlight of the weekend, the Spa Six Hour race comprised of a field of over 100 cars all vying for the coveted title in this highly contested endurance race. Having qualified 9th, the GT40 of Chris Ward and Andrew Smith sat in a prime position on the grid ahead of the start of the race. As the red lights turned to green and the race got underway as the extensive field roared up into Eau Rouge, the JD Classics car got off to a flying start and by Lap 2 had moved up into 6th place. An on-track incident saw the safety car deployed on Lap 12 with the JD Classics GT40 now running in 3rd place behind two of its fellow GT40 adversaries. With two safety cars splitting the large field of cars evenly, the GT40 instantly lost time on the two front runners due to the separation of the field and subsequently losing the JD car another 40 seconds off the second place GT40 of Ollie and Graham Bryant.

After 6 laps behind the safety car, racing commenced at the turn of the second hour and Chris Ward continued the charge as he soon advanced up into 2nd place just 23 seconds behind the front running GT40 of Martin Stretton and Tony Wood. Despite having to negotiate around an oil spill, Chris Ward was in hot pursuit closing the gap from 17 seconds to just under 4 within another two laps. By Lap 28, the JD Classics car was running in 1st place. With the pit window now open, the field began to break up and driver standings changed as cars started coming in for driver changeovers, check overs and refuelling. Running in 3rd place, the GT40 of John Young, Craig Davis and Andy Newall was the first of the front running trio to come into the pits for refuelling with the JD car not far behind coming in on Lap 38. As the race progressed into its third hour, Chris Ward handed the drive over to team mate Andrew Smith who went to refuel the GT40. With drivers having to refuel the cars themselves in keeping with the traditional style of the Six Hour race, Andrew Smith encountered traffic at the fuel pumps hampering the car’s positioning. Now refuelled, he returned to the race in 10th place behind the safety car. 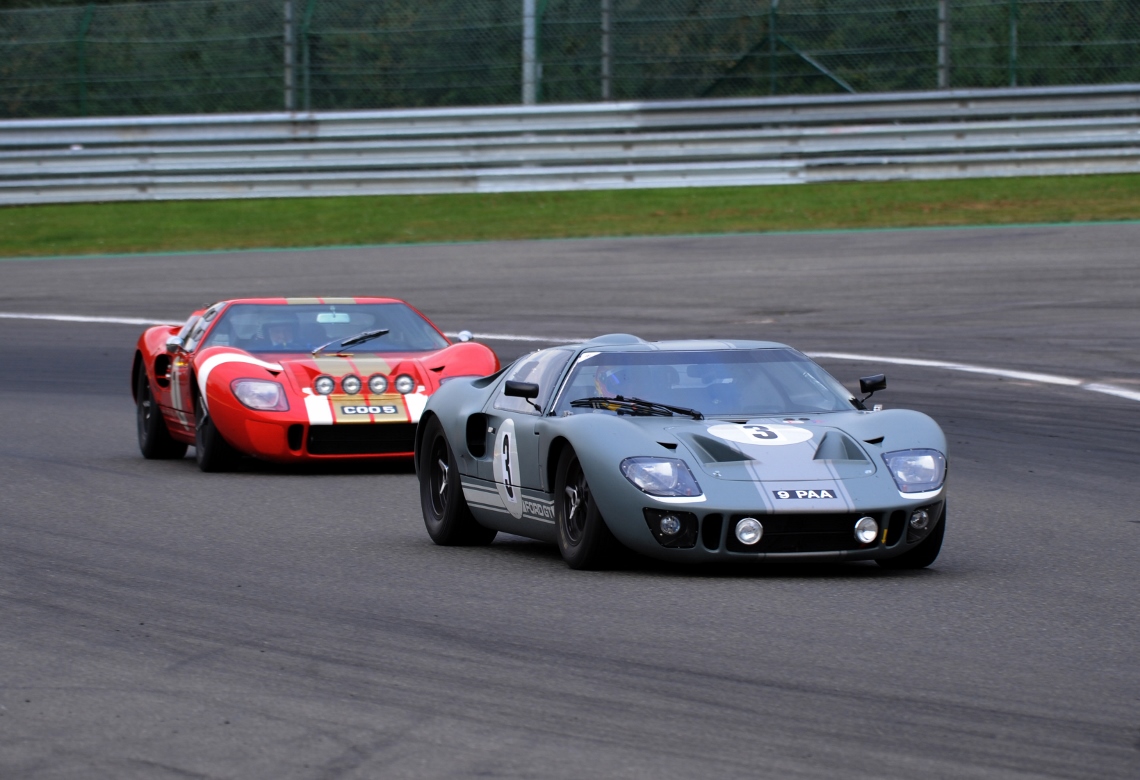 An unstoppable start and real promise of a win for the JD Classics GT40 was hampered by an oil pump housing problem during the Spa Six Hours Race.

With the race back underway, Andrew Smith maintained momentum moving up another two places into 8th place within a lap. With front runner Martin Stretton and Tony Wood’s GT40 called in to refuel on Lap 42 and the JD car now running in 5th, Andrew Smith made good his advance moving the JD car up into 4th place. While in hot pursuit for 3rd place, an oil pump housing issue meant that the JD car had to return to the pits for work. Fixed but 5 laps down and currently running in 21st place, the JD Classics GT40 had some time to make up. With the problem persisting, Andrew Smith returned to the pits the following lap as the pit crew continued their efforts to rectify the issue. This time a longer stop, the GT40 re-joined the race in 76th place with a gap of now 12 laps.  With two hours remaining Andrew Smith slowly but surely worked his way through the field and into 55th place with just 90 minutes of the race remaining.

Lap 62 and Andrew Smith came into the pits to hand the drive back to Chris Ward. A quick driver changeover and it was into the fuelling station for the JD car. Re-joining behind the safety car once again, the race progressed into the last 20 minutes with the JD Classics GT40 coming across the finish line in 66th place.

JD Classics Managing Director, Derek Hood, said: “Spa Francorchamps is still one of the best racing circuits in the world, but also one of the most demanding. To take yet another win for our ex-Fangio C-Type, and to take it at Spa, is an incredible achievement. In the six-hour race our technicians did a fantastic job fixing an issue with the GT40, and having led the race for a long period as well as producing the fastest lap of the race we know it’s got the speed to take the victory next year. We’ll definitely be back.”