Competing in the weekend’s RAC Woodcote Trophy, the JD Classics Cooper T33 of resident driver Chris Ward looked tipped as the one to beat at last weekend’s annual Silverstone Classic hoping to replicate the car’s impressive victory in the Freddie March Memorial Trophy at the Goodwood Revival in September.
Friday’s 30 minute qualifying session took place in warm and sunny conditions as the 43 car grid made their way on track to fight it out for pole position, however it was the JD Classics Cooper T33 that dominated the session qualifying in an unrivalled pole position 1.7 seconds ahead of the Cooper T38 of Fred Wakeman and Patrick Blakeney-Edwards. The Jaguar D-Type of Gary Pearson and John Pearson qualified in third. Having qualified front of the gird, the team prepped the car ahead of Saturday’s race. 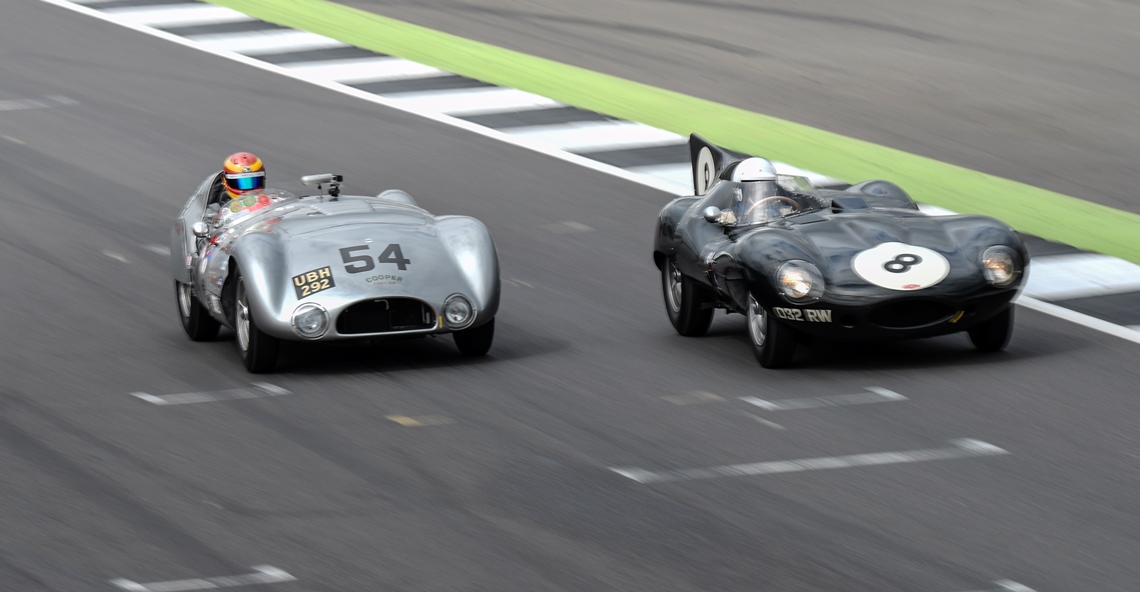 Lining up on the grid for Saturday’s 50 minute race, the RAC Woodcote Trophy got underway with the pole sitting Cooper T33 of Chris Ward getting off to a slow start as the second place Cooper T38 of Fred Wakeman quickly took the lead. A short lived lead, the JD Classics Cooper soon recouped its slow start and had regained the lead by the end of the first lap.
Continuing its charge, the JD Cooper continued to increase its pace as it gradually pulled away from the rest of the field. By the time the pit window opened for the mandatory pit stop, the Cooper’s lead had been increased to 8 seconds. Whilst stationary for the required 60 seconds, the team checked over the JD Classics car and despite taking longer than expected due to a loose wheel, Chris Ward still exited the pits in the lead albeit the gap had now significantly closed up.
The early pit stop allowed the Cooper time to rebuild its lead, however an unexpected misfire meant that Chris Ward succumbed to the pressures of its adversaries as the Cooper T38 of Patrick Blakeney-Edwards claimed the lead. As the chequered flag drew closer, the JD Classics car maintained its chase despite its misfire and a last minute driver error from the front running Cooper T38 gave Chris Ward the opportunity to reclaim the lead with just two laps to go. Holding the lead for the remaining laps, the JD Classics Cooper T33 took an impressive win continuing the team’s impressive record of wins in 2016.