The 5th annual Spa Classic took place this weekend at the iconic Belgium circuit making it a must attend event for any classic car enthusiast over the bank holiday weekend.

Following on from this year’s Mille Miglia in which the team successfully campaigned an extensive 11 car field, the JD Classics Competition Department made the trip to the Spa Francorchamps circuit with their 1974 Ford Cologne Capri. Its first competitive outing of 2015, the powerful JD Classics Touring Car looked set to cause a stir on the notoriously gruelling 4.35 mile iconic circuit having dominated its field during last year’s historic racing calendar.

JD Classics’ resident racing driver Chris Ward shared the weekend’s drive with Andrew Smith for the 2 race round of the Heritage Touring Cup. Echoing the glory days of the European Touring Car Championship between 1966 and 1984, the Heritage Touring Cup is part of the extensive racing portfolio of Peter Auto, whose racing series includes many of Europe’s most prominent historic meetings including the Algarve Classic Festival, Tour Auto and Chantilly Arts and Elegance. 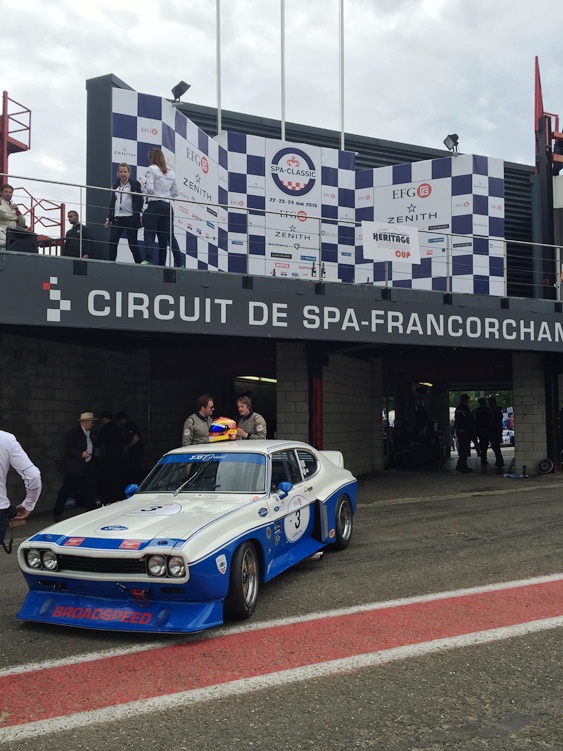 Arriving on Friday morning, there was no time to waste as the team unloaded the car and prepped it ahead of Friday evening’s qualifying session and night time practice.

Conditions remained warm and dry as the JD Capri took to the track for qualifying and with both drivers having completed the required 3 laps per driver, the car qualified on the front row of the grid, close behind the pole sitting Rover Vitesse of Tim Summers and Richard Meaden.

Having qualified well, the team quickly turned their attentions to prepping the car for Friday’s night practice session. Its first run in the dark and fitted with a new lighting system, both the team and drivers alike were keen to see how the car would perform in the dark. True to form, the car didn’t disappoint recording the fastest lap of the session by 6 seconds amongst the 38 car field.

Saturday afternoon’s first Heritage Touring Cup race took place under bright and clear weather conditions, a pleasant surprise at the notoriously rainy circuit. With Andrew Smith behind the wheel for the first half of the hour long race, the Ford Cologne Capri was hot on the heels of the pole sitting Rover so much so that by Eau Rouge of the first lap, the JD Classics car had secured the lead which Andrew continued to extend with every lap. By the time the pit window opened, the Capri’s lead was so that the team were able to bring Andrew in, perform an extended pit stop in order to check the car over, send Chris Ward back out and still maintain its lead position. As the 60 minutes drew to a close, Chris and the Ford Cologne Capri took an unrivalled victory (together with fastest lap of the race) with a mammoth 40 second lead over the second placed and fellow Ford Capri of Steve Dance. 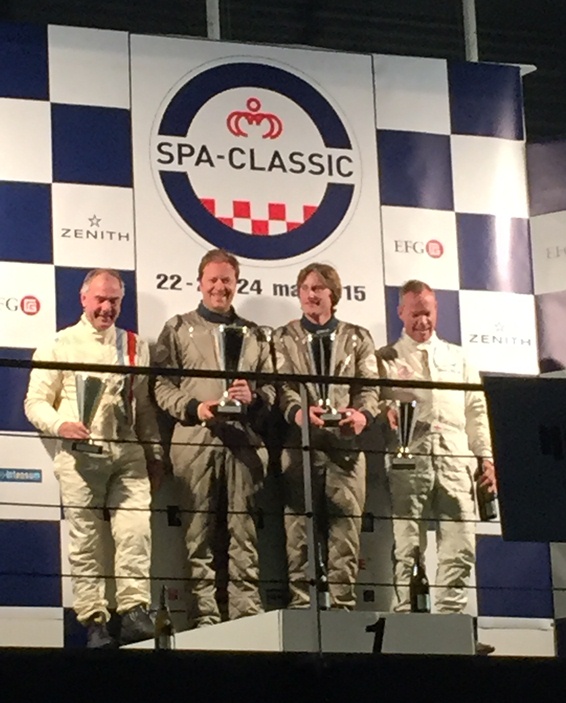 Keen to maintain the momentum for the second of the two races, the JD technicians meticulously checked over the car ensuring it was race ready for another hour of high octane on-track action. Saturday’s night race started at 10pm and once again Andrew took to the wheel for the first stint. Leading the grid off the start line, the Ford Cologne Capri continued to prove its dominance on track, building an ever increasing gap between itself and its field of adversaries. However, by Lap 10 and with the safety car deployed due to an accident further down the field, the gap was closed as the field bunched together. During this time, the team decided to bring the Capri in for its driver changeover and mandatory 60 second stop. Despite the team performing a faultless pit stop, the second placed Capri of Steve Dance also took the decision to pit at the same time and subsequently managed to jump in front of the car and its now driver Chris Ward. The lead was, however short lived as within Sector 2 of the out lap, the JD Classics Ford Cologne Capri was back in the lead where it would remain to take a second victory by an impressive 30 seconds.