A rainy Friday morning got qualifying off to a wet start at this year’s Silverstone Classic. Celebrating the event’s 25th year since its inauguration, JD Classics are this year campaigning seven of their competition car line-up as they prepare to navigate the iconic 3.6 mile long Silverstone circuit. First to take to the track was the JD Classics Jaguar D-Type of in-house driver Chris Ward. With drizzle making track conditions slippery and stiff competition from a vast field of Lotus’, Lister Knobbly’s and fellow D-Types, Chris Ward and the JD D-Type remained undeterred by the inclement weather conditions and was soon producing the fastest times of the field. After putting in 5 consistently fast laps, the team called the D-Type in for its mandatory driver changeover. Having completed the changeover smoothly and now with Andrew Smith behind the wheel, the Jaguar D-Type returned to the track. With visibility rapidly deteriorating and the drizzle turning into heavy rain, Andrew maintained the momentum and as the 30 minute session came to its conclusion, the JD Classics D-Type claimed an unrivalled pole position over three seconds ahead of the second place sitting Lister Knobbly of Tony Wood and William Nuthall. 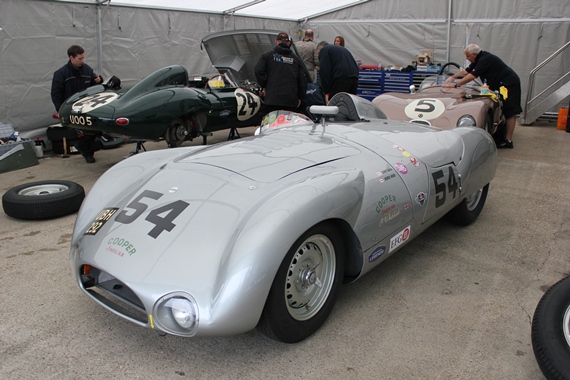 Weather conditions failed to improve and the rain continued to fall heavily as the Woodcote Trophy lunchtime qualifying session got underway. The JD Classics Cooper T33 and distinctive ex-Fangio C-Type which were both hotly tipped to set the pace for the session were driven by JD Classics’ MD Derek Hood and Chris Ward and Chris Ward and John Young respectively. With conditions continuing to deteriorate, the 42 cars took to the water logged circuit as they prepared to battle it out for pole position during the 30 minute qualifying session. With Chris Ward in the C-Type and Derek Hood in the Cooper, both cars performed well putting in consistently strong lap times. Bringing the C-Type in first, Chris Ward passed the drive over to John Young who maintained momentum to bring the C-Type over the line to qualify in an impressive second place on the grid ahead of Sunday’s 60 minute race. No rest for the wicked, Chris Ward had barely time to draw breath when Derek Hood bought the Cooper in ready to pass the remainder off the session’s drive over to Chris. Not to be outdone by its fellow JD racer, the Cooper T33 qualified just behind the C-Type in a strong 3rd place.

The much anticipated Super Touring Car Trophy race was hampered by the weather condition with the circuit now becoming precariously waterlogged making conditions potentially dangerous. With this in mind, the qualifying session began behind the safety car. With three of their most impressive and powerful touring cars taking to the track in anticipation of a high powered 20 minute session, the Bastos Rover of Steve Soper, Ford Cologne Capri of John Young and Group 44 Jaguar XJS of Chris Ward remained behind the safety car for the duration of the session. Because of the treacherous conditions, the organisers took the decision to disregard the qualifying session due to safety reasons, instead basing starting positions on each individual touring car’s previous racing performances. 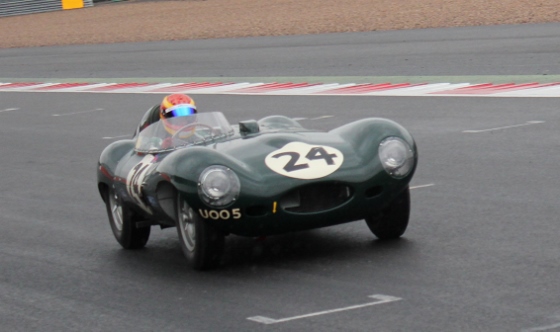 Similarly to the rest of the afternoon’s on track action, qualifying for the Jet Battle of Britain Trophy race was hampered by the weather with the 15 minute session running behind the safety car therefore the grid and the position of the JD Classics lightweight E-Type ‘1196 WK’ would also be determined by each entries previous racing performance.

Waking up to sunny and dry conditions, the JD Classics Jaguar D-Type looked set to make its impression on the field ahead of Saturday morning’s Stirling Moss Trophy. A 50 minute race, the D-Type of Andrew Smith led the field away from the start-finish line, however a surge from more powerful sports cars caused the D-Type to slip back to the middle of the field and by the time the pit window opened for driver changeovers, the D-Type was running in 14th place. Returning to the race now with Chris Ward behind the wheel, the D-Type started to gain momentum, recovering position lap by lap and eventually coming across the finish line claiming a respectable 8th place and 1st in class amongst a field of its more powerful contemporaries.

The torrential weather conditions that plagued Friday’s qualifying session meant that the JD Classics Touring Car trio were all positioned mid grid ahead of Saturday afternoon’s Super Touring Car Challenge. Its first JD Classics competitive outing at the iconic Silverstone circuit, the Bastos Rover of Steve Soper fell victim to an axle failure due to the stresses put on the car as a result of a weekend of hill climb demonstrations at last month’s Goodwood Festival of Speed. A faulty clutch slave cylinder meant that the usually dominant Ford Cologne Capri of John Young retired in the early stages of the 20 minute race. Sitting mid field, the Group 44 XJS of Chris Ward got off to a good start and made a charge through the field rivalling some of the more modern machinery and maintained the pace to complete the race in an impressive 8th place also claiming a class victory, it’s first since being acquired and campaigned by JD Classics. 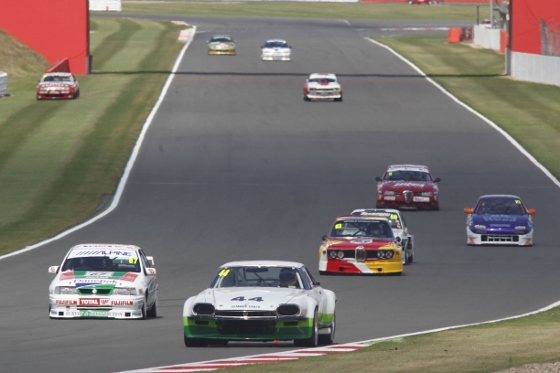 Celebrating the best that manufacturers had to offer in the Golden Age of British car production, the newly added Jet Battle of Britain Trophy race saw a field of 46 1960s produced cars line up to tackle the 20 minute race. Starting 6th on the grid, Steve Soper and the JD Classics E-Type got off to a good start running a solid performance from start to finish and moving through the field to claim a well-deserved 3rd place.

As Sunday dawned, so the wet weather that plagued Friday’s qualifying sessions reared its ugly head once more. First out to brave the conditions was the Woodcote Trophy field for their 60 minute race. With a vast field of 42 competitors, the C-Type of John Young and Chris Ward and the Cooper T33 of Chris Ward and Derek Hood stood competitively in 2nd and 3rd position on the grid respectively. A rolling start saw the field fly away from the start finish line being led by the pole sitting Aston Martin DB3S of Wolfgang Friedrichs. A good start from 4th place sitting Gary Pearson saw his D-Type take an early lead, however the JD Classics Cooper T33 was hot on his heels and by the second corner, Chris Ward had manouevered the car up into the lead. The JD Classics C-Type of John Young was also holding strong in 2nd place. As weather conditions continued to deteriorate, the Cooper made an unexpected return to the pits with a suspected oil leak which was quickly rectified by the team before returning to the track. Having completed his stop-go penalty issued for speeding in the pit-lane the lap before, Chris Ward returned to the pits once more to hand over to Derek Hood who quickly returned to the track mid field. Soon afterwards, the C-Type was brought in and John Young handed the remainder of the hour long drive to Chris Ward. As the chequered flag fell after a challenging and very wet 60 minutes, the C-Type maintained its dominance to claim an impressive victory for the JD Classics team. The Cooper T33 also ran a consistent race to come home in the top half of the 42 car field, achieving 4th in its class and the fastest lap of its class. Another impressive performance by JD Classics in spite of the adverse weather conditions. 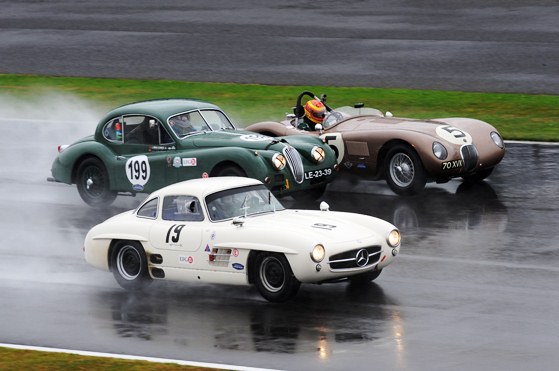