Situated in the stunning grounds of Blenheim Palace, the annual Chubb Insurance Concours d’Elegance at Salon Prive is considered, alongside Pebble Beach Concours d’Elegance and Villa d’Este as one of the most established concours events with the World’s premier historic classic cars vying for the coveted Best of Show award. With an array of priceless examples to choose from, the 18 person judging panel of automotive professionals headed by five times Le Mans winner Derek Bell would be awarding the coveted accolades throughout the day.

JD Classics were proud to be in attendance this year, presenting a Jaguar XK120 Works Competition car on behalf of a customer. The XK120 commonly referred to by its registration ‘MDU 524’ is widely regarded as one of the World’s most famous and distinctive of its model in existence. Manufactured in 1952, ‘MDU 524’ was originally enlisted by Jaguar Cars as a Works Competition Car and was subsequently used for the 15th running of the Rallye International des Alpes. Its biggest achievement however came in 1953 when the car challenged the Flying Mile Record attempt on the Jabbeke Highway in Belgium. With the aim to reach 140 miles per hour, the then Jaguar chief test driver and development engineer Norman Dewis drove the XK120 to attain a record breaking speed of 140.789 miles per hour. With a V8 engined Pegaso achieving over 150mph later that year, Jaguar set to work streamlining the car’s body, the most notable addition being the unique Perspex bubble over the driver’s head. By late 1953, ‘MDU 524’ was ready for another attempt, one of which exceeded all expectations with the XK120 reaching an average Flying Mile Speed of 172.412 miles per hour – a record of which is still held by the car over 60 years later. 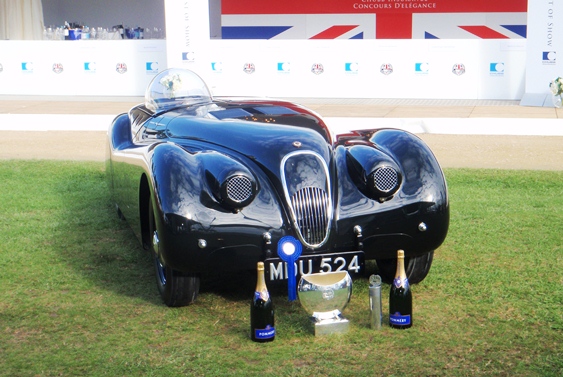 In 2013, the car underwent a full JD Classics restoration to period Jabbeke record attempt specification with the help of Norman Dewis who offered technical advice and assistance.

Competing concours cars and motorbikes were paraded through the extensive grounds of Blenheim Palace for guests to admire before being presented to the judging panel. Returning the cars to static display, the judges made their decisions, awarding Jaguar XK120 ‘MDU 524’ not only Best in the ‘Post-War Coachwork’ class but was also presented the highest accolade of Best of Show, beating cars spread across 10 select classes.