The annual Monterey Classic Car Week attracts a variety of the World’s most impressive classic car examples, 200 of which congregate at the end of the week on the 18th fairway of the Pebble Beach golf course for the World renowned Concours d’Elegance. Privileged to be involved for another year, JD Classics were invited to compete a 1950 Aston Martin DB2 Saloon on behalf of a customer which had recently undergone JD Classics major detailing.

The highlight of the week, the Concours d’Elegance is preceded by its sister event, the Tour d’Elegance which sees all concours participating cars drive the 80 mile course along the Monterey Peninsula following the 17-Mile Drive to Highway Number 1 and Big Sur before heading back towards Carmel-by-the-sea. The JD Classics prepared Aston Martin DB2 completed the course successfully, attracting attention from many of the spectators lining the roads.

Having successfully completed the Tour d’Elegance, the JD Classics technicians and valeters spent Saturday cleaning and preparing the Aston Martin for its debut at Sunday’s Concours d’Elegance. 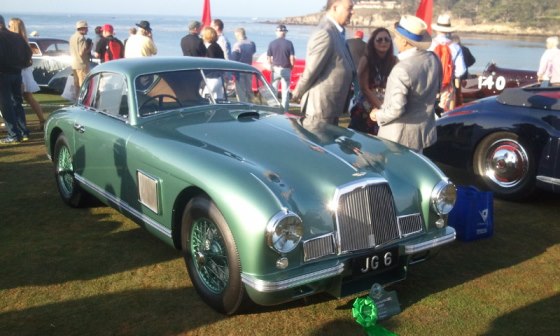 The 1950 Aston Martin DB2 Saloon took pride of place on the 18th fairway having been awarded 3rd place in its Post-war Touring class.

As Sunday drew round, the 200 strong pack of carefully selected cars gathered on the famed 18th fairway as the annual Pebble Beach Concours d’Elegance commenced. With a wide selection of classes in competition for coveted class wins and trophies including Pre-war Preservation, Open Wheel Race Cars and Rolls-Royce amongst others, the Aston Martin fought off stiff competition within Class O-1: Post-war Touring to be awarded 3rd in class. A great result for the Aston Martin in its first concours appearance and a testament to the hard work and dedication of the JD Classics technicians in producing our first concours competition Aston Martin.

Although not competing as a JD Classics entered car, the 1949 ex-Clark Gable Jaguar XK120 was also in attendance at this year’s The Quail: A Motorsport Gathering. Restored to its original specification during a two year long restoration undertaken by JD Classics, the XK120 made its post restoration debut at Pebble Beach in 2012 and to great accolade, was awarded best in its class within the ‘Post-war Sports Open’ class.

When speaking of this year’s achievements at Pebble Beach, JD Classics MD Derek Hood said: “I’m immensely proud of our technicians and their ability to win major Pebble Beach concours prizes every year for the last 6 years. It is a true testament to JD’s ethos of producing the best possible cars, be it for the road, concours, competition or historic racing”