With just 450 accepted entries Worldwide, the annual Mille Miglia still stands as the most coveted rally event in the World showcasing a variety of the most impressive classic cars in existence and with increasing numbers of cars vying for one of the sought after entries, JD Classics were pleased to be invited to compete not 1 but an extensive group of 11 of their classic cars in this prestigious event.

Campaigning a mixture of company owned and customer cars, JD Classics entered with 5 Jaguar XK120s, 2 Alfa Romeo’s, a 1954 Lincoln Capri, 1955 Aston Martin DB2/4 together with the 1951 Jaguar MK7 of JD Classics Managing Director Derek Hood and Competition Department Manager Steve Riedling and the infamous 1952 Fangio C-Type of JD Classics’ resident racing driver Chris Ward and professional navigator Andy Elcomb. Needless to say that with such a line-up, the 2015 Mille Miglia looked set to showcase the work of JD Classics better than ever before.

Competing cars congregated in the Brescia Trade Centre to begin the process of driver signing on and scrutineering the car. As a gold sponsor of the event, JD Classics also hosted a hospitality lounge for all competing crews throughout the scrutineering process. Once completed, all competing cars gathered in Brescia’s Piazza Della Loggia for sealing, a tradition of which stems back to the rally’s period days. With all the formalities complete, the extensive 450 car field prepared for Thursday afternoon’s first leg from Brescia to Rimini.

A relatively short leg, the first of the JD cars arrived in Rimini at 10pm allowing support crews to prepare the car for the following days much longer leg down to Rome. The Alfa Romeo 1900C Pininfarina experienced a fuel pump failure and despite the support technicians quickly fitting a spare one, it wasn’t long before the second fuel pump failed due to a faulty batch of manufactured pumps. Nursed back to the parc ferme in Rimini, the support crew spent the night adapting a spare pump from another car to successfully fit to the Alfa. 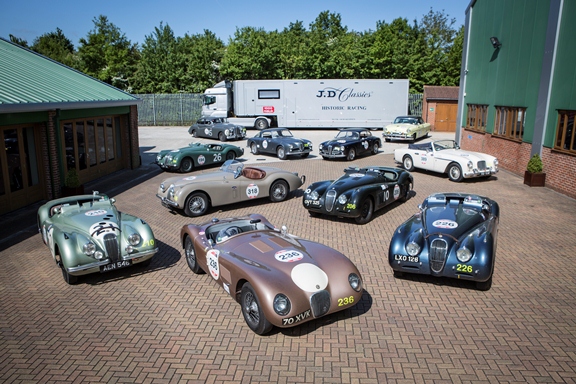 An early start on Day 2 saw the Mille Miglia leave for a long day of negotiating some of the notoriously challenging but spectacular mountain terrain down to Rome. With a total of 13 hours on the road, both competing and support crews were glad of another successful and safe arrival to Rome. With drivers heading to bed for some sleep after another long day, the support crews worked through the night to ensure all competition cars were ready for Day 3 of the gruelling 1000 mile rally.

The longest of the rally, Day 3 saw competing crews tackle a gruelling 15 hour stint from Rome to Parma. Once again, the picturesque but challenging route continued to test both the cars and drivers to their limits. The Aston Martin DB2/4 fell victim to a broken fan belt after going into a patch of gravel shortly before its arrival in Parma, however the unfaltering work of the JD Classics support crews meant that the problem was soon after rectified and the Aston Martin was back on fighting form for the final leg of the rally back to Brescia.

In beautiful sunshine, the field returned to Brescia on the Sunday with all JD Classics campaigned cars and their respective crews arriving across the finish ramp making JD Classics the largest British team to successfully complete the notoriously challenging Mille Miglia 2015. With all 11 cars completing the rally, JD Classics have yet again proved testament to the hard work and commitment that goes into producing the World class cars which JD Classics have become synonymous.

Speaking of JD Classics’ Mille Miglia success, Managing Director Derek Hood said: “As, always, a superbly organised event with this year’s route being one of the best to date. I am so pleased all of our customers had a fantastic event – the feedback has been amazing and we are all really looking forward to next year”.