The World Leading Brand Since 1987

JD Classics prepared for yet another high octane weekend of racing at this year’s Goodwood Revival. With six cars competing, three JD course cars, a Ferrari 275 on static display not to mention JD Classics acting as one of 2015’s major sponsors, the weekend looked set to be an exciting one as the team prepare for Friday’s qualifying sessions. First out on Friday morning will be JD Classics' MD Derek Hood and Chris Ward qualifying the Cooper T33 in the Freddie March Memorial Trophy.

The 30 strong grid took to the track for the weekend’s first session to qualify for this evening’s 90 minute two driver Freddie March Memorial Trophy. First out in the distinctive Cooper T33 was JD Classics’ MD Derek Hood who maintained a strong performance throughout his 15 minute stint amongst a highly charged field of C-Types, Aston Martins and a fellow Cooper T33. Having handed the remaining 15 minutes over to Chris Ward, the Cooper maintained the momentum to complete the qualifying session with an unrivalled pole position for JD Classics. A great start to the weekend’s action as the team turn their attentions to their pair of competition XK120s and qualifying for the Fordwater Trophy grid.

Not one but two of JD Classics competition XK120s took to the track to qualify for Friday morning’s Fordwater Trophy grid. Having recently completed the gruelling Mille Miglia, Jaguar XK120 ‘OVT 325’ was driven by JD Classics regular John Young. Unable to stay away, Derek Hood was back in the midst of the on track action in the other JD Classics XK120 recognised by its registration number ‘JWK 651’. With 29 post-war production sports and GT cars vying for the coveted pole position, John Young dominated the qualifying session to take pride of place on the first row of the grid in ‘OVT 325’ 2.7 seconds ahead of the second placed Porsche 356 of journalist Chris Harris. Derek Hood also performed well to qualify in 10th place. 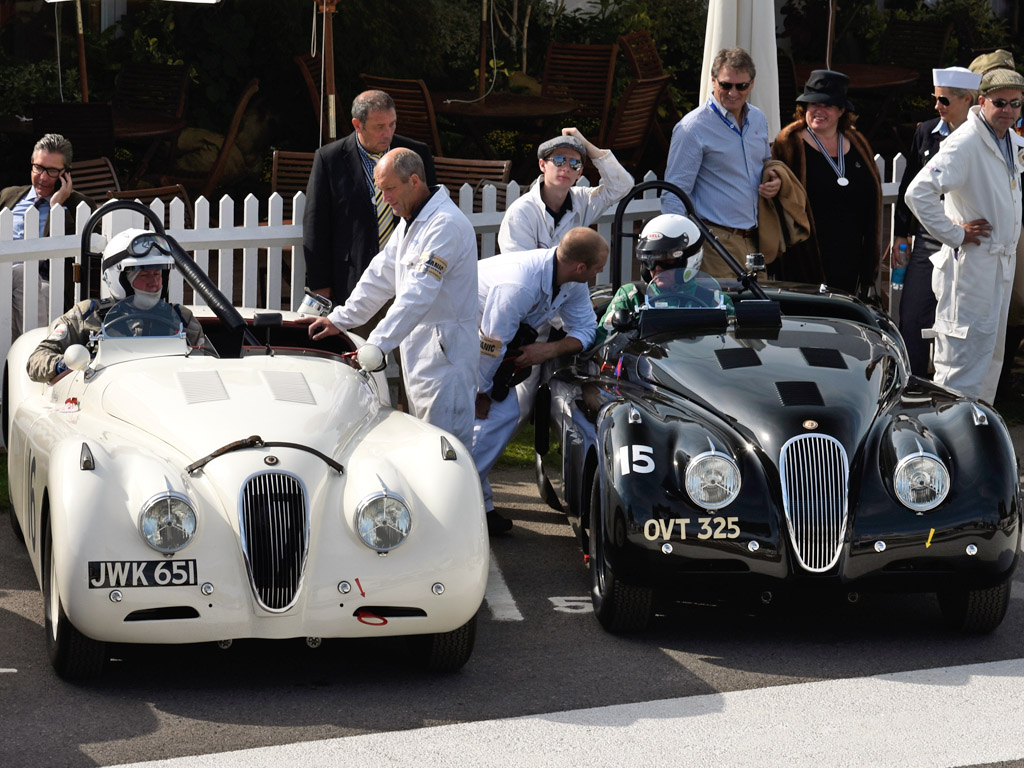 The XK120 pairing of Derek Hood and John Young prepare for qualifying ahead of Saturday's Fordwater Trophy race.

With two successful qualifying sessions and two pole positions already in the bag, JD Classics were keen to maintain the momentum so far as their Jaguar D-Type and Costin Lister took to track from the 15 minute long Sussex Trophy qualifying session. With Andrew Smith and Chris Ward driving respectively, the field exited the pits as qualifying got underway. An array of sports racing cars from 1955-1960 including Ferraris, Aston Martins and Maserati’s formed the field and as the session progressed the Lister of Chris Ward produced some competitive lap times to qualify in 2nd place a mere 0.4 seconds behind the pole sitting Ferrari 246s Dino of Bobby Verdon-Roe. The Jaguar D-Type of Andrew Smith also performed well to qualify in 16th place.

As the daylight descended into early evening, the 90 minute Freddie March Memorial Trophy got underway as the pole sitting JD Classics Cooper T33 led the field away from the start/finish line. With Derek Hood behind the wheel for the first stint of the race, he maintained the lead well fighting off some stiff competition from his contemporaries. By Lap 5 and due to a car that had ran off course the safety car was deployed allowing the field to close up again. With the Cooper currently running in 3rd place, the fourth placed sitting Cunningham C4R pulled an illegal move overtaking the T33 whilst running behind the safety car. Despite this, once the safety car exited the track and the race resumed, Derek Hood maintained the pace to reclaim his 3rd position. As the race approached the 35 minute mark, Derek Hood came into the pits to pass the remainder of the 90 minute race over to Chris Ward. Maintaining the momentum, the JD Classics T33 had not only set the fastest lap of the race but Chris Ward had driven the car into 2nd place within a couple of laps. It wasn’t much longer into the race before the Cooper had returned to the front of the pack. Having settled into a comfortable lead and pulling away with every lap, so the typically British weather made its appearance as it started to rain. With conditions slowly becoming more tricky, Chris Ward managed to keep control of the car in the ever decreasing on track conditions. In spite of this, by the time the chequered flag had dropped, the Cooper had been driven to a dominant win, having lapped the second placed car in its charge for victory. Speaking of his first victory at Goodwood, Derek Hood said: ‘I can’t believe I got my first win at Goodwood. It was a great team effort and the car ran faultlessly – a big thanks to all the team!’ 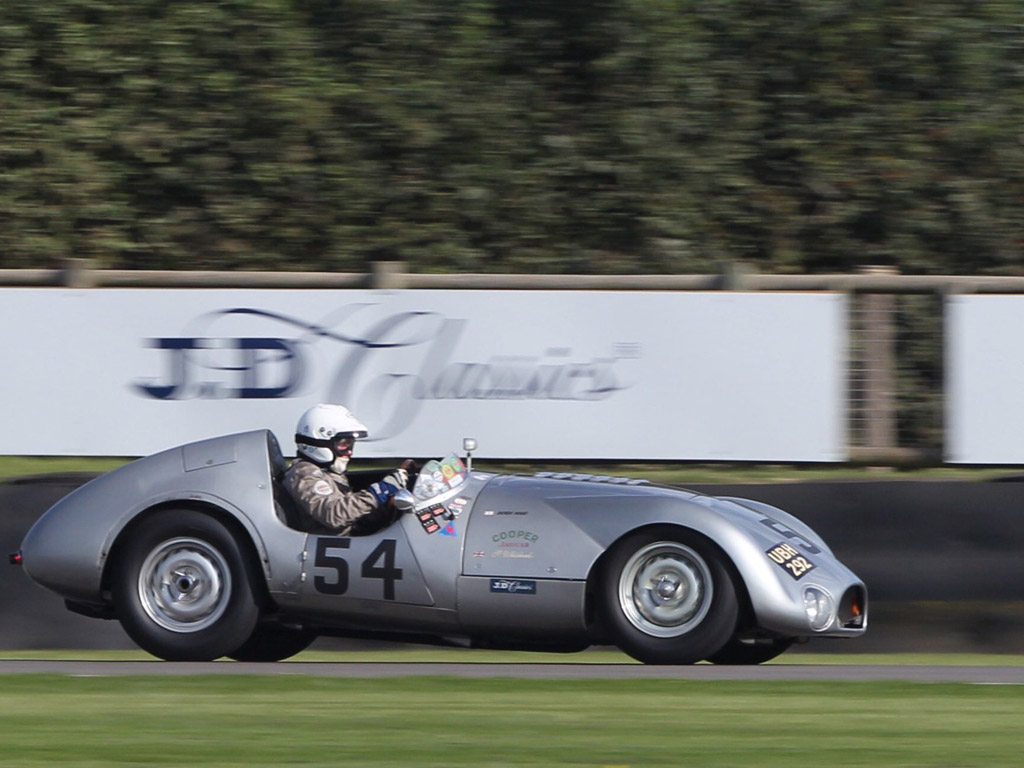 Fordwater Trophy (Race) - 10.45-11.05
With the track continuing to dry after overnight rain, the 45 minute Fordwater Trophy got underway on Saturday morning. With the pole sitting JD Classics XK120 of John Young and 10th placed fellow XK120 of Derek Hood, the flag fell and the field of production sports and GT cars stormed away from the start line. A slow start for the pole sitting John Young, it was Chris Harris and his Porsche 356 which took the early lead, however John Young was hot on his heels and by the end of the first lap had returned to his original placing at the front of the pack. Having reclaimed the lead, there was no looking back for Jaguar XK120 ‘OVT 325’ of John Young as he continued to increase his lead lap by lap coming across the line to the chequered flag and a well-deserved win. Derek Hood also ran well throughout the duration of the race having moved up into 9th place and over the finish line.  The second consecutive win of the weekend, JD Classics’ Competition Team were hopeful to maintain their current level of performance for the remainder of the weekend.

The final qualifying session of the weekend took place on Saturday lunchtime with the JD Classics lightweight E-Type of Chris Ward and Gordon Shedden in strong contention for the coveted pole position within the highly charged field. The ‘showpiece’ race of the weekend, the RAC TT Celebration pits some of the World’s most unique historic racing examples against each other. With a collective worth of this year’s TT grid estimated in excess of £150 million, it is no wonder that this race is considered one of the highlights of the weekend.
First to the driver’s seat was Chris Ward who exited the pits in a bid to improve on yesterday’s free practice session times. Having successfully put some competitive times in, he handed the remainder of the qualifying session over to co-driver Gordon Shedden who continued the E-Type’s charge. About to complete its second flying lap, the E-Type was stopped in its tracks when the session was red flagged due to a Cobra spinning off and smashing through the chicane barriers. With just six minutes remaining, the session was halted whilst the car in question was removed from the track and the debris cleared up. Once the session resumed, the JD Classics E-Type matched Friday’s practice time of 1:25.7 to qualify the car in an impressive 3rd place a mere half a second behind the pole sitting Cobra which had set a new track record of 1.25:1 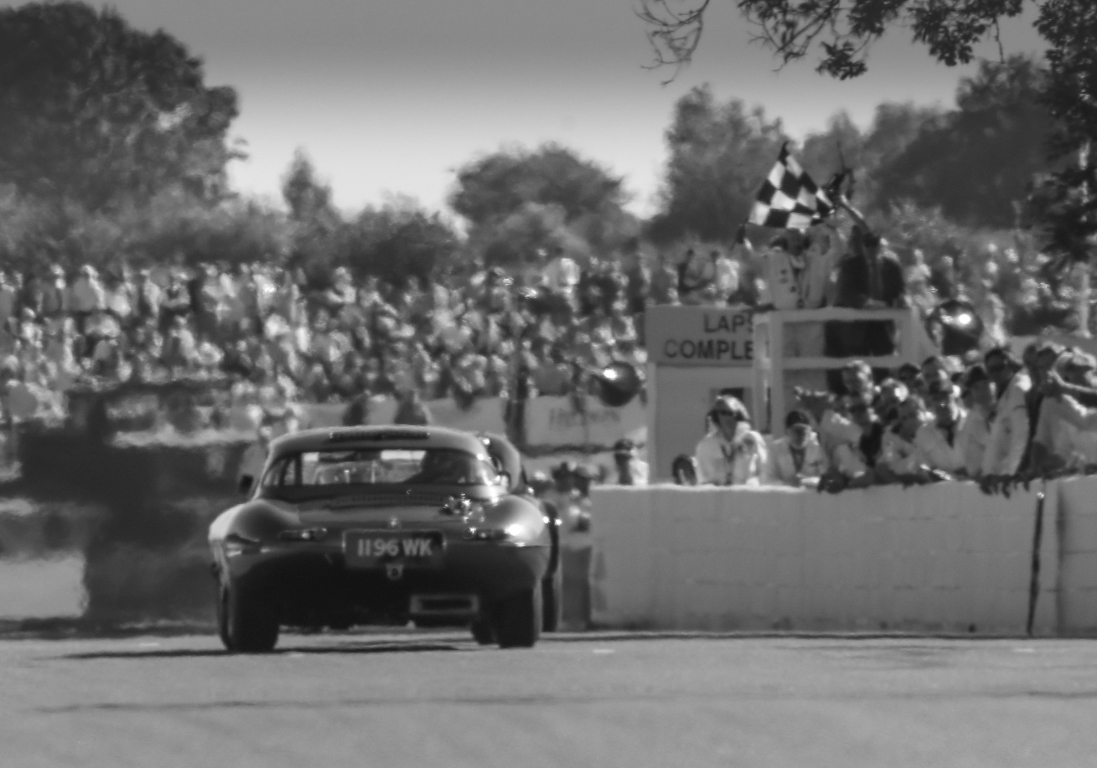 The highlight race of the weekend took place on Sunday afternoon as the JD Classics Lightweight E-Type of Chris Ward and Gordon Shedden lined up in third place on the grid ahead of the prestigious 60 minute RAC TT Celebration race. Regarded as the one to win at the Goodwood Revival, Chris Ward lined the E-Type up in third place behind two powerful AC Cobras. As the flag fell, the field of early 1960s GT cars sprinted down into Madgwick and although losing a place in the first corner, the JD Classics E-Type had reclaimed its third place positioning by the end of the first lap. As the weekend’s most hotly anticipated race started to get into its stride and the two front running Cobras looked set to dominate the race, Chris Ward began to make his attack as he closed in on the second placed Cobra of David Hart and Giedo Van der Garde. Claiming the Cobra and moving up into 2nd place by Lap 4,  it was only another two laps before Chris Ward had also overtaken the front running Cobra of Andrew Smith and Ollie Bryant through Woodcote to now be leading the raging pack of GT cars. With this, the JD E-Type was unstoppable as Chris Ward gradually pulled away from the field extending the lead to 10 seconds by the time the pit window opened for driver changeovers. With a quick and seamless driver changeover performed by the JD Classics technicians, Chris Ward was out and Gordon Shedden jumped into the driver’s seat. Re-joining the race now in 4th place, within 10 minutes of his 40 minute stint, the British Touring Car driver had pushed the E- Type back into the lead as the field started to come in to perform their mandatory driver changeovers.
As the race entered the latter stages, the E-Type remained dominant as Gordon Shedden continued to distance the E-Type from the rest of the field to take an unrivalled victory for the JD Classics team. The most prestigious racing accolade to achieve at the Goodwood Revival, driver Chris Ward said  ‘What a fantastic result for JD Classics. We could hardly believe that our E-Type would dominate a race filled with cars such as AC Cobras which are significantly more powerful. The hard work of the JD Classics team, both drivers and technicians alike is reflected in these such performances and we are very proud of our achievements as a company. Here’s to next year’s Revival!’ 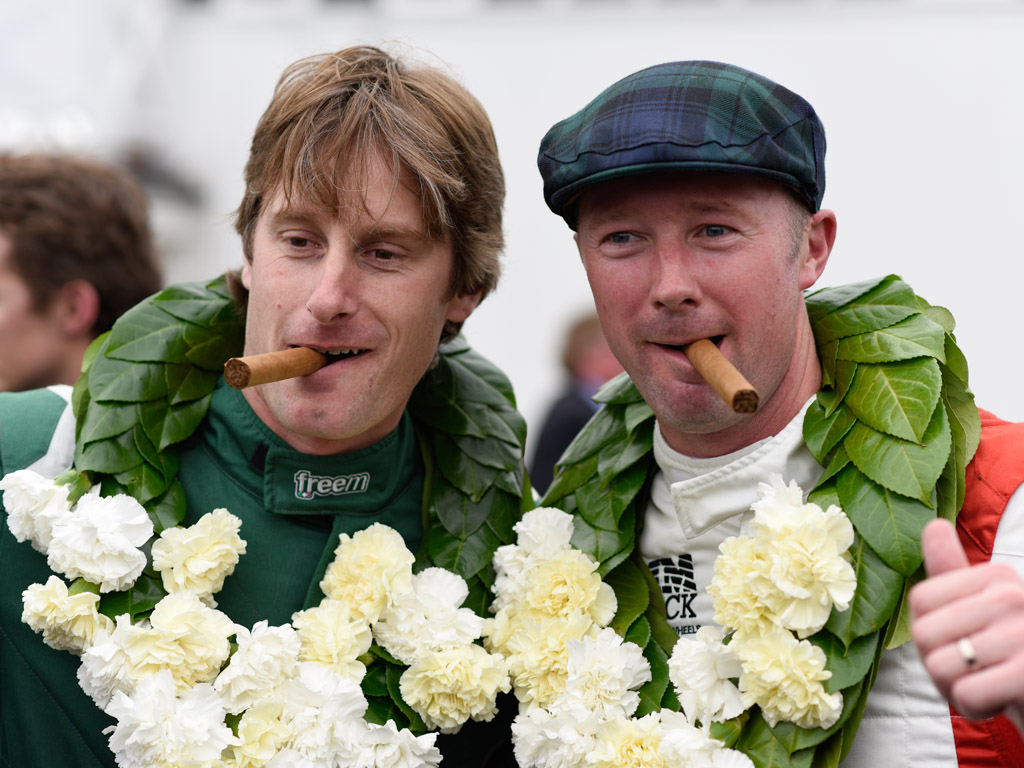 The final race of the weekend saw the JD Classics Lister and Jaguar D-Type driven by Chris Ward and Andrew Smith line up for the 25 minute Sussex Trophy. Having qualified in 2nd and 16th place respectively, both drivers were hoping to continue the success of JD Classics’ weekend so far.

As the field of historic sports cars charged into the first corner, the Lister of Chris Ward made good hi9s flying start to take the lead from the front running Ferrari 246S of Bobby Verdon-Roe and within 5 minutes of the race commencing, the JD Lister had already built up a 1.7 second lead. Just when the Lister looked set to pull away from the field and charge to another victory, Ward signalled to the technical crew that there was some sort of gear issue with the car which caused the Ferrari 246S to reclaim the lead. Meanwhile, the Jaguar D-Type of Andrew Smith had to contest a misfire problem which ultimately led to the retirement of the JD Classics Jaguar D-Type. In spite of the fact that the Costin Lister was stuck in 4th gear, Chris Ward continued to battle Bobby Verdon-Roe in the tussle for the lead coming across the finish line to a well-deserved 2nd place.

In the final race of the weekend, Chris Ward drove the Costin Lister to a second place in the weekend's Sussex Trophy.

With a weekend consisting of two pole positions, four podiums and three outright wins including the prestigious RAC TT Celebration, JD Classics are tonight celebrating their most successful Goodwood Revival to date and as proud sponsors of the 2015 edition look forward to collaborating in the future both on and off track.

JD Classics are also happy to announce that resident driver Chris Ward was awarded the prestigious award of Rolex Driver of the Meeting by Lord March for the 2015 Goodwood Revival.