Running since 1905, the Brighton Speed Trials is one of the World’s longest running motorsport events, this year celebrating its 110th annual running since its inauguration. With a varied mix of both competiton and road cars as well as motorcycles participating, JD Classics took part in this year’s event with their 1954 Cooper T33 in what was car’s second Brighton Speed Trial event. Competing in period in 1955, the Cooper was driven by its then owner Cyril Wick who drove the distinctive racer to the accolade of best time of the day for sports cars over 2501cc with a time of 25.30 seconds.

60 years on and with JD Classics MD Derek Hood behind the wheel, the Cooper T33 once again returned to the picturesque Madeira Drive on the Brighton seafront to take on the quarter mile long sprint once more. 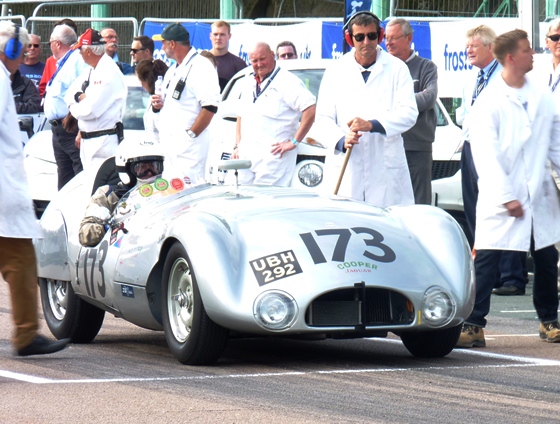 As the crowds began to gather, the weather started the day’s proceedings off in typical British seaside style with early morning rain making the run damp and conditions slippery. With just under 90 cars taking part across 14 classes, competition was fierce. In spite of this, the JD Classics Cooper T33 of Derek Hood maintained a continually strong performance throughout practice and both timed runs to achieve an unrivalled class win in Class C13 for Sports Car constructed on or before 31st December 1959 with a fastest time of 13.90 and a top speed of 106 miles per hour.

Speaking after his class win, Derek Hood said of the event: ‘I had a great day, this was my first speed trial. After my first run I wanted more and as the day went on I got the hang of what was needed to get a good timed run, simple really stop the wheel spinning - it looked impressive but did not help my time. The organisers should be commended for their no fuss approach. A great British event, long may it continue.’