Fresh from an exciting weekend of racing at the annual Goodwood Revival, the JD Classics team headed to the notoriously challenging Spa-Francorchamps circuit for the 2014 Spa Six Hour event with two of their historic racing cars in tow; 1959 Jaguar Costin Lister and the 1954 Cooper T33. Having competed at the Revival the weekend previous, both cars faced a quick turnaround to get them race ready for the gruelling terrain of the Spa Francorchamps circuit.

Qualifying for the large combined Stirling Moss and Woodcote Trophy field got underway on Friday morning with overnight rain leaving a damp but drying track. The JD Classics Costin Lister of Chris Ward set the early pace in the 40 minute session, however an accident amongst the crowded combined field meant that the session was red flagged. Once resumed, the Lister remained in the pits until the damp track conditions improved in an attempt to put in a couple of flying laps in the last 10 minutes of the session. The Lister returned to the track to complete just one more lap before the session was red flagged once again and subsequently cancelled due to another accident. Having completed only a few laps, Chris Ward had managed to qualify the Lister in a comfortable 2nd place on the grid behind the Ferrari 246S of Bobby Verdon-Roe. The Cooper T33 of Derek Hood and John Young also qualified as part of the extended Woodcote Trophy field in 18th place our of a vast field of almost 60 runners.

By Saturday’s midday race, the on track conditions had dried as the large field lined up on the grid ahead of the 61 minute race in glorious sunshine and warm conditions. Sitting alongside the Ferrari 246S, Chris Ward and the Lister tucked in closely behind the pole sitter as the field were lead away from the start line. As the front running Ferrari of Bobby Verdon-Roe began to pull away having built up a 2 second lead within the first couple of laps, the Lister of Chris Ward promptly responded by closing the gap as he began to eat into the 2 second lead. Remaining in hot pursuit for the next 25 minutes, the pit window opened and the Ferrari entered the pits for the mandatory pit stop. With this in mind, Chris Ward made good use of the time to put in a fast lap, thus allowing the JD Lister to create a big enough lead to exit the pits in the lead after the compulsory pit stop. 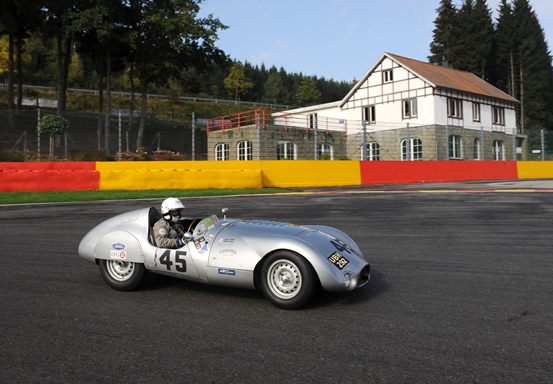 The Cooper T33 of Derek Hood and John Young competed in the combined Woodcote Trophy and Stirling Moss Trophy at this year's Spa Six Hour event.

With the Lister now in the lead, the Ferrari could not keep up with the pace of the front running JD Classics car due to a clutch problem and Chris Ward maintained an unrivalled lead to take the victory within the combined Woodcote and Stirling Moss Trophy field for the second year in a row in the fearsome 1959 Jaguar Costin Lister. With Derek Hood taking the Cooper T33 drive for the first stint of the race, he maintained a strong drive despite the crowded on track conditions before handing over to John Young when the pit window opened. By the time the 61 minutes were up and the chequered flag had fallen, the Cooper T33 finished the race in 20th place and 4th in class.