On its first outing of the 2014 Historic Racing Season, the JD Classics Lightweight E-Type ‘1196 WK’, complete with JD’s latest generation high torque competition engine, made its season debut at last weekend’s Autosport 3-Hour Race Meeting held at Snetterton. Celebrating the half centurion of Jack Sears’ win in 1964, the weekend’s self-titled race saw a large field of 34 GT and Sports Cars take part in the commemorative race. Having not raced since the Algarve Historic Festival back in October, the JD Classics Racing Team prepared the car for an open test session on Friday in order to shake down the car and scrub two sets of tyres ahead of the afternoon’s qualifying session. 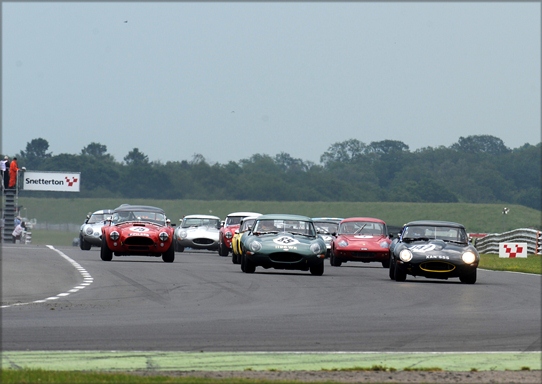 The 34 car strong field storm away from the grid in Snetterton's famous 3-Hour Race.

Friday’s qualifying session took place in warm and sunny conditions with both drivers, Alex Buncombe and Chris Ward, doing stints in the Lightweight E-Type. Despite strong competition from the varied field of cars and it being Chris Ward’s first outing on the new circuit layout, the JD E-Type qualified on pole almost a second ahead of the Jaguar E-Type of Chris Scragg and Matt Nicoll-Jones. Having not raced on the new and improved 300 circuit before, qualifying also allowed the team to determine their fuel strategy ahead of Saturday’s long race. 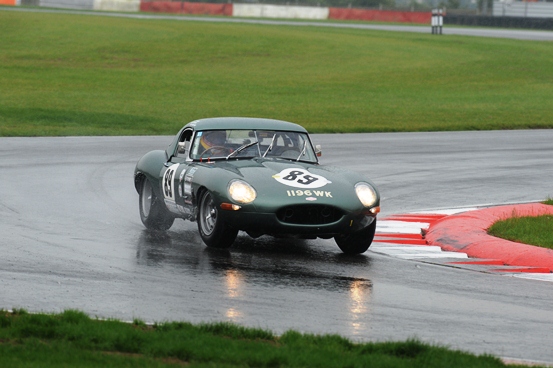 With a heavy downpour of rain hampering many competing cars, the JD Classics E-Type maintained a steady lead throughout.

Saturday morning’s three hour race was bought forward by 20 minutes for a start time of 10am and with overcast weather conditions, the threat of rain looked set to provide a potentially lively race for the 34 cars lining up on the grid. With Chris Ward starting, the JD E-Type slotted into 2nd place as the pack pulled away from the start line but by Lap 3, Chris had worked his way back into the lead. As the cars began to settle into the long race ahead, the JD Classics E-Type continued to increase its lead over the rest of the field. With the safety car soon deployed due to an accident, the team took the decision to bring the E-Type in for the first of two mandatory three minute pit stops. With Chris handing the drive over to Alex Buncombe and with a changed front nearside tyre, the JD E-Type exited the pits to re-join the race in 20th place. However, within 12 laps Alex had fought the E-Type through the field to reclaim the lead. 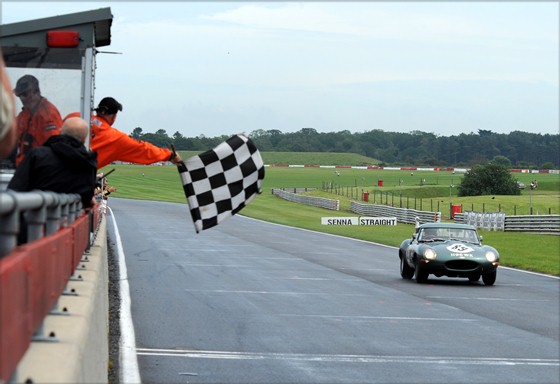 The JD Classics E-Type takes the chequered flag in an unrivalled victory in the 3-Hour Race.

By halfway through the race and as predicted, the heavens opened as the rain began to pound the circuit heavily. As the 2 hour mark approached, so the JD technicians bought Alex and the E-Type into the pits for the second of the compulsory pit stops. With Chris back behind the wheel and the car refuelled, the E-Type had built a sufficient enough lead to emerge from the pits maintaining the lead.

With 45 minutes remaining, the rain began to ease, however conditions remained treacherous with many a car falling victim to standing water and oil on the track. Despite the conditions hampering the JD E-type’s lap time, Chris Ward maintained a strong lead over the rest of the field. With the race entering its last 20 minutes, the JD Classics team took the decision to make a final driver changeover just before the pit lane window closed. As Chris came round to Murrays Corner to pit, the E-Type hit a patch of oil causing the car to spin 360 degrees however this was soon recovered and no damage was sustained. With Alex now back behind the wheel for the final 20 minute stint, he continued to maintain a comfortable lead to take the chequered flag on Lap 66, a clear 2 laps ahead of the hard charging Lotus Elan of Mark Halstead and Stuart McPherson which despite a good battle from the duo was pipped on the line to second place by an Austin Healey. 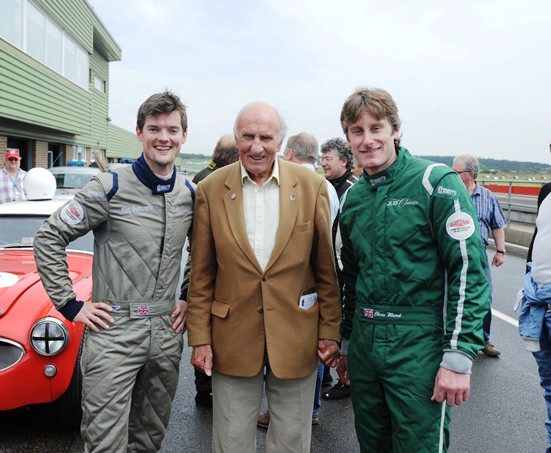 Having driven an unrivalled race and the only E-Type of the starting five to finish, the JD Classics Team were privileged to receive their award from the man that the race paid homage to – Jack Sears – who famously won the same race 50 years ago in equally challenging weather conditions.

With a well-earned victory for the Lightweight E-Type, the JD Classics Team now prepare for the World famous Le Mans Classic at the start of July.