Fresh from an impressive performance at Le Mans Classic at the start of July, JD Classics were invited to take part in this weekend’s Silverstone Classic with three of their most prominent historic racing cars in attendance; the 1959 Costin Lister, 1974 Ford Cologne Capri and 1954 Cooper T33.

With all three cars due to qualify on Friday, the Costin Lister was first to take to the track for the Stirling Moss Trophy session and with two victories on both of its competitive outings in 2014, the Lister and driver Chris Ward were hopeful of a third victory in as many races. With sunny and warm conditions throughout the 30 minute session, the JD Classics Lister performed well qualifying in third place amongst a vast field of 38 fellow pre-1961 sports cars.  Next to qualify was the Cooper T33 of Chris Ward and John Young and despite experiencing a slight braking issue, the Cooper drove to an unrivalled pole position ahead of Sunday’s RAC Woodcote Trophy race. With both the Lister and Cooper residing in Silverstone’s National Paddock, the JD racing team split themselves between there and the International Pits where the Ford Cologne Capri and its fellow Jet Super Touring Car Trophy field were being prepared for the weekend’s racing. Having already proved its dominance in 2014 at circuit’s including Donington, the Capri was driven by Steve Soper and John Young in the short 20 minute session. With both drivers having to complete 3 laps each within that time, the JD crew had to ensure that driver changeovers were completed as quickly as possible. Having run a smooth driver turnaround, the qualifying session ended with the Capri in a respectable 17th place. With all three cars having completed qualifying, the remainder of Friday allowed the team to prepare cars, calculate fuelling and rectify the Cooper’s braking issue ahead of race day on Saturday. 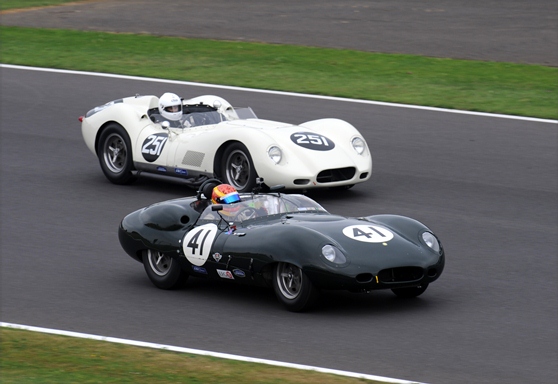 Another sunny, dry and warm day, Saturday morning saw the field of pre-1961 sports cars line up on the grid for the 60 minute Stirling Moss Trophy race. Having started from third on the grid, Chris Ward and the Lister almost immediately took second place from the Lotus 15 of McIntyre and McIntyre. Maintaining second position until the pit window opened, Chris and the Lister were required to pit and stop for 30 seconds before re-joining the race in 12th place. Despite losing 12 seconds on the front running Lister Knobbly of John Minshaw and Phil Keen and developing a misfire, Chris Ward began to power its way back through the field to come across the finish line in 2nd place - a well-deserved podium position for the ever consistent Costin Lister.

The first of two races, the Jet Super Touring Car Trophy saw the JD Classics Ford Cologne Capri up against a vast 41 car field of Super Tourers and Group A Touring Cars, however with Touring car veteran Steve Soper behind the wheel, the field were sure of a battle out of the Capri. Due to the marshalls gridding the car in the wrong position, the Capri lost six places before the start of the race. However, the car ran faultlessly with Steve Soper driving the car a clear 3 seconds faster than its qualifying time. Having made up the lost places, the Capri continued to work its way through the field to come across the finish line in 10th place overall and 1st within its class – a fantastic result for the Capri with many a more modern machinery in the Super Tourers to compete with. 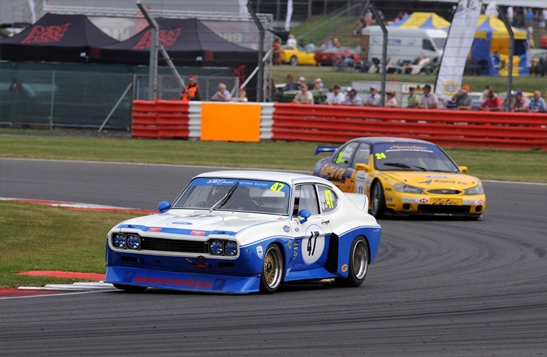 The Ford Cologne Capri was driven to a 1st in class by Touring Car veteran Steve Soper in the first of two Jet Super Touring Car Trophy races.

Lining up on pole position ahead of Sunday morning’s RAC Woodcote Trophy race, the Cooper T33 looked set for a dominant race. With John Young starting the two-driver race, the Cooper got off to a slow start losing two places off the start line, however holding a tight third place. As the pit window opened, cars began to enter the pits for mandatory driver changeover, however a driver error led the Cooper into the international pits (home to the Touring Cars) rather than the National paddock. Despite the confusion, John Young quickly exited the pits and returned the car to its rightful place where the team managed to recoup some of the lost time completing the fastest driver changeover of the field. With Chris Ward now in the driver’s seat and re-joining the race in 12th place, the Cooper continued to advance through the field and up into 4th place. However, a rear puncture forced an unscheduled pit stop which cost the Cooper a total of 55 seconds. Such a set-back did nothing to deter either car or driver re-joining the race to complete a succession of fastest lap times. By the time the chequered flag had fallen, the Cooper had climbed back up to 4th place a mere 1.5 seconds off a podium position, also finishing 3rd within its class. 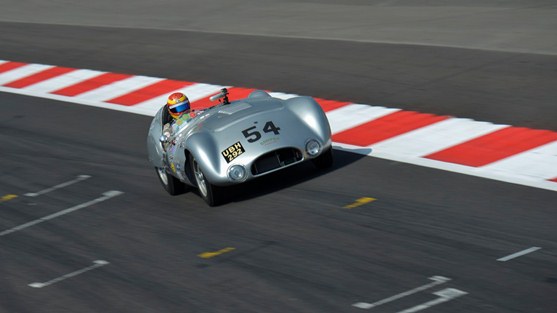 Having suffered a rear puncture, the Cooper T33 of John Young and Chris Ward powered their way to 4th place within the RAC Woodcote Trophy field.

Completing the weekend for JD Classics was the Ford Cologne Capri in the second of the Jet Super Touring Car Trophy races. Starting from 10th place and with John Young behind the wheel for the duration of the 60 minute race, a first lap tussle into a corner meant that the Capri had to take avoiding action by running wide and subsequently losing 5 places in the process. However, once the Capri had worked its way passed the traffic, John Young proceeded to produce consistently fast laps to drive the powerful Touring car to a 12th place overall and an unrivalled 1st in class.

JD Classics would like to send their deepest condolences to the family and friends of historic motor racing driver Denis Welch, who died at the weekend following an accident in the second Jack Brabham Memorial Trophy race at the Silverstone Classic.

The 69-year-old was an experienced racer, founder of a Healey specialist business and a very popular character at historic events. Derek Hood said: “We’ve all known Denis for such a long time; both in terms of a working relationship but more importantly as a friend. He always had time for us. From everyone at JD Classics, our hearts go out to his family at this very sad time.”