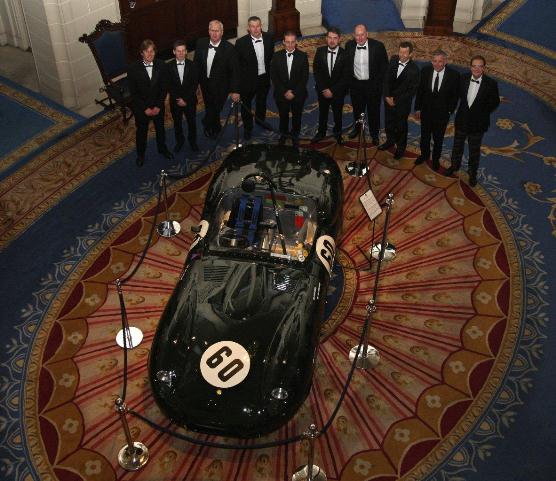 The JD Classics Racing Team pose alongside the 1959 Lister Costin which they powered to an unrivalled victory within this year's Stirling Moss Trophy series. (Photograph courtesy of Eddie McGuire)

On display in the club’s foyer was JD Classics’ 1959 Lister Costin which competed extensively throughout the 2013 Historic Racing Calendar at tracks including Donington, Spa Francorchamps and the Portugal based Autodromo Internacional do Algarve. A privilege to be chosen to appear on display, the JD Lister received further accolade throughout the evening’s proceedings not only being named winner of Class C6 but also receiving the coveted Stirling Moss Trophy for the series’ overall winner in 2013. Chris Ward, John Young, Andrew Smith and Alex Buncombe who drove the Lister to many unrivalled victories collected the prestigious accolade which was presented by Sir Stirling Moss himself.

Enjoying a similarly successful year was the JD Classics Touring cars of the ex-Tom Walkinshaw Jaguar XJS and Broadspeed Cologne Ford Capri. Having raced extensively in the JD Classics Challenge race series against a highly competitive field of contemporary Touring Cars, the JD cars both excelled with the Capri being named the JD Classics Challenge winner overall and victor of Class C3. The ex-Tom Walkinshaw XJS also received the accolade of winner of Class C1 as driven by Gary Pearson, Chris Ward, Alex Buncombe and John Young.

Having enjoyed an evening of automotive nostalgia, the JD Classics Team are now focused on the 2014 season, with the new Goodwood Road Racing Club Members Meeting at the end of March commencing the years historic racing calendar. JD Classics are also preparing cars for a host of other automotive events including the Mille Miglia, Le Mans, Laguna Seca and Goodwood.