With an extensive array of historic racing cars to choose from, the Le Mans Classic is fast becoming as popular as its sister 24 hour event. With places for the prestigious event highly sought after, JD Classics were pleased to be taking part in the event with not one but five of their most impressive classic racing cars comprising of Jaguar XK120s ‘LXO 126’ and ‘JWK 651’, Austin Healey 100S, Costin Lister and the 1952 ex-Fangio Jaguar C-Type which most recently clinched an unrivalled win at this year’s Monaco Historique.

With four of the five JD Classics entries (both XK120s, Austin Healey 100S and the C-Type) in Plateau 2, the team were optimistic of some competitive performances ahead of the 45 minute session. On the gruelling 13.63 kilometre circuit, Alex Buncombe and the Fangio C-Type were quick to make an impression, needing a mere 3 laps to achieve an easy pole and the only sub five minute lap out of the whole 80 car field. As the session progressed, the rain clouds moved in coating the circuit in a short sharp bout of rain. Despite being short lived, the precarious weather caught out a 1952 Allard J2 resulting in a red flag and the deployment of the safety car for the remainder of the session. In spite of this, the remaining three cars all qualified well with John Young placing the Austin Healey 100S in a strong 8th place with the Jaguar XK120 Ecurie Ecosse ‘LXO 126’ and ex-factory Works Competition car ‘JWK 651’ qualifying in 17th and 26th respectively. 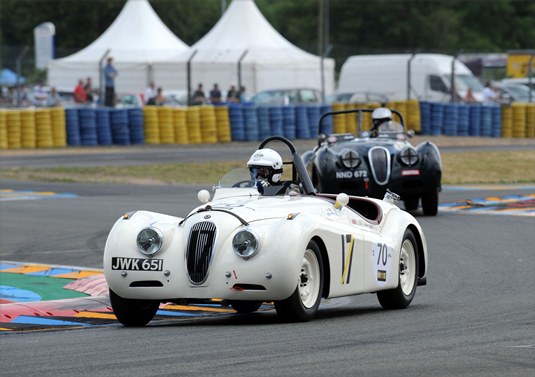 Competing in Plateau 3, the Costin Lister was next out to qualify. On their first competitive outing as a trio, Jeff Lotman, Donny Edwards and James Burke all drove the car consistently successfully completing the 45 minute qualifying session.

All five cars were scheduled to take part in Friday evening’s night practice sessions allowing drivers to get used to the track in the dark ahead of the weekend’s daunting night time race. With windy but warm conditions, both XK120s, Austin Healey 100S and the C-Type took to the track for Plateau 2’s 35 minute practice session. All cars performed well with Alex Buncombe setting a particularly impressive time of 5.07 and by the end of the session had put in a fastest lap time 21 seconds faster than the rest of the field. 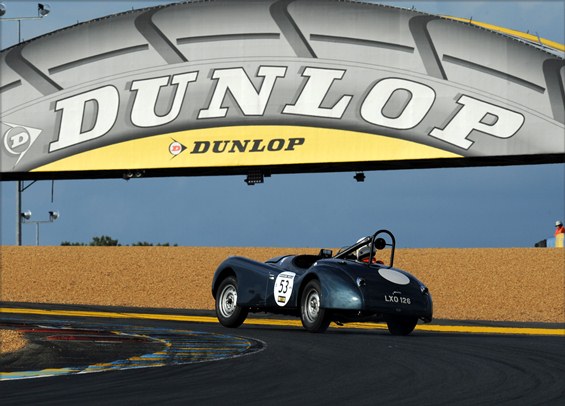 The Ecurie Ecosse XK120 of Jarrah Venables acheived an overall classification of 24th within Plateau 2.

Equally, the Costin Lister also put in an impressive performance within the Plateau 3 night time practice having run a total of 6 laps with a best recorded time of 5.25, a great achievement for all three drivers and their second attempt on the notoriously challenging Le Mans circuit.

With Saturday’s first race not until the evening, the JD team spent the day servicing and preparing the cars. With dry but very windy conditions, the four cars lined up on the grid for the first of three Plateau 2 races. In the traditional Le Mans start style, the field then re-grouped and came through for a rolling start. With Alex and the C-Type leading the field in pole position, he continued to make good his position and began to pull away from the rest of the field. Once the pit lane opened for mandatory pit stops, the C-Type came in for a flawless stop before continuing with its charge. John Young and the Austin Healey 100S had moved up into 3rd place and looked set for a podium position, however, a vibration within the car caused John to make an unscheduled pit stop. The car was checked and broken spokes were found in the front offside wheel due to earlier contact with another car. Nevertheless, the Healey rejoined the race to finish in 9th. Having run a steady race throughout, XK120 ‘JWK 651’ finished within the top half of the large field. XK120 ‘LXO 126’ also ran well until pushed by another car into the grass verge which subsequently ended the car’s race. 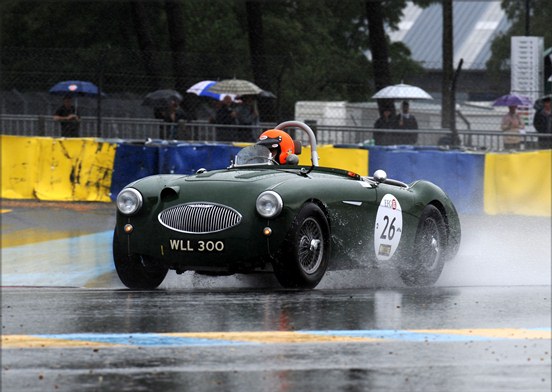 Having ran well all weekend, the Austin Healey 100S of John Young acheived a 4th place in the weekend's overall results for Plateau 2.

With the Costin Lister out on track soon after, Donny Edwards and Jeff Lotman drove a steady race despite being pushed offline by a slower car and into the gravel. With all cars having completed their first of three races, the team returned all five cars to the service area where they serviced and prepared the cars for Saturday’s night race.

By the time Plateau 2 took to the track at 3am on Sunday morning, the rain had begun to fall creating misty on track conditions for drivers. Due to the slippery conditions, the first lap of the race was once again behind the safety car. As the rain eased and the safety car exited the track, the field was led by pole sitting Alex Buncombe and the C-Type. Despite the very slippery conditions which the field had to contend with, Alex Buncombe still managed to pull away from the rest of the field to claim an unrivalled victory over 3 minutes ahead of the second placed Mercedes 300 SL. With the remaining three cars all finishing within the top 20 of the large field, including an impressive 6th place from the Austin Healey 100S, so the team turned their attention to the Costin Lister as the Plateau 3 field headed out onto the grid. With James Burke racing the Lister for the race’s entirety, he started from 21st place and, in spite of the treacherous conditions and it being his first outing on the Le Mans circuit in the dark, James drove the Lister to an impressive 11th place amongst the field of 75 cars. 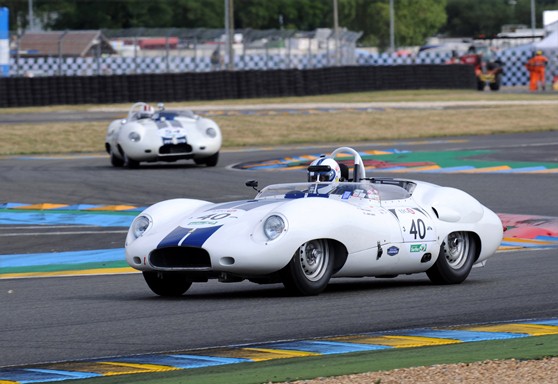 The Costin of Jeff Lotman, Donny Edwards and James Burke outshone its fellow Lister within Plateau 3.

Having successfully completed the night time races, the XK120s, Austin Healey and C-Type took to the track for the final Plateau 2 race on Sunday morning. As the cars prepared to exit the pits and head to the grid, the heavens opened as the circuit was battered by severe rain storms. With conditions considered too treacherous for a normal rolling start, the 45 minute race began behind the safety car. With the rain easing slightly within the first couple of laps, the safety car disappeared into the pits as the field was led by the JD Classics C-Type as they charged down the start/finish straight. With all four cars called in for their mandatory 1 minute pit stop, all returned to the track without any problems.

Despite the weather conditions having improved, visibility remained poor and the Jaguar C-Type and Alex Buncombe continued their charge, avoiding a large piece of debris which had fallen off a competing Lotus. Fortunately, thanks to the quick thinking action from Alex Buncombe, he managed to avoid damage to the car and an accident with another competitor in the process. 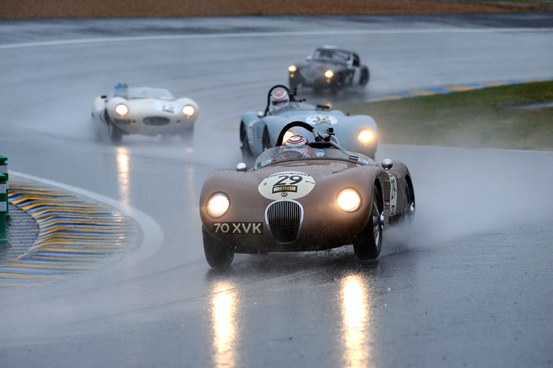 Alex Buncombe battled some precarious weather conditions to dominate Plateau 2 with a double victory in the ex-Fangio C-Type.

Having maintained a strong lead throughout the entirety of the race, a half shaft sheered in the rear axle on the final lap meaning that Alex Buncombe and the Jaguar C-Type were unable to claim what was set to be a triple victory. Despite a disappointing end to the weekend for the usually dominant C-Type, both the Austin Healey 100S of John Young and the XK120 ‘LXO 126’ of Jarrah Venables performed well both finishing the final race within the top ten. The XK120 ‘JWK 651’ of Derek Hood also performed consistently finishing within the top half of the field.

With both Plateau’s filled with a variety of highly competitive cars, all five JD Classics entered cars achieved impressive overall results for the weekend with the Austin Healey 100S and the Jaguar C-Type finishing in 4th and 5th place respectively. With both XK120 ‘JWK 651’ finishing in 16th and ‘LXO 126’ in 24th place, all four cars in Plateau 2 achieved total overall scores which ranked them well within the top half of the large field. On their first competitive event in the car, Jeff, James and Donny drove the Costin Lister to an overall result of 28th within Plateau 3.