Celebrating the golden era of motorsport, the Goodwood estate is catapulted back in time to the 1940s, 50s and 60s for the annual Goodwood Revival. A sell out event every year since its inauguration in 1998, this year’s event welcomed a crowd of in excess of 150,000 all adopting the weekend’s nostalgic theme in period appropriate attire.

With a record 6 cars running over the course of the weekend, JD Classics had an array of the best of what the golden era of motorsport had to offer. As Friday morning dawned, the circuit was doused in bright and sunny weather conditions. The 1957 Costin Lister was first out on track to qualify, however a 30 minute delay meant the Lister and its fellow Sussex Trophy competitors were late out on track. With both drivers (Chris Ward and John Young) required to put in a minimum of 3 laps each within the 30 minute session, driver changeovers were crucial. Fortunately, the JD Classics team performed such changeover seamlessly and within a field of 30 cars qualified in 5th place a mere two seconds off the pole sitting Ferrari 246S Dino. 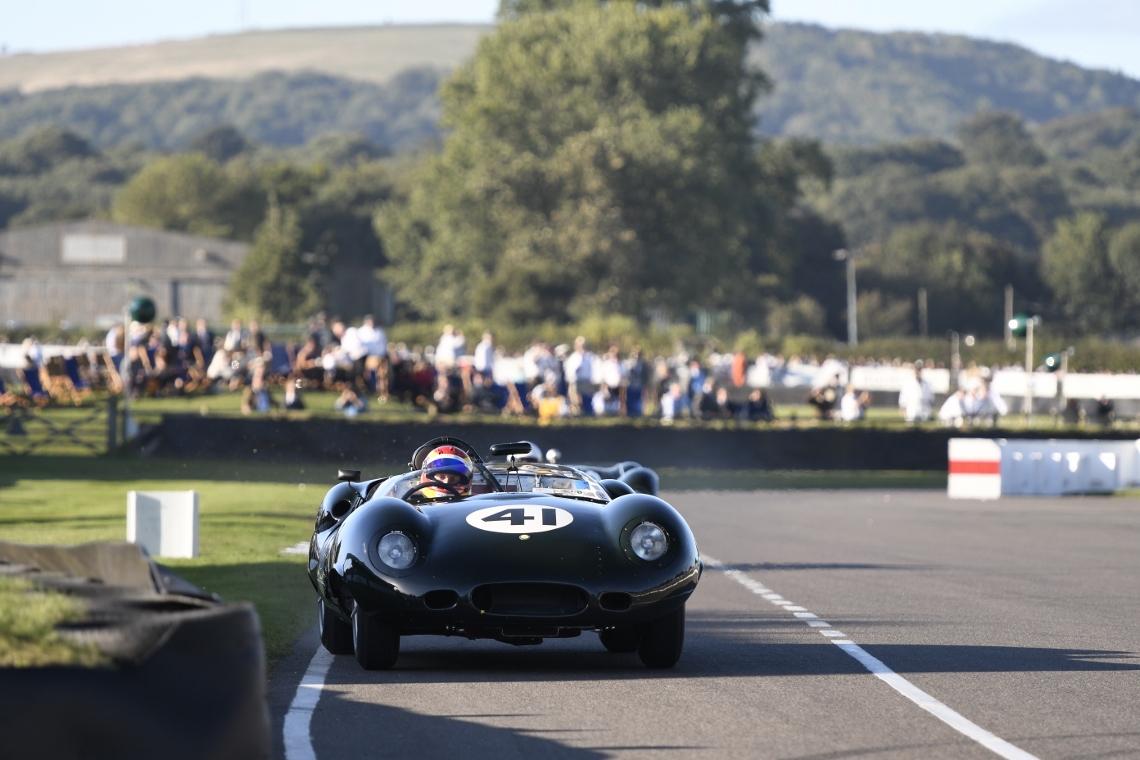 The Costin Lister of Chris Ward and John Young qualified in 5th place ahead of the weekend's Sussex Trophy.

Next to qualify was the 1955 Jaguar MK7 of JD Classics MD Derek Hood and motorsport presenter and journalist Amanda Stretton. With both drivers qualifying in separate sessions for the 2 part race, Amanda did so with an official Goodwood on board camera installed, giving a running commentary throughout her stint. Amongst a field of 28 fellow production saloons raced between 1950-1959, both Derek and Amanda ran consistently throughout the 30 minute qualifying session.

Celebrating the 60th anniversary of one of the British marque’s most revered models, this year’s Lavant Cup paid homage to the Jaguar D-Type. With both the JD Classics 1955 D-Type and 1957 Jaguar XKSS (one of the original 16 built by Jaguar from a D-Type chassis and converted to a road car by the Jaguar factory) the team were hoping for a good performance within the celebratory race. Amongst a field of 19 competitors, John Young qualified the D-Type to a competitive third place on the grid. The XKSS of Derek Hood also ran consistently throughout the 30 minute session. 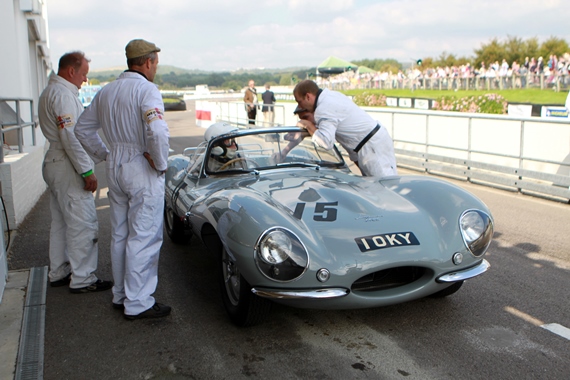 Completing the six car line-up, the 1954 Cooper T33 was the last of the JD Classics entries competing in the weekend’s Freddie March Memorial Trophy race, which Derek Hood qualified within the top half of the 30 car field.

With all 6 cars now qualified, the JD Classics team checked them over and readied them for the weekend’s races which started with Friday’s 60 minute Sussex Trophy night race. With JD Classics old hands Chris Ward and John Young behind the wheel of the Costin Lister, the team were hoping for a flying start to the weekend’s racing action. After an exciting dice with the Lister Chevrolet of Andrew Smith for third place, the night time conditions failed to deter the powerful 1959 Lister as it charged its way to an impressive 4th place a mere 2 seconds behind the Lister Chevrolet. 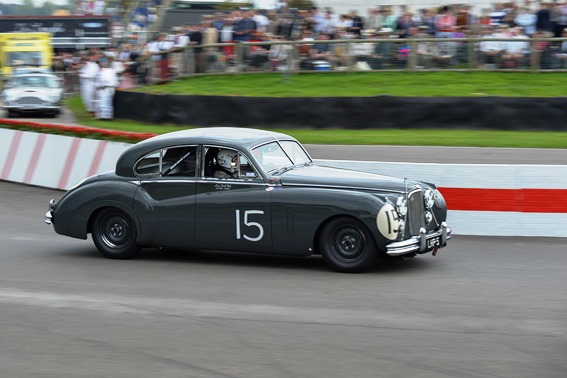 The Jaguar MK7 of Derek Hood and Amanda Stretton performed consistently throughout the weekend.

As another day of dry and sunny conditions dawned on Saturday, the JD Classics team prepared Amanda and the MK7 for the first of the two race St Mary’s Trophy. The only female of the field certainly made her mark driving the field’s largest car to finish the race in a respectable 17th position.

Saturday early evening saw the JD Classics D-Type of John Young and the Jaguar XKSS of Derek Hood take to the track for the special commemorative Lavant Cup race. Starting from 3rd on the grid, the D-Type quickly moved its way up to 2nd place and was in hot pursuit of the front running car when it caught an oil patch on the track causing the D-Type to spin. Quickly recovered by John Young, the JD Classics car was now in 11th place. Despite the set-back, John Young fought the D-Type back through the field to finish the race in 5th place. The XKSS, fresh from its concours win at this year’s prestigious The Quail event during Monterey Classic Car week, also ran a steady race finishing as the fastest and highest ranking XKSS of the field. 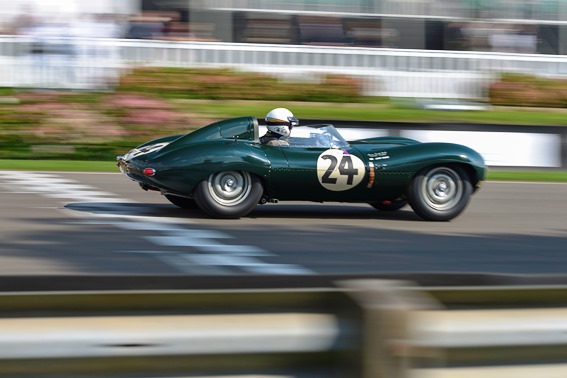 The Jaguar D-Type of John Young recovered from an early spin to finish in 6th place within the Lavant Cup.

As darkness began to draw in over Goodwood, the extensive field of sports-racing prototypes took to the track for the Whitsun Trophy for what looked set to be a high octane 25 minute race. Sitting in 2nd place on the grid, the JD Classics Lola Chevrolet T70 Spyder of Andrew Smith stole the lead off the start line and remained in a tussle until the pole sitting McLaren Chevrolet regained the lead. Needless to say, the Lola responded by closing back in on the front runner which made for some exciting watching. As the Lola got caught up in traffic mid race, the 3rd placed Huffaker-Chevrolet Genie MK8 began to close in and in an ill-judged move subsequently clipped the Lola causing both cars to spin off course. Fortunately, the quick action of driver Andrew Smith meant that the Lola was soon back in the race in 6th place with the offending Huffaker-Chevrolet incurring a penalty for the incident. Despite this, Andrew Smith maintained position to finish respectably in 6th place. 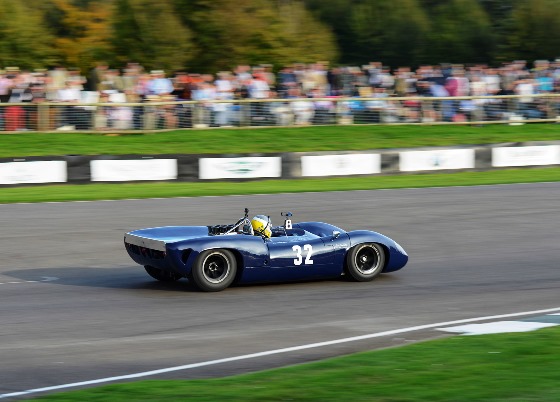 The Lola Chevrolet T70 Spyder ran well despite being taken off by a fellow competitor to finish the Whitsun Trophy race in 6th place.

With a succession of good weather, Sunday followed suit with on-track action commencing under dry and bright conditions. In the second of the two round St Mary’s Trophy race, the Jaguar MK7 once again returned to the track this time with JD Classics MD Derek Hood behind the wheel for the duration of the race. Having run faultlessly all weekend, the MK7 successfully completed another unswerving race. 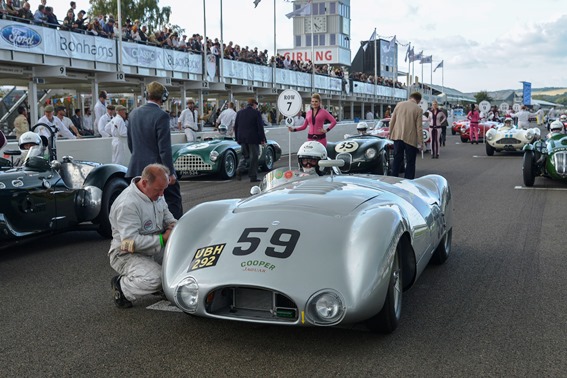 The 1954 Cooper T33 of Derek Hood takes its place on the grid ahead of Sunday's Freddie March Memorial Trophy race.

The final race of the weekend was the long standing Freddie March Memorial Trophy and with the Cooper sitting mid field on the grid, competition was looking fierce amongst the field of Austin Healey’s, C-Type’s and various other cars ‘in the spirit of the Goodwood 9-Hour Races, 1952-1955’. With light dwindling in the early evening conditions, the Cooper T33 of Derek Hood maintained a strong drive to complete the race in 14th place.