Having played host to many a familiar face within the motorsport world, JD Classics were privileged to welcome back Sir Stirling Moss OBE as our guest speaker to our final breakfast morning of 2014. With previous breakfast morning’s playing host to crowds not far off the 1000 mark, the event was hosted as invitation only with just 350 guests in attendance. Needless to say when news of Sir Stirling’s presence was announced, the demand was nothing short of staggering! 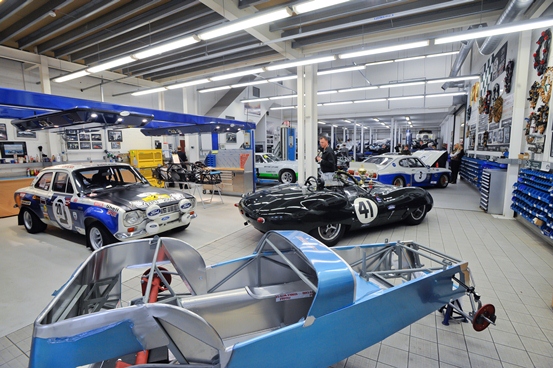 Our guests got a behind the scenes look at the work that goes in to preparing and maintaining our concours and race winning historic cars.

A cold November morning did nothing to deter our guests with crowds gathering in anticipation outside the illusive green gates eager to take in the sights on offer across vast seven showrooms as well as getting to view the work that goes on behind the scenes in our competition, engine, bodywork and main workshop departments with many of the in-house technicians on hand to answer questions and share the knowledge of their expertise.

At 10.30am sharp and with compare Simon Taylor, Sir Stirling took to the stage in the main workshop to rapturous applause from a heaving crowd. “You can ask Stirling anything about his racing and his crumpet!” announced Simon Taylor at the beginning of the Q&A session, a quip of which was met with instantaneous laughter from the audience. 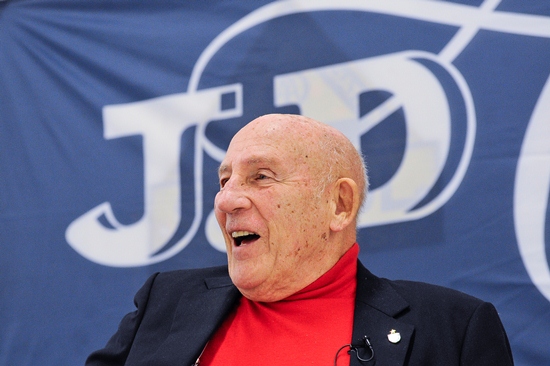 Sir Stirling Moss talked candidly and with humour about his long and influential career in motorsport.

Stirling shared many anecdotes and stories from his illustrious career including his memorable win at the 1958 Argentine Grand Prix in Rob Walker’s compact Cooper Climax, claiming an impressive victory despite competing against some much more powerful factory Ferraris. Stirling also competed the duration of the race without a tyre change reducing the tread down so far that they could have mistaken for slicks, but as Sir Stirling admitted himself: “As they say what’s the difference between stupidity and bravery – not much!”, a mantra of which can be accredited to his unrivalled driving skill and subsequent reputation as the greatest racing driver in the sport’s history. 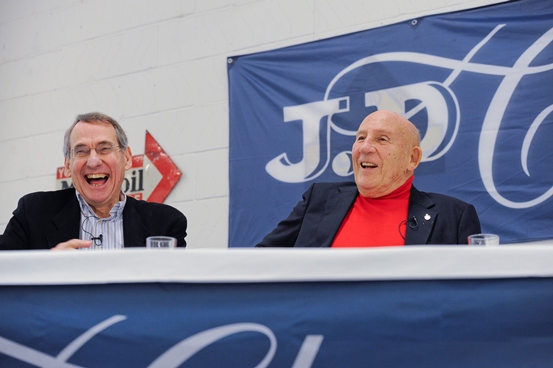 Having entertained a captivated crowd for the best part of an hour and a half with stories from one of the most influential careers in motorsport history, Sir Stirling then took the time to pose for photographs and chat with a vast queue of fans (including many of the JD staff!)

Throughout the morning, volunteers from Hope for Tomorrow, a charity which provides mobile chemotherapy units for rural areas and of which Sir Stirling is a patron, collected donations. Also invited was The Meningitis Research Foundation, a cause of which is close to the heart of JD Classics. Thanks to the generosity of our guests, both charities raised a lot of money and awareness for two very worthwhile causes. 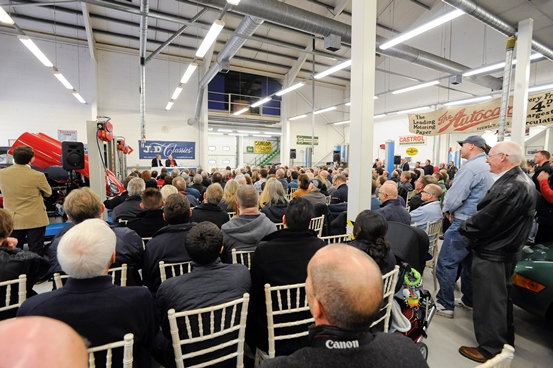 Our guests flocked to the main workshop in their droves to hear Sir Stirling Moss talk.

With another successful breakfast morning complete, JD Classics have now closed their gates for the year but look forward to welcoming many of our loyal supporters, customers and fellow classic car enthusiasts back to JD Classics in 2015.