Following on from a successful weekend’s racing at the Goodwood Revival, the JD Classics Historic Racing Team made the pilgrimage to the famous Spa Francorchamps circuit for this year’s Spa Six Hours Meeting.  In one of its largest turnouts to date, a staggering 600 vehicles participated with a variety of Sports, GT and Saloon Cars in attendance.

Friday’s qualifying sessions looked set to be more challenging than usual due to the less than ideal weather conditions as a mist descended leaving the track damp. The XJS of Andrew Smith and John Young and Cologne Capri of Chris Ward and Gary Pearson took to the track first as qualifying began amongst a 75 car field. Despite a highly competitive field of high powered Touring Cars, both JD cars qualified well with the Capri and XJS achieving 2nd and 3rd place on the grid respectively. 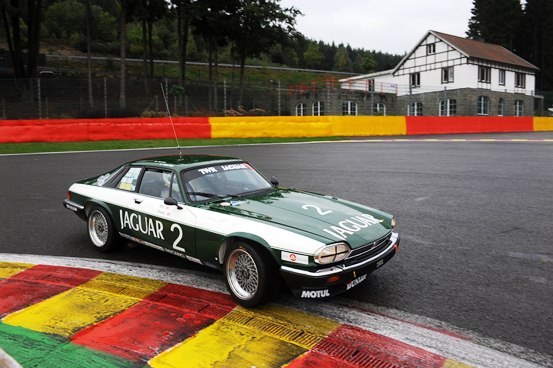 The Tom Walkinshaw XJS of Andrew Smith and John Young qualified in an impressive 3rd place amongst a large field.

Friday lunchtime saw both the Cooper and Lister take to the grid to qualify for the combined Stirling Moss and Woodcote Trophy Race. Due to the combined round set-up, the field consisted of a sizeable 62 car group which, much like the Touring Cars meant that the level of competition was exceptional. Taking to the Lister first, Chris Ward set the early pace out on the wet track by nearly six seconds. By driver changeovers, Chris bought the car in to hand the drive to John Young who maintained a consistent session to place the Costin Lister in 5th place. Having handed over the Lister drive, Chris waited to take the second qualifying stint in the Cooper from Andrew Smith and with the ever improving track conditions the Cooper was driven by Chris Ward and Andrew Smith to pole position within the Woodcote Trophy grouping and 9th overall.

With both qualifying sessions now complete, the cars returned to the JD garage where they were checked and readied for the weekend’s upcoming races. 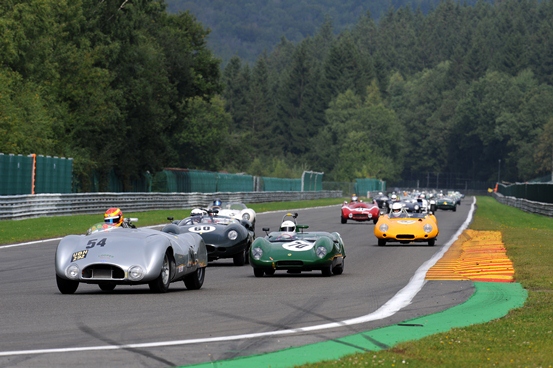 The JD Classics Cooper Jaguar T33 driving to a victory within the Woodcote Trophy field.

Once Saturday morning had dawned, the weather and track remained dry ahead of the 61 minute long Stirling Moss and Woodcote Trophy Race. Lining up on the grid ahead of the start of the race and with Chris Ward starting in the Cooper and John Young in the Lister, the race looked set to be a thrilling one as the grid commenced their charge around the 7km long circuit. With both cars maintaining strong positions throughout the first half of the race, Chris and the Cooper were bought in first, handing the drive over to Andrew, a driver changeover which was achieved smoothly in 37 seconds making it the fastest of the race. As Andrew returned to the track maintaining the car’s competitive pace, Chris Ward had little time to spare as John Young entered the pits on the following lap to hand the Lister drive to Chris. With John having improved the Lister’s lap times, Chris took to the track and began to work his way through the field. A succession of pit stop errors from rival team’s and the ever increasing pace of the Lister saw Chris take the lead which he extended to an 18 second gap by the time the chequered flag fell, seeing the Lister not only take victory within the Stirling Moss Trophy field but also in the combined overall field. Not to be outdone by its fellow JD car, the Cooper Jaguar also drove a sterling race taking 1st place within the Woodcote Trophy field and finishing in 4th position overall thus signalling the end of a successful race day for the JD Classics Historic Racing Team. 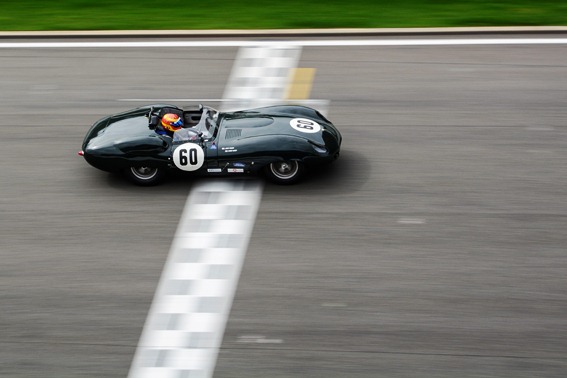 A well-deserved victory for the JD Costin Lister within the combined Stirling Moss/Woodcote Trophy Race.

As the weekend’s signature race, the Six Hour Race got underway on Saturday evening, the JD Classics team were busy preparing the two team Touring Cars ahead of Sunday morning’s race.

An early start for the team with the GT and Saloon Challenge the first race of the day, the weather remained dry but misty. With both cars set up on dry tyres, the team were hopeful that the rain would continue to hold off. However, in true Spa style and as the cars made it out onto the grid, so the heavens opened and the light rain started to dampen the track. With the weather conditions looking set to deteriorate, Chris Ward brought the Capri into the pits to make a last minute tyre change to wets, this last minute stop losing the Capri its position on the grid to start from the pit lane and the back of the grid. The JD XJS of Andrew Smith opted to stay on the dry tyres. 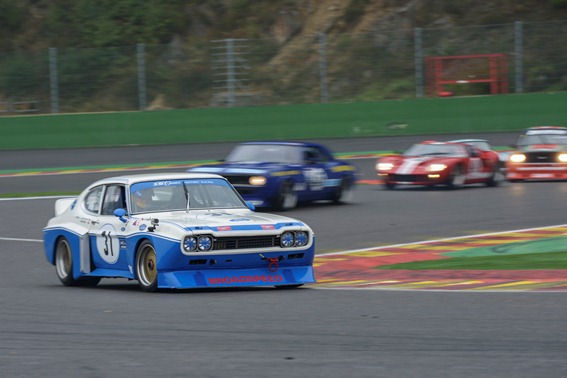 The Broadspeed Cologne Capri of Chris Ward and Gary Pearson drove an impressive race to finish 5th overall and 1st in its class.

As the race got underway and the 70 car strong pack of roaring Touring Cars ascended the gruelling Eau Rouge climb, the weather conditions began to deteriorate further and as the rain worsened, Andrew bought the XJS in at the end of Lap 2 to change to wet tyres. Meanwhile, the late tyre change appeared to be paying off for the Capri as Chris Ward made an unstoppable charge through the field before coming into the pits to hand the drive over to Gary Pearson with John Young driving the second stint in the XJS. With both cars remaining on wet tyres on the now increasingly dry track, the Capri and XJS were at risk of the wet tyres potentially overheating. However, driver skill prevailed as the Capri finished in 5th position overall and 1st in class. The XJS also ran a solid race having finished 3rd in its class and 28th within the extensive 70 car field, so marking the end of another successful weekend of racing for the JD Classics Racing Team at the notoriously challenging Spa Francorchamps circuit.