This weekend saw the 23rd annual Silverstone Classic meeting taking place with a mammoth 1000 classic race cars taking to the track during the two day bonanza. With a wide spectrum of the sports most recognised and famed cars taking part, the weekend was set to be a treat for any classic car enthusiast. As with years past, this year’s Silverstone Classic celebrated some special anniversaries of some of the sports most recognised and much loved marques and models including Lamborghini, Aston Martin and the much beloved Porsche 911 which, in dedication to the car’s half centurion, took to the track as a 911 car strong parade.

JD Classics were once again in attendance taking part in the Motor Racing Legends races: the JD Jaguar C-Type and Cooper T33 in the Woodcote Trophy and Costin Lister and Austin Healey 100S in the Stirling Moss Trophy.

Residing in Silverstone’s national pits, the JD Costin Lister and Austin Healey took to the track as Friday morning’s qualifying session for the Stirling Moss Trophy got underway. Due to the team evaluating new settings on the car, the Lister qualified in 11th place; however the team were confident that the car would deliver on race day. The Austin Healey found itself up against a field of more powerful cars due to its engine size and disc brakes, meaning that the car qualified in the lower half of the grid. Despite this, the JD Healey silenced its critics being named the fastest of its marque over the entire weekend. 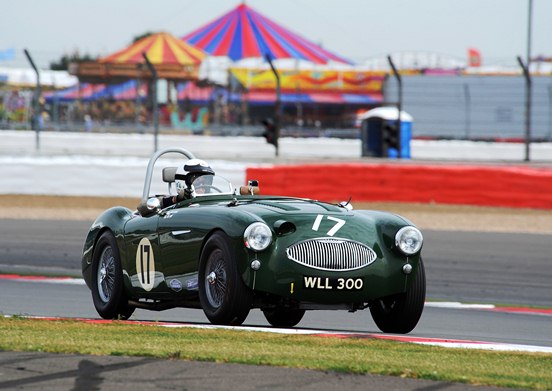 As soon as the session was complete, the JD crew turned their attention to the pending Woodcote Trophy qualifying session as both the C-Type and Cooper took to the track. With the combined experience of drivers John Young, Chris Ward and Andrew Smith, qualifying went well with the C-Type sitting pretty in 2nd place on the grid just ahead of the 3rd placed Cooper. 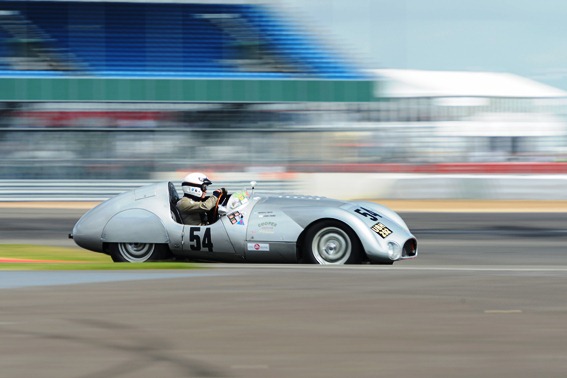 Once Friday’s qualifying sessions were complete, the JD Classics crew went to work preparing and checking over all vehicles ahead of the weekend’s races. Whilst preparing the Costin Lister, the JD team were treated to a visit from Ken Hazelwood, Dick Barton and Colin Crisp who all worked for Brian Lister in period, with Ken and Dick having actually built the JD Lister back in 1959. “Young” Ken, as he is referred to, who is now 93 years old exchanged stories with his two fellow technicians as they admired the car they built some 54 years ago. 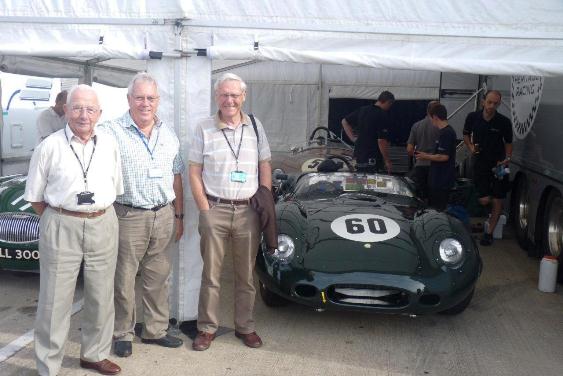 (L-R) Ken Hazelwood, Colin Crsip and Dick Barton with the JD Costin Lister which they helped immortalise over 50 years ago

With the sun beating down and the crowds flocking in their thousands, the Stirling Moss Trophy race took place early Saturday  morning as the JD Lister of Chris Ward and Andrew Smith and the Austin Healey of John Young and Wil Arif took their positions on the grid. As the race got underway, the Lister true to form started to pick off its contemporaries as it worked its way through the field. The Austin Healey was also holding its own further down the field. With both driver changeovers running smoothly, the Lister returned to the track to continue its quest to get to the front of the pack. By the time the chequered flag had fallen, the Lister had fought its way up to 2nd place, a mere two seconds behind the winning Lotus 15. Unfortunately a transmission glitch on the last lap denied the Austin Healey of a place in the top ten but it still finished the highest placed and fastest Healey of the weekend. 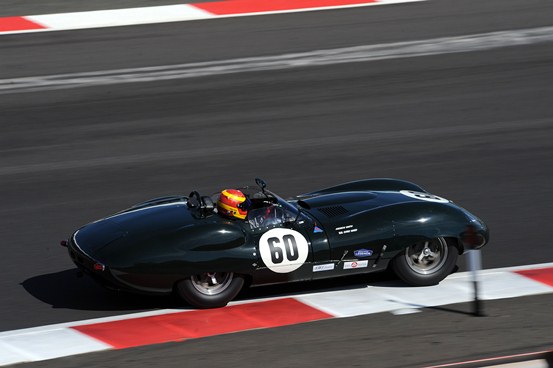 Sunday also provided nice weather as the large droves of spectators filled the grandstands and set up camp for yet another day of high powered classic racing. The C-Type and Cooper took their places on the grid ahead of Sunday morning’s Woodcote Trophy race, both sitting just behind the pole sitting D-Type of Gary and John Pearson. The large grid was ready to lead into battle as the lights turned green ahead of what looked set to be an exciting 60 minute race. As the race entered the last 20 minutes, it was clear that a real battle was on as the Cooper edged ahead of the front running D-Type but it was the drum braked C-Type with Chris Ward at the wheel that was making stunning progress through the field. Having regained the lead from the Cooper, the D-Type faced further pressure from the JD team as Chris and the C-Type was hot on its heels. Soon after, the C-Type moved up into 2nd place having gained on the D-Type with every lap. With it looking like the JD car would steal the victory at the last minute, the chequered flag fell and the car settled for an exceptional 2nd place a mere 4 hundredths of a second behind the D-Type with the Cooper not far behind. 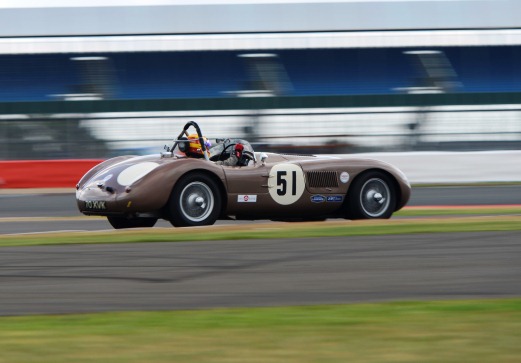 As the weekend came to a close and the crowds dispersed, the team took stock of yet another successful weekend for JD Classics as the C-Type, Cooper and Costin Lister all came away with podium positions with the Jaguar C-Type and Costin Lister being class winner aswell. This together with the Austin Healey being named as the fastest Healey of the entire weekend proved to be a great weekend’s work from JD Classics and its team of specialist technicians.