Opening the week’s revelries was the annual Rolex Monterey Motorsports Pre-Reunion. Held at the Mazda Raceway Laguna Seca, the Pre-Reunion takes place the week before the main Reunion event and in previous years has remained a closed event. However, this year’s Pre-Reunion was opened to the public for the first time in its history, allowing spectators to enjoy some historic motor racing action in a more relaxed and spacious atmosphere. Another advantage is that it allows Reunion entrants a chance to familiarise themselves with the gruelling terrain of the technically challenging Laguna Seca circuit with this year approximately 300 of the 550 reunion entrants taking advantage of the track time.

Having signed on and completed tech checks on the Friday, the JD Classics team were eager to get out onto the track and take full advantage of some practice time on the notorious circuit. 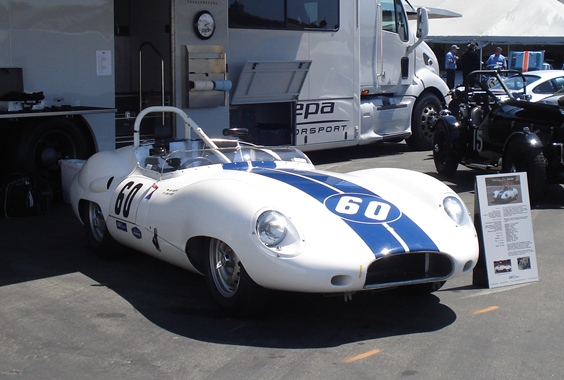 The ex-Cunningham Costin Lister being prepared ahead of action.

Taking part at this year’s Pre-Reunion event was the 1959 Jaguar Lister which was prepared and maintained by JD Classics specialist race crew. Having raced in period and more recently at tracks including Daytona, Spa Francorchamps and Le Mans, BHL 123 as the car is commonly known has also raced at Laguna Seca, having taken part in 2010’s edition of the Monterey Reunion. BHL 123 was captained at Laguna this year by American driver Bruce Canepa who, together with British driver Alex Buncombe, drove the Lister to 1st and 2nd podium places respectively in 2010.

Bruce and the Lister took to the Laguna circuit for Friday’s qualifying session, qualifying in an impressive 4th position ahead of Saturday’s 1955-1961 Sports Racing Cars race.

Lining up on the grid on Saturday afternoon behind the pole sitting Chevrolet Lister of Erikson Shirley, the field sprang into action as the 20 minute race got underway. Despite his best efforts to maintain a strong chase on the pole sitter, Bruce Canepa and the JD Lister couldn’t quite manage to catch the Chevrolet Lister. Despite this, BHL 123 came across the chequered flag in a solid 2nd position.

Similarly to the previous day, Sunday afternoon’s race remained a two car battle at the front of the field as Bruce and the Lister this time got the advantage over the Chevrolet, stealing the lead from the first corner onwards. This remained the case throughout the entirety of the race as Bruce maintained a two and a half second lead over his race rival to take a well-deserved victory for the JD Classics team. 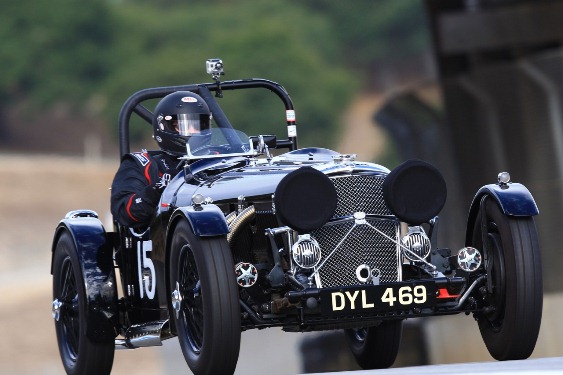 The ex-Bob Truett SS100 ran consistently throughout the weekend.

Also participating in the weekend’s Pre-Reunion festivities was the 1937 Jaguar SS100. Previously owned by JD Classics, the ex-Bob Truett Jaguar was raced by its current owner, an American customer and run by Bruce Canepa’s team of classic racing car specialists, running consistently throughout the weekend.

With the Pre-Reunion weekend complete and with two podium positions under their belt once more, the JD race crew got to work preparing the Costin Lister ahead of the following weekend’s Reunion meeting.

Celebrating its 60th birthday, at the heart of the festivities at this year’s Rolex Monterey Motorsports Reunion was the Chevrolet Corvette. First debuted at the 1953 Motorama Auto Show in New York, this all American sports car was honoured as a display from six generations was put on prime display in Laguna’s race paddock.

With a large entrant list of 550 cars, the Reunion cements its reputation as one of the World’s biggest and best classic racing car events. Many a familiar face was also in attendance including three times Formula One Champion Sir Jackie Stewart who, as an honorary guest entertained a large crowd at the Yamaha Marketplace answering questions alongside Corvette Racing Team’s Tommy Milner as they exchanged stories from their varied racing careers.

Looking forward to another weekend of high octane on-track action, the Costin Lister took to the circuit once more as it lined up on the grid ahead of the Group 7A Rolex Race – 1955-1961 Sports Racing Cars over 2000cc amongst a field of Maserati’s Aston Martin’s and Lola’s. Despite being amongst a highly competitive field of its contemporaries, the Lister held its own over the weekend, knocking over 20 seconds off its lap time. An incredible coup for our customer in his debut drive behind the wheel of the powerful 500 horse powered Lister.

Also participating at the reunion was the ex-JD Classics SS100 which also performed solidly throughout the Reunion weekend finishing in a respectable 9th out of an 18 car field.