The 41st edition of the World famous Oldtimer Grand Prix took place last weekend (9-11th August) at the infamous Nurburgring. One of the most popular classic car events in the World, the Oldtimer Grand Prix this year played host to a variety of over 600 classic cars over the three day, 11 race extravaganza. Petrol heads also got to enjoy a wide variety of period and vintage examples on static display throughout the Nurburgring’s vast area.

Always regulars at such classic car events, the Oldtimer was no exception as Jaguar Heritage Racing entered three of their most impressive period racing examples and, with the support, maintenance and preparation carried out by JD Classics, Jaguar Heritage Racing took to the Nurburgring in a bid to add to their ever expanding trophy cabinet with three impressive Jaguar examples in the form of a C and E-Type and MK2. 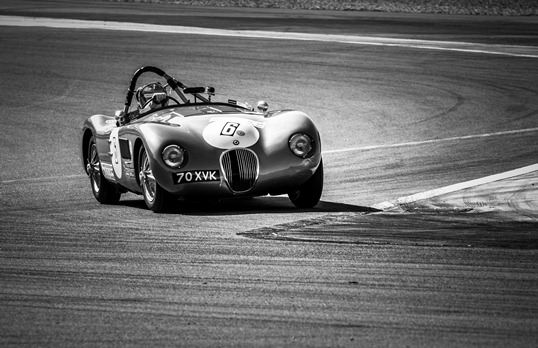 Alex Buncombe driving the ex-Fangio C-Type to a podium position in the 2-seater GT race.

On-track action began early on Friday morning, with both the Jaguar MK 2 and C-Type qualifying at similar times. With the C-Type on the Grand Prix circuit and the MK2 on the longer Nordschleife track, so the JD Classics crew had to strategize, making sure that all drivers took to the track for the allotted qualifying time. Despite the potential problems that the situation posed, qualifying ran smoothly with the MK2 performing well, qualifying 18th out of a vast field of 44 cars. The ex-Fangio C-Type also impressed as Alex Buncombe drove to an impressive 2nd place on the grid ahead of Saturday’s race. Similarly, and with Alex behind the wheel once more, the JD E-Type stormed a highly competitive qualifying session to steal pole position from its rivals within the Gentlemen Drivers Race field. 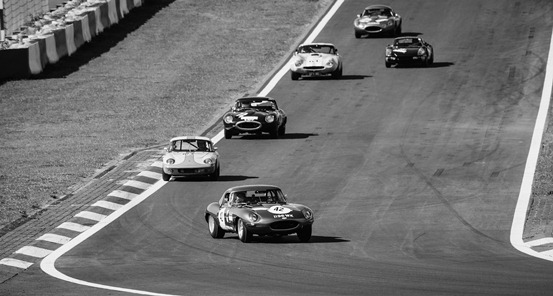 The Lightweight Jaguar Heritage Racing E-Type storming its way to an unrivalled victory, having started the race from the back of the field.

Despite a successful qualifying session for all three cars, the team had little time to catch their breath as they prepared the MK2 for Friday afternoon’s marathon race. Totalling 3 ½ hours in length, the marathon drive was shared by driving trio Alex Buncombe, former Le Mans winning racing driver Andy Wallace and motorsport journalist Roland Lowisch. Lining up on the grid amongst some much more powerful cars, both Andy Wallace and Alex Buncombe drove the Jaguar Heritage MK2 into a strong position as the final drive was passed on to Roland Lowisch who maintained the car’s consistent performance. Roland and the MK2 began to put increasing pressure on the 2nd classed Mustang throughout the final stages of the race; however a spin from the Mustang on the final lap meant the MK2 racer had to take to the grass in order to avoid the incident. Unfortunately, the Mustang was able to make a quicker recovery as the MK2’s avoidance measures resulted in flat spotted tyres. Despite this, Roland recovered well from the set back to finish a solid third in its class. 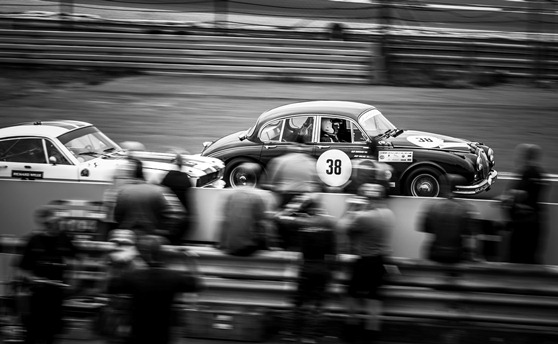 The MK2 Racer tussling with a Mustang on the challenging Nordschleife track during the gruelling marathon race.

Specifically for period GT race cars built before 1965, the Gentlemen Drivers Race took place on Saturday morning with the E-Type of Alex Buncombe having qualified on pole position. However, an official’s error meant that the Heritage E-Type was forced to start the race from the pits which subsequently forfeited pole position. Nevertheless, Alex Buncombe remained unfazed as he stormed the back running lightweight E-Type through the 20 car field, claiming an unrivalled victory for the Jaguar Heritage Racing team. 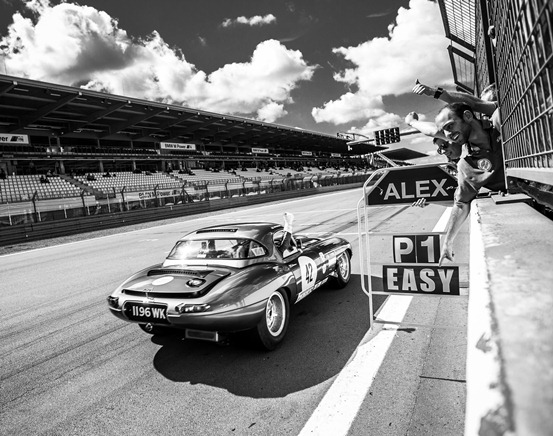 The JD crew celebrate another fantastic win as Alex Buncombe takes a clear victory in the Gentlemen Drivers Race.

The final race of the day, Saturday evening’s 2-seater GT race saw the Heritage C-Type take to the track in the first of what was to be a two race round. Fresh from his previous victory, Alex Buncombe was to captain the ex-Fangio C-Type which sat on the front row of the grid behind the pole sitting Ferrari 250GT of Maximillian Werner. Having maintained a competitive position throughout the entirety of the 65 minute race and with mandatory pit stops completed efficiently, the Jaguar Heritage entered C-Type came passed the chequered flag in 2nd place, gaining another podium position and marking the end of another successful day at Nurburgring for Jaguar Heritage Racing and JD Classics. Once the JD crew had done some routine post-race checks, the C-Type was tucked away in preparation for the second 2-seater GT Race. 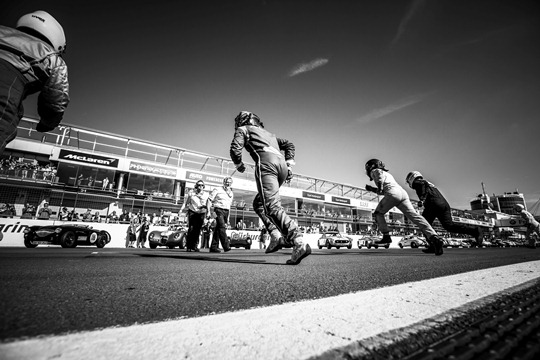 Sunday morning's second 2-seater GT Race began with a traditional Le Mans start, much to the delight of the crowds.

Sunday morning attracted a large crowd as the fine weather doused the vast Nurburgring. A 30 minute spectacle this time, the race began with a special period Le Mans start much to the delight of the brimming grandstands of spectators. Once underway, the race very much remained a three car battle with the pole sitting Ferrari 250GT, the Jaguar Heritage Racing C-Type of Alex Buncombe and the third places Lotus 11 vying for victory as they raced their way around the Grand Prix circuit. The charge of the pole sitting Ferrari was, however short lived after a technical problem led to its retirement, with Alex Buncombe now leading the 40 car pack. Throughout the remainder of the race, the tussle for the lead became a heated one as the Lotus 11 applied the pressure; Alex however remained unfazed by the Lotus’ charge as the JD Classics prepared C-Type took the chequered flag to claim victory a full 28 seconds ahead of the second placed car. 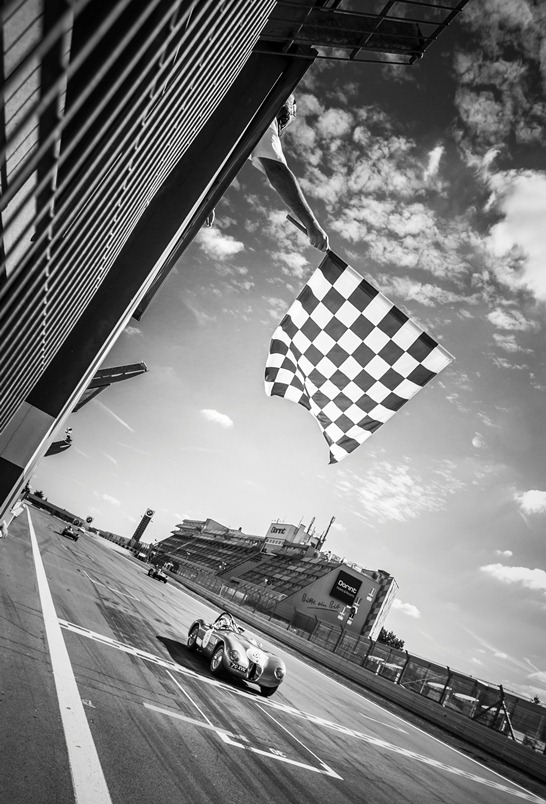 The C-Type crosses the finish line to take the chequered flag and another win for Jaguar Heritage Racing.

Debuting their upcoming hybrid C-X75 supercar at Nurburgring, both the Jaguar Heritage C and E-Type were also invited to appear with their trophies and victory garlands on static display within the Jaguar hospitality zone, emphasising the evolution of Jaguar throughout the years in comparison to its new ecologically friendly contemporary. 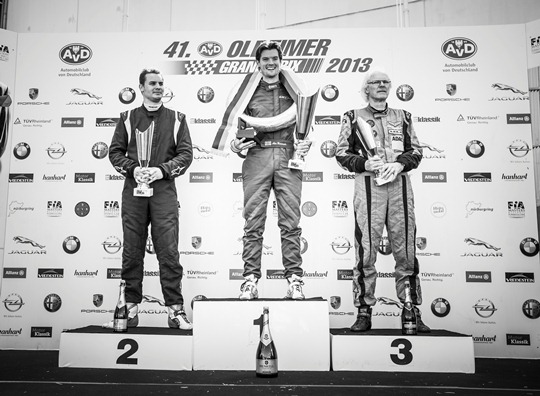 With the support of JD Classics’ Racing Department, Jaguar Heritage Racing collated a fantastic collection of results from this year’s Oldtimer Grand Prix including two victories and numerous podium positions and class wins. Having made a successful return to Nurburgring after their debut last year, JD Classics hope to join forces once more with Jaguar to return for another successful weekend of racing in 2014.