Having enjoyed a season of dominating race performances at many of the World’s most prestigious historic events, JD Classics were honoured to be named Class 1C winners in 2012’s JD Classics Challenge race series. This coveted accolade was awarded to our very special Jaguar TWR XJS and collected by Gary Pearson and Alex Buncombe whom, alongside Chris Ward collectively drove the car to its class win.

Launched in 2011, the JD Classics Challenge features a rich variety of Group 1 and 2, and Group A Touring Cars which competed in both British and European Touring Car Championships between 1972 and 1985. 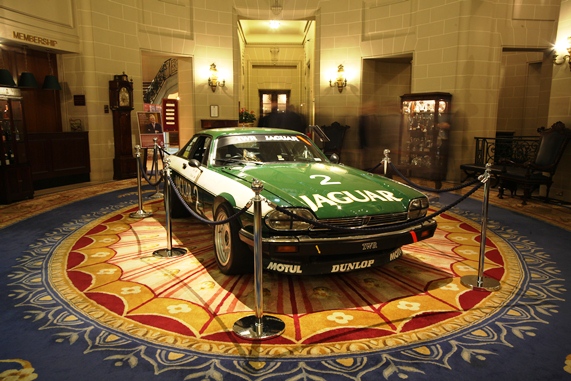 The JD Classics Challenge class winning TWR XJS on display in the lobby of the RAC Club in London's Pall Mall.

Having made its first appearance in the 1984 European Touring Car Championship, the Jaguar XJS has appeared at many of the World’s leading circuits with racing royalty such as Win Percy, Martin Brundle and Tom Walkinshaw regularly taking to the wheel up until the car’s retirement from competitive racing in 1987. It wasn’t until 2011, and now under the ownership of JD Classics that the XJS was ready to return to the historic racing scene competing at Donington, Brands Hatch and both the Goodwood Revival and Festival of Speed to name a few.

Whilst the evening’s proceedings continued, our class winning XJS took pride of place on display in the prestigious club’s foyer. Having been pitted against many of the World’s greatest existing touring cars from the era, our XJS still commanded its class, an achievement of which the JD Classics team hope to replicate and excel as we look forward to the upcoming 2013 rounds including Donington Historic Festival, Brands Hatch GP Circuit and Algarve Classic Festival with further rounds for 2013’s JD Classics Challenge to be announced.