Having returned from a successful trip to Spa the weekend previous, the JD Classics team were back on the road once again, this time heading to La Sarthe circuit in France for this weekend’s Le Mans 24 hour race. Taking place on the Saturday of this famous endurance event celebrating its 90th anniversary, the Le Mans Legends race would see a field of sixty 1949-1965 produced cars such as Jaguars, Aston Martins and a host of famous racing marques negotiate the vast 13.6 kilometre long track.

Unloaded at La Sarthe circuit in blustery conditions were the ex-Fangio C-Type, ex-Canadian Works Austin Healey 100S and the ex-Cunningham Costin Lister that was first driven by Stirling Moss at Sebring in 1959. 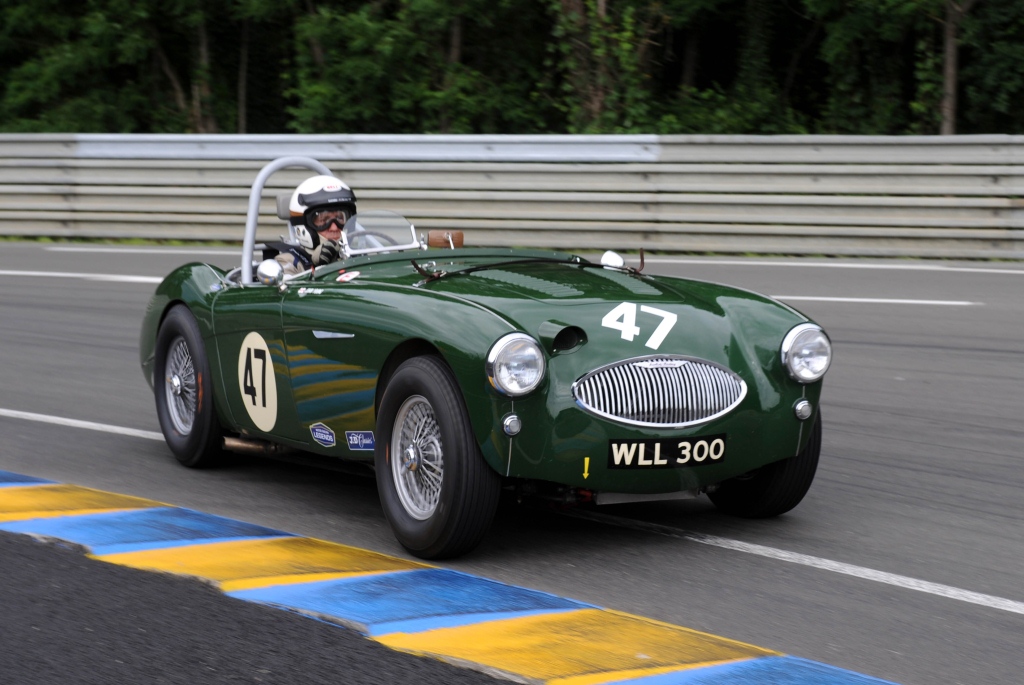 The 1955 Austin Healey 100S with John Young behind the wheel during qualifying.

Despite some heavy showers, Thursday’s qualifying turned out to be a dry affair as the three JD cars headed to the holding area at the end of the main pits ahead of the 60 minute session. As qualifying got underway, it became clear that getting a clean lap could prove problematic due to the large volume of traffic generated by the race’s extensive field. Despite the potentially problematic situation, the JD team managed to successfully negotiate the congestion by bringing the cars back into the pits in a bid to send them back out into clear track. Fortunately, this strategy paid off as Alex Buncombe and the Costin Lister, featuring JD Classics’ latest competition six cylinder engine, put in a stunning time of 4.40.8 on Lap seven giving him a strong pole position a clear three seconds faster than the second placed car. The C-Type of JD Classics’ MD Derek Hood and Chris Ward qualified in a strong 19th overall and 1st in class while the Austin Healey of John Young failed to break free of the congestion, however still qualified well in 36th position. 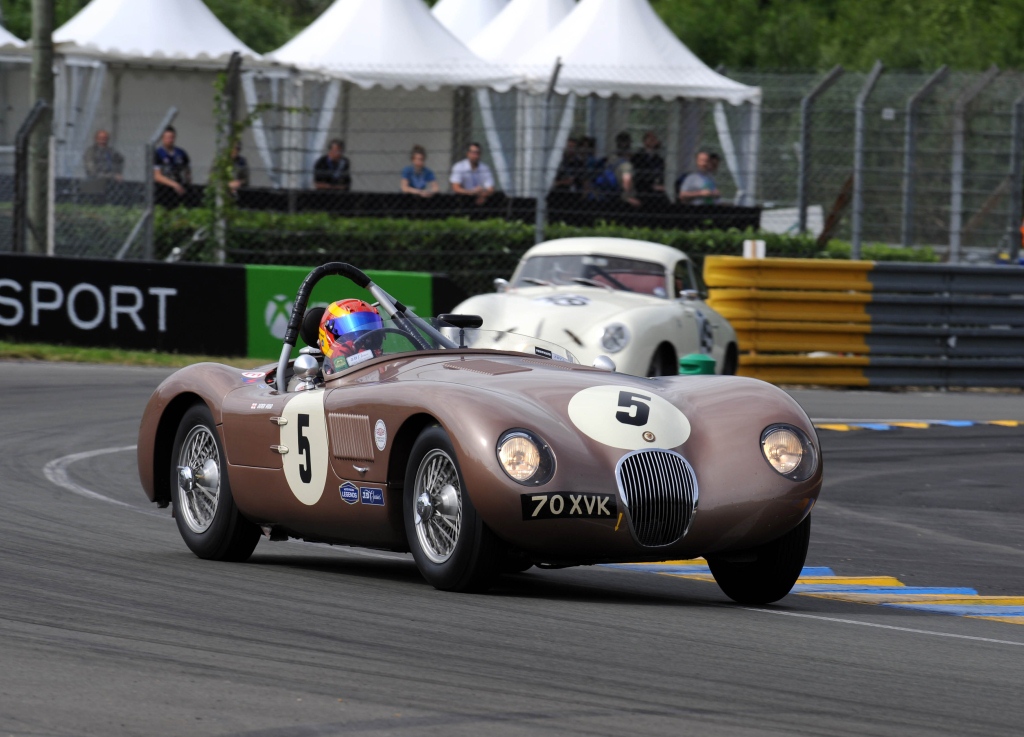 Chris Ward and Derek Hood drive the ex-Fangio C-Type to second in its class.

With a free day ahead of Saturday’s race, the JD team spent Friday preparing the cars and once routine checks were done and driver comments were taken into account, the cars were cleaned, covered and tucked away for the night.

As Saturday rolled round and the swarms of crowds started to fill the grandstands, so the weather conditions began to deteriorate and a light drizzle dampened the circuit, making track conditions difficult.  As the lights went green, Alex’s pole sitting Costin led the roaring pack down to the Dunlop Bridge with the second placed AC Cobra Daytona Coupe of Ludovic Caron hot on his heels. However, having shaken off the competition, the JD Lister had a strong eight second lead over the rest of the field by the end of the first lap. Further down the field both the C-Type and Austin Healey were fighting their own battles as they both steadily made their way through the field. 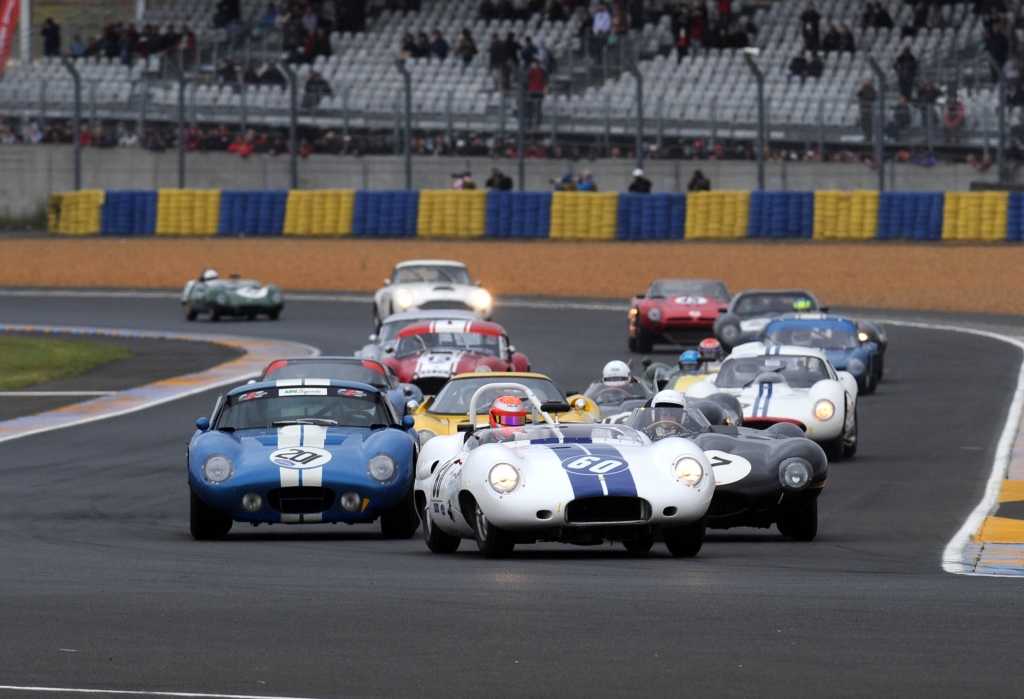 The ex-Cunningham Costin Lister leading the field to a unrivalled victory.

Once the designated pit window opened, Alex was the first of the three cars to come into the pits for the mandatory pit stop. Totalling ninety seconds all in all, a minute of which cars must be stationary; Alex’s pit stop was timed perfectly as he re-emerged to join the race maintaining his lead.

After a long stint in the C-Type, Derek came in to hand over to Chris and such was the early pace of the car that it was now well up the field. Once again, John and the Austin Healey hit the worst of the traffic but after another well-timed pit stop, he was now moving up through the field.

Alternating between light drizzle and heavier showers, the weather conditions did little to dampen the spirits of the JD team as Alex maintained his strong position and swept passed the chequered flag to take a well-deserved victory. The C-Type and Austin Healey also completed the demanding 45 minute race with the C-Type having moved up to take 2nd in its class and 17th position overall and the Austin Healey moving up to a very respectable 3rd in class and 20th overall. 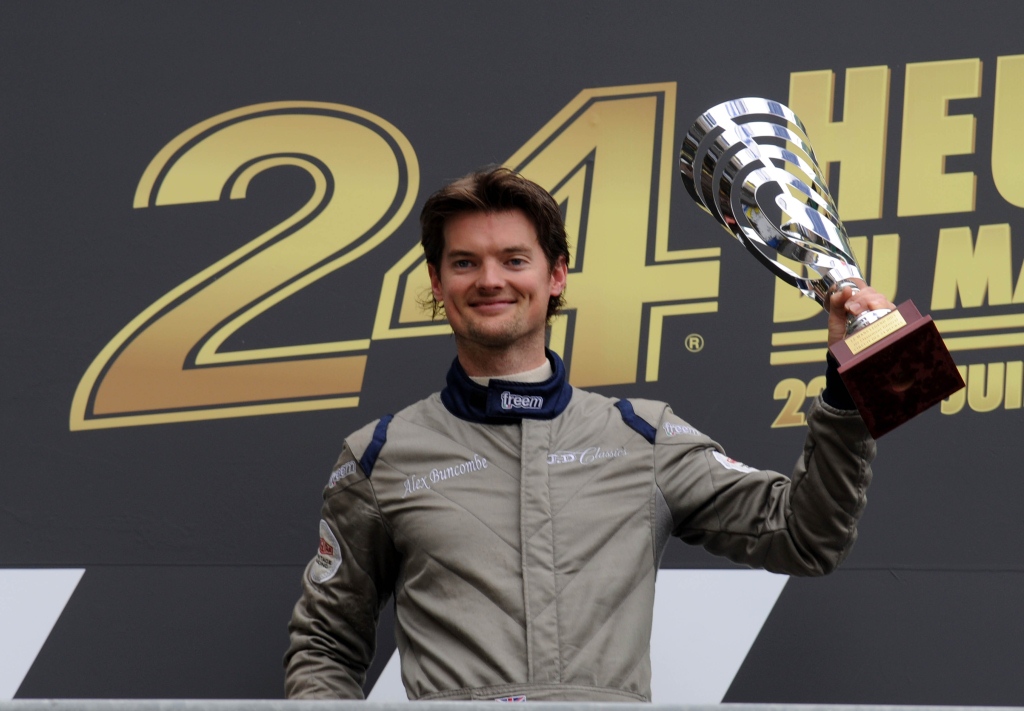 With all three cars winning trophies including top honours, this proved a real testament to the technical crew and not least to the drivers, who all demonstrated skill and race craft in such difficult conditions, bringing the cars home with not a scratch on them.