One of the classic motor racing scenes most popular event on the calendar, the Goodwood Revival has remained a sell-out event with tickets selling out months before the event itself. With just under 150,000 spectators in attendance, demand for tickets to this iconic event has increased with every year since its inauguration in 1998. Part of the Revival’s innate charm that makes it such a popular event is the intrinsically vintage style of the weekend with spectators, mechanics and all attendees adopting the style of the 1940s, 50s and 60s attire synonymous with this Golden era of motorsport. 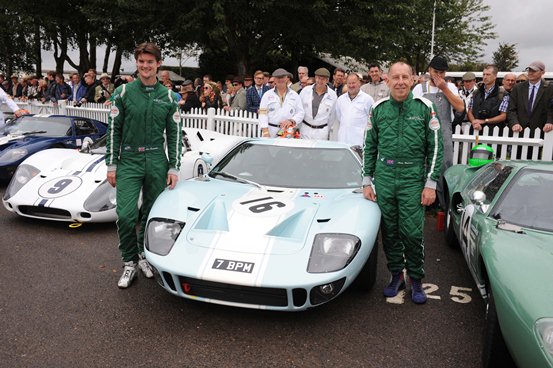 Despite the spectacular array of period aviation that was also on display and taking to the skies, the JD Classics team kept their feet firmly on the ground, instead concentrating on the on-track racing action. Having been invited by Lord March to participate in this year’s proceedings at the Revival with three classic racing cars, the JD Classics Historic Racing Department was privileged to be invited to take part in the three day event.

Unlike years past, this year’s Revival was plagued by typically British weather with heavy rain affecting the majority of the weekend. However, this did little to deter the swarms of spectators or indeed the cars and drivers participating.

Taking to the track first to qualify on Friday was the ex-Fangio Jaguar C-Type ahead of the evening’s Freddie March Memorial Trophy. With damp conditions on-track, the driving duo of Alex Buncombe and John Young took to the track to qualify in an impressive 2nd position on the grid. With the first 4 placed cars on the grid being C-Types, the model proves its staying power within a field of highly competitive contemporaries.

Entered in the Whitsun Trophy Race, the JD Classics Ford GT40 took to the track to qualify next. Celebrating the 50th anniversary of the Ford GT40, this year’s Whitsun Trophy Race was dedicated specifically to the model with an extensive field of 27 examples taking part, roughly a quarter of the number of GT40s produced. With this in mind, competition was understandably fierce. Despite the testing weather conditions and the highly competitive field, the JD Classics GT40 qualified 3rd on the grid under the experienced driving abilities of Alex Buncombe and Le Mans winning Jaguar driver Andy Wallace. 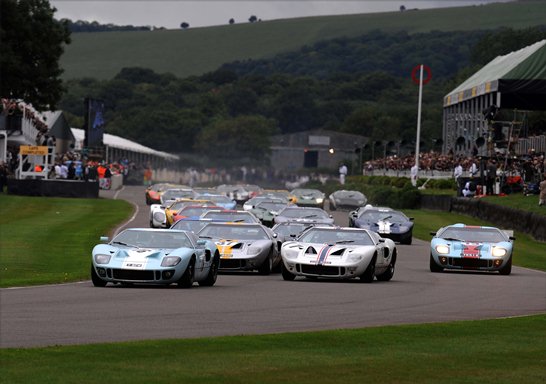 Andy Wallace gets a strong start off the grid for the Whitsun Trophy race as he leads the pack of GT40s off the line.

Lastly to qualify of the JD entries was the 1959 Lister Knobbly ‘YOB 575’. Still carrying its original bodywork, this Lister Knobbly is possibly one of the most original racing examples of its kind. A large field of 29 cars, JD Classics’ MD Derek Hood took the driver’s seat for the weekend. Despite being denied a clean lap due to the level of congestion on track, the Lister qualified in the middle of the pack.

With three wet qualifying sessions over, the JD crew made final preparations for the C-Type ahead of Friday night’s Freddie March Memorial Trophy Race.

As the grid for the evening’s Freddie March Memorial Trophy lined up, the JD C-Type was ready to defend the title which was claimed by the car at 2012’s Revival, however with the light deteriorating and the weather worsening, the race was going to be a battle for all 30 cars. Starting the two driver race was John Young who throughout his sterling stint battled with the Cooper Bristol of Nick Wigley and John Ure as they both vyed for the lead, chopping and changing the lead right up until driver changeovers. As the pit lane opened, John came in to hand the drive over to Alex Buncombe. By the time that the C-Type had returned to the track, conditions worsened with the mixture of rain and poor light hampering visibility. 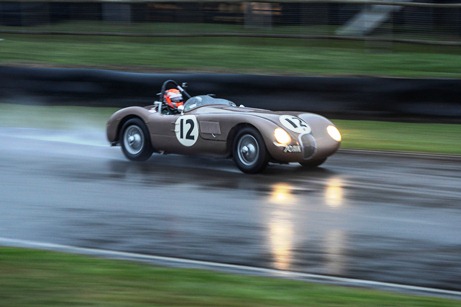 The ex-Fangio C-Type driven by Alex Buncombe and John Young to an impressive victory in the Freddie March Memorial Trophy.

Now with the safety car deployed due to an accident had by Nick Wigley in his Cooper Bristol, the pack grouped up once more. Unfortunately for Alex and the JD C-Type, the poor visibility meant drivers were having problems seeing the official’s signals and when some overtook before the start line when the safety car came in, this therefore meant that a fellow C-Type had stolen the lead. Despite this set back, it wasn’t long before Alex was hot on the heels of the now front running car and before long Alex had not only reclaimed the lead but was extending the gap. As the weather continued to worsen and bearing Nick Wigley’s accident in mind, the organisers took the decision to end the race early with Alex Buncombe and the JD Classics C-Type leading by a hard earned 26 second gap. A great start to the weekend for the JD racing crew and Jaguar Heritage Racing, retaining the Freddie March Memorial Trophy for the second year in a row and so recording Jaguar’s second endurance win at Goodwood.

As Saturday dawned, the weather looked set to be as much the same as the day previous as the clouds rolled in, however it would take more than the weather to deter everyone as the spectators began to arrive in their droves. 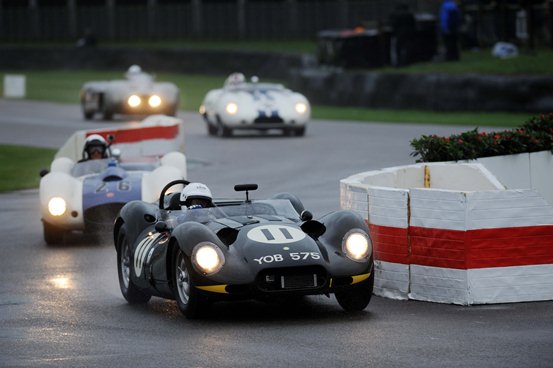 Under torrential weather conditions, the Lister Knobbly drove a consistent race in the Sussex Trophy.

Saturday afternoon saw the grid of GT40’s take to the track ahead of the Whitsun Trophy Race with the JD Classics GT40 sitting in 3rd position. Despite a strong start from Andy Wallace, his early surge was hampered by a slower car, however Andy still maintained a good position up until the pit window. Having handed over to Alex in a quick driver changeover, a car exiting the pit lane in front of the JD GT40 stalled. To add insult to injury, once the car had got started, marshals at the end of the pit lane held up the car’s including Alex from re-joining the track, Alex having lost a total of 30 odd seconds in the process. Nevertheless, this did little to faze Alex as he recorded the fastest lap of the race a stunning full second faster than the 2nd fastest GT40 thus reducing the gap between himself and the leading car to finish in a respectable 4th place.

Unlike to rest of the weekend, Sunday morning was bright and clear, however the forecast did not bode well for the majority of the day and, true to form the clouds rolled in and the heavens opened. By the time the Sussex Trophy Race was due, the rain had set in once more and the cars and drivers were sitting in the assembly area with umbrellas ahead of the race. Finally as the race got underway and the car’s left the grid, the conditions on the track were at their most treacherous having endured a next to constant weekend of rain together with remnants of oil on the track left by the motorbikes which took to the track previously. Despite such conditions, the Lister Knobbly of Derek Hood maintained its position safely in the middle of the field thus crediting both car and driver having successfully battled with gruelling conditions and marking the end to a fantastic, albeit wet, weekend of racing at this year’s Goodwood Revival.