Having cemented itself on the international historic racing calendar despite only in its third year, the Donington Historic Festival features a wide variety of historic racing cars ranging from the 1920s to the 1980s. With an extensive selection of the World’s top class examples performing on track, spectators could also enjoy an array of off track entertainment including trade stalls and an extensive display of static classic cars which have shaped much of the landscape of motorsport throughout the years.

This year’s festival paid a very special tribute to one of the sport’s most legendary characters; Ayrton Senna whose Formula One career began at Donington as a test driver in 1983. This year also celebrates 20 years since his masterful display at a very wet European Grand Prix at Brands Hatch in 1993. With the birth of a career that saw Senna win three Formula One World Championships ranking him amongst the sport’s most legendary figures, the Donington Historic Festival this year paid homage to the icon whose racing career started out on this British circuit 30 years ago. 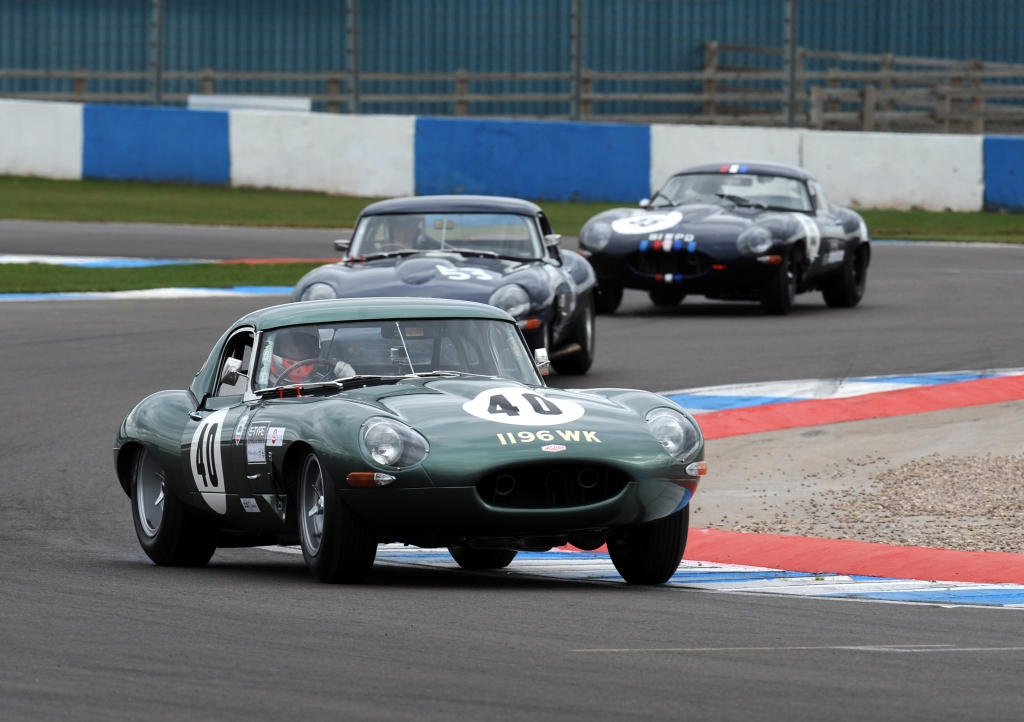 The three day bank holiday feast of on-track action kicked off with qualifying for the first round of this year’s E-Type Challenge series. Split into two 30 minute races over the weekend, a strong 20 car field took part including the first of six JD Classics entries for the weekend. Driven by 2012’s E-Type Challenge winner, Alex Buncombe returned to the track with the JD winning E-Type ready to defend their title. Having qualified an impressive second place behind the E-Type of John Pearson, Friday afternoon’s first race of the two parter looked set to be a lively one. With bright and sunny weather dousing Donington’s vast circuit, the race very much became a two car battle as John Pearson maintained position with Alex hot on his heels. However, part way through the race the JD Classics E-Type encountered an unexpected problem, forcing Alex to retire from the race. In sight of this and not wanting to compromise the usually flawless performance of the car, the JD Classics team took the difficult decision not to compete in the second race.

Friday morning also saw qualifying for Donington’s round of HTCC for 1966-85 Touring Cars with 70s Celebration Race. The JD Classics prepared Ford Cologne Capri of John Young and Chris Ward and the ex-Tom Walkinshaw Racing XJS of Alex Buncombe and Gary Pearson were part of the 26 car line up with both cars qualifying in competitive positions, the Capri in second and the XJS in fifth. After qualifying, the JD team took time to check over both cars ahead of Saturday’s demanding race. 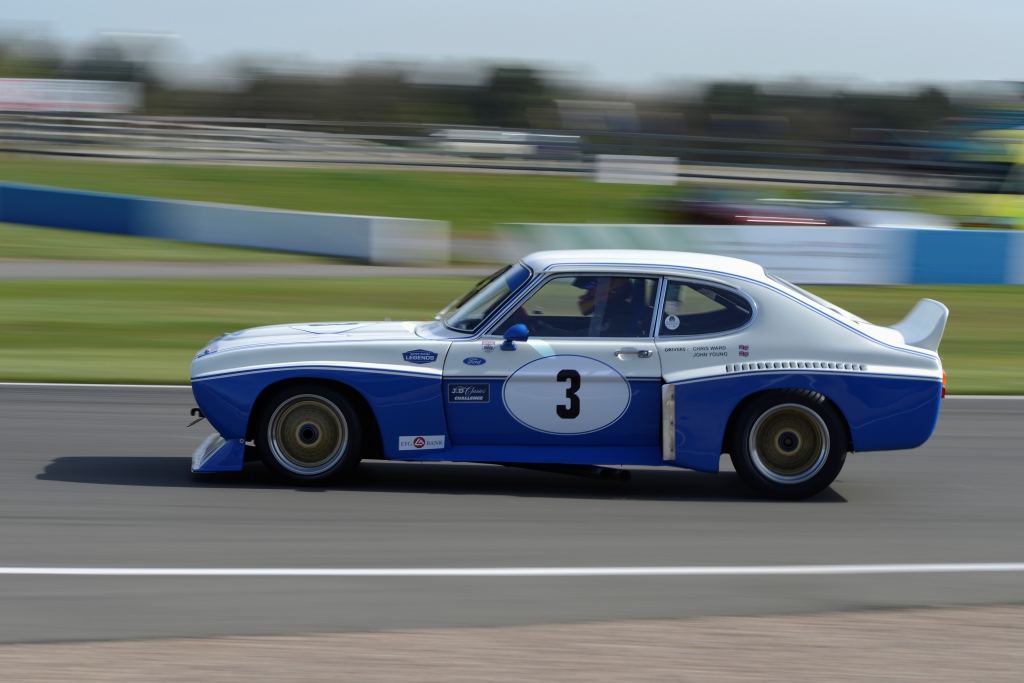 Having qualified in 2nd position, the Ford Cologne Capri of John Young and Chris Ward battled a highly competitive field to in 6th place.

Despite the cloudy and damp conditions, Saturday’s crowds still flocked to the banks and grandstands in their droves ahead of another day of jam-packed on-track action. The 45 minute two driver race consisted of a selection of the greatest Touring Cars of the 1970s and 80s. With the pole sitting South African Ford Perana Capri with Ford GT40 power maintaining position and taking top honours in the opening round, the XJS nevertheless gave a strong performance to finish in second place. The Capri of John Young and Chris Ward also drove a good race coming across the line in a respectable sixth place after an extra pit stop to remove a plastic bag from the radiator grill. 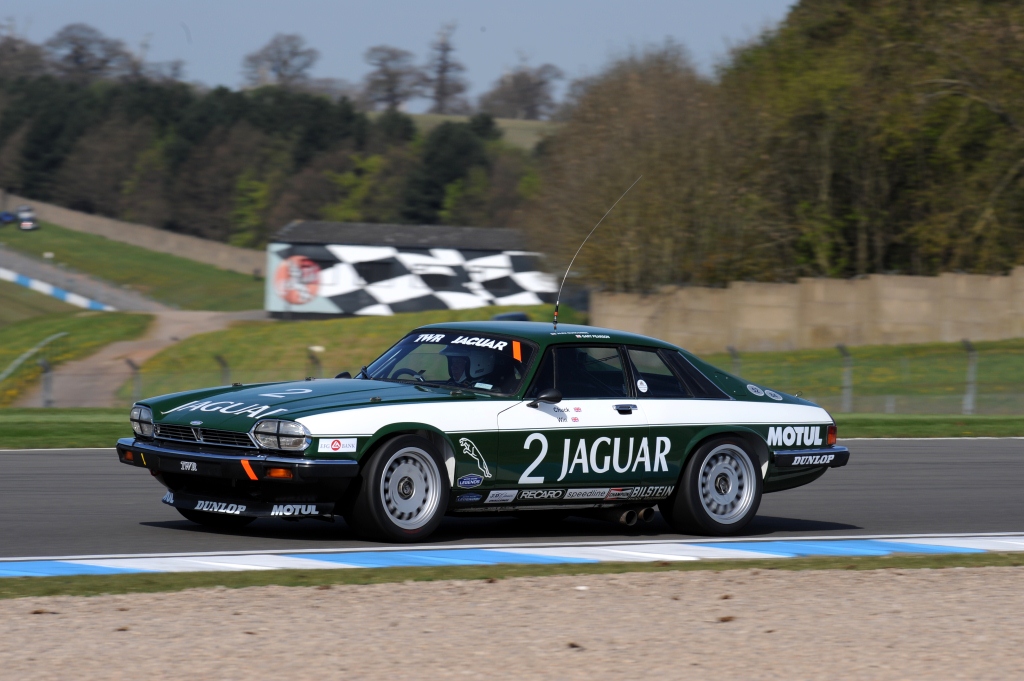 The RAC Woodcote Trophy saw a vast grid with a wide variety of pre 1956 sportscars including Aston Martins, Maserati’s and Jaguar’s making up the field. Fresh from competing in this year’s Mille Miglia, the JD Jaguar Cooper T33 was captained round the course by driving duo John Young and JD Classics MD Derek Hood. Lining up in 16th place on the grid, competition was fierce; however, in spite of this the Cooper maintained a steady drive, making its way through the pack. Thanks to the efficiency of both drivers and pit crew, driver changeovers went smoothly and once the 60 minute session drew to a close, the Cooper came across the line in sixth position having gained ten places throughout the race. 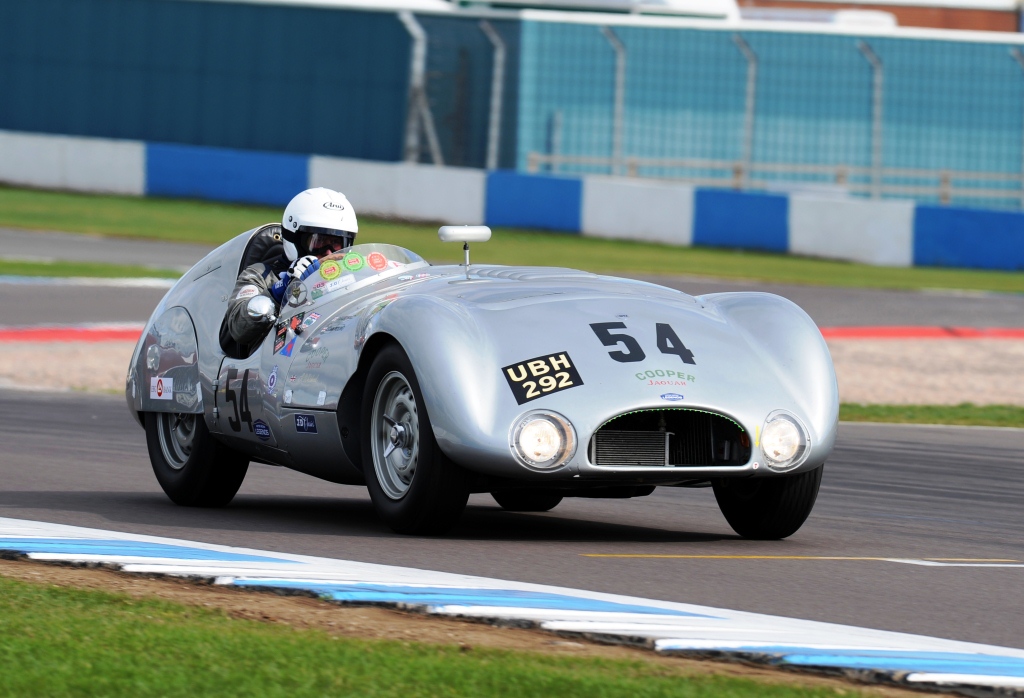 The Cooper T33 made up a staggering ten places during the RAC Woodcote Trophy race to come across the line in 6th place.

JD Classics’ Jaguar Costin Lister took to the track on Saturday to qualify for Sunday’s ever popular Stirling Moss Trophy, with drivers Chris Ward and Alex Buncombe sitting on pole, the Lotus 17 Prototype of Gabriel and Dion Kremer lining up alongside in second. Leading the field of pre 1961 sports cars, Chris Ward took to the wheel of the Lister for the first half of the hour long race, producing some stunning laps at the front of the pack. After 30 minutes, Chris handed the drive over to Alex who entered the race maintaining the Lister’s healthy lead. Having put in the fastest lap of the race, the JD Lister claimed victory over the second placed Lister Knobbly thus completing another successful weekend for JD Classics. 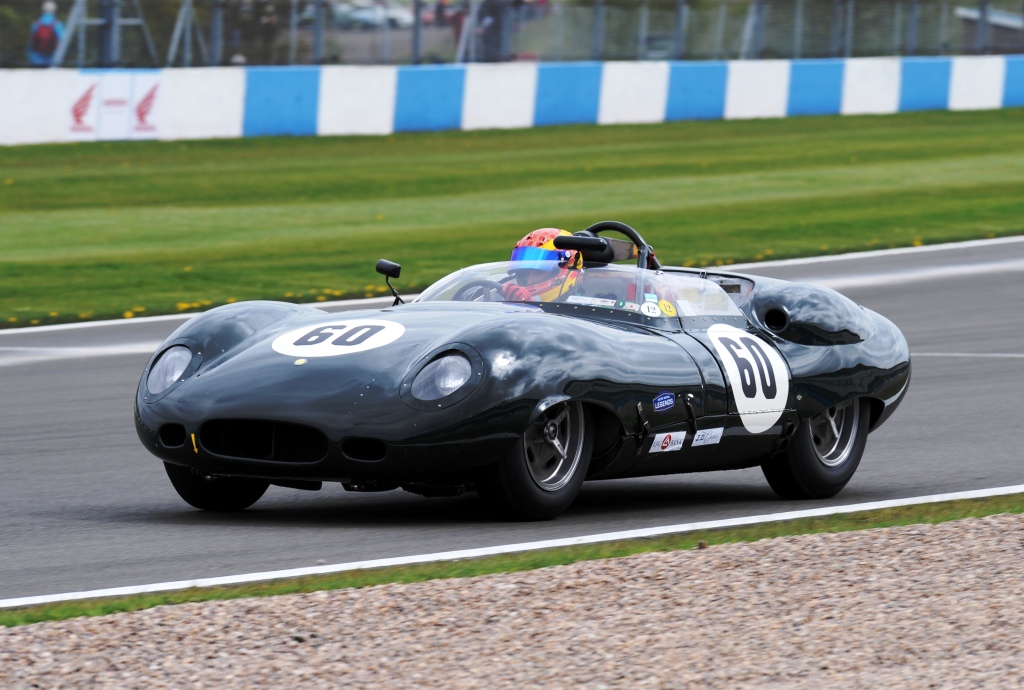