Any petrol heads that didn’t make it to last weekend’s Festival of Speed at Goodwood instead flocked to the Historic Super Prix meeting at Brands Hatch. With over 400  historic single seater, saloon and  sports cars taking part in the 18 race two day automotive extravaganza, spectators braved the uncharacteristically hot British weather for what was to be a high octane weekend of historic motor racing.

As with any of the major classic car events, the JD Classics race team were in attendance bringing with them their 1962 lightweight Jaguar E-Type ‘1196 WK’. Having competed successfully at many of Europe’s most demanding circuits such as Spa Francorchamps and Silverstone in the E-Type Challenge series, the JD team were in high hopes ahead of the E-Type’s performance.

Participating in the combined HSCC Guards Trophy and E-Type Challenge race, the JD E-Type faced quite a challenge with a sizeable field of 45 cars, including 19 E-Types and an array of Chevrons, Lotus’ and Elva’s. 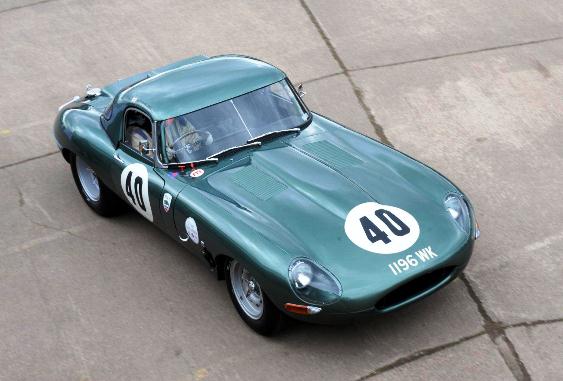 Taking place on the Saturday morning, the JD E-Type and driver Chris Ward took to the track  putting in a solid performance to qualify 3rd amongst the E-Types. A Chevron dominated session, the first six positions on the grid were taken up by British based manufacturer.

Lining up behind the E-Types of Mike Wrigley and father son duo Chris and Anthony Scragg, the JD E-type was ready for battle and as the red lights turned to green so the 45 car charge began.

By the time the field came round to start their second lap, Chris Ward had overtaken both Wrigley and Chris Scragg to now be leading the E-Type field. Over the next few laps Chris continued to widen the gap until the safety car was deployed thus allowing the competition to make up some time. In spite of this, once the safety car had returned to the pits Chris Ward managed to distance the gap once more over the last couple of laps to come passed the chequered flag as the first placed E-Type. Taking top honours in the Guard’s Trophy race was the Chevron B8 of James Schryver who stole the victory from the fellow Chevron B8 of Martin O‘Connell who, having led for the majority of the race, retired two laps from the end.

As the weekend’s action came to a close, the JD team found themselves not only celebrating the Best in Show award from the weekend’s Goodwood Festival of Speed (to read more, click here) but also two great results for the ‘1196 WK’ at Brands Hatch. Such fantastic results prove evident of the hard work and dedication of the race team and all involved in the restoration department.