Hosting its annual Bank Holiday weekend of classic racing, the Brands Hatch Masters Historic Festival provided classic car fanatics with a jam-packed three days of automotive action. From the British Superbike Championship to the Formula One British Grand Prix, a kaleidoscope of racing events have taken place on the iconic Brands Hatch circuit for almost 50 years. With the steeped historical value of this now iconic British circuit in mind, 2013’s Masters Festival have introduced two FIA certified championships; the FIA Masters Historic Sports Car and Historic Formula One Championships to the festival thus adding to the already varied selection of races and cars celebrating the circuit’s oldest automotive adversaries.

With a varied mix of powerful touring cars, the Masters 70s Celebration with Historic Touring Car Challenge race looked set to cause quite a commotion as an extensive 26 strong field of 1970s touring, sports and saloon cars lined up on the Indy circuit for the first of a two race round. Lining up on the grid for JD Classics were two entries; the Broadspeed Cologne Capri of John Young and Chris Ward, and the familiar ex-Tom Walkinshaw Jaguar XJS, driven by Jaguar Heritage works driver Alex Buncombe with Chris Ward again taking to the driver’s seat in this two driver race. Qualifying saw both cars perform well with the Capri, in particular sitting pretty in second position ahead of Saturday afternoon’s race. Despite qualifying well, competition was fierce with the top nine cars all qualifying within a very close 1.7 seconds of each other. After a spirited 40 minute race, both cars performed well with the XJS and Capri finishing in 3rd and 4th place respectively, each also finishing 1st in their individual classes. 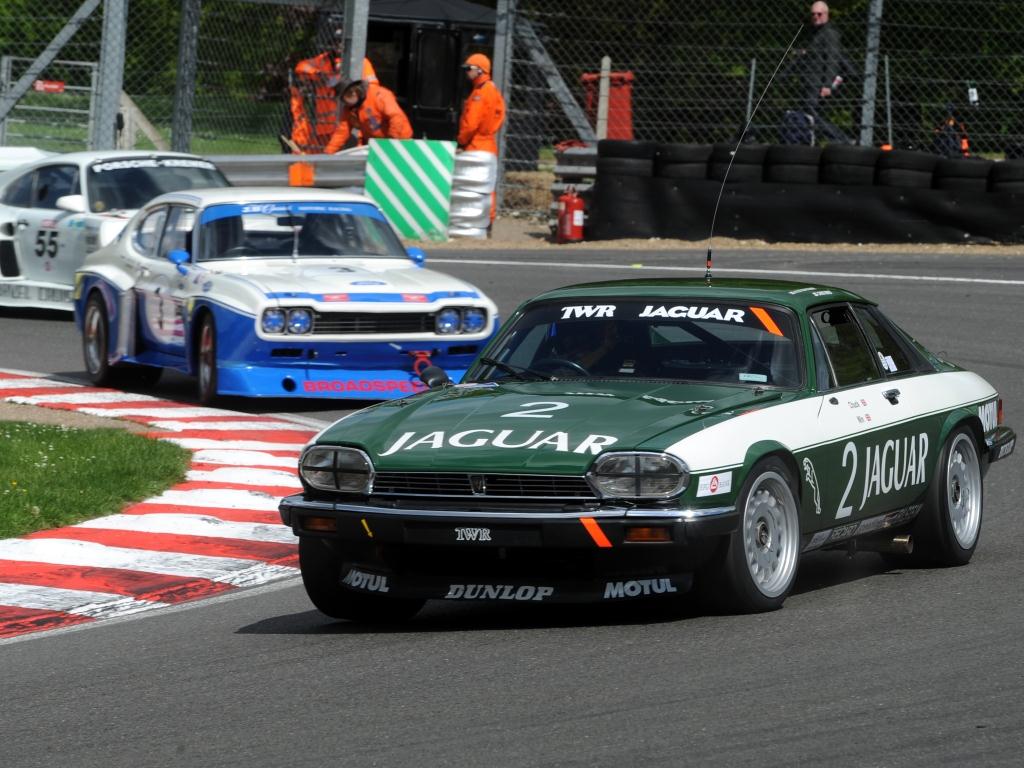 Alex Buncombe and Chris Ward driving the Tom Walkinshaw XJS to a podium position and a class win in the first of the two round Masters 70s Celebration Race.

Come Sunday, the second Masters 70s Celebration race extended out onto the full Grand Prix circuit. Contrary to Saturday’s race, Sunday’s finale was set to be a noisy one in true touring car fashion and with noise restrictions lifted, the JD crew spent Saturday evening removing the silenced exhaust system in favour of an open piped system. Similarly to the previous days qualifying, the Capri once more qualified in second place, a mere five tenths of a second behind the pole sitting Porsche 935. The XJS also performed consistently, qualifying in seventh position. Come Sunday evening, both cars got off to a good start as Sunday’s final race got underway. With driver changeovers pending, Chris Ward and the XJS were bought in first as Alex Buncombe jumped in for the longer stint thus allowing Chris a breather before the Capri was brought in. Having come in to the pits in the lead, the Capri was soon back on track, now with Chris in tow, maintaining the lead and fighting off the advances of the second placed Sunbeam Tiger of Jon Finnemore and Chris Beighton with the JD Classics XJS of Alex holding its own in third. By the time the chequered flag fell, the Capri had comfortably stolen the show, a full 10.5 seconds ahead of the rest of the pack. Meanwhile, the XJS held its own, fending off a spirited attack from the fourth placed Ford Escort of father/son duo Robert and Sean Brown to finish the race in third position. 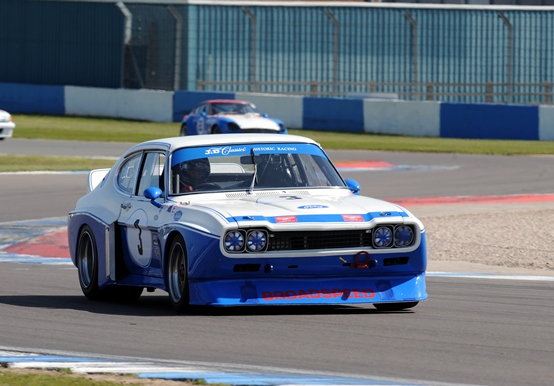 The Broadspeed Cologne Capri was driven to a clear win in the second of the Masters 70s Celebration.

Greeted on Monday morning by yet more dry and sunny weather, qualifying for the afternoon’s Woodcote Trophy race started the day’s proceedings. As with the Capri, Chris Ward and John Young paired once more to race the JD Classics Cooper T33, which the dynamic duo qualified on pole by a clear second.

Monday’s afternoon race saw 29 of the World’s finest pre-1956 sportscars lined up behind the pole sitting Cooper including the D-Type of Carlos Monteverde and Gary Pearson sitting a row back in third. With John starting on pole, the Cooper got off to a slow start, coming round after the first lap in third place. However, John and the Cooper soon reigned the field back in to line and were back in front by the end of the lap three. By the time it came to driver changeovers 20 minutes in and having already set what was to be the fastest lap of the race, it seemed the Cooper, John, Chris and the whole JD Classics team were on fire. The Cooper even managed to maintain a strong 8 second lead over the now second placed D-Type of Monteverde and Pearson of which won the battle of wills in the Donington Historic round of the Woodcote Trophy earlier in May.  Unfortunately, the Cooper’s strong lead and dominant charge was cut short as the car suffered an unexpected brake pad failure causing the cars retirement and handing the D-Type a second Woodcote Trophy win. An unfortunate retirement from a dominant race and potential winning position. 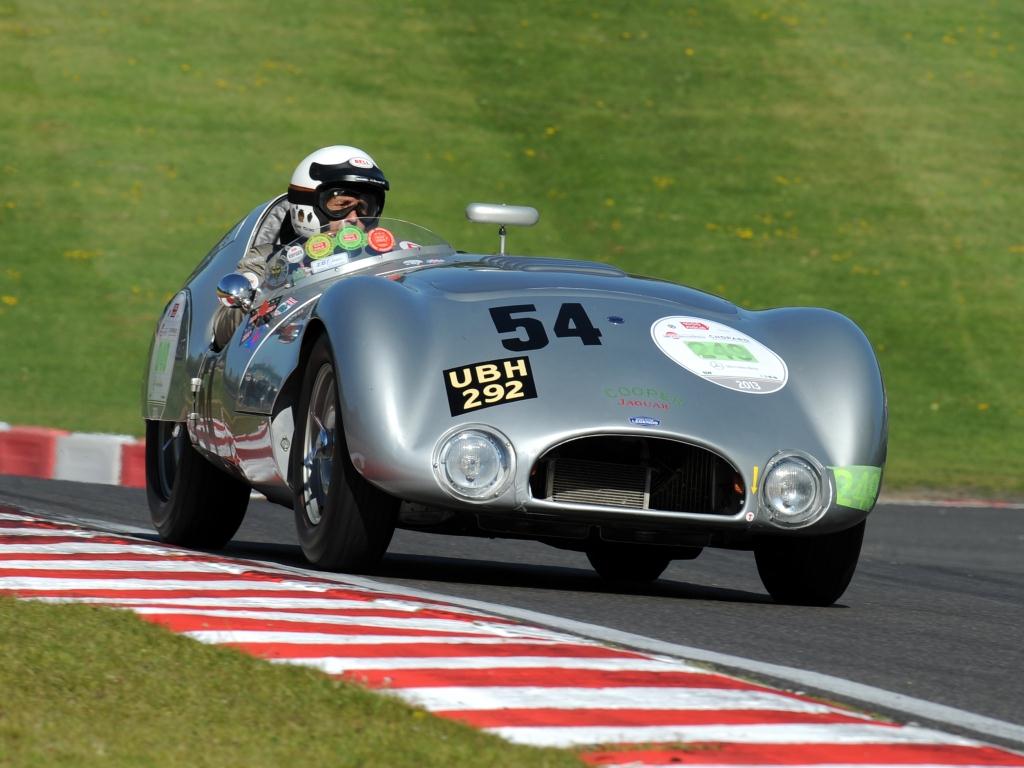 Despite a disappointing end to the weekend, all three cars still performed consistently with a well-deserved win for the Broadspeed Cologne Capri which performed faultlessly all weekend.