As the 2013 Historic Racing season draws to a close for another year, the JD Classics Historic Racing Department annually flock to the sunnier climes of the Algarve to enjoy one last weekend of racing to round off the season.

Overnight showers meant that Saturday morning’s qualifying sessions would take place in wet conditions on the already challenging Algarve circuit. The Motor Racing Legends 50’s Sports Car Race was the first of the day’s qualifying sessions as the Cooper Jaguar T33 of John Young, Derek Hood and Andrew Smith and the Costin Lister of Alex Buncombe and Chris Ward prepared to brave the damp conditions. Despite poor visibility conditions, both cars ran consistently with mandatory driver changeovers completed smoothly resulting in a pole position for the Costin Lister a clear 2 seconds ahead of the second placed Lotus 15 of Philip Walker and Miles Griffiths. The Cooper also performed well qualifying in 7th place. 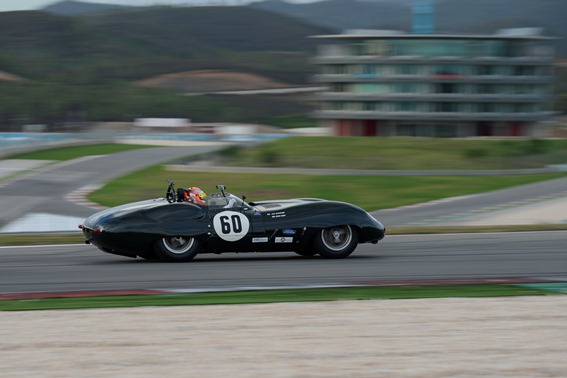 As the clouds started to clear and conditions began to improve, so the JD crew readied the powerful TWR XJS and Cologne Capri pairing as they prepared to take to the track. As you would expect from a field of vintage Touring Cars, it was going to be high paced, not to mention high noise as the 40 minute qualifying session began. First onto the track was the XJS and with Chris Ward behind the wheel for the first driver stint, the car performed well maintaining some competitive lap times before coming into the pits to hand the drive over to John Young. Following the XJS out was Andrew Smith in the Ford Cologne Capri and having already put in some unrivalled lap times including the fastest lap of the session so far, the Capri was brought into the pits for driver changeover. As Andrew handed over to Alex Buncombe, the Capri maintained the momentum throughout the rest of the 40 minute session as Alex continued to increase the pace, knocking time off every lap. Despite pressure from the Ford Escort of Daniel and Robert Brown, the JD Capri couldn’t be caught, driving its way to a clear pole position. The XJS also performed well, qualifying in third. 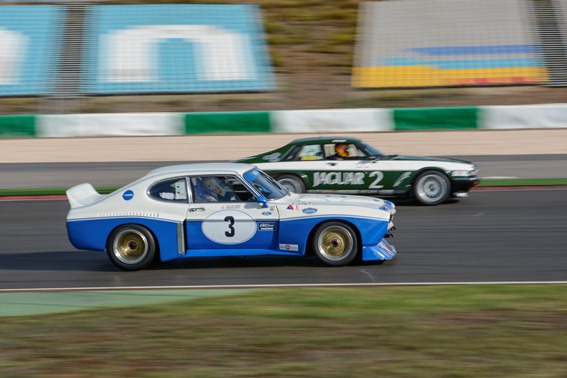 The Ford Cologne Capri and XJS dominated qualifying to line up on the grid ahead of Saturday's first race in 1st and 3rd position respectively.

Last out on track to qualify was the Lightweight E-Type of Derek Hood, Alex Buncombe and Chris Ward. Having never driven the E-Type before, Derek put in some competitive times within the vast 23 car field. The JD crew made the decision to keep track time to a minimum during qualifying in order to preserve the car ahead of Sunday’s long GT and Sports Car Cup Race, however the E-Type had still done enough to qualify in 3rd position despite stiff competition from the fellow E-Types of Nathan and Larry Kinch and the Gotcha Racing E-Type of Frank Stippler.

With all five cars having qualified well, the JD crew had little time to spare as they began to prepare the Lister, Cooper, XJS and Capri for Saturday afternoon’s races.

The first of the two-race round of the Historic Touring Car Challenge saw a small but fearsome grid take to the circuit and with both JD Touring Cars having qualified at the front of the field, the 30 minute race got underway. Driving the same Capri which was raced by his father Jonathan in period, Alex Buncombe led the pack from a rolling start and gradually began to extend his lead over the rest of the field throughout his driver stint. Having already built up a sizeable lead, Andrew continued the momentum to take the chequered flag over 40 seconds ahead of the second placed Capri RS3100. Having sustained a strong 3rd place throughout the majority of the race, the XJS of Chris Ward and John Young just missed out on a podium position on the final lap to the Escort MK1 of Robert and Sean Brown. Nevertheless, the TWR XJS still finished well in 4th place overall and 1st within its class. 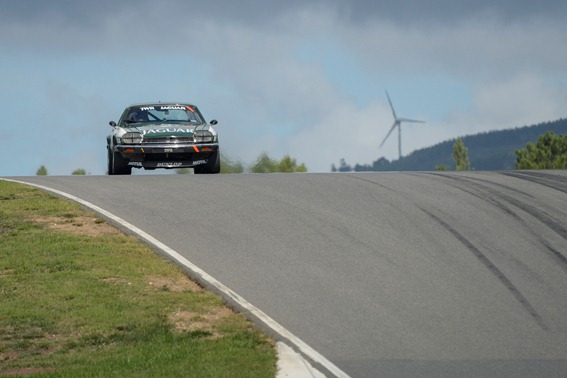 The XJS drove to a 4th place overall and 1st in class within the Historic Touring Car Challenge Race.

With the race schedule running late, the officials took the decision to knock 15 minutes off the 2-hour ‘50s Sportscar Race. Unfortunately, the change in schedule did not give Alex Buncombe enough time to make his transition from the winning Capri to the Costin Lister and by the time Alex was ready to take his place on pole position, the pit window for the formation lap had already closed meaning Alex and the Lister had to start the race from the pit lane. With the Cooper T33 sitting in 7th place, the grid came round at the end of the formation lap through for a rolling start. As the lights went green and the 15 car field roared round the first corner, the JD Lister began its attack from the back of the grid as Alex began working his way through the field and by the end of the first lap, the Lister was already running in the top half of the field. By Lap 5, Alex had made his way through the field and was comfortably extending his lead setting the fastest lap of the race by a clear three seconds. The Cooper of Derek Hood was also maintaining a quick pace. As the light began to fade and the race was plunged into darkness, the driver changeover window opened with Alex handing the Lister drive to Chris Ward and John Young taking over from Derek in the Cooper. Despite the strong lead of the Lister, Chris Ward pitted unexpectedly halfway through his driver stint. Unfortunately, gearbox problems meant that the Lister was forced to retire. A disappointing end for the JD Lister which looked set for victory. Despite running well throughout the race, the Cooper was forced to retire from the race due to a technical issue. Despite this, however the Cooper had still done enough to finish 2nd in its class. 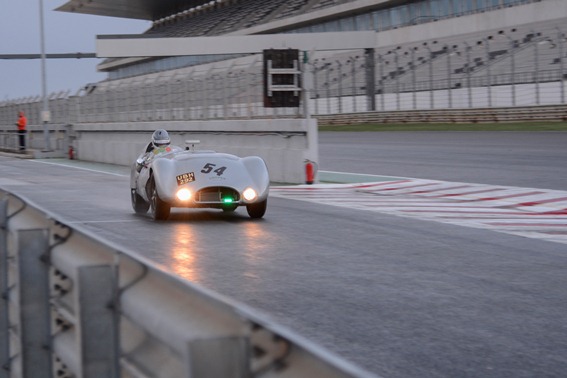 The Cooper Jaguar of Derek Hood, John Young and Andrew Smith still finished 2nd in its class despite an early retirement.

The JD crew faced an early start on Sunday morning as they prepared the Lightweight E-Type for the morning’s GT and Sports Car Cup. With Derek Hood driving the first of three 40 minute driver stints, the JD E-Type lined up on the grid in 3rd position. As the race got underway the E-Type ran well putting in some competitive lap times, however half an hour into his 40 minute stint Derek bought the E-Type into the pits where the race crew determined that the limited slip differential had failed. Despite this, the E-Type rejoined the race and after the 40 minutes were up, the team signaled for Derek to pit for driver changeovers. Chris Ward was next to take to the wheel where he continued to improve the car’s lap times and work his way through the field. Although the handling of the car had been compromised due to the differential failure, Alex Buncombe still managed to regain the time that was lost during the unexpected pit stop to qualify the E-Type in 4th position. A penalty handed to the car in front however promoted the E-Type to 3rd place also finishing 2nd in class. 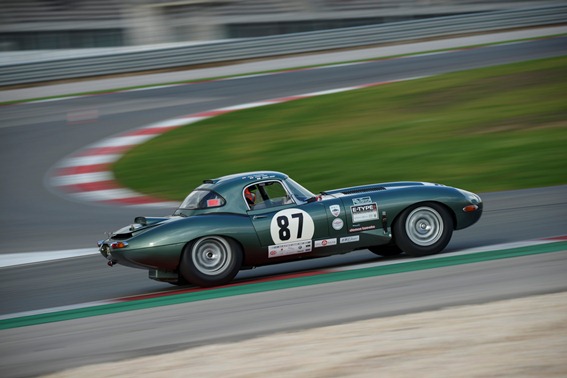 The Lightweight E-Type raced its way to a podium position within the grueeling 2 hour GT and Sport Car Cup Race.

Having run a dominant first race, the Capri and XJS sat once again on the first and second row respectively ahead of the second Historic Touring Car Challenge Race. Leading the 9 car field through the green lights from a rolling start, the Cologne Capri remained a dominant force and, much like the HTCC Race the day previous remained at the front of the pack as Andrew Smith charged around the Algarve circuit extending his lead with every lap. Similarly, the XJS of John Young was also maintaining a strong 4th position. Once the pit lane opened for driver changeovers, the JD team took the decision to bring the XJS in to the pits first thus giving the Capri an extra lap to build up its lead. With the XJS back out on track with Chris Ward behind the wheel, the Capri was brought in the following lap as Alex Buncombe took over for the final stage of the 30 minute race. Rejoining the race whilst still maintaining its lead, Alex continued the momentum and the Capri sailed to another clear victory a full minute and a half ahead of the second placed Ford Escort to give the Ford Cologne Capri a double victory at this year’s Algarve Class Festival. The XJS just missed out on a podium position but nevertheless finished in a respectable 4th place overall and 1st in its class. 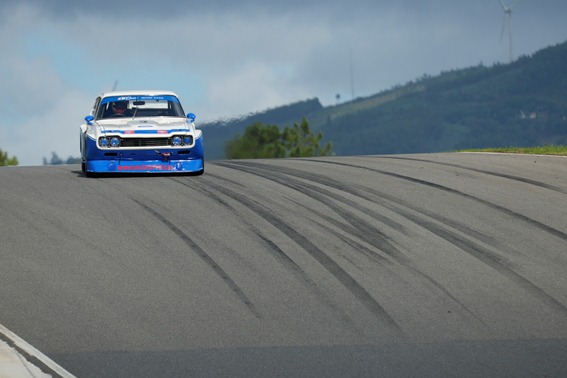 Despite a disappointing weekend for the Costin Lister and Cooper, both Touring Cars and the JD Lightweight E-Type performed consistently throughout the weekend with the Capri storming to an unrivalled double victory for the JD Classics team thus signaling the end of another fantastic year of historic racing for JD Classics.