Now in its 22nd year, the Silverstone Classic provides everything and more of which any discerning motor enthusiast would expect to see at a race meeting of such a size and with a staggering 24 races from which to choose, not even the most hard to please fan would leave the weekend feeling disappointed. With last year’s Silverstone Classic thought to be the biggest so far with a record 80,000 spectators in attendance, this year’s event certainly had a lot to live up to.

An annual occurrence at the Classic, the celebrity race had stars lining up to take part and this year was no exception with an array of familiar faces donning the racing overalls including celebrity race regular, chef Heston Blumenthal and Jamiroquai front man and self-confessed car fanatic Jay Kay. The off track action was juat as varied with an array of over 7000 classic cars and marques scattered around the infield on static display. Similarly to last year which saw the 50th celebration of the much beloved E-Type, 2012 and the Silverstone Classic carried on this tradition celebrating the Lotus Elan, AC Cobra and Triumph Spitfire all of which demonstrating why they're still fabulous at 50! With extensive entertainment both on and off track it is no wonder why the Silverstone Classic goes from strength to strength with every year. 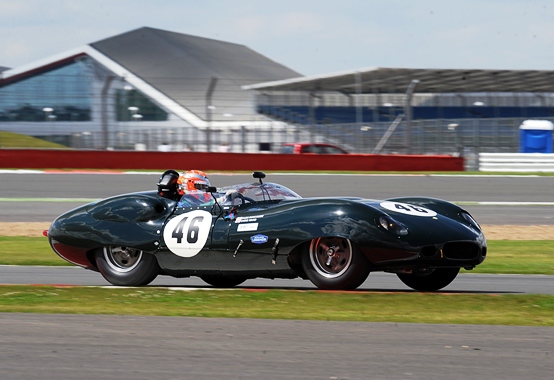 A regular at the Silverstone Classic, this year was no exception as JD Classics entered four of their competition historic racing cars. Having not long returned from the Le Mans Classic following a successful weekend’s racing, the team were hoping for more of the same sort of results at Silverstone. Needless to say we were most definitely not disappointed.

Saturday’s qualifying was plagued with the traditional British summertime weather…dull and damp as our first car, the Cooper Jaguar T33 took to the track to put in a time for the Woodcote Trophy. In spite of the challenging weather conditions, the Cooper qualified an impressive 5th behind 3 D-Types and a C-Type. By lunchtime, qualifying for the Stirling Moss Trophy took place and although conditions remained dull, the track appeared to be drying out. Both our Jaguar D-Type and Costin Lister were ready and raring to go with the D-Type out on track first. Struggled to put in a clear lap due to the large volume of traffic on track the D-Type qualified in a disappointing 26th position. Our Costin, on the other hand was much more fortunate finding some clear space and recording a lap of 2:22 seconds, a time of which secured the Costin pole position ahead of Sunday’s race. Following a move from the national to the new international pits, our E-Type was the final JD entry left to qualify and with an extensive field of 35 E-Types to contend with, Alex Buncombe delivered a strong qualifying session, placing the E-Type firmly on pole with a time of 2:56.192. 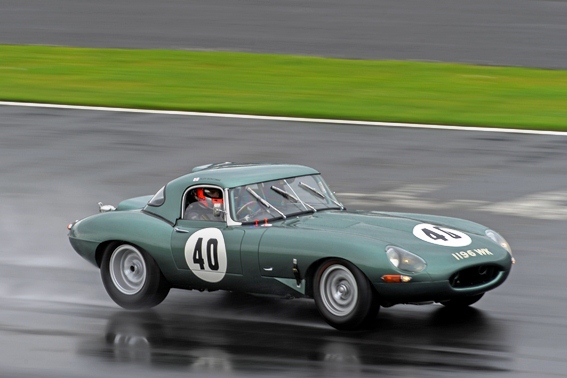 Our Lightweight E-Type braves the typically English weather to take a double victory in the E-Type Challenge Race.

By the time Saturday had rolled round the weather was looking up with a much drier and brighter day on the cards. The first race of the day saw the first of two 30 minute Woodcote Trophy races with Andrew Smith starting in the Cooper T33 and handing over to John Young during the allocated pit window. Andrew got off to a fantastic rolling start and as the lights turned green and the pace car darted into the pits, Andrew Smith demonstrated the Cooper’s racing ability picking off three of the four cars in front by the first corner. By the second corner, the Cooper had sensationally out-braked the front running D-Type of John Pearson to take the lead. By the time it came to driver changeovers, Andrew Smith had extended the lead by a staggering 11 seconds before handing over the Cooper drive to John Young. Now, however the faster of the Pearson brothers had taken to the driver’s seat of their D-Type making light work of the remainder of the race thus securing the victory. The Cooper however still finished in a very credible second position. The Cooper however maintained its strong run at Silverstone taking victory in the weekend's second Woodcote Trophy race. With the Woodcote Trophy being the first race of the day, the team faced a long wait until later that evening for the first of two E-Type Challenge races. Although there were many an exciting grapple further down the field, the race very much remained a one car show with Alex Buncombe and his JD Classics E-Type never headed and going on to take the chequered flag almost five seconds clear of the second placed E-Type. 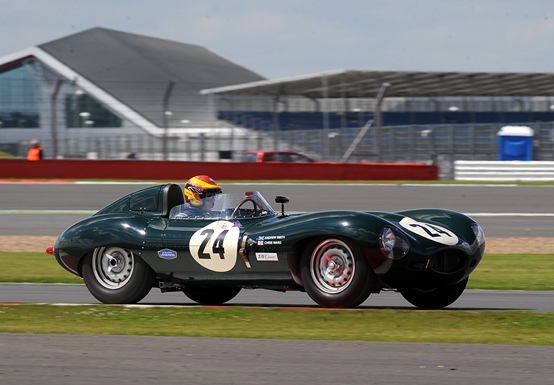 As the weekend progressed so did the weather and by Sunday morning, conditions were looking bright, clear and hot. With equally heaving, if not bigger crowds than Saturday, the JD team geared up for yet another high-octane day of racing. Sunday’s events kicked off with the Stirling Moss Trophy race. Alex Buncombe sat on pole with our Jaguar Costin Lister while Chris Ward started in the D-Type. Once the lights turned green and in true to form fashion, Alex maintained the lead and gradually edged away from the rest of the field. Meanwhile, the D-Type had a lot of traffic to contend with being in the middle of the pack and therefore in the eye of this automotive storm. As Chris handed the D-Type over to Andrew Smith, Chris in turn was then ready to take over from Alex Buncombe in the Lister for the second half of its race. Leaving the car out as long as possible before coming in to swap drivers, Alex created enough of a lead to maintain the Lister’s position and from there Chris maintained the momentum crossing the winning line a solid 12 seconds clear of the second placed runner. Unfortunately, for the D-Type things didn’t go quite as to plan instead being pushed wide by a slow back-marker and thus resulting in a precautionary pit stop to check for any damage. Although not having sustained any damage the D-Type finished the race a lap down on team- mate Alex. 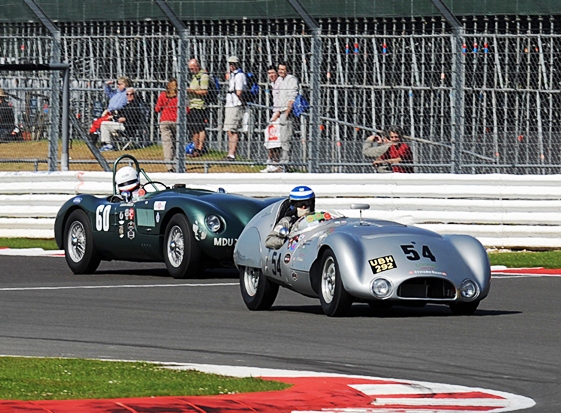 The Cooper T33 of John Young and Andrew Smith took victory in the second of the weekend's Woodcote Trophy Races.

The final race of the day and the weekend was the second of the two E-Type Challenge races. Continuing his strong performance of the weekend, Alex Buncombe again performed an outstanding race and without missing a beat, he roared the E-Type home to take another flag to flag win.

With another race weekend under the ever experienced belt of JD Classics, the Silverstone Classic 2012 will most definitely remain one of the most poignant, producing four victories and one second placed result. Such results are a true testament to the ability of both team and drivers which contribute to the ever flourishing competition department at JD Classics.