On the 10-12th August, JD Classics returned to Nurburgring having not raced at the famous German circuit since 2002 to take part in the 40th running of AvD’s flagship event, the Nurburgring Oldtimer. Located in the Eifel mountains, the Nordschleife track is world famous for its demanding nature and was aptly dubbed “The Green Hell” by Jackie Stewart. A staggering 14 miles in length, the circuit has distinguished itself as a track known to defy even the most experienced of racing professionals. JD Classics’ return was as part of Jaguar Heritage Racing and we couldn’t have picked a better year as the weekend was blessed with a bout of gloriously hot weather. The team entered two E-Types, a MK 2 and a C-Type, the MK 2 of which arrived freshly prepared for the most challenging race of the weekend, the marathon race which saw competing cars endure a gruelling 3.5 hour race around the Nordschleife circuit. Driving for Jaguar Heritage Racing was Alex Buncombe, Chris Ward and Frank Klaas. Alex in particular faced another busy race weekend taking part not only in both E-Type Challenge races but also in the driver’s seat of the famous ex-Fangio C-Type in which he has dominated many of this year’s Heritage racing events, most notably his impressive victory at the Monaco Historique back in May. 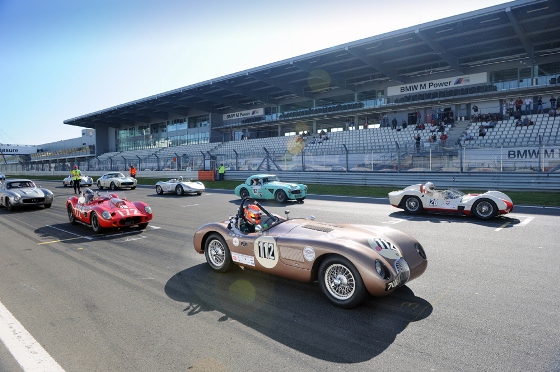 The ex-Fangio C-Type lines up on the front line of the grid ahead of the '60/'61 Sports and GT Car Race.

Friday saw qualifying take place and with cars qualifying on both the Grand Prix and Nordschleife tracks the JD crew split between the two in order to provide optimum support. A busy qualifying session however was only the beginning of what was set to be a non-stop day as the Mk 2 prepared to face the pending marathon race. Alex Buncombe took to the driver’s seat for the first leg and after a gruelling 90 minutes handed the drive to Frank Klaas. Chris Ward completed the final leg maintaining the consistent performance and pace set by his team mates running in a strong second in class until a fuel pump problem struck a mere two laps from the end. In spite of this, the MK 2 finished in a very credible third in class.

Having qualified on pole for the first of the weekend’s E-Type Challenge races the team went into Saturday’s action on a high and they weren’t disappointed as Alex drove an unstoppable race and led the 20 strong grid of E-Types from start to finish, taking the chequered flag. 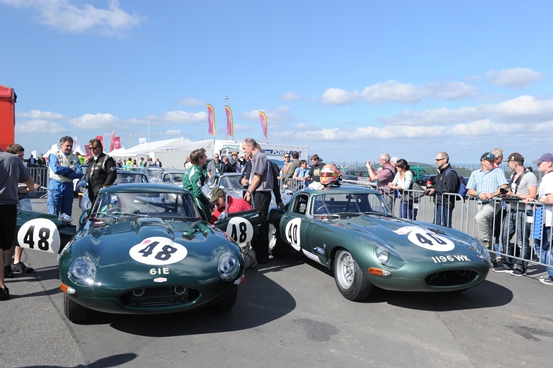 Both E-Types being prepared ahead of the weekend's E-Type Challenge round.

Next to take to the track was the ex-Fangio C-Type in a 60 minute pre ‘60/ '61 sports and GT car race. Having qualified in fifth position, the race adopted a classic Le Mans style start much to the delight of the heaving grandstands with drivers running across the track to their cars before reassembling to come through for a rolling start. Commencing just before 8pm, the race would finish in the dark thus making conditions around the already unpredictable track all the more testing. However, these conditions fazed neither Alex nor the C-Type as they finished the race with an impressive class win and fifth overall. The second of the pre ‘60/’61 and GT car race took place on Sunday this time a shorter race of just 30 minutes. Alex and the C-Type performed strongly yet again and finished fifth overall and first in class. 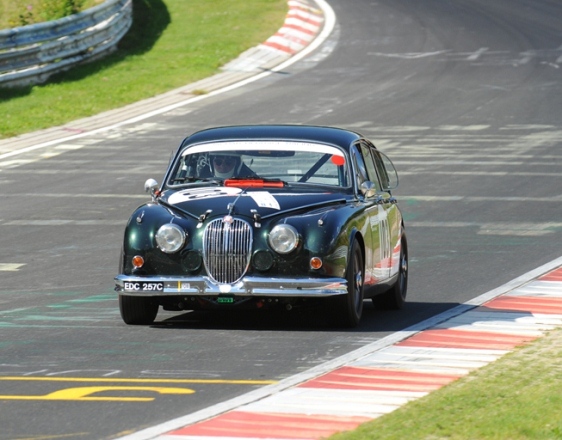 The competition MK2 Racer took to the gruelling Nordschleife track for the weekend's Marathon Race.

The second of the two E-Type Challenge races on Sunday signified the end of another busy race weekend with Alex Buncombe back in the saddle once more. Victory in Race 1 meant that Alex and the E-Type sat in pole for Race 2; however a first corner tussle sent Alex into a spin temporarily setting the E-Type back to 4th place. This was to be a short lived set back as by the end of the first lap Alex was back in his rightful place sitting pretty at the front of the pack. Despite sustaining some bodywork damage and a rubbing tyre from the knock, a gutsy drive from Alex paid off as he maintained his position to complete a well-deserved double victory and a weekend of both class and overall wins for Jaguar Heritage Racing at the Nurburgring Oldtimer.