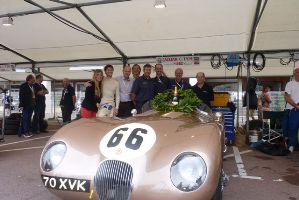 Synonymous with glamour and elegance, Monaco provides the picturesque backdrop for the Monaco Historic Grand Prix. Organised by the Automobile Club de Monaco, this Grand Prix is widely regarded as one of the World’s greatest historic events. A celebration of cars that raced on this glorious race circuit between 1929 and 1984, the Monaco Historic pulls in the crowds thick and fast to watch these period cars cling to each corner and curve of this complex but exciting road circuit. Taking place every two years, 2012 was the eighth Grand Prix de Monaco Historique to take place and was jam-packed with an assortment of cars of which had raced on this historic circuit over the years; a visual spectacle which drew historic racing enthusiasts the World throughout. With such excitement occurring both on track and within the luxurious Mediterranean surroundings of Monte Carlo it is no wonder that Monaco Historique attracts such a large turnout on a biannual basis.

The first race of the announced Jaguar Heritage Racing programme, JD Classics was honoured to be selected by Jaguar to supply, prepare, maintain and support Jaguar Heritage throughout this year’s historic racing calendar and what better way to promote the importance of heritage racing than with one of Jaguar Heritage Racing’s most famed competitive car, the ex-Juan Manuel Fangio C-Type. Prepared and raced on behalf of Jaguar Heritage, the C-Type took part in the weekend’s Serie C: for Pre-1953 Sports Prototypes race on a typically hot Mediterranean Sunday. Having qualified a clear first which saw him claim pole by a massive four seconds, our C-Type and ever experienced driver Alex Buncombe lined up at the front of the grid ahead of Sunday’s race with Patrick Blakeney-Edwards in his Frazer Nash Le Mans Replica Mk 2 and Carlos Monteverde in his C-Type lined up in second and third. 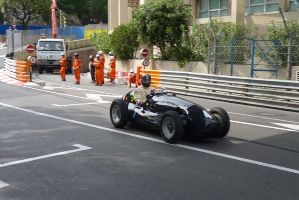 However, once the lights turned green Buncombe and the C-Type dominated the entirety of the race and took the chequered flag with a sizeable lead ahead of John Ure also in a Frazer Nash Le Mans Replica and Carlos Monteverde who completed the podium line up in third. Describing the car as “the best C-Type in the World”, Alex Buncombe praised JD Classics for their professional preparation of the car “The team and mechanics did a fantastic job preparing the car, its super quick and it ran like a dream throughout the weekend”. A promising start to JD Classics and Jaguar’s partnership, JD owner Derek Hood echoed the potential which lies ahead for heritage racing in 2012: “This was the perfect start to our new partnership with Jaguar. The whole team at JD Classics is so proud to represent Jaguar and be part of this historic debut win”.

JD Classics’ 1952 Connaught A-Type also took part in Serie B: Pre-1961 Grand Prix and Formula 2 cars. A seasoned professional, the Connaught has an impressive race history and was even raced by Sir Stirling Moss in period. A mixture of rear and front-engine cars, competition on-track was nothing short of fierce. As they all lined up on the grid, race favourite Duncan Dayton sat on pole position. A veteran of the Monaco Historique, Dayton has won a record ten races at this prolific event making him a fearsome opponent. However, this was not to be the race in which he would claim his 11th Monaco victory as a tussle for first place with the Cooper T53 of Roger Wills saw Dayton spin and was subsequently forced to retire leaving Wills to claim an unrivalled victory. The Connaught ran strongly and consistently throughout the race and finished a respectable fourth in class. 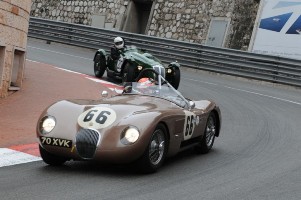 Having driven a faultless first race as Jaguar Heritage Racing, both JD Classics and Jaguar have set a high standard of performance with the C-Type of which we hope to benchmark all future heritage race events. Having already scored a clear victory for Jaguar Heritage Racing only reinforces the joint effort and world class expertise of JD Classics, the backing of Jaguar and the talented driving of Alex Buncombe which saw such a dominant victory from our very special ex-Fangio C-Type. Having set such a precedent so soon, we take this as a positive sign of things to come.