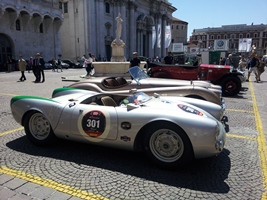 A vast crew were flown to the heart of Italy ahead of this year’s Mille Miglia which saw Jaguar and JD Classics join forces as part of Jaguar Heritage Racing. Between them, a combined 11 cars took part all of which were prepared ahead of the event at JD Classics HQ in Maldon, Essex. It is fair to say that the pressure was well and truly on to perform to the highest of standards on Jaguar Heritage’s second historic outing.

Before the action could begin, formalities such as driver signing on and scrutineering had to be adhered to. Needless to say that with 370 odd cars taking part, this took a fair bit of time. Once completed, service crews made their final preparations carrying out last minute checks and loading support vehicles with the necessary equipment to service and maintain the cars over the gruelling 1000 miles which lay ahead. As the competing cars made their way to Piazza della Loggia in the heart of Brescia for the official sealing, service crews and competing drivers alike prepared themselves for the long journey. Once completed, cars made their way to the start line, our 11 entries consisting of 2 C-Types, 4 XK120s, 1 MK 7, Mercedes Gullwing, Porsche 550 Spyder, Cooper T33 and completing our Heritage line-up was a special 1954 Lincoln Capri. Not the regular sort of car you might expect to see at JD Classics but nevertheless the pride and joy of an American client and a beautiful example. 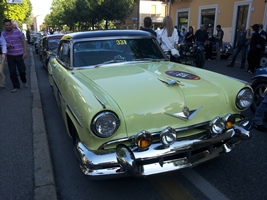 The first leg of the 1000 mile journey took the cars from Brescia to Ferrara, a four hour night time run thus easing all involved into the three tough days of racing ahead. All 11 JD and Jaguar cars arrived safely in Ferrara allowing service crews to check vehicles for the next day’s longer more challenging run.

As the sun dawned on Friday morning, the participating cars were all lined up for the start of the Ferrara to Rome leg, the first car of which scheduled to depart Ferrara at 8am. The day’s run to Rome would see the car’s negotiate various time trials through the rustic landscape of Italy which were all completed successfully by our 11 cars. A longer leg than the previous day, the cars arrived in Rome in darkness yet again emphasising just how long had been spent on the road. Upon arrival in Rome the crews were on hand to service and prepare the cars for the third and final leg. This was by far the longest and most demanding stage having to face the gruelling 500 mile return trip back to Brescia. 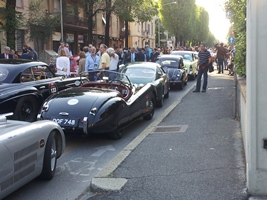 With the first car arriving over the finish line at 10pm, it truly is a testament to the longevity put into the build of a classic car such as the ones which take part in the Mille Miglia and complete the course successfully. However the support crews and drivers didn’t seem to be fairing quite as well by the time they reached the finish line having endured a tough few days with minimal sleep. Indeed the Mille Miglia is not for the faint-hearted.