Known most famously for its 24 hour race, Le Mans is now home to the Le Mans Classic. Now in its sixth year, the biennial event has increased in popularity exponentially over the years with recent spectator numbers surpassing the 100,000 mark. The ever increasing demand for events such as Le Mans Classic highlights the spotlight which historic racing demands, now even more so than ever. This year’s event saw a staggering 400 cars dominate the Le Mans circuit of La Sarthe for what was set to be a truly exciting spectacle of period racing. In authentic Le Mans fashion, competing cars were divided into grids dependent on year of manufacture as they attempt to recreate the racing experience of the golden era of motorsport. 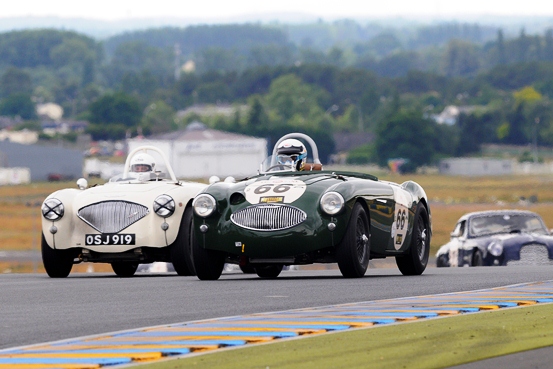 Participating cars were divided into six grids: Plateau 1 consisted of pre-war (1923-1939) cars with examples such as Bentleys and Bugatti’s governing the line-up. Plateau 2 was made up of post-war cars from 1949 to 1956 and so the grids continue, grouped chronologically from 1923 all the way up to 1979. By grouping grids in this manner allows cars to compete within a fairly matched field and with the cars with which they would have originally raced at Le Mans.

Although the main attraction and very much the heart of the weekend, the races were not the only treats for motor enthusiasts to get their teeth into. Le Mans Classic also saw a variety of over 800 cars take to the track between races as part of marque parades, not to mention a tribute to the late Carroll Shelby whose life’s dedication to cars produced the famous Mustang Shelby and AC Cobra. With this and an array of cars on display around the circuit even the most discerning enthusiasts would have come away with their appetite well and truly wetted. 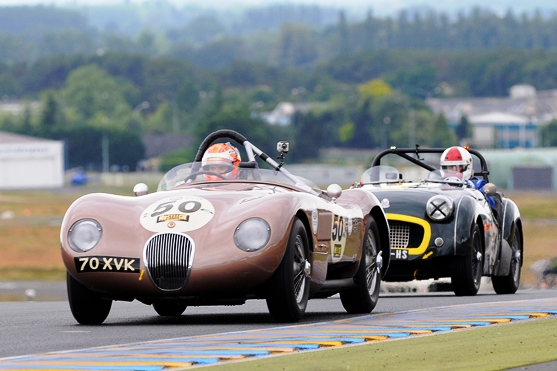 Widely regarded as one of the World’s premier classic car specialists, JD Classics’ competition race department jumped at the opportunity to participate in the sister race to the famous Le Mans 24 hour, entering not one but four of their historic competition cars to take part. Our 1950 ex-Roy Salvadori XK120, 1955 Austin Healey 100 S and 1952 ex-Fangio Jaguar C-Type all lined up as part of the post-war grid (Plateau 2), facing competition from a packed field of Aston Martin’s, Austin Healey’s and Jaguars. Having performed faultlessly at this year’s Monaco Historique, Alex Buncombe and the C-Type set their sights on repeating the success of their victory with another fruitful weekend at Le Mans as part of Jaguar Heritage Racing. 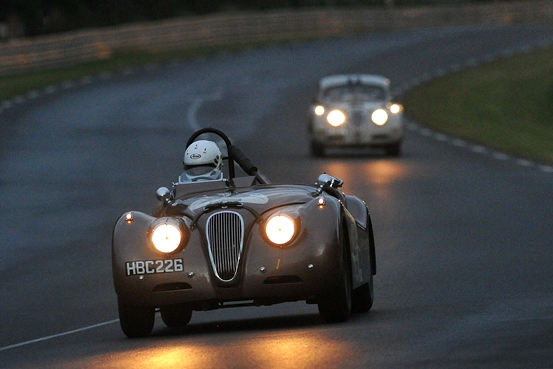 The ex-Roy Salvadori XK120 takes on the Le Mans circuit in the dark.

Each plateau is made up of three races, each race result contributing to a car’s overall classification. All three JD cars participating in Plateau 2 performed consistently, the C-Type of Alex Buncombe in particular which crossed the line in 1st, 1st and 3rd respectively. The Austin Healey of John Young and the ex-Roy Salvadori XK120 of JD Classics MD Derek Hood both produced sterling results placing themselves firmly within the top 30 in each race with the Jaguar XK120 finishing an impressive 12th overall in Plateau 2.

Plateau 3 saw our 1958 Costin Lister perform equally as impressively to its earlier JD Classic peers crossing the line in both race 1 and 2 in first position. Despite qualifying pole for Race 3, a water pump failure meant that the Lister did not finish the race thus hindering a hat trick of first positions for which the Lister looked set. 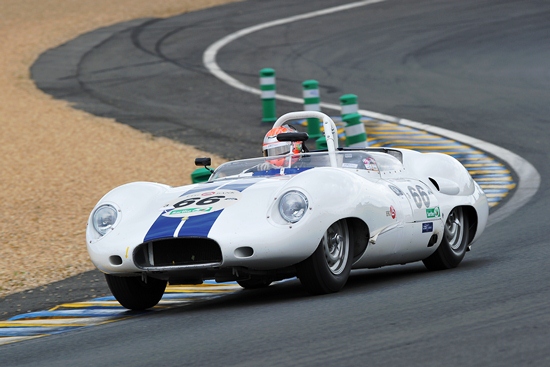 The 1958 Costin Lister also performed well throughout the weekend.

Notorious for its large grids and fierce competition, the Le Mans Classic is considered the height of competition within the historic racing world with many cars buckling under the pressure of a demanding weekend of racing. JD Classics performed second to none dominating the top quarter of each plateau without fail; the C-Type in particular over shadowed its fellow contemporaries with flawless performances in all three races within Plateau 2. Our Costin Lister also proved a shining example of the impeccable work produced by JD Classics having dominated two of the three races in Plateau 3. With yet another weekend of consistently good race results under their belt, JD Classics prove they are a testament to the dedication and professionalism which makes them one of the, if not the best in their field of expertise.