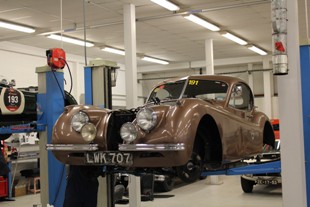 JD Classics have been bestowed the honour of preparing and supplying support to three cars from the JDHT (Jaguar Daimler Heritage Trust). The cars are currently being prepared at JDs headquarters here in Maldon. All three cars are set to take part in this year’s Mille Miglia, a 1000 mile route which takes entrants down from Brescia to Rome and back again on a three day trip through the rustic landscape of Italy. 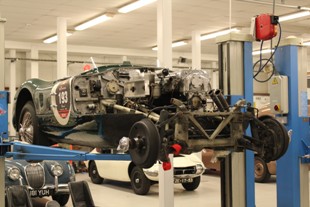 All three cars are significant in their own right but the 1952 Jaguar XK120 ‘LWK 707’ is of particular historical interest. Otherwise known as the record-breaking ‘7 days and 7 nights’ XK120, this famous fixed-head coupe covered a staggering 16581 miles over the period of 7 days and 7 nights averaging at a speed of 100.31 miles per hour. It is clear to see from this just how this XK120 came to be set in such historical automotive stone.

The second of the Mille Miglia trio is a 1953 Jaguar C-Type, chassis number XKC 045 which has also taken part in the Mille Miglia in period. In 1953 and under the ownership of Mario Tadini, this C-Type was entered in the Mille Miglia with Tadini and Italian racing driver Franco Cortese behind the wheel. A Jaguar XK120 open two-seater completes the trio. 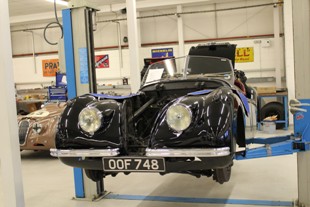 When the cars have finished preparation, JD Classics will provide support crews for them over the gruelling 1000 mile circuit. To be asked to participate and provide support for three such historically steeped cars is truly an honour for all involved at JD Classics. We look forward to working alongside the Jaguar Daimler Heritage Trust in providing this support for these first class classic race cars throughout this year’s Mille Miglia.