A long established event on the racing calendar, Oulton Park’s annual Gold Cup meeting has regularly attracted large crowds since its inauguration almost 60 years ago in 1954. The JD Classics competition department made the long journey to Cheshire with the E-Type from their ever expanding racing fleet. A sell out event year after year, the Gold Cup meeting embraces the true spirit of the 1960s and 1970s with a variety of trade stands, vehicle displays and period fairs to recreate all the atmosphere of the time. Similarly to events such as the Goodwood Revival, spectators are encouraged to dress accordingly and adopt period appropriate attire to add to the authenticity of the event.

Qualifying took place on Saturday and with the rain holding off, our Jaguar E-Type took to the track to qualify for the last round of this year’s E-Type Challenge series. Alex Buncombe drove the E-Type to pole position by a clear second despite only securing four clear laps throughout qualifying placing Alex and the E-Type in a strong position ahead of Sunday’s first E-Type race. 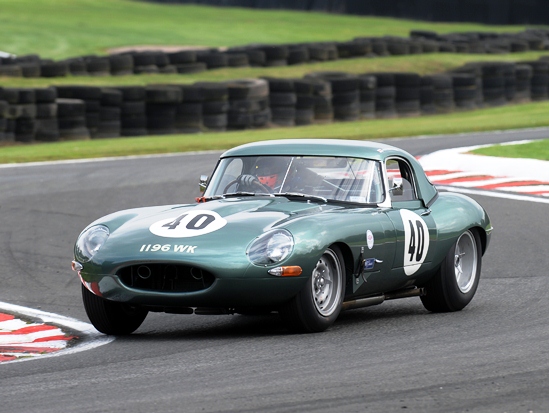 By Sunday, the weather conditions had taken a turn for the worst with heavy showers making driving conditions treacherous. Race 1 of the E-Type Challenge saw Alex Buncombe get off to an uncharacteristically slow start falling temporarily into 3rd position. However, true to form, Alex was back up into 2nd by the end of the first lap and now in hot pursuit of the front sitting car. Sure enough by the end of the second lap, Alex had regained the lead of the ferocious field all vying for victory in the season’s concluding E-Type Challenge round. As Alex looked set for victory, a gearbox problem forced him to pit unexpectedly. The team, not wanting to compromise the car ahead of Monday’s second E-Type race took the decision to withdraw the car from the remainder of the race.

With a new gearbox, the JD E-Type started the second race from the back of the grid due to its unexpected withdrawal from Race 1. A far cry from the previous day’s race, Alex drove an unrivalled race, a flying start moving the E-Type from last place to 2nd position by the end of the first lap alone. After a brief dice with the Demon Tweeks E-Type of front runner Jon Minshaw, Alex took the lead and began to pull away from the field. After a perfectly executed mandatory pit-stop by the JD crew, Alex continued to extend his lead over the remaining laps to eventually take victory by a solid 20 second gap. This win proved to be the perfect end to a successful E-Type Challenge series for Alex Buncombe achieving seven out of a total of eight wins this year.