After a champagne reception, guests retired to the club’s Mountbatten room where motoring journalist Simon Taylor would host the evening’s proceedings. Curator of vehicles for Jaguar Heritage, Tony O’Keeffe took to the stage to explain a little bit about the E-Type Challenge series. Graham White of the HSCC spoke about the exciting races which had taken place this year and praised all involved. Event sponsors were also invited to say a few words about their involvement and, as one of the main supporters, JD Classics spoke of this year’s exciting and hotly contested series praising the beautifully restored and maintained racing E-Types which took part. JD Classics also thanked all organisers and marshals without whom the series could not have taken place. 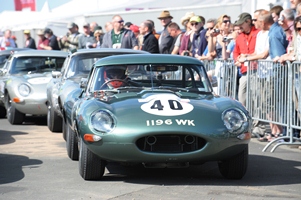 Jaguar stalwart Norman Dewis also attended having spent the last three weeks in America on Jaguar duties and spent some time talking about the ground-breaking work he did during his 36 years as Jaguar’s chief development engineer.

The finale of the evening was the announcement of this year’s E-Type Challenge winners with Norman Dewis returning to centre stage to present the awards. With Alex having won seven out of the eight races entered including the last race at Oulton Park Gold Cup where he started from last position to come through to take the victory, this insured he was crowned the winner of Class A. This year, the overall winner was Roger Cope from Class B.

Having run in strong contention for a second year running, JD Classics look forward to competing once again in the E-Type Challenge series in 2013.